Half a century of Woo: a book about the monkey rock, Fred, drug policy and parties

Bartenders in the Woolloomooloo in 1974.

Her Majesty’s First Disco bar, The Lady, the Hmed, the Woolloomooloo or simply "the Woo": on Wednesday, the first student disco in the Netherlands became half a century old. To celebrate the anniversary, a book with the modest title "Woolloomooloo: the first fifty years" was launched on Saturday. Co-author Ronald Giphart received the first copy.

The idea of writing such a book did not come from the four-person board, or the Petit Comité, of the Woo itself. An older generation of enthusiasts of the "For all students"-club, as the Utrecht discotheque is also described, took the initiative. “They have made contact themselves to realise this book. Everyone has experienced legendary evenings here, of course; half of them have met their wives or husbands here.” These are the words of Ludo Schot, current president of the Woo. 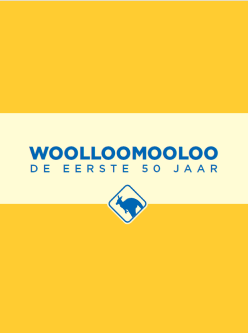 In the end, the book was edited by Michiel Hegener. This alumnus of Utrecht University also wrote a book in 2016 about the 200th anniversary of USC-society PhRM. Hegener received help from various other authors, including Giphart. He wrote a contribution about his introduction to the love life in the Woo, previously published in Het feest der liefde (The Feast of Love) from 1995.

The 258-page book is full of old (and recent) stories, anecdotes, facts, photos and interviews. For example, with the iconic porter Fred Prang, who had been at the door for forty years, and cleaners Piet and Erna, who since 1986 have been faithfully scrubbing away the stale beer and the other dubious remains in the club every morning.

For those who don't know the club: the entrance to the Woolloomooloo is hidden in an alley next to het Gele Kasteel (the Yellow Castle); the society of the Utrechtsch Studenten Corps (USC; Utrecht Student Corps) at the Janskerkhof. The Woolloomooloo falls under the financial ledgers of the USC and the guys who run the club are members, but you don't have to be a member to enter the Woo. Whether the Lady really was the oldest student disco in the Netherlands is debatable, says Schot: “Club HiFi in Leiden came about at the same time. But I think HiFi was more private than we were.” Woolloomooloo was also one of the few clubs that was open every day of the year and had no closing time. Nowadays, the Woo is closed two days a week: on Tuesdays and Sundays.

Jacket-and-tie
The idea behind the creation of the Woo was to reduce the barrier between members and non-members. The building, which in the Second World War still functioned as a bunker for the German occupiers, was taken back into use by the USC after the war. The idea was suggested to start a "mixed society" in the space that would later become the Woo; a place where both members of the corps and non-members could meet. That mixed society was later called the "Rootie Tootie Club", and not much later it became the Woolloomooloo (derived from a neighbourhood in Sydney, Australia) as we know it today.

Nowadays, you only need a valid student pass and an ID card to get in, but a student in a track suit is refused, just like students in a suit. “We present ourselves as a hip club, and our house rules state that you must dress accordingly. Everyone must take off their jacket-and-tie by the door, including the senate (of the USC, ed.). If everyone is going to wear a suit in here, you would not feel welcome if you wear something else. "

"We were all 100% focused on having the Woo for “knorren” (someone who doesn’t know the rules of the corps). If you came in with a jacket-and-tie, as a corporate 'knor', you were soon in trouble. [...] Those people were pushed back: you are here, but this is not your property, which made it such an economic success, and visitors saw that too: they knew that us bartenders were members of the corps, but we were did not display this very explicitly, not the bartenders, and certainly not the DJs."
By Albert Roëll, chief bartender from 1982 to 1985, from 'Woolloomooloo: the first fifty years', page 56

For all students?
The ratio of members to non-members is different per evening. The Thursdays have a very mixed audience. This is due to the "Dolle Donderdag" (Crazy Thursday) that has come over from the non-association-bound "Dolle Dinsdag" (Crazy Tuesday) in Amsterdam. "You see the audience of the Thursday come back on other evenings as well, once they find that it is just fun here and that members of corpora are not stereotypically arrogant guests."

The Petit Comité also strongly supports the "For all students" principle, says Schot: "The Woo is a meeting place. It does not matter to us which association you are from or that you are a member at all, from the moment you enter, everyone is just equal.” And MBO students? "They are not students but pupils, so they do not come in." Striking, because Minister Van Engelshoven thinks otherwise. Next academic year, it will even be included in the law that MBO pupils are actually students. For now, the Petit Committee has no plans to adjust the policy.

"The anecdote of how we threw Prince Willem-Alexander out of the club because he and his friends threw beer at Lois Lane, and how Fred let him in again and the future king eventually thanked me but above all embraced me, totally wasted... Has that lost its shine already, or can it be told again?"
By Robert Vlutters, from 'Woolloomooloo: the first fifty years', page 165

Over the years, a number of well-known people have been refused at the door because they were not students. David Bowie, for example. And René Froger. "We recently refused someone from Love Island," laughs Schot. Those who were allowed inside include Ramses Shaffy, Marco van Basten, Jules Deelder, Linda, Roos & Jessica and members of het Goede Doel, Golden Earring and Simply Red. Now, there are fewer famous Dutch citizens, Schot says, because of social media. "If you do something crazy now, it will be online immediately, so you will not get away with it." Rumour has it that Herman Brood could even be found behind the turntable several times. Former USC member Bakermat also played in the Woo a number of times, although he was rejected by the DJ committee in 2010 because of his appearance and choice of music. In the summer of 2013, Bakermat scored a big hit with the single Vandaag (One Day). 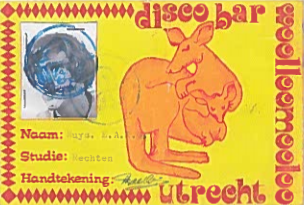 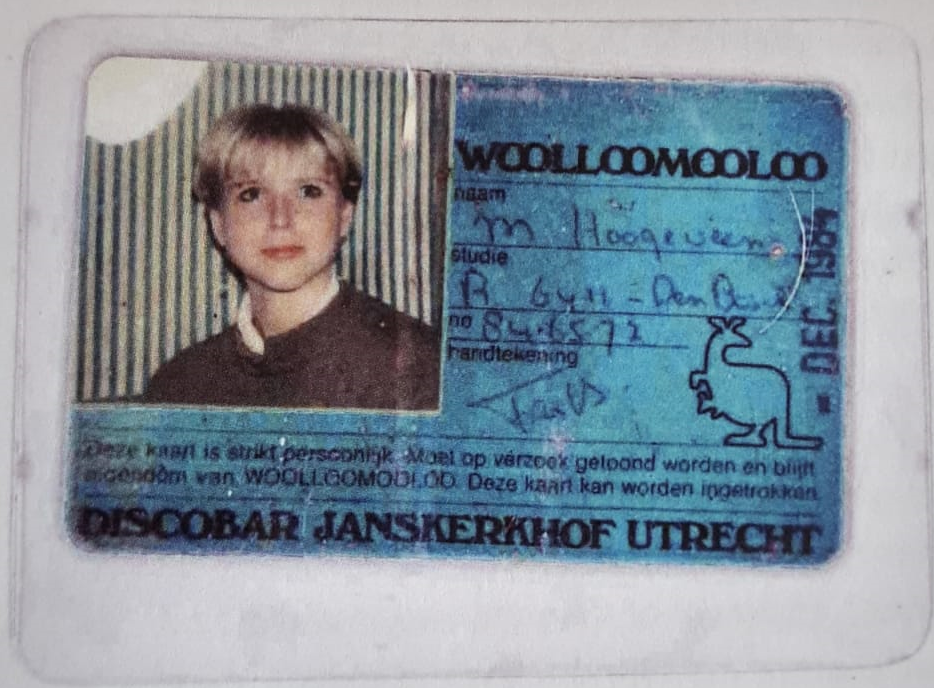 Woo pass: left of a man, right of a woman.

Passes
Although a student card and ID are now sufficient to come in, this has not always been the case. You used to need an iconic Woo pass. The passes, a nice souvenir for many a former student in Utrecht, were introduced by porter Fred Prang. It was one of the first pass systems for clubs throughout the Netherlands, and prompted criticism. In 1984, it even ended in a lawsuit: women were often allowed inside by smiling sweetly, while men had to show a pass. Discrimination, was the conclusion. “The passes also cost money and have resulted in large queues. They were abolished in 2013. Now it's easy: everyone has a student card and does not have to buy an extra pass. That also lowers the threshold for people from other cities who are in the Woo for the first time," said Schot.

Drug hole
Fred Prang received royal honours in 2004 for his door policy and commitment to security in the Utrecht hospitality industry. Because of his appointment as a Member of the Order of Oranje-Nassau, he was also nicknamed "Her Majesty’s First Knight". For forty years, Fred stood at the door as the figurehead and face of the Woo. In 2017, he quit and the boys of the Woo organised a big party for the whole city to say goodbye. The current "guardians of the Lady" are Richard and Jimmy, who have been working at the Woo for 27 and 10 years respectively. 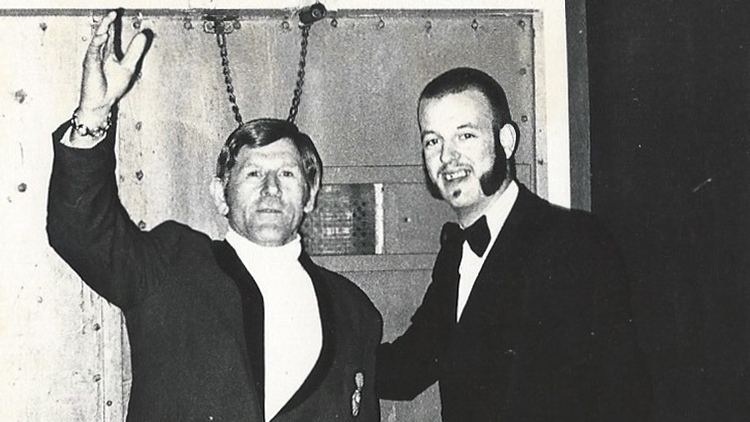 Fred with Toon Zwezerijnen in 1974. The dark spot in Fred's teeth is from the golden star which he had placed from his first earnings in the Woo. (from: 'Woolloomooloo: the first fifty years')

Fred was hired in 1973 to counteract the then prevailing drug culture. "In the early years, the scum from Utrecht still approached the Woo, which led to drug trafficking and fights," says Schot. Due to the doormen and a strict policy, this decreased, which added to the atmosphere. The zero tolerance drug policy is now being properly adhered to, as far as Schot knows. “Of course, there are always things that you do not see, but over the years it has become very clear that it is not allowed here. We also have drug tests available. If we have suspicions, we will take a test, and if people refuse the test in advance, you know enough and they have to leave.”

Around 1971, the Woo had to close its doors for a few months due to the grim atmosphere and drug culture. That happened a number of times later: “In 2009, we had to close due to a student party that got out of hand. A minor had drunk alcohol," says Schot. The Woo also had to close for three months in 2015, after a boy from Bunnik broke his eye socket due to pushing crowds at the entrance. "Everything was revised then, and we prepared a new safety plan in consultation with the fire department."

The entrance to the building was adjusted for safety reasons. De Woo has long been known for its little-changing and timeless interior, but the halls were completely stripped and provided with new interiors in 2000, albeit for the first time. Think of: a different DJ booth, better light and sound installation, different bars and new tapping systems: "completely moron-proof".

Monkey Rock
Part of the interior that has always remained is the well-known monkey rock; traditionally a semi-circular, wooden bench with a high backrest, nowadays more a small stage with a metal pole. The myth goes that everyone who climbs to the monkey rock is open to an adventure that evening. The current monkey rock was newly built last summer. Schot laughs: “The previous one had collapsed. It was a bit rotten ... and used a lot.”

These days, the myth is also taken with a grain of salt, he says. "It is no longer a sign of ‘sale’, the monkey rock is just fun to get up at a party. At the opening party of our lustrum last September, you saw some older people heading for the monkey rock right upon entering as well. It was full all evening. And if we have drills here with the fire brigade and the police, they all know what the monkey rock is, that's just fun.” 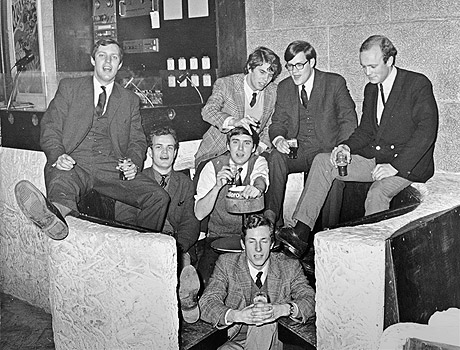 And what else makes the Woo so attractive for students? Maybe the beer. Heineken for 1 euro 40, from the 5000 litre beer tank downstairs in the basement. “In the beginning, the profits of an evening went to bartenders and DJs themselves, and tips went into the tip jar in the pergola above the bar. That was quite profitable. Now, we work with coins instead of cash. And the entire business operation has changed; it has become much more professional."

Everyone was welcome at the book presentation Saturday. The reception was held in het Gele Kasteel, "because it just stinks in here", and the book could be purchased for a reduced rate of 30 euros. When purchasing via Bol.com or Bitscan, the price rises by five euros, due to shipping. For all students, there are also other lustrum parties in the pipeline: February 23 is the unveiling of the lustrum theme, and from May 28 to June 1 the lustrum week is full of large parties that are free to enter. 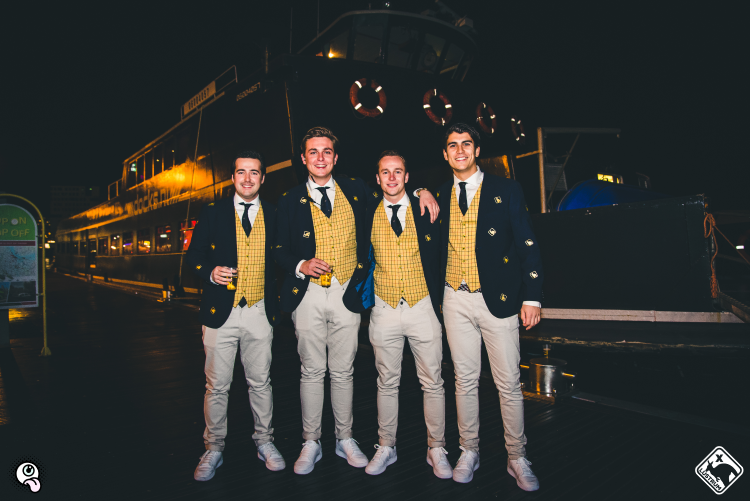 The current Petit Committee, with Ludo Schot as the second from the left.