A PhD supervisor who threatens to discontinue your collaboration if you reject his advances. A fellow convention visitor who grabs your butt. A teacher who winks at you way too often. Jokes among colleagues about your appearance. Sexual harassment is not just an issue in Hollywood, but within the university, too. How is the situation at the UU?

After American film producer Harvey Weinstein (responsible for, among many others, Pulp Fiction) was publicly accused of sexual harassment by several women, thousands of women took to social media to share their own experiences with sexual harassment. Story after story was shared under the hashtag #MeToo – first by people working in media, later also by women working in academia. 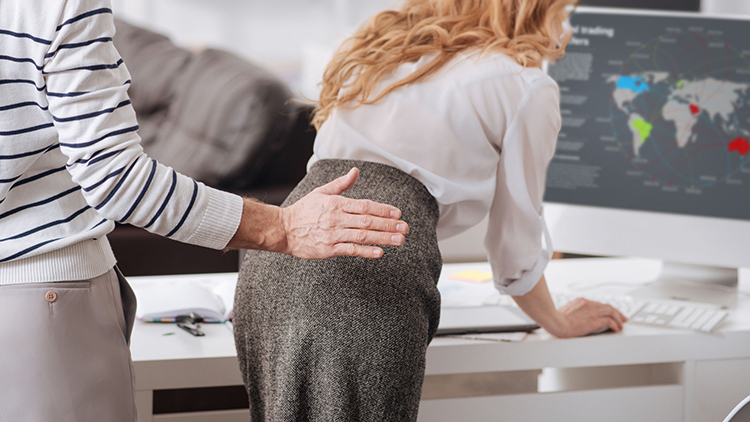 “I want to fuck you”, the teacher said
Evers found support in philosopher Stine Jensen, who wrote that her decision to quit her position at the VU University was made after experiencing harassment by a professor. “He didn’t grope my breasts or touch my butt, but there was definitely physical intimidation: standing too close to me, yelling, aggression, threats, humiliating and belittling sexist remarks.”

More examples can be found on the website Athena’s Angels, a group started by four female Dutch professors with the goal of uniting women in science. The website is collecting the stories to show ‘how and why women often feel underappreciated and less than welcome in science.’

“During drinks at a convention, I’m standing amongst the crowd near the bar to order a drink. Someone squeezes my buttocks, hard,” one woman writes. Another: “Years ago, after dinner with a group of foreign guests, a much older teacher kissed me on my mouth and said: ‘I want to fuck you’.” A third woman says that since she’d experienced a similar situation, she “doesn’t feel comfortable staying in the office after most people have left.”

To Jeanette van Rees, counselor at the UU, it comes as no surprise that many of these incidents take place during conventions or business dinners. These situations are simultaneously work-related and not work-related, and that can be confusing. “It can be great fun as a teacher to join your students for a beer, but you have to watch out; the teacher-student dynamic is still there. Once you start mixing private life with work, hierarchical relationships start to blend. Many people aren’t aware of that.”

Sexual harassment is more than groping breasts
Anne-Marie van Gijtenbeek of the UU’s Women’s Network says it’s not always about clear-cut inappropriate behavior like a fellow visitor at a convention grabbing your butt. “Inappropriate behavior is often more subtle, and consequently harder to pinpoint.” On the Athena’s Angels website, a teaching assistant tells a story of a professor asking her colleague how he was supposed to be able to concentrate when he was sitting next to such a beautiful woman. And another woman, politely thanking a group of people for having her present at the meeting, received a thorough once-over and the comment that the board liked having people who looked like her.

“Women generally feel sexist jokes and unwanted compliments about their appearance are inappropriate at work, and don’t feel comfortable in a working environment where that happens regularly,” UU professor and Athena’s Angels co-founder Naomi Ellemers writes in the Volkskrant. “The damage isn’t limited to the women who are treated in this way. In a work environment where this kind of behavior happens often, even people who aren’t the direct victims of it feel less comfortable, and less motivated to perform well.”

Van Rees agrees with Van Gijtenbeek and Ellemers that sexual harassment is often more subtle than people think. “Some people are overly friendly, come too close, wrap an arm around someone’s shoulder too often, or just don’t notice the effect of their choice of words.” She explicitly warns of behavior that at first may not seem too inappropriate, but has the potential to cross the lines because it’s an intrusion into someone’s private life. “For example, many people are still replying to work emails after working hours, because everyone’s always reachable. But you shouldn’t be doing that at 10 PM. That’s crossing a line, because you’re suddenly ending up in someone’s private life.” If a teacher is emailing his student at a time like that, it may result in questions like: “Why is this teacher emailing me now? Is there a hidden agenda?” 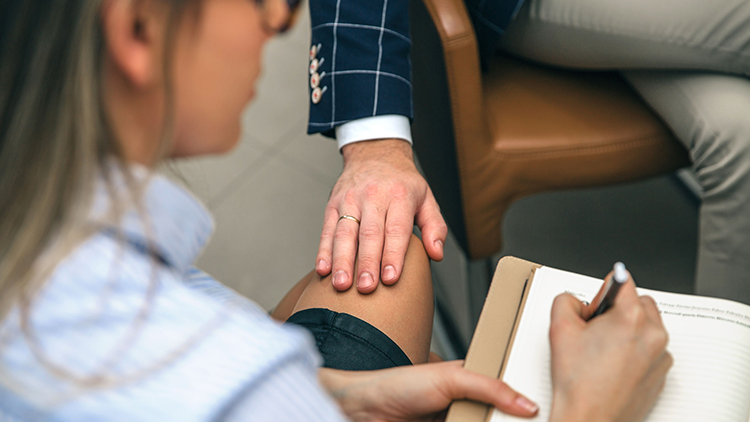 Sexual harassment at the UU
According to research conducted by the NOS and research bureau No Ties among people between the ages of 18 and 35, inappropriate touching happens at school or university in 5 percent of cases. An American study conducted among women in science states that over 30 percent of them deals with sexual harassment at some point. The UU counselor for inappropriate behavior’s annual report helps to nail down how big that number is at the UU.

The report mentions how many people have reported instances of sexual harassment. Sexual harassment in this case is described as unwanted sexual approach, be it verbally, non-verbally or physically. The report states three reports were made in 2016; one by a student and two by employees. It shows a slightly different situation than other years: in 2014 and 2015, there were four students a year who reported behavior to the counselor, and no employees. In 2012, reports were made by four students and five employees.

But numbers aren’t conclusive, says Faculty of Law dean Annetje Ottow in an interview with the women’s network magazine Pandora in 2016. A similar conclusion can be drawn from the results of the 2017 employee monitor, which state that 10,6 percent of UU employees deal with inappropriate behavior in the workplace. Of those, 7,5 percent are specifically about sexual harassment. In definite numbers, that means 33 respondents or 0,8 percent of the people who filled in the survey. That’s more than in a similar monitor that dates from 2013, when 0,6 percent of employees stated the same. There have been no similar studies conducted among UU students.

Counselor Van Rees can’t say whether the reports made with her are only the tip of the iceberg. She says it’s not unlikely; research from the 1990s shows that most victims of sexual harassment don’t try to find external help, but solve the situation themselves. The research done by NOS and No Ties paints a similar picture: it states that only 2 percent of young people finds help if they experience unwanted touching. The others solve the situation themselves, or get angry.

Dependency makes vulnerable
In the Pandora interview, Ottow says there’s another explanation for the difference: the fact that reporting is a huge hurdle to leap over. This is especially the case in situations with power relations and dependency relations. Van Rees agrees: “It’s harder to stop sexual harassment or to report it, if you’re dependent on that person for your evaluation, or your job. Or if someone has a renowned position within a discipline. It’s harder to report a situation, because you’re more vulnerable.”

American scientists Kate Massinger and Joan Williams of the University of California state that it’s mostly PhD candidates and postdocs who are vulnerable in these power relations. “Their futures depend on their professors’ recommendations.” One story on the Athena’s Angels website is a good example of this: “At a party, my former supervisor asks me to walk to the back with him, to escape the noise. There, he unexpectedly kisses me. I try to talk about in the week following the incident, and he says: ‘I’m in love with you and if you don’t want me, I never want to work with you again.’ I see how my future falls apart.”

Van Rees agrees that PhD candidates are a vulnerable group in terms of sexual harassment, but stresses that the phenomenon isn’t limited to them only. “These things can happen wherever there’s a dependency relation.” The reports she receives come from all layers within the university. She adds that, although the discussion about #MeToo is almost entirely about sexual harassment of women by men, she also receives reports of men who are sexually harassed. 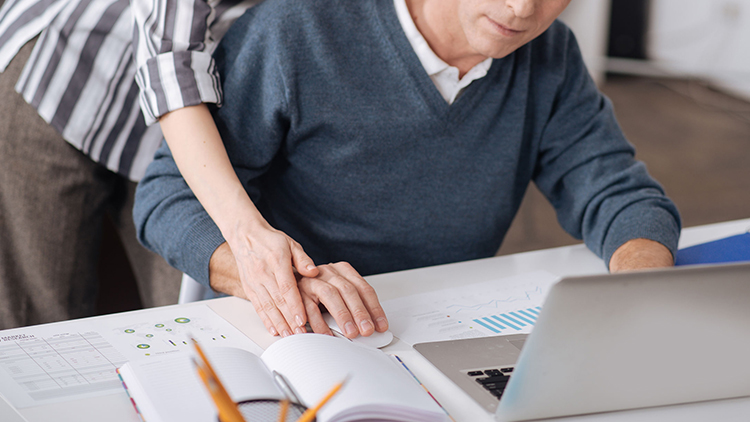 #MeToo – too little, too late?
Professor Vanessa Evers received dozens of reactions on her story about sexual harassment in academia. Some of them asked why Evers hadn’t done anything herself at that moment. Wasn’t talking about it afterwards ‘weak’? Shouldn’t she have defended herself, as she ‘can and should’? Because don’t men feel the freedom to keep behaving this way because they don’t get a ‘slap or a diss’ thrown at them? Perhaps she was projecting that she was the kind of person who was ‘unwilling’ to defend herself? And was offering a massage even sexual harassment?

Van Rees says victims often ask themselves the same questions after an incident. The counselor says it’s hard to expect anyone to be able to respond with a sharp comeback in a nasty situation. “If you’re experiencing something unpleasant, any reaction is possible.” And you can’t force yourself or anyone to respond in a certain way, Van Rees states.

In the example of a sexually charged remark made on the work floor, there are several plausible scenarios. “Most people think: did I hear that right? How am I supposed to take this? Is this a joke? And then they ignore the remark. Others are so startled that they can’t do anything. They’re paralyzed. People – mostly women – often think they were in the wrong somehow. And others get angry. Later, many people will think ‘If only I had…’ but that’s always afterwards. At the time it happens, people are apparently too afraid or surprised. Responding immediately is very difficult. So you can never tell someone: ‘You should’ve responded in this and that way’.”

After the popular #MeToo messages, Van Rees didn’t see an increase in reports on sexual harassment. Members of parliament for GroenLinks, Lisa Westerveld and Linda Voortman, asked the government questions about inappropriate behavior and to what level education should talk about sexual limits and sexually inappropriate behavior. They also asked the minister about the possibility of training counselors and others on talking about limits, consent and sexually unwanted behavior.

Reporting sexual harassment at the UU Utrecht
University has had a counselor and a complaints procedure since 1988. When people report sexual harassment with counselor Jeanette van Rees, this can be followed up by an official complaint against the suspect. The complaints commission inappropriate behavior will study the complaint and advise the Executive Board about what decisions need to be taken. Some reports aren’t turned into complaints. This is the case, for instance, if the inappropriate behavior can’t be proven, because there were no witnesses. Van Rees does keep files on all reports she receives. In that way, official complaints can still be made against a suspect at any time in the future. Van Rees also has the authority to talk to supervisors and senior staff if reports are made about an uncomfortable work environment within a department.

More information what to do in case of misconduct you can find on the UU-intranetsite.
Tags: seksuele intimidatie | confidential counselor | vrouwennetwerk | athena's angels | #metoo