‘My doctor said we were just going to do these treatments’

Eva van Gennep wanted to be a doctor, then she became ill herself. Photo: Simona Evstatieva

You’re a student, breezing through life without a care in the world, and then suddenly, it turns out you’ve got cancer. It happened to medical student Eva van Gennep (26). “I was at a festival one day, and a patient the next.”

As a medical student, you have to throw some mean punches sometimes, unfortunately. During role plays with actors, you learn how to deliver bad news; during residencies, you learn how treatments work and what the possible side effects can be. Eva van Gennep learnt it all at the UU. “But suddenly, I was the one on the receiving end of that punch.”

Did you feel it coming, that punch?
“I think that at first, I was making light of the situation too much, perhaps. In hindsight. For over six months, I’d walked around with a lump on the side of my breast. I thought, that has to be a fibroadenoma. Benign, happens a lot to young people, no worries. That might be one of those typical doctors’ pitfalls: you can explain away so much when it comes to your own health. Additionally, there wasn’t much of a history of breast cancer in young people in my family, I was 24, in the prime of my life.

"Only when my mother and boyfriend urged me to go to the doctor’s, I was referred to a specialist. A few days before I was due to receive the results, in July 2017, the doctor called me. They weren’t entirely sure what it was yet, but I shouldn’t assume it was all innocent, and I should probably bring someone with me to the appointment for my results. That’s when I thought: oh, shit.”

What did that life look like before you got cancer?
“Lots of parties, lots of friends, dinners, I travelled a lot, was a board member for a year. Just a typical student life, I think. But also: lots of studying. I was, and am, ambitious. I thoroughly enjoyed my student life, but I was also busy and always in a hurry. I was rushing all over the place. The day before the results, I was at a festival with friends. Of course the thought did go through my mind then: perhaps I’ve got cancer. But I could also push that away, like yolo, I’ll see what tomorrow brings.”

And then tomorrow came.
“Truly: like the ground falls out from underneath your feet. I cried, and I think I was in shock. The doctor asked if I was open to more information – that’s what they’re supposed to say, I was learning those words in my communication course. Yes, I was. She said it was treatable, that it wasn’t fatal. But she also told me I had to get surgery, chemo, and radiation. My first response was: those treatments… what if I don’t want that? But the doctor shook her head and said I was very young, and that we were just going to go ahead and do those treatments.”

I think I was in shock

Did you come around quickly then?
“Yes, of course you say something like that without thinking, because I was suddenly a patient. It’s really interesting though – I had a class a while ago that talked about how patients aren’t mentally competent right after receiving their diagnosis. I recognised myself in that. And I also remember that at that moment, I felt so strongly that I wanted to study, I want to enjoy life and just live, I don’t want to be sick. Things like this are never a welcome surprise, but especially when you’re so young. And the crazy thing was: I felt so healthy otherwise. I wasn’t losing weight, I wasn’t extremely tired or pale. So I knew, that if I were to get sick, it’d be because of the chemo.”

On top of all this: because of her background as a medical student, she knew a little more about the side effects than she would’ve wanted. She knew the chemo would ruin her immune system. Her white blood cells. Everything in her body would be in the gutter – her words. She also knew, because of her residencies, that you could get neutropenic fever. And that that fever could totally kill you.

“So that didn’t help when I entered the medical madhouse.” But it was a medical madhouse Eva knew her way around in. “We’d walk through the hospital to the clinic, and my mother would read all the signs to find out which way we were supposed to go, while I’d walk around confidently and say ‘come, mom, just follow me’, because I knew the place from my residency, and felt comfortable there.”

Because the chemotherapy could adversely affect her fertility, Eva and her boyfriend had to consider whether they’d want to have some embryos or eggs frozen. “Those are things you wouldn’t have thought about otherwise, but my illness forced me to do so.” Her eggs were harvested and frozen, she had breast-conserving surgery, radiation, and then the chemo started.

I want to study, enjoy life, and just live

How did you get through that first period?
“I continued to play volleyball, which I’ve always done at Protos. And right before chemo started, I started cycling with my father so I’d be as fit as possible starting the treatments. I also never really quit studying, because I wanted to live a life that was as normal as possible. Residencies weren’t an option, but I could easily do my science internship part-time. Sometimes, after all those visits to the hospital, it was a relief to just be a student for a little while, to participate again. Even if they were half days.”

What is it like to suddenly have to dial back your ambitions?
Laughing, she says: “Yeah. Takes some getting used to. Sometimes my head just really didn’t work, which is tricky when you’ve got to do quantitative research. But one thing that helped was at a certain point, I learned to lower the bar for myself, to work with smaller goals that were achievable. Another thing that was beautiful to experience, was seeing so many people be there for me. My sister with whom I’d been living, my parents, my boyfriend, but also friends, girlfriends, colleagues. One would cook, another would send a sweet message… so invaluable.”

What was it like to be the only ‘sick’ person amongst all those healthy students?
“Most people – thankfully – never experience anything like this, and that meant that sometimes they thought it was difficult to ask me about it. That’s why I was, and still am, very open about it. Everyone can ask me anything.”

I learned to lower the bar

Did you ever think: I’m going to die?
“Once. The number of white blood cells in my body was extremely low due to the chemotherapy, and I got a fever, 39-point-something degrees Celsius. I knew then that I had to watch out. At the same time, I was just reading through some stuff for my internship, because yeah, what else was there to do?”

Call the doctor, for example?
“I did, eventually. My sister took me to the ER. I was waiting around for the results of my blood work, and you can see those results in the patient portal already, so I logged in, and was able to see how I was doing. On top of that, I’d already planned the whole treatment procedure, and called my parents: “I haven’t heard officially from a doctor yet, but I already know I’ll have to stay here.” That night was tough. I was incredibly scared of ending up with sepsis , blood poisoning; that can be lethal. I remember that I didn’t dare tell anyone, I wanted to solve it myself, and not make anyone else worried. I didn’t even dare to ask the nurse. That felt kind of lonely, when I think back on it now. That’s why I also learned: being sick is not something you have to do alone.”

Did you ask for help for that?
“I went to the Helen Dowling Institute, which is specialised in psychological help during or after cancer. The therapist told me I’d gotten there early, that usually, people don’t call for help until much later. Another thing that helped a lot was getting in touch with other people who have cancer. Comparing medicine schedules with each other, but also making harsh cancer jokes you really only dare to make when you’ve got cancer yourself. And you talk to each other at a different level. More in depth.” 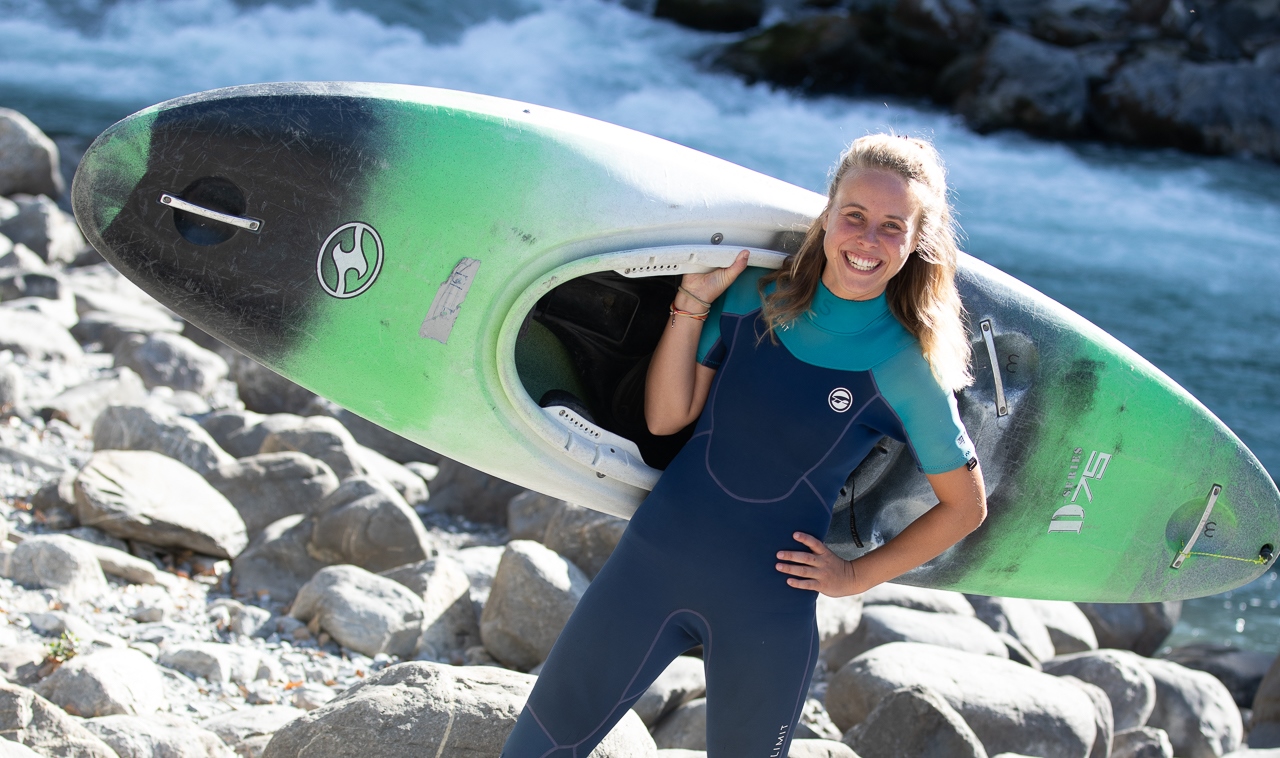 Where do you find other cancer patients?
“Through a convention in the Galgenwaard, I found the Powder Days Foundation. They organise outdoor holidays for young people with cancer, to help them get more faith in their bodies. So I went on a kayaking trip to the south of France and it was truly fantastic. Before we left, I thought: well, won’t that just be the saddest bunch ever, all of us just talking about cancer. But aside from deep conversations, we had so much fun. This past summer, I joined for the second time, but as a medical volunteer this time, and now I’m on the board. I want other people with cancer to have experiences like that too.”

Being sick is not something you have to do alone

How do you feel now?
“I’ve got check-ups once a year now, but I’m clean. I do still get hormone therapy, for which I’ll get a shot every three months for the next few years, and I take daily medication for that. But I don’t experience any intense side effects, thankfully.”

Now that you’ve been a patient, have you changed the way you view your profession?
“I realise you have to be assertive, as a patient, but also that there are so many care professionals who are willing to work so hard for you. I want to be that kind of person too. But I don’t just want to work hard, or only study. I want to live more in the ‘now’, not just have a full schedule; I want to have time for myself too. I don’t want to have the feeling that I’m being lived, I want to feel like I’m living.”

Who are the Promising Fifteen of 2019?

Mid-December, DUB will present the third edition of the ‘Promising Fifteen’. Which fifteen UU students were remarkable in 2019 because of their athletic achievements, studies, volunteer work or other reasons? Until that time, we’ll give a sneak peek every week by publishing an extensive interview with one of the students we chose. This article about Eva is the first of those. Read the interviews or check out the fifteen students who were promising in 2017 (in Dutch, ed.) and 2018.