Surprisingly high turnout and pleasant atmosphere in The Hague.

An estimated two thousand teachers, researchers and students came together in The Hague to protest the ‘deterioration’ of higher education and research. “The next step is a strike!”

From all over the country, protesters come pouring out of buses and trains to go to the Koekamp, right across from The Hague’s central station. Excitement is in the air; everyone is pleased with the turnout.

The protesters wear red squares pinned onto their coats, and often red scarves and woolen hats as well. They carry protest signs exclaiming things like ‘I’m not a robot professor’ and ‘Lower interest rates, more teachers’, although both are vastly better – and rhyme! – in the original Dutch (‘Ik ben geen plofprof’ and ‘Minder rente, meer docenten’).

That morning, six buses departed from Utrecht to join the The Hague protest, filled with around 300 students and employees. Pick-up points were the Moreelse Park, near the station, and the Heidelberglaan at De Uithof. Humanities lecturer Willemien Sanders organised the transport, and is excited: “We’re really quite satisfied with the interest.”

DUB kept a live blog (in Dutch) during the protest on Friday. Read HERE. 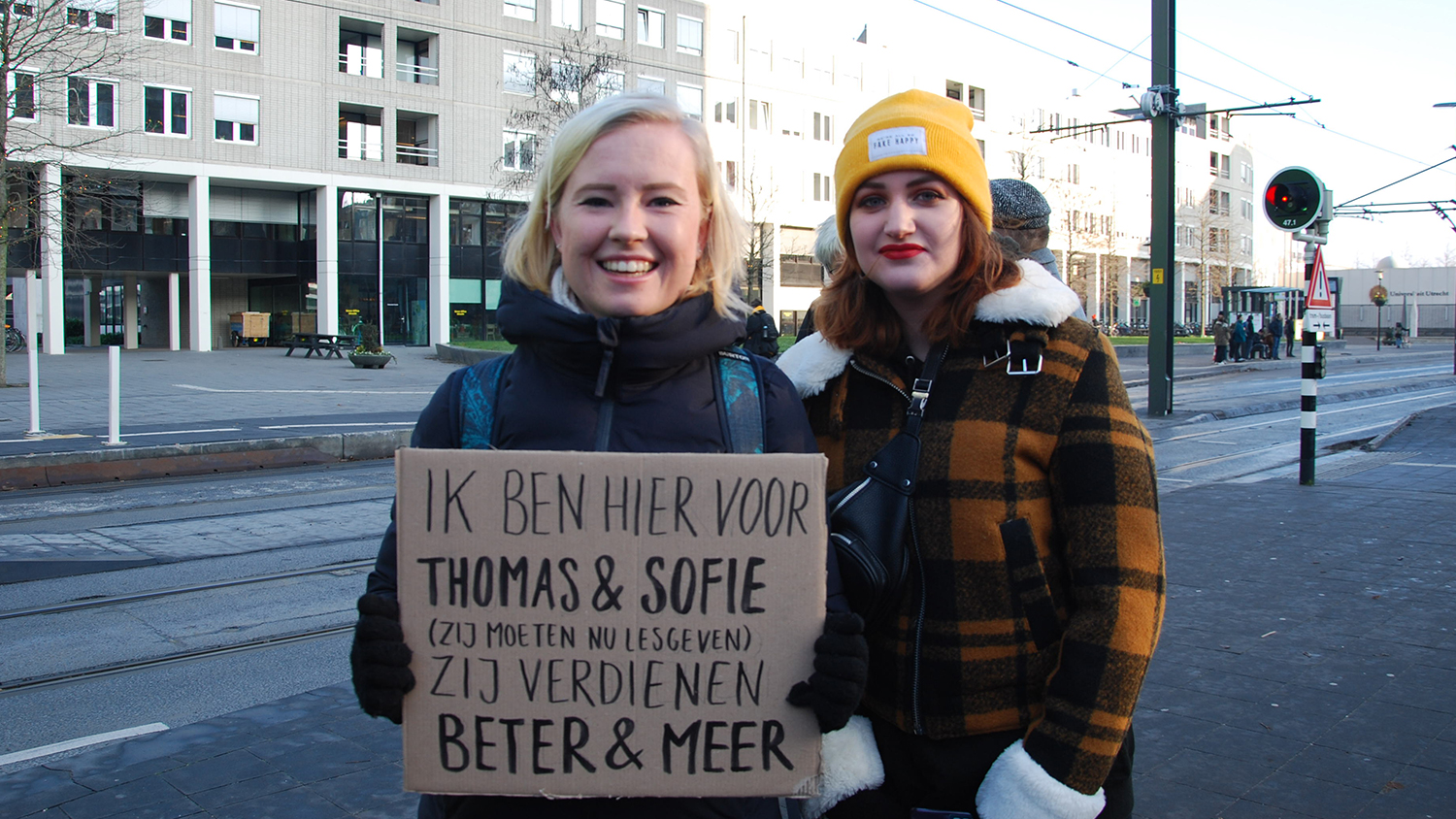 The first students we encountered were Maartje (left) and Casey (right). They joined the bus to The Hague at De Uithof. Maartje: “Thomas and Sofie are my teachers for Social Geography & Urban Development, and I think they deserve more, deserve better. I’ve been a student for a while now, and I see how education is watered down more and more. That’s why I’m protesting.”

A hundred metres away
Initiator of the protest is Rens Bod, professor at the University of Amsterdam. He started the protest movement WOinActie. “We’re a national movement, now,” he says in his opening speech. “They can’t ignore us anymore!”

Did Minister of Education Van Engelshoven hear the protesters’ singing and yelling? Bod wanted to hand her a large, red square as a symbolic action, but she is conspicuous in her absence. “Cutbacks and more cutbacks, and what does our minister do? She won’t even come outside to accept the red square, even though she’s only a hundred metres away from here!”

“Boo!” the crowd yells. Next, co-initiator Geertje Hulzebos, who recently quit her position as chairwoman of the National Student Union, comes forward. She speaks of how she climbed the educational ladder, starting at the vmbo, until she reached university. She says that’s all to the credit of the teachers who believed in her and took time for her, and she’s afraid there’s less and less time for that due to all these cutbacks. The crowd eagerly eats it up.

Marijtje Jongsma of science union VAWO also speeches. Before, the government didn’t listen to the criticism, she stresses. Now the economy’s on the rise again, and yet higher education is still in the red. The protesters are just as discontent as she is. 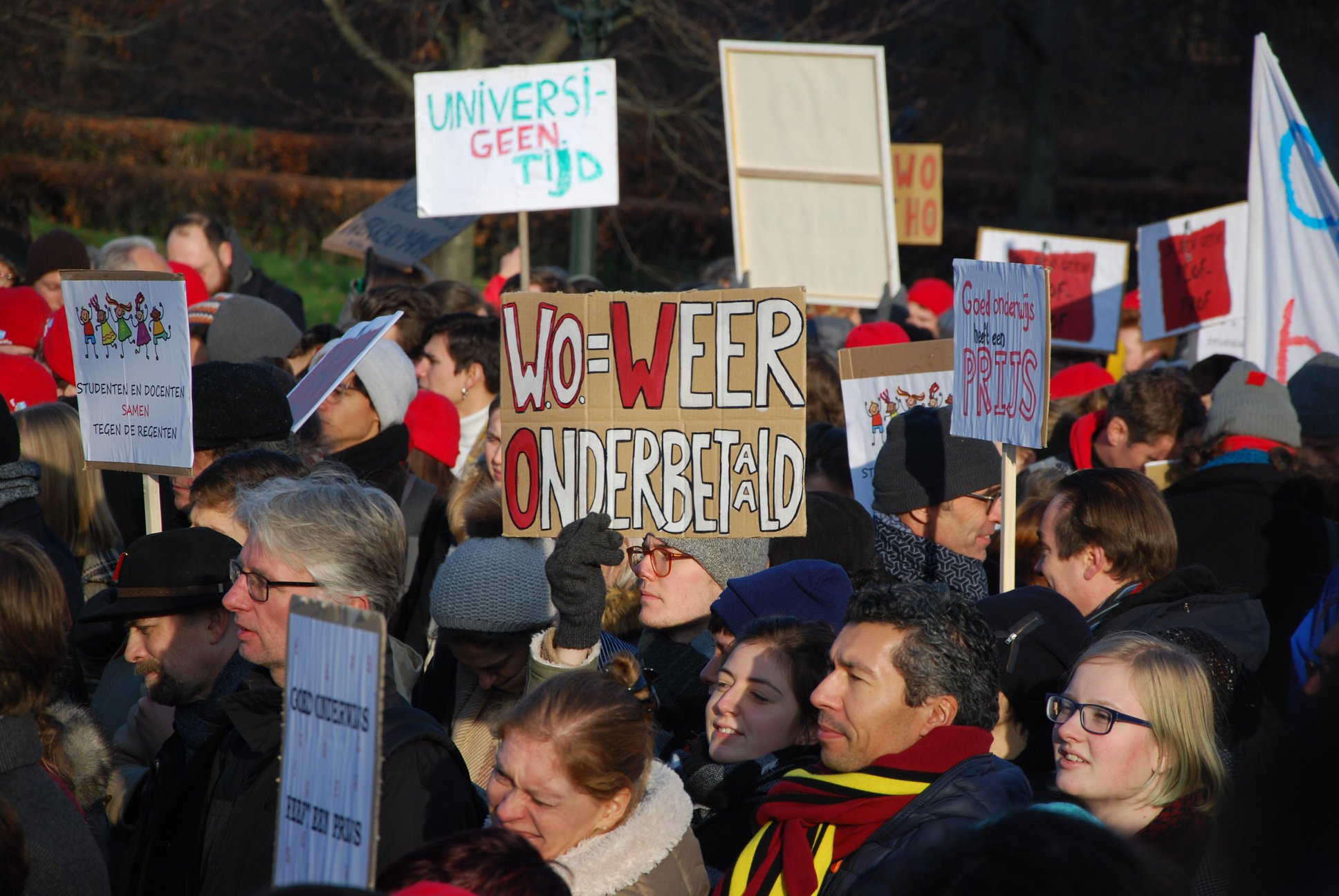 No privilege
Next, the crowd starts a march through the city. They walk past the Hofvijver and the Ministry of Education. They shout well-known slogans, like “Education is a right, not a privilege”, and “What time is it? Solidarity!” – which admittedly makes more sense in Dutch (Hoe laat is het? Solidari-tijd!). There are many international students and employees present, too. The slogan ‘no ifs, no buts, no education cuts’ is a crowd pleaser.

The stakes are high: they want the cutbacks on higher education to be cancelled, and in fact, call for the government to spend a billion euros more. The willingness to protest is high. “The next step is a strike,” says professor Josef Früchtl from Amsterdam.

“I feel like we’re almost at a turning point,” says Maastricht professor Renée van de Vall, hopeful. “There’s not enough money, but that’s not the only thing. Bureaucracy and accountability have gone way too far. We need to focus on good education and good science again, with less competition amongst ourselves. My young colleagues especially are working themselves into a frenzy.”

In the crowd, there’s also a large banner with photos of Utrecht psychologists who stayed home because they were too busy. An oft-heard excuse. ‘Solidarity, but not enough time’, their images say. 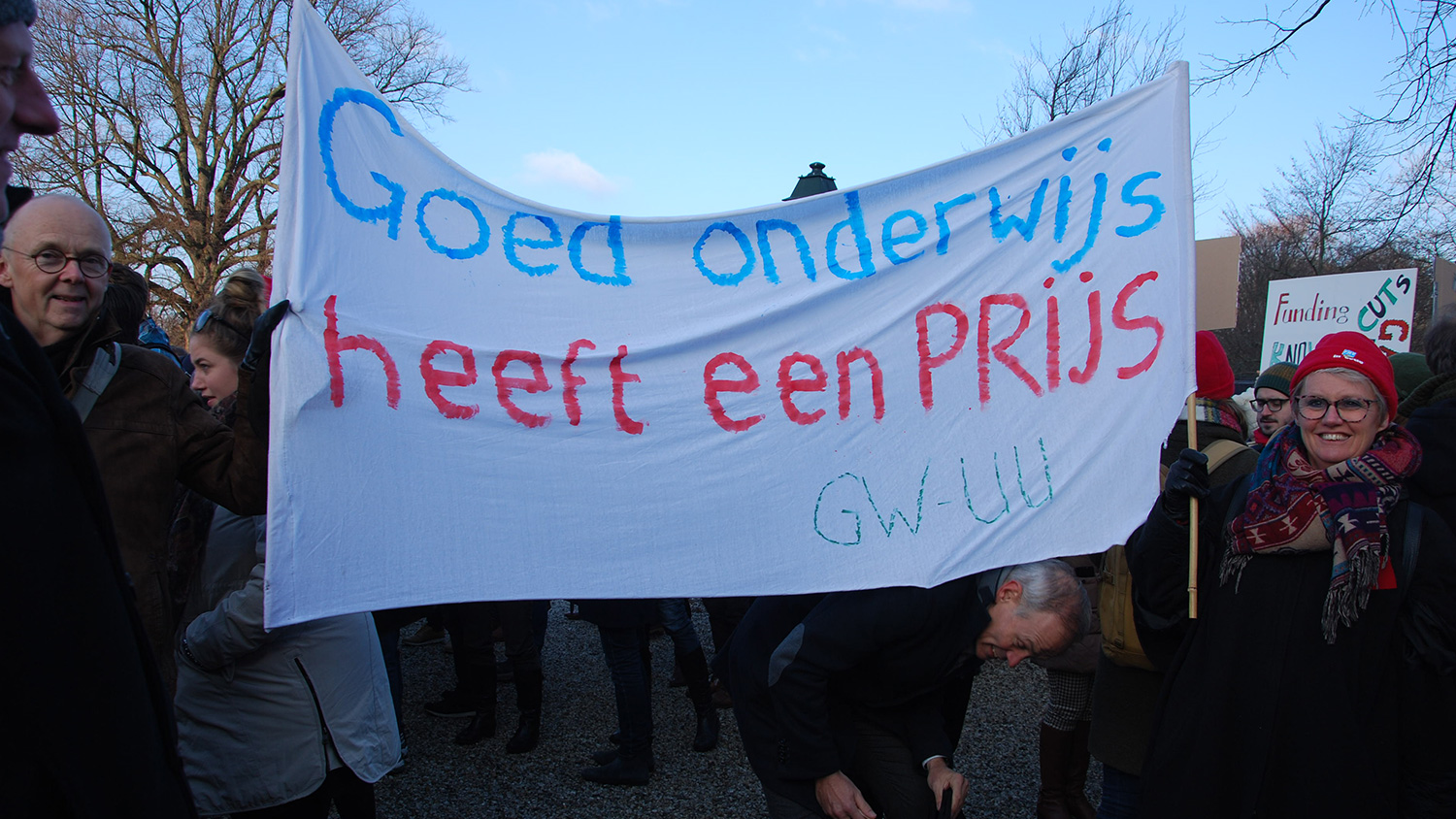 Hanny den Ouden, Humanities teacher and faculty council member in Utrecht, has made a banner for the first time in her life. She’s holding it with faculty council chairman and emeritus professor Leo Lentz. Hanny: “We’ve been talking about this issue for so long, and we’ve been writing thick reports, but nothing’s changing. That’s why I’m here. Something has to change.”

Dancing
After returning to the Koekamp, musician Benjamin Fro climbs on stage. He sings English protest songs, including ones about diversity and colour in higher education. His hip hop sounds nice, the crowd even starts to dance.

Floris Boudens, UU university council member, is one of the initiators of the protest, and is beaming in his green vest. “I’m really pleasantly surprised with the turnout. With over two thousand people here, we’ve really shown today that science is worried.”

Bod thanks everyone in attendance and is grateful for the solidarity. This day is an historic one, he’d said earlier. The first protesters return homeward, the buses are waiting.

Will a strike really be next if the minister ignores the movement’s demands? After the protest, Rens Bod is hesitant to speak out about this. “It’s possible, I’m not sure yet,” he says. “We’ve got another meeting in January (in Utrecht, ed.). We’ll discuss it then.”