For most students and employees, the university buildings are still closed. There are a few PhD candidates and Postdocs, however, who are allowed to return to work in De Uithof. In the past three weeks, the faculties of Veterinary Medicine, Science, and Geosciences have cautiously opened their doors for the first visitors. “I have to reserve a spot in the lab, and we can’t sit next to each other anymore.”

Enrico Verpalen (28) sits down on the stool near ‘his’ fume hood. On Thursdays and Fridays, this is where the PhD candidate works. On Monday, he uses a different one. After two months of working from home, he’s resuming his research on molecules. “With the right combination of different molecules, vaccines can become more effective, and I’m trying to figure out what that mix is. These vaccines might be flu shots, but also for the coronavirus, for example. That’s why I’m allowed to – and why I want to – get back to my research as quickly as possible.”

He’s happy he can work at the university again. “Sometimes I felt guilty because I couldn’t be as useful working from home, but everyone in the Molecular Pharmacy team had the same experience; after all, we’re all in the same boat. At home, I’d often go for a run around lunch time, just to do something worthwhile.” 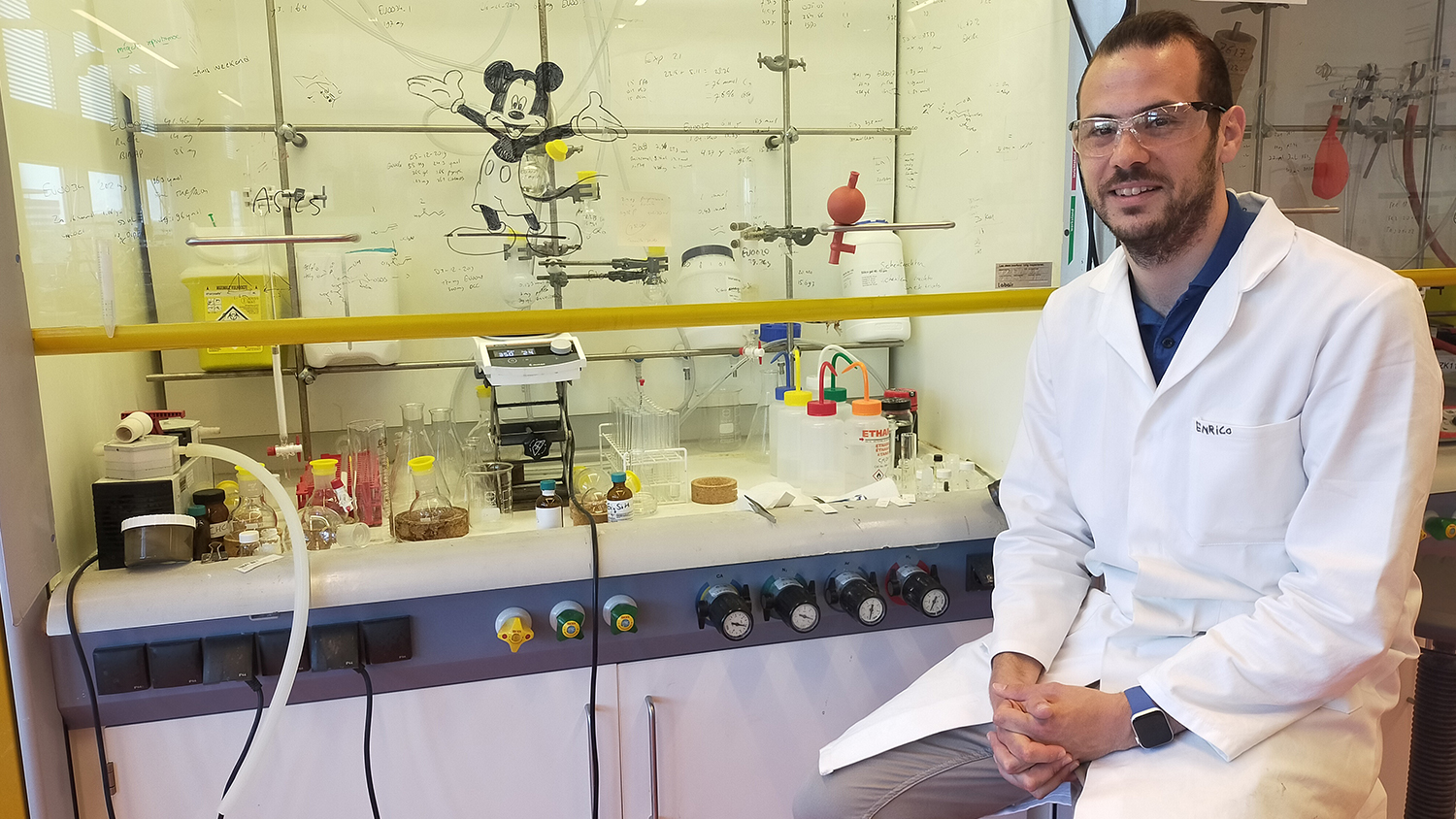 When Verpalen is working at the university, there’s no stepping outside for fresh air during his breaks. He works in the David De Wied building three days a week, and on those days, he’ll be there all day until the building closes. “The principal researchers created a schedule for those who are back to work at the university, and I want to spend my days in the most useful way. There are now twenty of us working in this building instead of sixty, and only one person is allowed to be in one row of fume hoods. We’re washing our hands a lot more often, and everyone has more stuff of their own. The equipment we do still share has to be cleaned after each use.”

The first step
Now, after the closure of university buildings in mid-March, the first step to reopening the university has been taken. On Monday, May 18, the doors opened for the first PhD candidates and Postdocs who don’t need test subjects for their research. All buildings that have reopened are only allowed 30 percent capacity. The faculties themselves decided which researchers would be the first to get back to work.

The labs of Science and Veterinary Medicine are in use once more; at Geosciences, lab leaders took a little longer to restart their labs, says spokesperson Stephan van Meulebrouck. The first researchers there will resume their work at the university today.

Reserving lab spots
PhD Candidate Bo Yu (29) of Veterinary Medicine was happy to be able to resume his work in the labs of the Jeanette Donker-Voet building in mid-May. It’s impossible for him to continue his research, with cow embryos, at home. “For this study, we need microscopes, refrigerators, and other machines, and I don’t have those at home. And this is my last year as PhD candidate.”

He studies cow embryos to improve the understanding of how a fertilized egg grows to become a calf, which will help to understand how exactly this process happens in humans. He’s been at De Uithof again for a week now. “Only three people are allowed back in the lab at a time. All eight researchers who are allowed to work at the university again have to reserve a spot in the lab. Now, I’m at the university every day. When the lab is occupied, I work in my office. I share the office with two others, but they still have to work from home.” 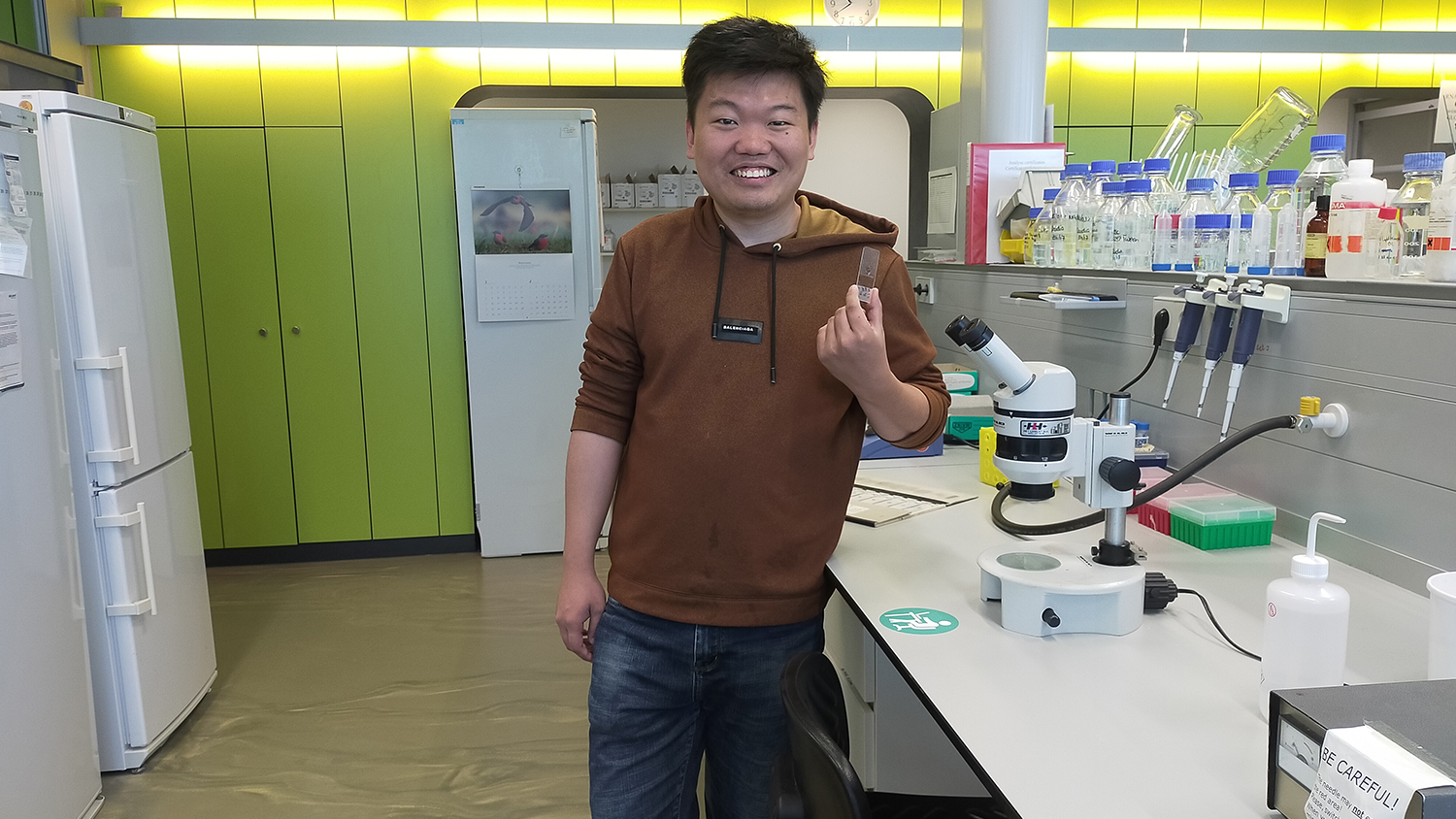 Emptiness
The many empty workspaces in the Jeanette Donker-Voet building in late May show just how few UUers are working at the university right now. Since the start of the corona crisis, everyone who’s in one of the buildings has to register at the main entrance. Every now and then, Yu sees one of his colleagues in the hallways, and in the lab, he’s the only person present for almost the entire morning. Near noon, one of Yu’s colleagues joins him there. she walks to one of the tables, one row away.

Aside from allowing fewer people to be in the labs at the same time, other corona measures have also been taken. Yu grabs a paper towel and a bottle of alcohol. He sprays some alcohol on his table and wipes it with the paper towel. “Before we touch anything, we have to wash our hands with soap, and we have to clean our tables before and after each use. We’re not allowed to sit in the same row of tables, so we can work at 1.5m distance from each other.”

More productive because of corona measures
Enrico Verpalen from Pharmaceutical Sciences didn’t have any issue resuming his work after two months of working from home. “I thought about it a lot: what will I do at the university once I’m allowed back? That helped me get started faster; better than I usually get started after a weekend.”

Bo Yu did experience a technological start-up issue. “The camera I use to take photos of the cow embryos was no longer connected to my computer when I returned after the lockdown, so I couldn’t see the photos. Thankfully, that was solved quickly.”

Verpalen feels he’s more productive than before the corona crisis. “I work better when there’s fewer researchers in the room with me,” he says. “You don’t talk to others as often. Plus, there are machines we only have two of, and now I don’t have to wait for someone else to be done before I can use the machines.”

He’s not the only one. Yu, too, doesn’t talk to his fellow researchers as much, because they’re not allowed to work side by side anymore. “But sometimes I do miss it, just asking them something, or sharing with someone when something’s frustrating me.”

Getting along with your colleagues can be a disadvantage, too, Verpalen says. “Some researchers aren’t as strict in following the corona measures. I myself also feel it’s challenging to stick to them. I’m quite close to some colleagues, and it’s easy to get closer to each other than 1.5 metres.”