2,000 students raise their voices for the possibility to study without debt

About 2,000 students staged a protest in The Hague last Thursday to call for an end to the student loan system in place in the Netherlands since 2015, as well as for compensation for the students harmed by the abolition of the previous basic student grant. They managed to respect all Covid rules while protesting.

"Debt so high it's absurd? Students, let your voice be heard!" The battle cry chanted by hundreds and hundreds of striking students could be heard, loud and clear, even from Malieveld's parking lot. But there were other slogans too, such as "What do we want? To be debt-free! When do we want it? Now!" or "Generation debt wants its money back!"

Under the motto #nietmijnschuld, which in Dutch means both "not my fault" and "not my debt", national student union LSVb and trade union FNV Young & United have been protesting against the student loan system for years. They were joined by about 2,000 supporters at Malieveld, in The Hague, for a so-called 'national student strike'. Earlier this week, UU student Marte Vroom, one of the organisers of the protest, explained the movement in an article on DUB.

It looked like a festival, crush barriers and everything
The atmosphere resembled that of a music festival. The sun was shining, people were smearing themselves with sunscreen, and there was a big stage protected by crush barriers. Wearing bright-coloured vests, the students shared their lunch with one another, making sure to stay at least 1.5 metres apart. 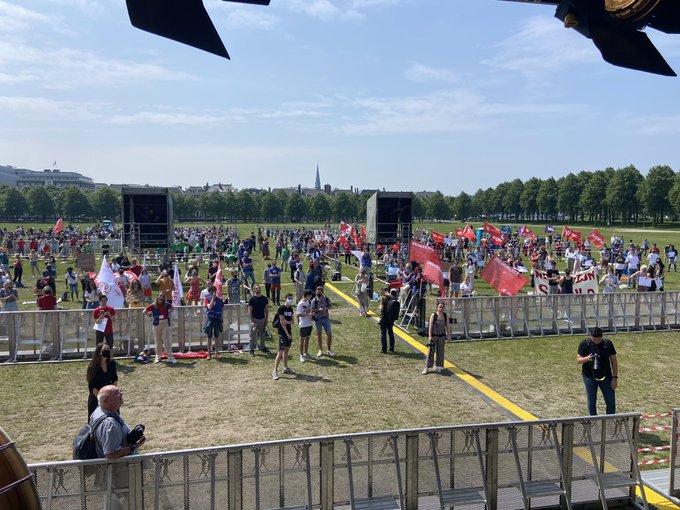 But, as laid-back as the setting seemed, their message was serious: the strikers were demanding the possibility to acquire higher education without contracting a debt, as well as full compensation of the 'unlucky generation' of students suffering from the consequences of the abolition of the basic student grant, a monthly benefit that students didn't have to pay back if they managed to graduate within ten years. "Today we're leaving nothing to chance!", shouted LSVb chair Lyle Muns onstage. "Not my debt/fault!", the students chanted back.

Approximately 1,200 students were gathered at the Malieveld at the beginning of the protest, but not everyone was there from the start because of an issue with the trains. Later on, the police counted around 2,000 protesters. They waved flags and carried signs with slogans like "I'd like to get a mortgage someday".

Loud booing
A few members of parliament reserved a timeslot in their agendas to pay a visit to the demonstration and briefly address the crowd. The new spokesperson on matters of education for the Labour Party (PvdA in the Dutch acronym), Habtamu de Hoop, who's 23 years old and a student himself, received a lot of applause. "I don't just listen to you, I am one of you", he said. Lilian Marijnissen (Socialist Party) was also well received, especially when she said that her party would like to fully compensate the 'unlucky generation'.

The same cannot be said about the new education spokesperson for VVD, the only party still in favour of the loan system. Hatte van der Woude was met with loud booing from the crowd. Things didn't get any better when she was asked if the average debt contracted by students doesn't shock her, and she said "I'm shocked that students even borrow so much". She couldn't finish her answer, though, as the booing from the audience was way too loud. Marijnissen from the Socialist Party went in for the kill: "See, guys? You shouldn't have borrowed so much, that's your fault!"

Ode to a lost love
The crowd didn't make a sound during Amara van der Elst's spoken-word poetry reading. She is 19 years old and also performed at the National Remembrance Day at Dam Square in Amsterdam. The sound soon resumed when a song about the basic student grant, titled 'Ode to the Lost Love', was sang onstage. Protesters danced all around. It was a hot day, which meant some people took their face masks off, but people still kept a safe distance from each other.

LSVb chair Lyle Muns couldn't be happier about the protest, considering "the train service was partially interrupted and we're in the middle of a pandemic". For him, the fact that "thousands of people have showed up demonstrates the importance of a proper funding system and the quality of education".

He cannot stay much longer, however, as an OV-fiets (public transport rental bike, ed.) awaits. The organisers closed the event on a hopeful note, drawing up their own cabinet formation letter. Muns cycled away with a friend to the sound of two Japanese drums, the letter in his pocket. Their destination? The office of informateur Mariëtte Hamer, the person in charge of investigating the possibilities of forming a cabinet following the elections.