As a memorial, BoKS (SSH tenants’ association) made a time capsule with a piece of debris from the old KPN tower and some SSH relics. Photo: DUB

Construction of student housing tower Sequoia has officially started this past Thursday afternoon. The student housing complex, which will include 318 rooms to be let by the SSH, will be placed on top of the foundations of the old KPN tower, and will be finished by 2020. After 2023, an additional five hundred starter homes will also be built on the premises between the IBB student housing complex and the Diakonessenhuis hospital.

“Contrary to the Utrecht norm these days, we’re happy to say these 318 new student rooms will in fact be affordable,” grinned SSH director Ton Jochems during his opening speech last Thursday. It’s not yet clear how much the rooms, which will be 21 square meters and will have their own kitchens, toilets, and showers, will actually cost.

“We value personal connection very much,” Jochems continues. “That’s why the future tenants will be able to meet up with each other at the study spaces, the laundry room, or on the terrace near the coffee corner.” Aside from the kitchens, the building will also have one shared living room with kitchen facilities for every ten students. One condition is that two out of ten housemates are international students. That means the tower will house around 64 international students, Jochems explains. “We’re giving them a better chance at finding a place to live, because it’s harder for international students to find rooms.” By doing so, the SSH is satisfying the wishes of the university and the city of Utrecht regarding the improvement of housing for foreign students. 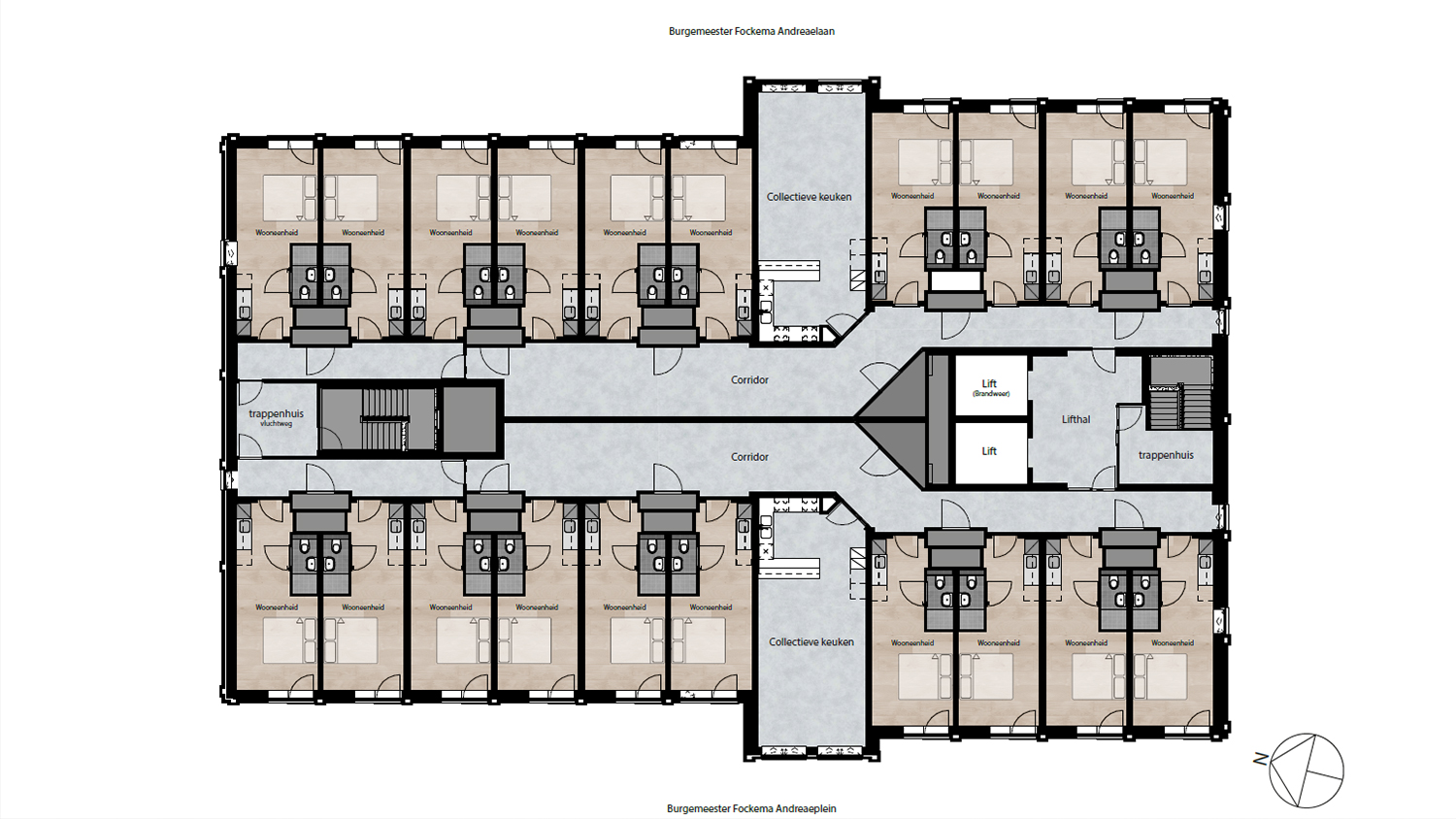 One communical living area/kitchen will be provided for every ten inhabitants. Image: SSH

After the speech, the audience moves to the building’s foundation. It’s largely the actual foundation of the old KPN tower, which has since been demolished. As a memorial, a time capsule was made and cemented into the foundation: a piece of debris from the old building, along with a book on students in Utrecht, an SD card with photos and quotes, and several other SSH relics. The housing development project De Kwekerij (‘the grow house’), named after the horticultural facilities that had once been situated here, will house a part of KPN in the future: the company will have two separate rooms for equipment storage in the basement and on the ground floor of the Sequoia building.

A theme that’s central to the development of De Kwekerij is sustainability, says SSH property manager Marianne Kleijnen. “The Sequoia will have solar panels on its roof, we’ll ensure high-quality insulation, and we’re planning to use cold and heat storage for water that’s stored underground, which we’ll use to heat and cool the building.” There will not be many parking spots, Kleijnen says. “To me, that’s also a kind of sustainability. Conversely, each tenant will have their own personal bike parking spot in the basement, and additional parking facilities for bicycles will be added outdoors.”

Aside from the Sequoia tower, which was named after the tall American tree for its height, the premises will also see the construction of 470 starter homes in the future. Monique van Loon, spokesperson for development agency Jebber, says these homes, too, will only have a limited number of parking spaces. “We’re joining the trend that sees people becoming more and more independent from their cars. That’s why we’re going for bike sheds, shared cars, and even shared mopeds.” The Jebber starter homes will be built in two separate phases, and will be finished in 2021 and 2023, respectively.