March for Science: for science, against Trump

Amsterdam’s Museum Square hosted the Dutch edition of the March for Science last week. Although the march was technically apolitical, there was a lot of vocal criticism of right-wing politics and Donald Trump.

March for Science: for science, against Trump

Science is ‘just an opinion’? Scientists and supporters rebelled against this statement in almost 500 cities worldwide. Amsterdam’s Museum Square was one of the locations, where several hundred protesters gathered last Saturday.

Climate change was the talk of the day during the March. Many protesters are worried the Trump administration will wipe out years of scientific data about climate change. The most popular protest sign spotted at the March held a clear message to the American president: ‘You can’t grab science by the pussy’. 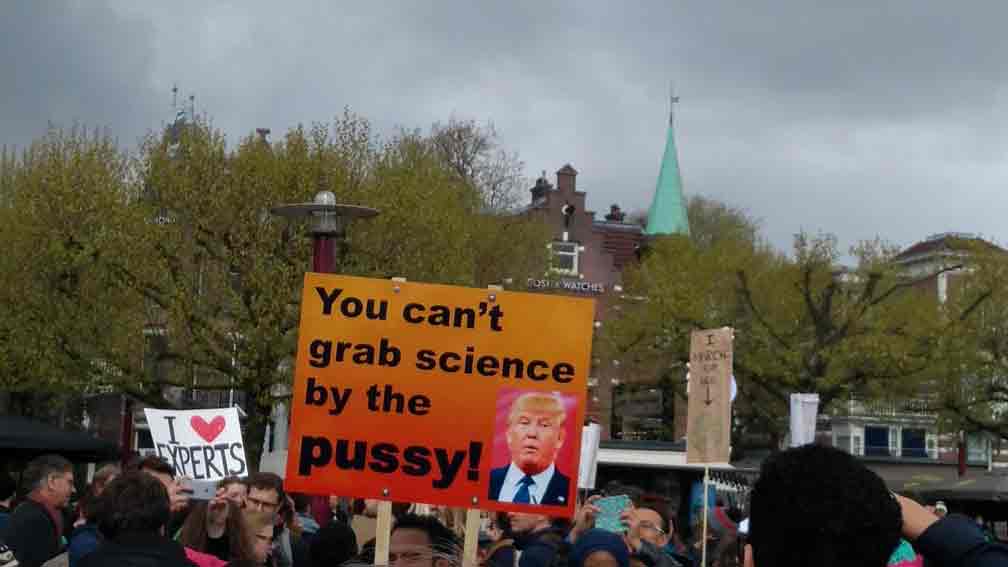 Trump was definitely a hot topic for criticism at the Museum Square. A group of women from Georgia, USA – wearing pink pussy hats – says science should never be political, but they’re making an exception when it comes to Trump. “We have to use these kinds of marches to show Trump how big the opposition is.” Could a Trump supporter join a march like this one? “No,” the women say. “You can be a Republican, sure, but supporting both Trump and science is impossible.”

Less biting was the discussion at the Museum Square’s main stage, where prominent scientists emphasized the importance of objective facts, empirical evidence and repeat experiments. Nationalism, populism and gut feelings received harsh criticism, but researchers like Appy Sluijs, Pearl Dykstra and Peter Hagoort mostly stressed the importance of unity and investing in science. “Have faith in science, simply by boldly going where no one has ever gone before,” Hagoort stated. 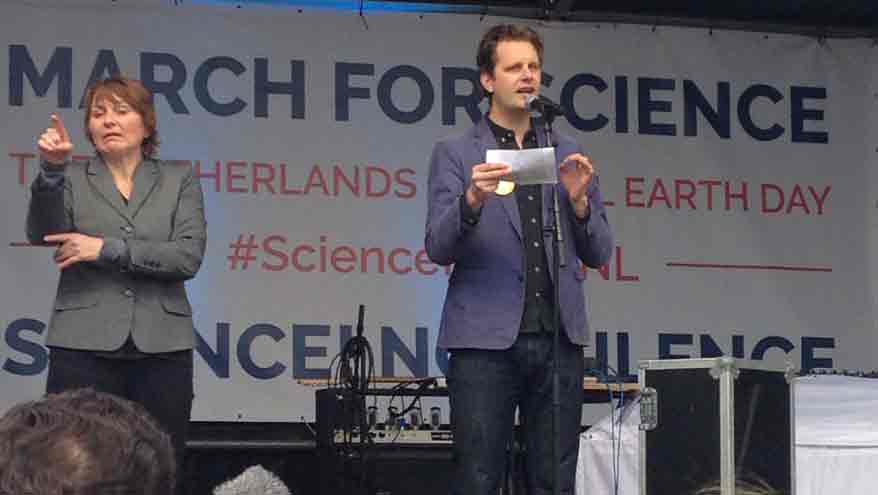 For those hoping for more activist rhetoric, the chairman of the national student union (LSVb) Jarmo Berkhout held a speech criticizing right-wing politics, which was said to be misusing science for ‘perverse purposes’.

He had nothing good to say about the Dutch parliament’s plan to research political affinities at universities. “Why would that matter?” Science is not a ‘left-wing hobby’, but the aorta of a healthy society.

“Science should not be in service of politics,” Berkhout said, praising the March for Science as a way to “take a stand against fascist tendencies.”

The atmosphere was more friendly in the Exploration Tents, which were there to show people the wonderful world of science. Mini Professors introduced children to chemistry experiments; nearby, a cross section of a cat was displayed. 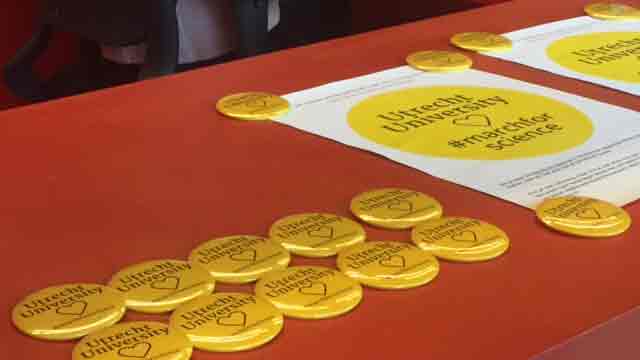 Utrecht University was also present at the march. The university had had special badges manufactured beforehand, to be picked up at the university libraries. The stock of 300 ran out quickly and many people proudly displayed their bright yellow badges on Saturday. 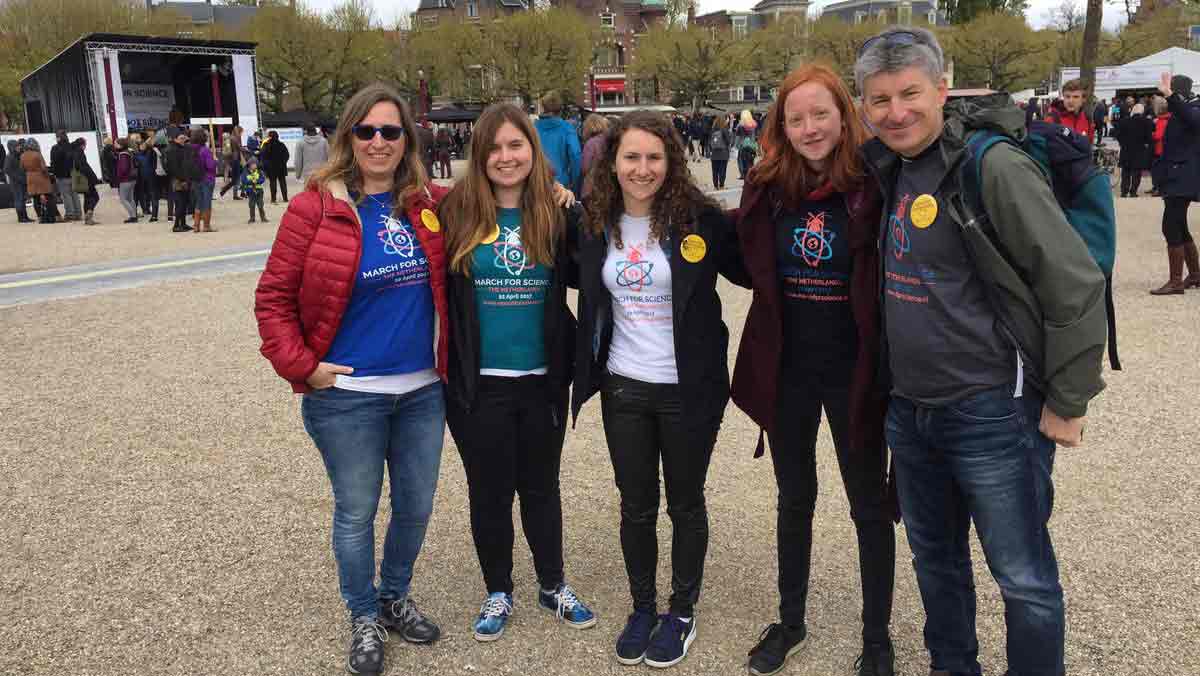 The university museum was responsible for the UU stand. The UU was not the only institution with a stand of its own. An ice cream tent stood between stands about anorexa research and obesity in children. The Royal Dutch Academy of Science (KNAW) handed out free ice cream in the tent, where the temperature had risen considerably due to the many visitors. “Our methods of seduction work perfectly, because they need to visit our stand first if they want ice cream,” KNAW president José van Dijck explained with a laugh. 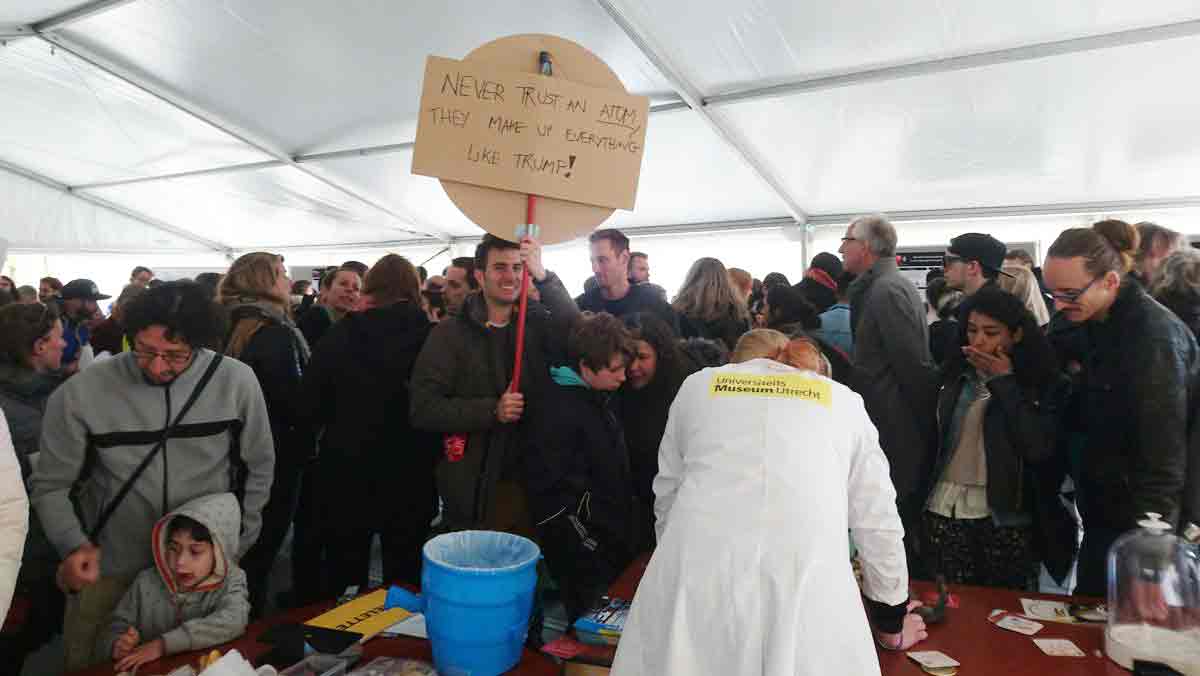 Rector Magnificus Vinad Subramaniam of Amsterdam’s Vrije Universiteit (VU) acted as spokesperson for several of his colleagues. “A society that restricts science, is restricting itself. Let’s not just share our concerns, but also celebrate the beauty of science.” And, he asked his audience, what better way to do so than by investing in science?

Minister of education Jet Bussemaker was present, too, and was called to the stage for a closing statement. “Scientists aren’t usually the first to protest,” she said, “so it’s great to see so many people here. I’d like to stress how important it is to invest in fundamental research in climate and health, but also in fields like social cohesion.” 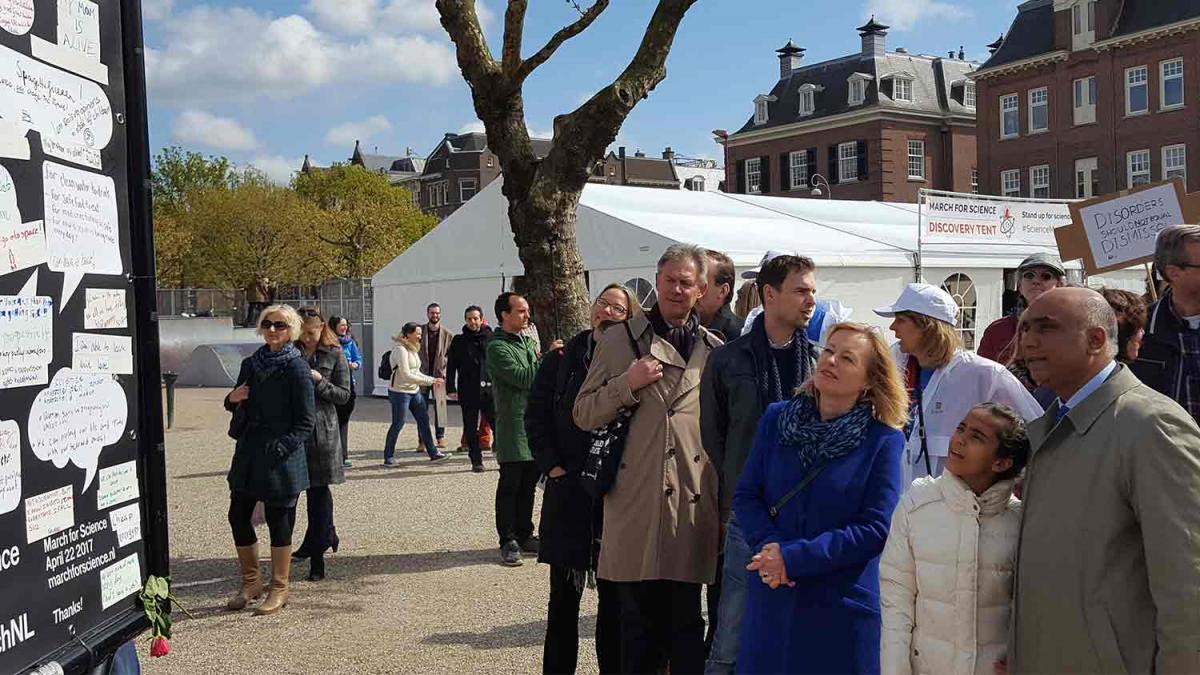 She didn’t want to endorse the statement that the Dutch government should invest an extra one billion euros in science, but that did not dampen the mood. VU rector Subramaniam invited her and the rest of the march to a ‘science stroll’ around the Museum Square pond. At last, the people marched. A little.