What a year to be the chair of a national organisation representing the interests of students. Lockdowns, self-tests, proctoring... This past year has been completely atypical, not to mention there were also general elections in the Netherlands. As they step down, the outgoing chairs of ISO and LSVb take a look back at a year that has been far more eventful than they could have ever imagined.

ISO and LSVb presidents step down after bizarre year

Demonstrating during the pandemic? “Glad we did it.”

Lyle Muns, chair of the Dutch Student Union (LSVb in the Dutch acronym), and Dahran Çoban, chair of the Dutch National Student Association (ISO) are both saying their farewells. The phones they carried to respond to enquiries from the press have already been passed on to their successors.

“It feels like something has been amputated”, says Çoban. Muns doesn't feel the same way. “To me, it feels like I’m in an oasis of calm. I can sleep in now. Nobody’s calling me out of my bed anymore.” That surprises Çoban: “Oh, I haven’t managed to sleep in yet. I still wake up at six-thirty.”

When the two student leaders took office, higher education was already in the grip of the first lockdown. Suddenly, everything had to be taught online. Face-to-face teaching was out of the question and their presidential year was looking a lot different than expected. They couldn't visit student associations at all: almost everything had to be done through a screen.

Compromise
“It was a totally different year from what we had hoped for”, Muns declares, “and also really complicated. We could see how much impact the crisis was exerting on students’ wellbeing. We had to argue for them to have more space. On the other hand, we couldn’t just say ‘let's drop all the restrictions’.”

“Sometimes, we had to compromise”, says Çoban. “What do students want and what’s good for society as a whole? Students really did their very best. Some of the press said that students caused the second wave, while most of the time, I was seeing them putting their whole house under quarantine or drawing up strict rules. Sometimes they weren’t allowed to return to their student homes because they’d left the bubble at Christmas to visit their parents.”

At first, students' situation attracted very little sympathy. Housemates were not even allowed to sit together outside on a lawn, because officially they were not a ‘household’. That resulted in many – unjustified – fines and accusations.

Lack of understanding
“What I missed sometimes was understanding”, adds Muns. “Students are in a vulnerable phase of their lives and they had to make quite big sacrifices. They had just moved to a new town and they should be getting to know new people, but then they had to limit their contacts – and not because they were in much danger themselves. If a few students forgot to stay socially distanced, as everybody did at some point, it was as though they were all out to kill the elderly.”

For Çoban, “Students really were at the back of the queue when it came to relaxations. I received so many phone calls inquiring 'why are they forgetting about us?' Since most students were still managing to earn their credits, it didn’t seem like they were having a big problem to the politicians. They were also very laid back about online teaching. We’re working online too, they said. But students don’t get paid for it and they usually have less space.”

So they started to resist. Muns mentions the demonstration held on October 2020 on Museumplein in Amsterdam, which used the slogan “I want to go to school”, as one of the highlights of his year. That protest made national news, finally putting student wellbeing on the agenda.

Virologists
“We really questioned ourselves whether we should take to the streets because of this”, Muns recalls. “But I’m glad we did.”

“We followed it up, too”, adds Çoban. “We commissioned research, which showed that students were really struggling. So we no longer had to argue that at every meeting.”

Even ISO, which usually prefers to talk rather than to demonstrate, took to the streets. Together with LAKS, the national action committee for school students, the organisation organised a small gathering on Plein, in The Hague, in February. Their protest was outshined by the big news of the day, however: the government’s announcement of a new 8.5 billion-euro economic relief package.

The Ministry of Education did display some empathy for the students, say the two presidents, but that sentiment failed to reach the rest of the government. The Outbreak Management Team was decisive in shaping policy, and it – certainly in the early days – viewed the crisis primarily from a virological perspective.

In the end, though, the student organisations managed to achieve more than they had originally expected. Next year, tuition fees are being halved across the board. Although there is always room for improvement, Çoban and Muns believe that they have fought a good fight on that issue. Students sometimes think that their opinions have no weight, they say, but victories like this show that they can make a difference.

Election
The biggest theme of the year should have been the general elections, held on March 2020. And yes, their organisations did put a lot of effort into that as well, according to the two chairs.

ISO, for instance, compiled an online guide for voters, highlighting the policies of each party on a wide range of subjects. That forced some politicians to adjust their positions with regards to the issues of interest to students. Take the binding study recommendation, for instance.  “That attracted a lot of attention”, says Çoban. “We’ve set something in motion there.” Their hope is that the strict benchmark currently in place – which, according to ISO, is a source of stress for many first-year students – will be eased or perhaps even abandoned altogether.

In the aftermath of the election, LSVb organised a national student strike with a mass rally on Malieveld in The Hague calling for abolition of the student loans system. “That was the coolest thing I’ve experienced all year”, says Muns. “A huge demonstration, all socially distanced, with no unrest, no water cannons... We managed it, and without the strike, the issue would long since have disappeared from the public eye.” 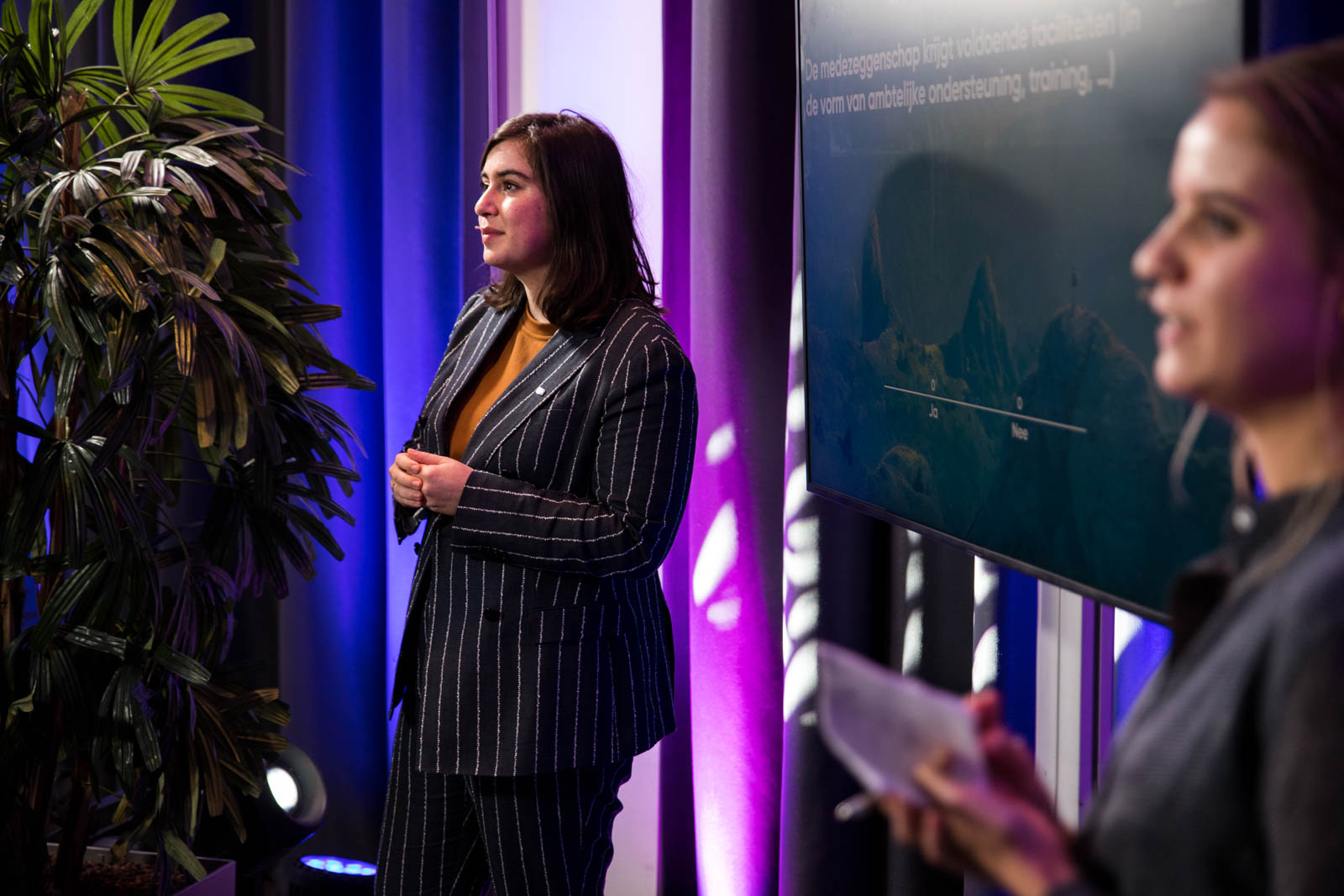 Dahran Çoban, who served as chair of national student union ISO in 2020-2021. Photo: courtesy of HOP

Own proposal
ISO was not represented on Malieveld. In fact, the two organisations have somewhat divergent perspectives on the future of student financing – this week, ISO has published its own proposal, based on research by Nibud, the National Institute for Family Finance Information. But neither group wants to highlight their differences in this interview. In broad terms, they are in agreement: the system has to be improved.

Which is totally possible, they say. “For the first time in decades”, Muns declares, “there’s a chance that student financing is actually going to be improved. Up until now, there have just been cuts and more cuts. We’ve already made sure that tuition fees are going down for once, even if only for a year.”

Now that they have completed their terms of office, what's next? Muns is going backpacking on his own in South America. “I’ve been working so hard all the time that my head is constantly full of adrenaline. There’s been no time for questions like, ‘What’s this crisis doing to me? What is a year in the public eye doing to me?’ It will be good for me to reflect on the past year. But, for that, I need to be alone for a while.”

Heading LSVb has not been that bad, he says. Having previously founded a trade union for sex workers, he says that, “If you really want to be in the spotlight, then stand up for them. By comparison, a student union is peanuts.”

Advance reading
Meanwhile, Çoban is going to start working on a Master’s in Jurisprudence and Philosophy of Law at Leiden University. That means being taught by controversial professors Paul Cliteur and Afshin Ellian. “That says nothing about my own political preferences”, she stresses. “I just find the subject very interesting.” She thinks she might already do some advance reading of the literature this summer.

A year in the public eye has not always been easy for her. Especially since outspoken women attract far more criticism than men. Sometimes it felt threatening, and she was glad that nobody knew where she lived. At other times, she has found the slating simply stupid. “Like when they said that ISO was too white. At times like that, I knew they hadn’t for one second given me any thought whatsoever – and so they’d forget about me straight away as well.”