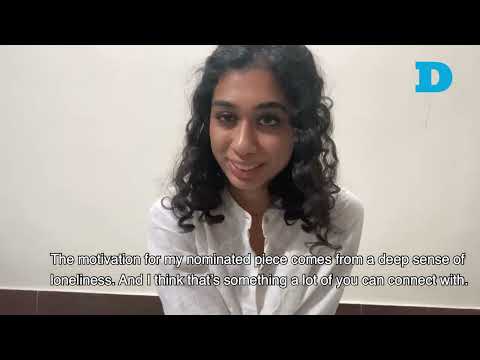 Who are the nominees for DUB Campus Columnist 2022

The winners of DUB's 2022 Campus Columnist competition were announced on Tuesday, January 18, in an online meeting to which all finalists were invited. Each of them had the chance to introduce themselves in a video that was shown during the online gathering. This is the second year in a row that the event could not take place in person, but around fifty people attended it digitally.

DUB's editor-in-chief, Ries Agterberg, stated in his opening speech that, this year, most entries didn't explicitly talk about coronavirus anymore, but rather about how the consequences of the pandemic form a backdrop for their university experience. "A new reality is slowly but surely establishing itself. This is a generation of students who have spent a significant part of their studies dealing with a pandemic, and that's what student life has come to mean for them." One of the contestants, a student, wrote: "This is my second year and I've barely seen my classmates. People talk over and over about a new normal, but how am I, a second-year student, supposed to know what normal is? I've got the feeling that something is amiss, but I have no idea what it is."

There were five finalists this year – three for the Dutch website and two for the English one. They all made a video introducing themselves and you can watch the ones sent by the two English-language finalists at the top of this page. The video with the Dutch-language finalists can be found by clicking on the link "Read in Dutch" below the title of this article.

The international winner is...
This year's international winner is currently in India, but only temporarily. Master's student Chandni Shyam is conducting field research in her home country, which is why her winning entry is titled "My LDR with UU" (LDR stands for 'long distance relationship', Ed). The jury was very impressed by her column, which was well-written and contained a moving, distressing message: Chandni shares what it feels like to be in a country where Covid is a much worse problem than in the Netherlands.

The runner-up was Ida van Zwetselaar, second-year student at University College Utrecht. Her column, Oliebollenkraampjes, stood out because she told an anecdote with meaning and symbolism. Ida recollects and reflects about an incident that took place when she went to buy oliebollen from the stand at Neude.

And the Dutch campus columnist is....
For the Dutch page, the jury has chosen Leonie van Bruggen as the next campus columnist. She is a senior radiologist at the Faculty of Veterinary Medicine who also serves as a tutor for first-year students. Additionally, she is conducting a PhD research in the field of forensic veterinary medicine. Her entry, Je gaat het pas zien als je door hebt ("You'll only see it once you get it"), talks about her work at the veterinary clinic. In a subtle and convincing way, she draws a parallel between animal abuse and the Covid-19 pandemic. The jury was quite impressed by her wordplay.

Although Leonie and Chandni are the winners, the jury really appreciates the other finalists. Robin Harsmolle, student of Language & Culture, told the story of the day she was cycling in the city and saw (what she thought was) a dead man in a car. It's not the story itself that's remarkable, but rather how she uses it to illustrate the experience of being a newcomer in a big city, with all the discomfort that this can bring. "So relatable", said one of the jury members.

Communication officer Reineke Maschhaut, who works at the Faculty of Humanities, was hired during the pandemic. In her column, Post apocalyps (Post-Apocalypse), she describes how she felt coming to the office for the very first time, in the summer of 2021. It's a shocking account of the lights going back on in an office space that had been abandoned in a hurry.

Jury
Leonie van Bruggen and Chandni Shyam are both getting the Erik Hardeman stipend, worth 1,000 euros. They are succeeding the 2020 winners Sophie Hudson and Lili Szarvas.