The municipality is taking measures to prevent accidents at the Leuvenlaan-Universiteitsweg T-junction. A new stretch of cycle path and a new crossing on Leuvenlaan should make the situation safer for cyclists and pedestrians. ChristenUnie and CDA municipal councillors now also want adjustments in other places in De Uithof.

Cyclists and pedestrians are offered an alternative route through a new cycle path on the east side of the Leuvenlaan and a new crossing at the Leuvenplein. They can hereby avoid the dangerous crossing. (see image below) 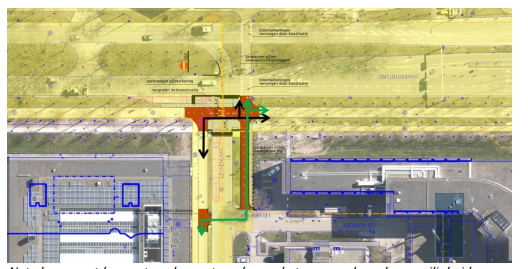 Image from the answers of questions to the council. Black is the current situation, green the alternative route that is being constructed.

Alderman Lot van Hooijdonk announced the measures in her answers to questions (pdf in Dutch ed.) from councillors Jan Wijmenga (ChristenUnie) and Sander van Waveren (CDA). They had written to the alderman after the fatal accident with a motorcyclist near the intersection. According to the municipality, that accident had nothing to do with the layout of the intersection, but the alderman nevertheless offered some improvements.

In the video below that we published earlier, a student tells how he was hit at the crossroads. Councillor Jan Wijmenga also speaks about the unclear traffic situation that confuses motorists and cyclists.

Wijmenga and Van Waveren are happy that the municipality is taking action in response to their criticism. Yet they are not completely satisfied. This spring, the two of them came to De Uithof to take a look for themselves and saw that a considerable number of adjustments are still needed to guarantee road safety. As a consequence, Wijmenga and Van Waveren have asked new council questions (pdf in Dutch).

In other places on the Leuvenlaan, crossing should also be safer, the two say. A university employee informs DUB that they intend to at least make an escape hill at the crossing with Genèvelaan in the middle of Leuvenlaan.

But also the crossing roads between Cambridgelaan to Coïmbrapad and Cambridgelaan to Bisschopssteeg could be safer, according to the council members. Moreover, they regard the Heidelberglaan-Universiteitsweg-Bolognalaan intersection to be very unclear. Witness also the somewhat dated video below that they have included in their advice questions.

Finally, the council members bring attention to new problems concerning the Uithoftram which will start riding and the safety of the visually impaired. The warning bells and lights do not always seem to be synchronized.