We cannot allow women to be underrepresented in the top echelons of science, business and public administration, said the Dutch Minister of Education, Robbert Dijkgraaf, at an international conference on Women’s Empowerment.

In his speech, given in English to the G20 conference, Dijkgraaf said he was speaking not only as a minister but also as a scientist. In his view, science is of crucial importance to address challenges such as the coronavirus pandemic and climate change. “Therefore, we simply cannot afford to squander it.”

Unacceptable
Nevertheless, that is what's happening to some extent: women are underrepresented in the exact sciences, technology and mathematics and there is a risk the gender gap is going to widen even more, according to the minister, who thinks this is “unacceptable and unnecessary”.

But what can we do about it? In Dijkgraaf’s opinion, it all starts with high-quality, inclusive education. Girls should be aware that they are just as capable as boys of flourishing in these disciplines.

The previous Dutch cabinet introduced a bill to ensure that between one third and two-thirds of the members of the supervisory boards of listed companies are women. The legislation took effect this year. The idea is that top positions should not be held exclusively by men or women. Dijkgraaf stressed that targets are to be introduced for the public and semi-public sectors, which include higher education institutions.

Lagging behind
While women are still lagging behind in science, with STEM programmes continuing to attract more men than women, there has been a gradual increase in the number of female professors. Last year, for the first time ever, one in four professors was a woman. 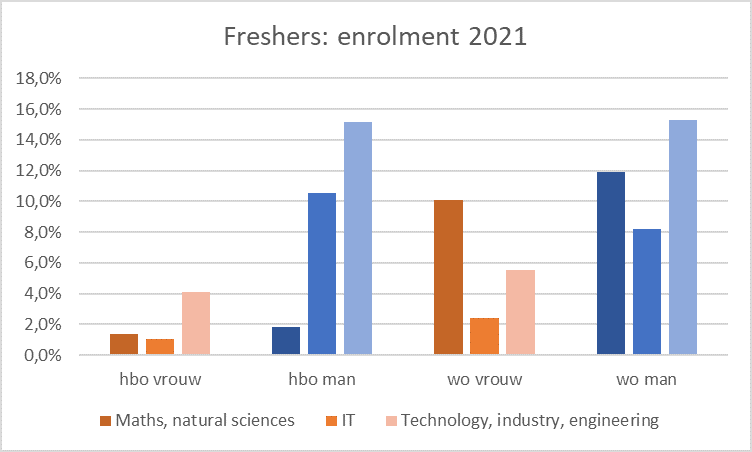