Working at Utrecht University as a disabled employee comes with its fair share of challenges. That’s why PhD candidate Maranke Wieringa helped founding Accessible Academia, a platform launched in December. While excited about the new project, Wieringa is so disillusioned with academia that they* decided to partially move to a different sector. “I exist in this space, but it’s not made for people like me.”

Maranke Wieringa (29) is a third-year PhD candidate in the Humanities department, researching algorithmic accountability in Dutch municipalities. They came to UU in 2015 for a Master’s in Media Studies, later joining the Utrecht Data School, and finally assuming a PhD position. Maranke is also a part-time wheelchair user. They can’t walk more than 15 minutes at a time because of a genetic collagen disease. “My condition is sort of progressive”, they explain, adding that they didn’t need a wheelchair when they first joined UU as a student. Their accessibility issues started in earnest around the time they became a PhD candidate. “I’ve been noticing the increasing barriers. There’s a correlation between me getting more impaired and the university turning out to be ever more inaccessible. That is what disables me.”

Luckily,Wieringa found out that there were many others struggling with similar issues in all universities in the Netherlands. That’s why the UUer is one of the founders of Accessible Academia, a new platform for people with disabilities studying or working at Dutch universities. The idea is to support this group, facilitate research and raise awareness of the problems they face. Launched in December, the platform has already gathered 139 subscribers to their newsletter. “We’ve been getting a lot of enthusiastic responses. It’s great to see this is something people needed”, says Wieringa.

"Although there are many initiatives at university level – UU, for example, has the platform Onbeperkt Studeren (Studying Without Limitations) and a network for those under the participation act – there was nothing at interuniversity level to amplify our voice and advocate for us”, says Wieringa. “There are so many of us out there, but we’re not that visible. We just wanted a place where we could safely discuss how to navigate academia and how to cope with the onslaught of ableist situations that you’ll invariably face.”

Asked to name a few examples of situations they’ve been through, Wieringa had a lot to say.

I was both physically and metaphorically at the margins 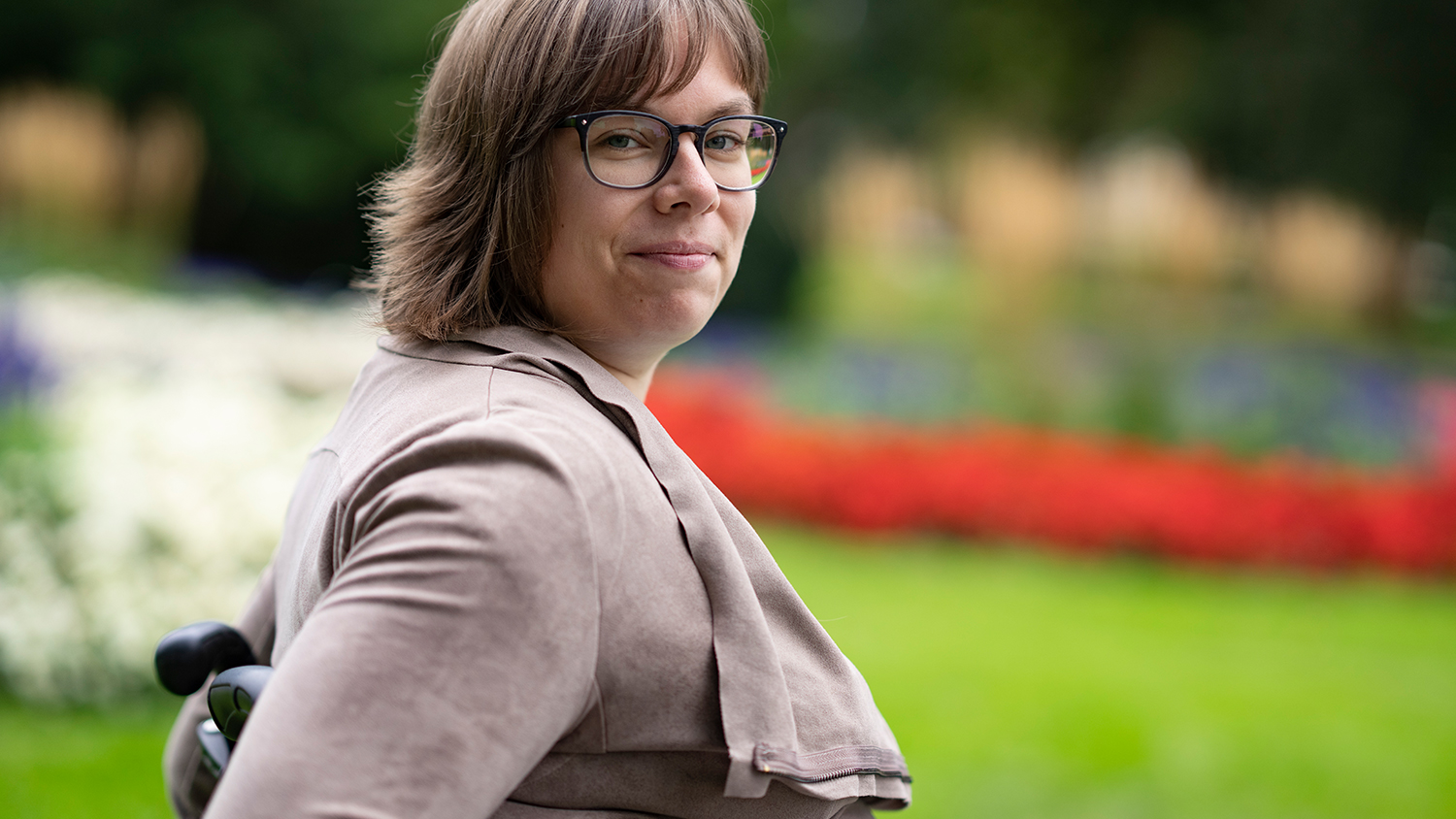 Due to her illness, Wieringa had to scale down their work from five to four days a week at the end of 2019, but due to administrative reasons the change only took effect in March 2020. Despite the reduction, they ended up having a burnout in July. In their view, ableism – discrimination in favour of able-bodied people – played a significant role in their burnout process. “There was this larger build-up of smaller incidents of ‘sorry, we hadn’t really thought of that’. I call it death by a thousand papercuts.”

The first papercut happened when they got accepted for a PhD. "I sent an e-mail to the department in May, saying I was going to start in September and I happened to know that the office of all PhD candidates was located in the attic of a historical building with no elevator. All in all, it took them nine months to devise a semi-solution: I ended up in an office by myself on the ground floor, while all of my peers shared an office upstairs. So I was both physically and metaphorically situated at the margins”, Wieringa recollects.

“ I suggested them to swap places with another department in the same building, but the other department refused to switch because they didn’t want to walk up the stairs. But hey, I can’t walk up the stairs!”, says the PhD candidate. “And doing a PhD is already lonely enough. I wasn’t able to have the same social connections: if I wanted to grab coffee with anyone, I had to WhatsApp them. After Covid hit, people went like ‘oh, it’s so hard not seeing my colleagues!’ and I was like ‘seriously? That’s literally what I’ve been put through for years!’”

Another papercut came in June 2019, when Wieringa’s research institute organised an event for PhD candidates. “It was a city walk. I e-mailed them saying ‘that’s great, but I can’t join’ and the answer was ‘well, we thought of you… But yes, unfortunately it’s not accessible.’”

Teaching can also be a challenge. “UU’s platform Studying Without Limitations was commissioned for an inventory of accessibility across the university’s buildings, but that inventory did not take into account certain things which are important for disabled lecturers. The investigation looked at whether or not one could enter the room with a wheelchair, but it didn’t look at which part of the room you can enter. So, it didn’t check whether a disabled teacher would be able to reach the white board or not. In many halls deemed accessible, I would actually have to lecture from the back of the hall”, states Wieringa. “More recently, I tried to schedule a large lecture hall that would be accessible to me, but I was told that the university doesn’t have any large lecture halls that are accessible to lecturers in a wheelchair in the city centre. I think that says a lot about who is able to speak in our society, who is expected to be knowledgeable.”

It’s like weaving a tapestry of Band-Aids, and every time one would fall off again

Accessibility is obviously an issue when it comes to historical buildings, but one would expect it not to be a problem with new buildings. However, Wieringa says that’s not always the case. They mention the new Veterinary Medicine building and its flexible way of working. “The moment I saw the promotional pictures, I noticed that the meeting rooms have bar stools. How would you expect a person in a wheelchair to join in the conversation?”

“That’s the thing. It’s not that people want to hurt us on purpose”, they explain. “It’s just that they don’t think of us. They don’t remember we’re there. And then we’re asked to suggest how to fix the issues, which is not our job. Disabled employees and students are constantly having to arrange stuff, so there’s all this extra work that we have to do just to get basic things going, such as having an office or finding a hall to teach. Other people don’t have to think about that.”

“And the thing about makeshift accommodations is that they’re usually dependent on one person, so when that person’s gone or sick, you have to fight that battle all over again. Everyone is trying their best to patch up the holes, but it’s like we’re weaving a tapestry of Band-Aids and every time one falls off. It’s exhausting not to have systematic solutions in place, therefore depending on a series of little goodwill fights, people going out of their way to help you. Which means you’re implicitly expected to be grateful. Well, I don’t want to have to be grateful for having an office, that should just be normal.”

One recent papercut took place in September 2021, after Wieringa had resumed working four days a week following a gradual post-burnout comeback. It concerns the lecture buildings at Drift 25, which is only accessible for people with a mobility impairment through an exterior elevator. “I asked if they could make the elevator accessible without a key, which you have to ask and sign for at the doorman in the University Library. That way, people would be able to enter that building on their own terms like everyone else, without having to be vetted by a doorman, which costs time, effort, and is degrading. Instead, I got an email a month later saying that I could pick up a personal key for the ‘invalids'’ (they are referring to the Dutch term mindervaliden, which literally translates as ‘less valid’, Ed.) elevator at the reception desk of Boothstraat 6. Looking up that building on UU's website, I learned that it is not accessible for people in a wheelchair. I politely pointed out that this was not what I'd asked for and that it was odd to arrange an inaccessible pick-up point. I never got a reply.”

I exist in this space, but it’s not meant for me

Although Wieringa is very excited about the new platform, they might not be part of academia anymore. All these papercuts have taken a toll, they say. “I’ve actually decided to start looking for another job, moving away from the university for the bulk of my time, though hopefully I’ll be able to finish my PhD with a small appointment. Once I obtain my PhD, chances are I will leave academia for good, despite being academically valued by my peers and supervisors, and winning prizes for my work. I feel as though I exist in this space, but it’s not meant for me, and I’m exhausted.”

Who knows what the future will bring for them, but when it comes to Accessible Academia, the image in Wieringa’s head is clear: “I really hope we can eventually be like Landelijke Netwerk Vrouwen Hoofdleraren (Dutch Network of Women Professors) or Promovendi Netwerk Nederland (PhD Network Netherlands), these big, influential groups advocating for their constituents.”

*Wieringa identifies as non-binary and prefers to be addressed by the pronouns they/their.

Accessible Academia soon to be looking for a student assistant
Accessible Academia is going to work according to three pillars: community building, advocacy, and research. The first pillar will be achieved through informal get-togethers, a Discord server, and career events in which senior academics with disabilities will share their experiences and tips. As for advocacy, the first plan is to create an ableism alert, similar to the sexism alert made by Athena’s Angels. But the group is also going to provide solicited and unsolicited advice to executive boards, serve as a source to the press, and write opinion pieces. The final pillar consists of connecting to other parties to facilitate research on disability and organise reading groups, lectures and talks.

The first event – a lecture and workshop with Dr. Nicole Brown (University College London), organised in partnership with UU’s Research School of Gender Studies (NOG) – is already open for registrations.

Accessible Academia has received a subsidy of 5,000 euros from UU’s Equality and Diversity Office (EDI) which will allow them to hire a student assistant for two hours a week to help them with administrative tasks. If you’re interested, stay tuned for the group is going to post a vacancy soon. There is no other source of funding at the moment, and the organisation is also looking for a home. “We’re talking to our partners to see if anyone is willing to host us more permanently,” says Wieringa.

USP Inclusive officially launched at UU
Another platform has been officially launched late last year for employees of UU and UMC Utrecht with a (work) disability or (mental) vulnerability. USP Inclusive is aimed at staff members with physical and/or psychological vulnerabilities working in the Utrecht Science Park, as well as those who are not in that situation themselves but are interested in supporting the group. "There are many staff members with disabilities and (mental) vulnerabilities who are not employed through the Participation Act. With this new platform, we want to make sure we reach everyone", explains network leaders Lisa Luchtenberg and Eveline Slappendel. The platform is going to organise workshops, network drinks and other activities to increase support and inclusion, and promote the personal and professional development of its members. Interested? You can sign up here.