Associations in trouble; members too 'mobile'

Association debate during the UIT of 2017, photo DUB

Utrecht student organizations fear for their subsidy now that a growing number of members is studying outside of Utrecht. This trend makes it increasingly difficult for associations to comply with the subsidy conditions of the University and University of Applied Sciences. The University Council argues to make those rules more flexible.

Mike Verschuur is studying at the VU Amsterdam, but he does live in Utrecht. Actually, he has been living in Utrecht his whole life already. If his study Economics at the UU had not gone wrong, he probably would still have studied in Utrecht. Now he is doing Public Administration & Organisational Science in Amsterdam. “I actually only go to Amsterdam for the lectures. That is fine in terms of distance. It's a small outing.”

Despite his study programme in Amsterdam, Mike moved into a room in an Utrecht student house and became a member of a student association in Utrecht. For Veritas he organized the big Hattrick party and during the lustrum this year he will be a member of the Terrein Praesidium. “My entire social life takes place in Utrecht. I would like to do my Master in Utrecht as well.”

They are students like Mike who caused trouble for many Utrecht student societies. The associations only receive subsidies for their activities and for their board members when 80 percent of the members study at the UU or HU. But those members seem to increasingly choose to study in another city. Sometimes they leave because a study at UU did not work out or they did not like it, and more often to do a Master's degree elsewhere after a Bachelor's degree in Utrecht.

Every ten minutes a train departs to Amsterdam

Student members of the University Council want the University to be more flexible regarding the important subsidy condition for associations because of this development. In a letter to the Executive Board, they suggest reducing the required percentage of UU and HU students to 70 percent.

UU and HU make almost 900,000 euros available annually to support the Utrecht student organizations. The institutions therefore take the position that subsidies should primarily benefit their own students, hence the so-called 80-20 scheme.

But according to the council members it is becoming increasingly difficult to meet that condition. Bachelor's students who do a Master's degree elsewhere will fall within 80 percent for another year. But according to the authors of the letter, there are also many students who take a gap year before they continue studying elsewhere or who do a multi-year Master's degree. In addition, there are many students, such as Mike Verschuur, who choose another study programme in another city after their initial Bachelor's program has failed, but continue to live in Utrecht.

“More and more organizations are reporting that they are having problems with that 80 percent,” says University Council member Eise Nota. “This is due to the growing mobility of students. Because of the central location of Utrecht, it is very attractive to stay here if you are going to study somewhere else. Every ten minutes a train departs between Amsterdam and Eindhoven.”

The letter from the council members can no longer formally affect the subsidy allocation for the next three years. This will be determined by the UU and HU in March on the basis of the current policy framework and information that the organizations have already provided this autumn. Nota: "But it can already help organizations if they know that in three years the criteria are more flexible."

A large number of members leave after the Bachelor

According to the Federation for Utrecht Associations (FUG), the subsidy scheme for the seven affiliated associations is extremely problematic and at this moment some already do not meet the requirement. Apart from UVSV and Biton, it concerns the Utrechtsch Studenten Corps (USC). Rector Olle Verschoof reports: “We are just below, at 78 percent.”

Verschoof understands that UU would like university money to benefit their own students, but he also thinks 80-20 is no longer realistic: “Almost all our members are doing their Bachelor's degree in Utrecht, but a good number of them fly out to another city for a Master's programme. Because our members have been active with us for five years, these Master's students ensure that the percentage of UU and HU students is just under 80 percent.”

Moreover, the USC rector believes that the importance of an 80 percent requirement must be put into perspective: “The majority of the subsidies are intended for the grants for Board members which consist of UU and HU students, who can thus individually develop and experience managerial experience. This is more important than the question whether the organization now has 70 or 80 percent UU and HU members?”

Read more under the photo 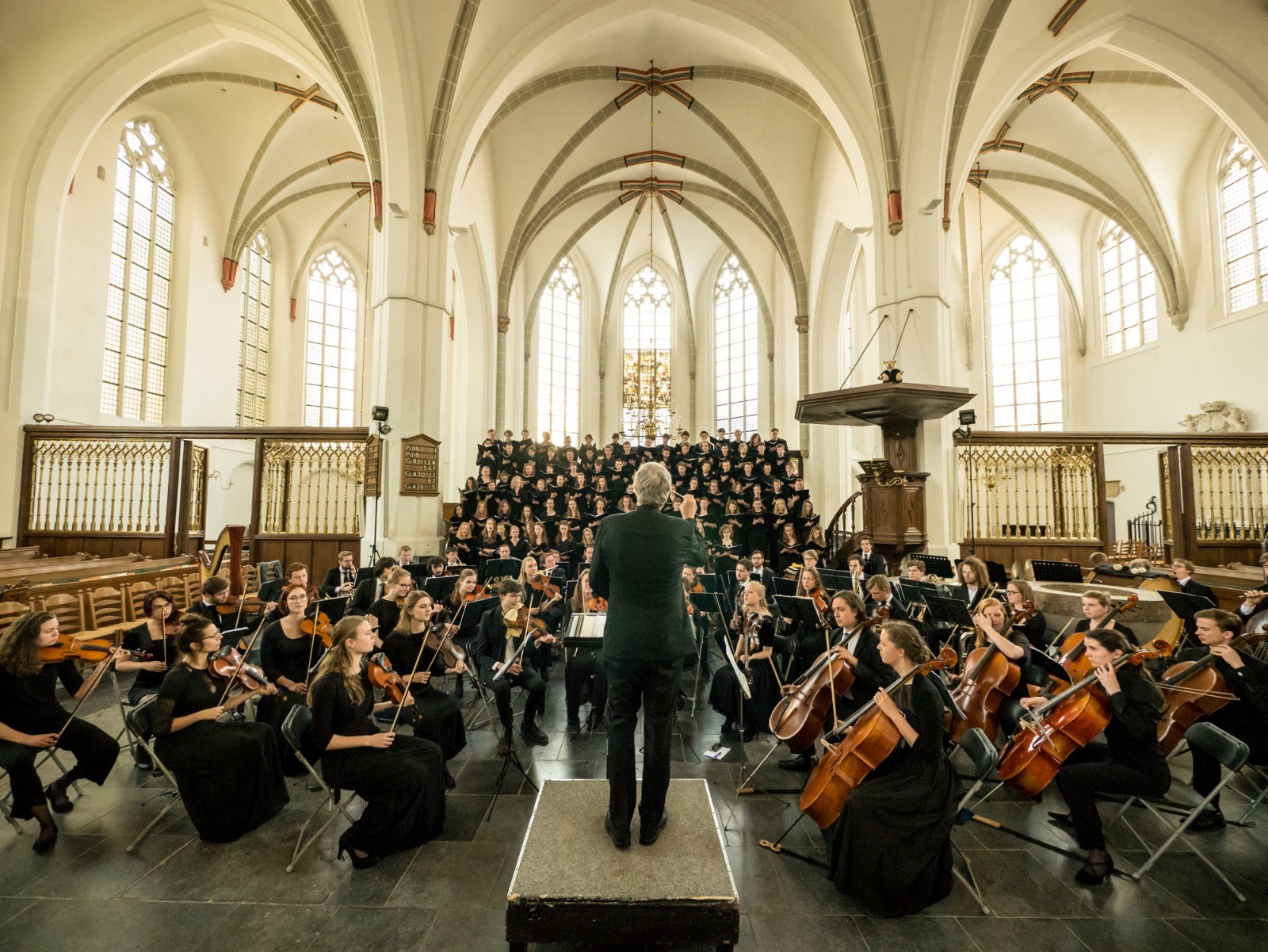 A concert by the Utrecht Student Choir and Orchestra (USKO)

The eight Utrecht student music societies are also struggling with the university subsidy requirement, according to the umbrella organization Kosmu. Apart from the problems of students studying elsewhere, the societies have to deal with many members who want to stay connecting after completing their studies. There are also relatively many HKU and conservatoire students, and these students do not count as UU or HU students. At the moment there is one society just below the limit of 80 percent, Kosmu does not want to say which association this is.

According to the Kosmu it regularly occurs that members who no longer study or study elsewhere are asked to resign. An undesirable situation, according to the organization. Especially because it often concerns musicians who can make an important contribution to the high artistic productions that the companies want to make.

A few years ago, the Utrecht Student Choir and Orchestra (Usko) was forced to ask members to leave the association. Since then, the association keeps track of when members graduate and in which city they study. They also pay attention to this when new members are accepted, orchestral coordinator Dorien de Gier says: “The choir is full now, but every year we look at whether we can allow people who do not study at the UU or HU. This is more difficult for the orchestra; not enough suitable candidates are available for every instrument.”

According to De Gier, the Usko is not so much burdened by the students studying in other cities but more the former UU or HU university students who prefer not to leave the association. “We would prefer to allow everyone who enjoys being a member with us, on the other hand, I also understand that we have to remain a student association for the subsidy providers.”

Maybe we can increase the budget

It is clear that the total subsidy budget for associations will not grow. The UU has been honouring that position for several years. In principle, therefore, a different percentage arrangement can only lead to a different distribution among the organizations, resulting in winners as well as losers.

For this reason, the University Council student members argue that the UU should investigate whether other Utrecht educational institutions can pay for the support of the student organizations as well. Eise Note: “With that you could increase the budget.”

He notes that institutions such as the HKU University of the Arts Utrecht, the University for Humanistic Studies and the Marnix Academy of Applied Sciences do financially support the Utrecht introduction period. “And that is exactly the place where the associations recruit their members.”