A brand new university song: ‘It might take some getting used to for some people’

The new university song for Utrecht University will finally be presented during the start of the academic year on Monday. Rosa Falkenburg wrote the song. How did that go, and what choices did she make in writing it?

At the time of publishing this article, the song remains strictly secret. On August 31, the day of the Start of the Academic Year, a mail will be sent to all students and employees of the UU, with a link that will lead them to the song.

The new university song is one to sing along to, says Rosa Falkenburg (29), programme coordinator for Parnassos Cultuurcentrum. But singing together in the Dom church won’t happen this year, now that the start of the academic year isn’t a big, live meeting.

The song was originally planned to be launched during the 384th Dies of the UU, this past March, in the Dom church. A delegation of Dekoor Close Harmony and a band were to provide musical support to Falkenburg, and after one round of listening, everyone in the Dom church was to sing along.

That didn’t happen. With the coronavirus and subsequent lockdown, the Dies was a sober, digital affair. The festive start of the academic year will also be different than usual, and a live performance of the song will not be a part of it. “Given the limited possibilities, a live performance would sacrifice some of the quality of the song,” says Marieke van Merriënboer, director of Parnassos and jury member in the selection of the UU song. For that reason, a professional recording and video have been made of the song, for everyone to listen to when they want, without being bothered by, for instance, a slow internet connection in a livestream. 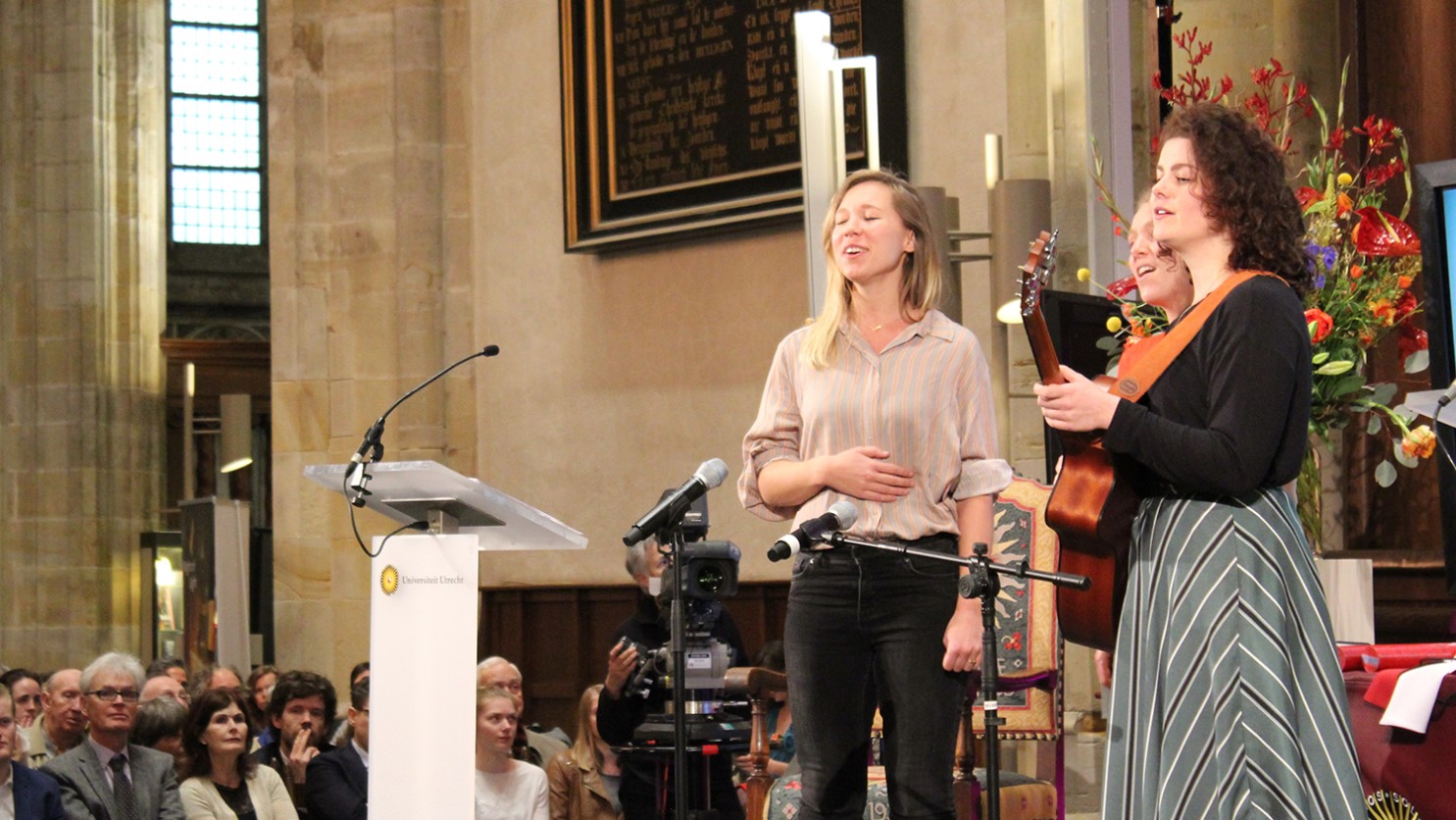 The song Falkenburg wrote – the title of which will also remain secret until Monday – will soon be the only official Utrecht University song. It’s meant to replace the traditional songs that were usually sung during university ceremonies and festivities. Discussions on the university’s intranet proved that people had mixed feelings about this, because many do value the previous songs like the Io Vivat and the Gaudeamus Igitur.

Rector Henk Kummeling, however, claimed it was high time a new song was introduced, one without (to give an example) misogynistic parts. “The Io Vivat and Gaudeamus are both songs for young, drunk, Leiden men,” he said at the time of the Dies.

What do you feel about that, Rosa? Will you miss the Io Vivat?
“I don’t feel much at all about that, but I understand the sentiment. I went to a ‘gymnasium’ [a secondary school that prepares students for university and includes the study of Latin and Greek, ed.], and we also used a lot of Latin in our sayings and songs. I still don’t know exactly what we sang. I think we’re living in a time in which people do want to know what they’re singing. And the consideration that should always come into play with traditions, is whether there are people who have negative associations with them, and then choose whether or not to change the tradition.

“I see my song as something separate from the Io Vivat. There was simply a competition, I participated, and I won. If none of the submissions had fit the requirements, no song would’ve been chosen. With that message in the back of my mind, I believe that my song is good (enough), otherwise the jury wouldn’t have chosen it.”

The song lyrics had to be written in either Dutch or English. Why did you choose to write in Dutch?
“We’re all very focused on inclusivity of course, but I think you shouldn’t confuse inclusivity with ‘everything should be in English’. What’s more fun than getting to know the language via the song of the university where you’re working or studying? Moreover, learning a language with music is even easier. If nothing else, you can sing along phonetically. I myself would be very disappointed if I were to study in Sweden and their song would be in English. But I do understand the discussion. The entire song is in Dutch, but I have translated the chorus to English, so that could also be used for special occasions.”

And there’s a little bit of Latin in the song as well, right?
“Yes, the phrase ‘Sol Iustitiae Illustra Nos’ (Sun of Justice, Shine Upon Us, ed.) had to be included in the lyrics. That was quite tricky to rhyme with. There were a number of other requirements. It had to be about the university’s history, the connection with the city of Utrecht, and about students and researchers.”

What was your inspiration?
“Mainly my own experience and connection with the UU. I studied Theatre, Film, and Television studies at the UU, and I’ve been an employee at the UU for a few happy years now. In my student days, I was also a choir singer with Dekoor, which was here at Parnassos, so my time as a student was spent here.

“I wanted to create a song that echoes enthusiasm for the institution we’re working for and studying at. I also wanted to include the different aspects of the university: it’s not just about ‘the student’ or ‘the professor’, but about the entire university community.”

What does the song sound like? Are you allowed to tell us anything about that?
“It’s a modern, cheerful song. And it’s really a song to sing along to. I don’t want to say it’s a carnival song, definitely not, but it’s a lot more modern than the traditional songs. That might take some getting used to for some people.”

When you say ‘cheerful’, I think ‘up tempo’. Am I right?
“It was when I was writing it, but in the end, I did slow the pace down a bit. Usually, you would sing this song in a large group, in a church. You have to take that into account, because it echoes a lot. And everyone needs to be able to sing along to it. A funky beat wouldn’t work, for instance, no matter how fun that would be.

“You can shorten or lengthen the song as you wish. You could sing the chorus only, or the first part, if you want a shorter version. Or you can add an instrumental solo somewhere and make it three times as long. The version we’re recording is a nice pop song length: three minutes and change.”

Why did you participate in the competition?
“I think I just saw the message on intranet somewhere, in the report of last year’s Dies. I’m a true intranet nerd, so I always read those things. And well, I felt called. Because I’m a singer-songwriter, and I’m connected to the university. I wanted to at least try it.”

Did you feel a lot of pressure?
“The advantage of a competition is that you can simply think: ‘I like this idea, and if you like it too that’d be great, and if not, that’s also fine’. I let it lie for a bit and then worked on it in the summer of 2019. I spent five weeks in Barcelona working on my music, so I had the time. I started with the lyrics and then added the music, followed by endless tinkering with the words. You know what they say: ‘it ain’t final ‘til it’s on vinyl’.

“I wrote the song ‘plain’: just the melody, chords, and lyrics. But if you want to play it with a band, you need someone to write music for drums, bass, violin, etcetera. That’s what Christopher Mac-Carty did. He’s the conductor for Dekoor, and a fantastic arranger.”

Your lyrics and composition were chosen unanimously from thirty submissions. How did that go?
“The jury consisted of, among others, Henk Kummeling, Marieke van Merriënboer, Tim van Esch from the band Handsome Poets, and Tom ter Bogt, professor of pop music. They were all immediately enthusiastic about my song, but they did initially have some questions and suggestions. I followed up on some of them, because I agreed completely with some things, and I didn’t follow up on some others. They were just small adjustments in the lyrics, and the jury said I should listen to my own voice in that.”

Aside from eternal fame, did you win anything?
“Yes, 1,000 euros, which I will partially spend on a small drum computer I’ve had my eye on for a while.”

What happens when your song becomes ‘outdated’ after a while? What would you think if, for instance, it’s replaced again in three years’ time?
“I haven’t thought about that much yet. We live in a time where we’re critically analysing many traditions, and wondering whether we still want them. And of course it would be great if people can tell their grandchildren that the university song they’re singing started here. But it’s possible that it doesn’t work like that, in today’s ephemeral society.”

(song added to this article on August 31)