Can you travel coronaproof to your classes this week?

The lectures start again this week. Most courses still take place online. Approximately one third of the lectures will be on location. The question is: how to get safely through the traffic jungle at the Utrecht Science Park without having to catch the coronavirus?

It will be quite a challenge not to get infected with Covid-19 from September onwards if you have to travel to Utrecht University. The university realises that too. "That's why extensive consultations have been held with the other institutions at the Utrecht Science Park, the municipality and transport companies," says Maarten Post, spokesman for Utrecht University. "For us, it's not just transport that we've looked at, but our own capacity in particular. The buildings are set up at 1.5 meters, which means that we can only teach about 30 percent of the education.  So a lot of education has to stay online, which means that there are far fewer students on their way to the Science Park than usual. However, additional measures have been taken, and we will monitor how things work out in practice this week 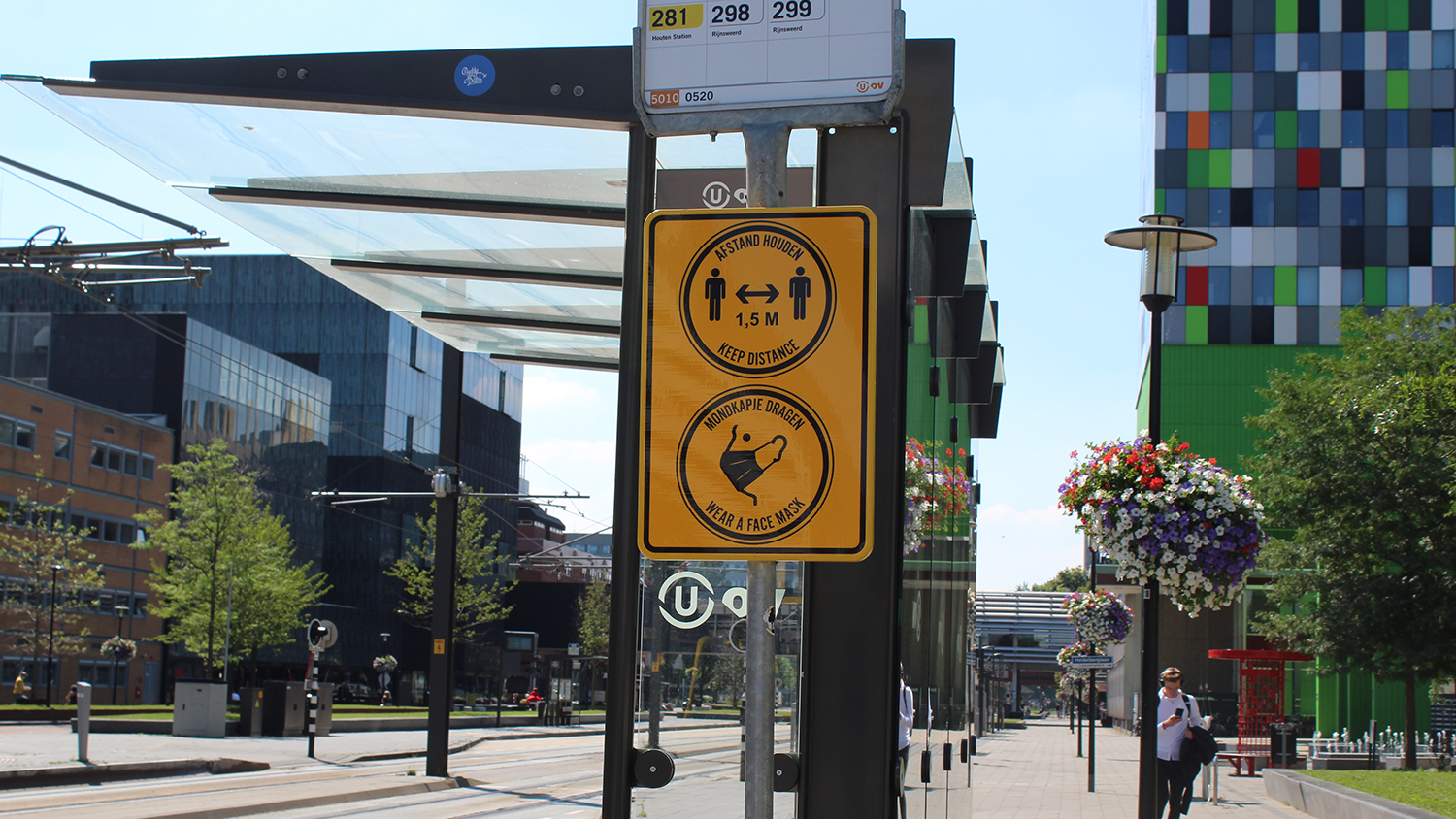 Additionally, it has been agreed upon that the increase in traffic (pedestrian, bicycle, car, public transport) will continue to be monitored in the coming months. They will look at the hustle and bustle and how the participants experience it in terms of safety. One spot to keep an eye on is the little square around the Spar where it was already quite busy last week.

A metre and a half distance on the bike
Keeping a distance on the bike paths in the city or in the direction of the Utrecht Science Park can be difficult. Local authorities are trying to spread the flow of cyclists to the Utrecht Science Park. For example, there is the so-called Herenroute where you are led from the station via the Herenstraat to the Uithof. Arrows on the road have to indicate the alternative route to the students.

In addition, consideration is being given to how the bottleneck at the Krommerijn swimming pool can be tackled by a new cycle path in Rijnsweerd.

The biggest task is to keep the cyclists at a sufficient distance from each other. At the traffic lights, the cyclists stand close to each other. In the spring, the Utrechts Nieuwsblad reported about an incident in which a student addressed another cyclist because he was too close. The cyclist was not very accommodating and attacked the student.

"Keeping enough distance on the bike paths will indeed be difficult," says Roland Geraerts of Ucrowds. Ucrowds makes computer simulations of crowds. These simulations can also be used to see whether enough distance can be maintained in traffic. According to Gerearts, this is not easy to organise. "Keeping a distance of a metre and a half for cyclists in the city centre and in the direction of the Utrecht Science Park is going to be difficult. Even if only part of the lectures will be given and part of the staff will continue to work from home," adds Geraerts.

Frans de Winter, who has been commissioned by the municipality to conduct research into the experience of cycling crowds, also thinks that the metre and a half is an impossible task. "My expectation is that you can't keep your distance on your bike. Even if, for example, only forty percent of the number of people who normally travel through the city or to the Utrecht Science Park take the bike. It's normally quite crowded already".

According to researchers from KU Leuven and Eindhoven University of Technology, a metre and a half distance between cyclists is not even enough either. The research is clear: according to the researchers, if you don't want to run the risk of infection, you have to keep ten metres away from other cyclists. Cycling behind someone would also increase the risk of infection. It would be best to cycle next to someone or diagonally behind someone. That would be completely impossible for Utrecht. Fortunately, other studies have shown that contamination in the open air is not as bad as it seems. 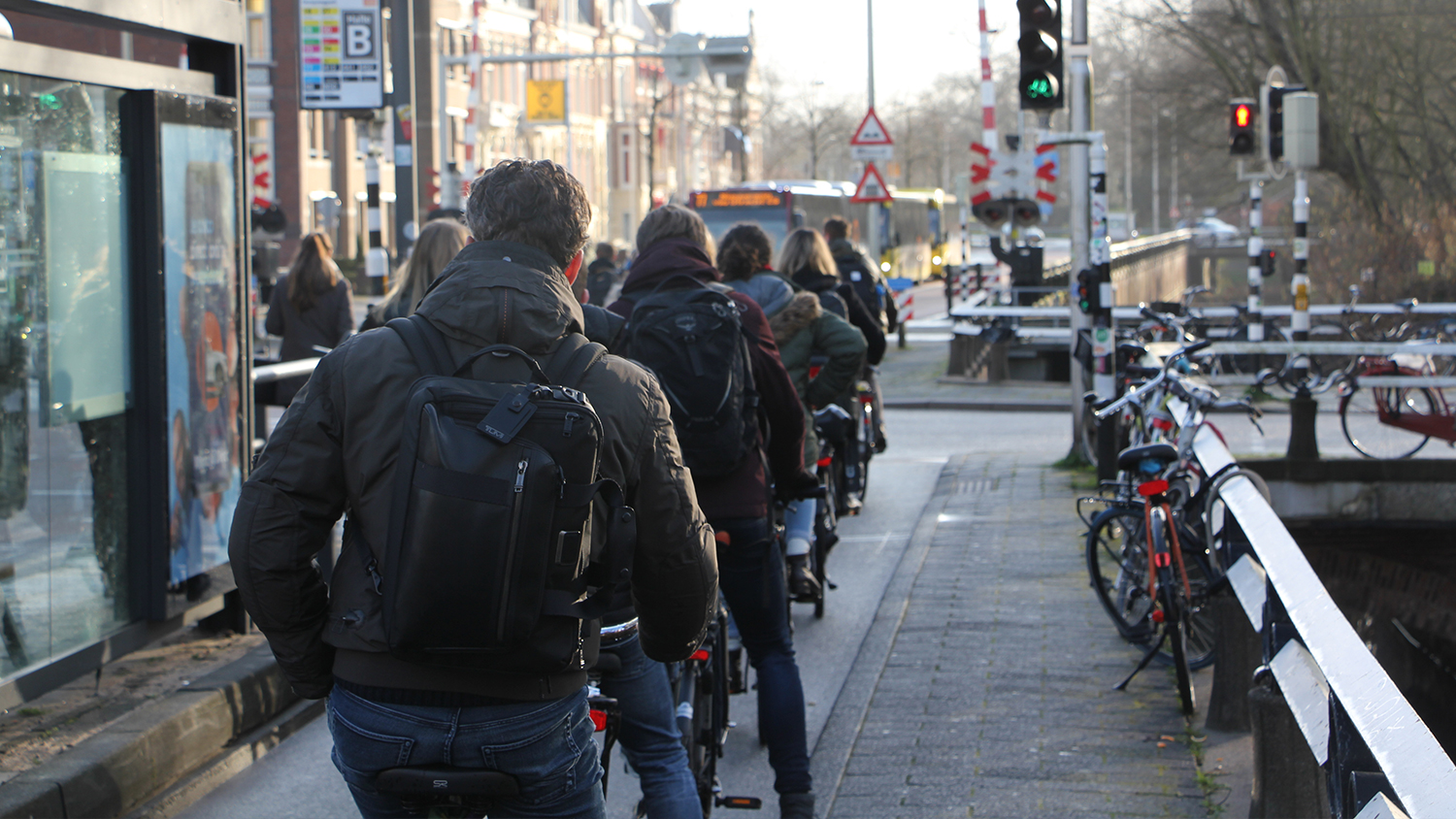 Travelling by bus and tram is your own responsibility
By monitoring the bus lines, the Utrecht bus operators try to keep an eye on which routes seem to be getting too busy. Qbuzz, the bus operator in the city of Utrecht, uses extra buses (in Dutch) to prevent the lines from getting too full. "If possible, we will deploy extra capacity," says Lisa de Goede, Qbuzz' press officer. The regional carrier Syntus Utrecht is also deploying more buses in the region. For example, there will be more direct buses from Amersfoort to the Utrecht Science Park.

"In the end, it is the responsibility of the traveller to keep enough distance on the bus," adds Lisa de Goede. "We take care of the conditions as well as possible". "The bus driver is not a policeman," adds Maxim Meijers, Syntus' spokesperson. "If the bus is too full, he will report it and then we can take measures for later. But he won't take action on the spot.

However, there is also concern, especially when it comes to boarding and disembarking at the stops. The Utrecht Science Park Foundation announced last week that it has been decided to deploy traffic controllers during peak hours to prevent people from getting too close to each other. The platforms will also be expanded and people will be asked to already put on a face mask at the stops.

Together with Moventem, the province of Utrecht investigated whether corona influences the use of public transport. From that research it emerged that people are quite cautious so far about using the bus or tram again, says Ron van Dopperen, spokesman for the province. "The face mask appears to be an extra threshold for many people.”

He suspects that because of this inconvenience, people work at home more often. "That's actually a good thing. Traffic and public transport are overloaded." Van Dopperen calls it a tiny blessing in disguise. "If people continue to work at home more often in the future, it will benefit public transport and the traffic load in the city. There was an increase in traffic anyway. Without the coronavirus, we would have had the same discussion in a few years' time.”

Spread travel in the train
So far it's pretty quiet in the trains. The question is whether this will be different next week when the lectures start again. The government and educational institutions first had the plan not to allow students during the rush hour. Students were subsequently only allowed to travel between 11 and 15 hours by public transport. This plan seems out of the question. In the new academic year, the University and the University of Applied Sciences start with lectures in the morning as usual.

The NS has announced that starting this week it will monitor more strictly whether the corona measures in the train are being followed. At the moment, this is mainly done with images that point out the 1.5-metre distance and emphasise the obligation of the face mask. These two images can be seen throughout the station. In addition, during the journey conductors will point out to the passengers the obligatory face mask and the importance of keeping the distance. In the train itself, green stickers will indicate where one is allowed to sit. 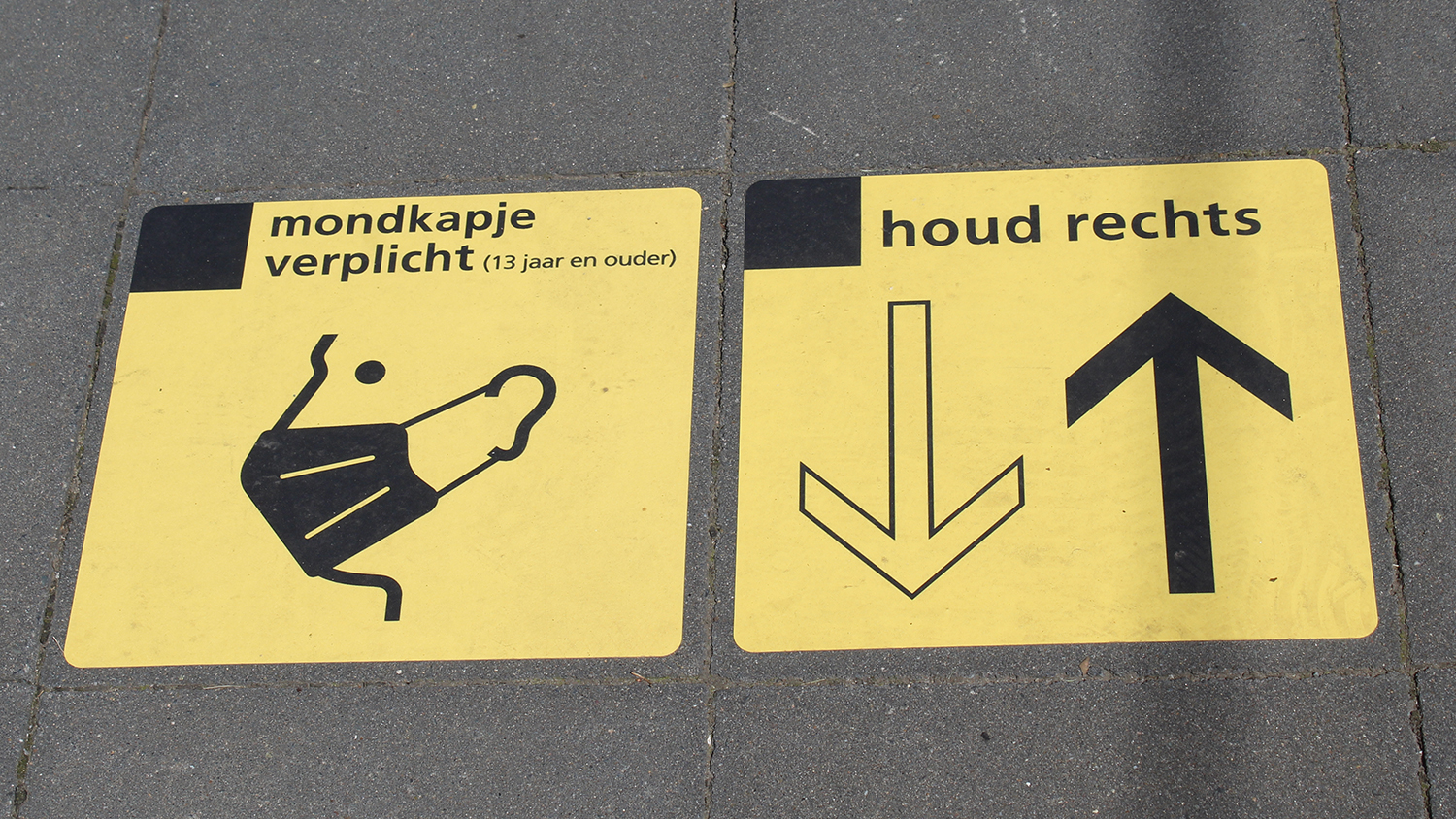