Since the beginning of this calendar year, consecutive construction work has been taking place around student housing building Casa Confetti in De Uithof. Residents are sick of the lack of communication about the work, and have to deal with a lot of noise pollution. Utrecht University hopes that structured dialogue will ensure increased clarity about the work.

Ever since the summer of 2016, Casa Confetti has been surrounded by construction work. That summer, work began on the creation of the tram tracks in front of their homes, which took over a year. The sand had barely been swept away when new construction work was announced. In the spring of 2019, the road of the new Uithoflijn was renovated. Repairing the so-called combi-topcoat came with a lot of noise, and was generally done around midnight. At the same time, Utrecht University started rearranging the Leuvenplein. All in all, a great time for the residents of Casa Confetti. “At night, we suffered from the road renovations, and at 7 am, the next bit of construction noise started.”

That wasn’t all. In July, the UU started its reparations of the roof of the Ruppert building, which is located right next to Casa Confetti. That work was supposed to be completed in August, but are still continuing to this day. “They recently started working on the exterior walls of the Ruppert,” the resident says. “That means every Saturday, a huge generator will be buzzing loudly, to provide power to the pressure washer. So now there’s even noise pollution on the weekends. The agreement was that no work would be done before 8 am on weekends, but a few weeks ago, they’d start at 7.30 am with both work and loudly yelling builders. This past summer, we even had days with noise at 7 am, from the repairs of the Ruppert building roof.” 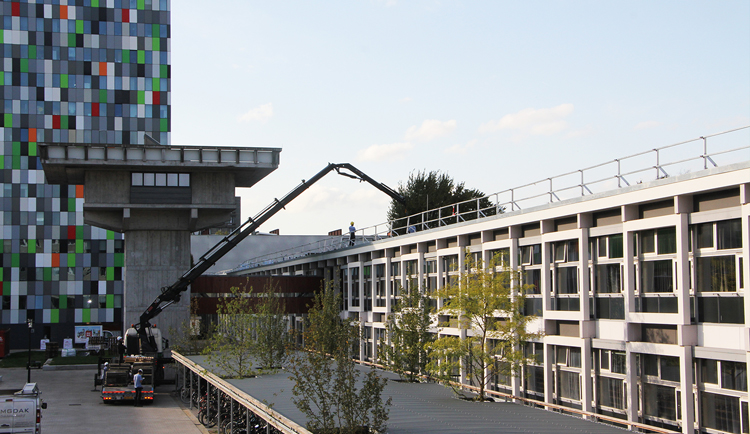 Repairments on the roof of the Ruppert building.

The residents have filed numerous complaints, and regularly sought contact with both municipality and university. However, this proved fruitless at times. The Leuvenplein especially turned out to be a quite the headache: the agreement with the builders was that the noisiest work would be conducted between 7 and 9 am, so it wouldn’t bother the morning classes. The result of this agreement was that there was little regard for the residents of different Uithof buildings, the residents say. “We repeatedly filed complaints about the Ruppert building with the UU, but they’re either not dealt with, or too late.”

Complaints change nothing
Of all the construction work, the work being done at the David de Wied building is the last straw. Mardie has been living in Casa Confetti for quite some time, and is sick of the nuisance. “They started drilling in concrete at 6.30 in the morning. How can you not realise this would cause a disturbance? Are they even thinking of the Uithof residents at all?”

Mardie says all complaints have to be filed in the same manner. “You send a message to the university, they send you a reply, and then nothing changes.” After a heap of complaints, the UU took the initiative to hold a meeting, back in June. Together with another resident, Mardie spoke with the Leuvenplein project group. “It was a pleasant conversation, in which they showed interest, and thought about how to improve the communication. That, thankfully, did improve after the meeting, and I do feel like the noise pollution was less bad afterward.”

In response to the nuisance caused by the construction work around and at the Leuvenplein, the project group also offered the Casa Confetti residents a food truck. “A food truck is a fun idea,” Mardie says, “but shortly afterwards, the next construction work was announced. That kind of dampened the enthusiasm for the food truck.”

Another Casa Confetti resident, who’s had a lot of contact with the university, is critical of the communication. “Any work that deviates from the original plan is never announced beforehand. You have to send an email to receive any information at all, and often, you have to try to get in touch multiple times before you actually receive an answer to your question.”

Communication UU and Casa Confetti
Recently, the Student & Starter Party sent in questions to alderman Victor Everhardt, in charge of real estate. The party wanted to know whether Everhardt knew about the nuisance the construction work caused the Casa Confetti residents. He responded that he’s aware of it, but that a central contact point has since been established, as well as an app, which the residents can use to ask their questions. He also started that no rules were broken during any of the work. RTV Utrecht wrote a short article about this, which then received a lot of fiery responses from Casa Confetti residents in a closed Facebook group. “That tone of downplaying things really bothers me,” someone responds to the shared article. “It feels like we’re kind of painted like whinging cry-babies,” another says. At the urging of the Confetti residents, RTV Utrecht eventually wrote a more elaborate article, written from the residents’ side in mind.

It’s true that at the start of the Leuvenplein work, a university app was launched, which contained information about different projects. The app can also be used to file complaints about, for instance, noise pollution. “We started the app for the construction work at the Leuvenplein,” says Ruut van Rossen of Corporate Real Estate & Campus. “That’s when we received the first complaints. An app is also available for the work at the David de Wied building.” 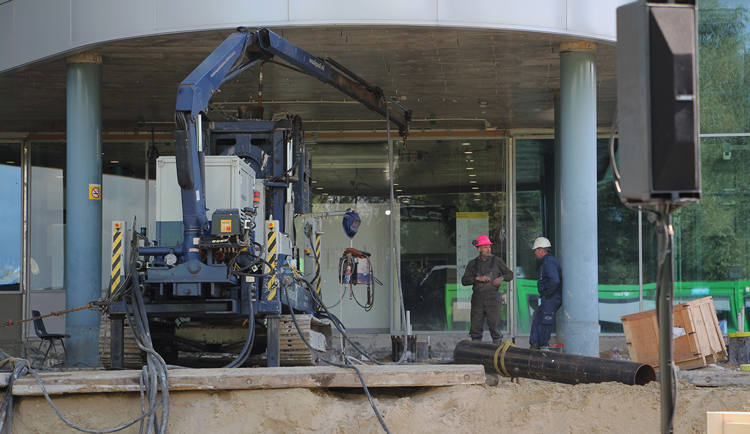 This is confirmed by the Casa Confetti residential board, which is actively involved with the complaints of fellow residents. The board regularly speaks with the university. They also communicate about the work in the building’s surroundings in the Facebook group. “The residential board is actively working on all the noise. It’s only since the Leuvenplein mess that we’re also kept up to date about all other construction work.”

“The construction work comes from different parties, which makes it harder to communicate,” says chairwoman Gitte Mulder. “Additionally, it happens that agreements aren’t lived up to, and sometimes, there’s a lack of clear information, and no adequate responses to complaints.” Gitte confirms that work has started before 7 am on occasion, as well as on weekends. “For some of our residents, this has meant that they weren’t able to stay in their studios for a while. Others have said that they didn’t sleep well, and were barely able to study during the day.”

The Confetti resident does want to emphasise that there’s a lot of understanding for the maintenance of the buildings and the nuisance that comes with it. “It’s unfortunate that a lot of the work is either done at the same time or shortly after the other. I can understand that construction work comes with noise pollution. We can accept that, and we do, but sometimes, excessive noise can be prevented or lessened. The builders now use their tools in a closed space, so we can’t hear the noise the tools make quite as much. But unfortunately, they didn’t always do that.”

Discussion
Recently, it was agreed that the university, the residential board, and other parties will meet every six weeks. “We’re coming together to see how we can prevent nuisance as much as possible in the future, and how communication towards us can be improved. We’ve got a good feeling about this, and we hope it’ll help,” Gitte says.

In the wake of the complaints, the university discovered that the contractor working on the David de Wied building wasn’t holding onto our agreements, says the UU’s Ruut van Rossen. “It turns out he’d been doing work that wasn’t included in the contract, outside of the correct timeslots.”

The university took the initiative or the meetings with the Casa Confetti board. “During these periodic meetings, we’ll reflect on the past weeks, talk about work that’s scheduled for the near future, and what the effects of those plans might be. If needed, we’ll make agreements about this.”

Some construction work on the Leuvenplein is scheduled for November, when trees will be planted. “That in itself won’t come with a lot of noise,” Van Rossen explains, “but the trees will likely be planted with the aid of some machines. The machines’ engines might cause nuisance as well. For that reason, we made a deal with the project manager to start at the other side of the square, and work towards Casa Confetti.”

Early birds working
The issue remains, however, that a lot of noisy work is conducted between 7 and 9 in the mornings. The government’s Building Decree states that construction work can start at 7 in the morning. Because the core of the university is its education, the decision was made to allow most of the noise pollution from construction work in the early mornings, before classes start. “Especially with the Leuvenplein work, classes were taken into account as much as possible. That meant that heavy work, such as drilling in walls, was done in the early mornings. In the end, it’s our responsibility to think about the possibilities in which there’s the least amount of nuisance for everyone.” 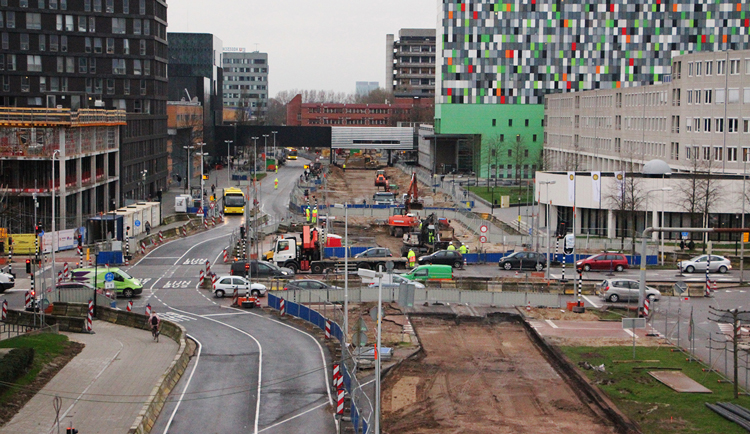 Construction of the tramway for the Uithoflijn in 2017.

During the summer weeks, Casa Confetti residents complained about noise pollution in the early mornings. They thought it curious that even in the summer, construction work started very early, considering there’s barely any courses taking place in those weeks at all. That wasn’t quite the case, Van Rossen knows. “Even in summer, there are courses at times, or other educational meetings. Unfortunately, we don’t have a great overview of when exams, classes and meetings take place. That’s why it’s hard for us to decide when we can and cannot schedule daytime construction work that wouldn’t disturb students and employees at the university.”

For the time being, there’ll still be quite a lot of work taking place surrounding the student housing building, such as the expected renovation of the Van Unnik. One of the questions residents have, is whether there’s a possibility for financial compensation for the residents. “No, we don’t do that,” Van Rossen says. “A lot of these activities are outside our influence. We don’t always have an eye on everything contractors do, and can only adjust things where needed. We’re not able to give away money that’s meant for research and education.” Van Rossen does want to say that something nice is being planned for the residents, and that they’re invited to a celebratory happening late November.

Tram tracks – rearrangement Heidelberglaan is a long-term project, but in April/May 2019, work on the bus and tram tracks took place at the front side of Casa Confetti, roughly between 11pm and 1am.

Leuvenplein – February to mid-August 2019, but more work is scheduled, such as planting trees, and placing containers, in November 2019

Roof of the Ruppert building – July to August 2019, but still taking place

Still scheduled to take place from 2020 on: renovation Zonneveld wing and the Van Unnik bulding.