Charm EU – the university of the future?

This past September saw the birth of a new Master’s programme at UU: Global Challenges for Sustainability. What is special about this new programme is the fact that it is partially taught in UU&#39;s premises, but it is officially part of a different university called Charm-EU, which consists of an alliance of five European universities. UU is one of them. DUB took a peek one month ahead of its launch and wonders if Charm EU is initiating a new trend in the higher education sector.

Charm-EU is an innovative, highly ambitious project with an undeniably European approach. One of its goals, for example, is "to promote and strengthen common European values." And that’s exactly what sets it apart from other international consortia. With Charm-EU, the universities of Utrecht, Barcelona, Dublin, Budapest, and Montpellier are building the foundations of a new European university. The UN Sustainable Development Goals (SDGs) are at the heart of the initiative, serving both as inspiration for the institution’s core values and for the education provided to its students.

At the same time, there’s a sensitive, geopolitical issue concerning the 1.5-year programme. One of the partners is the Eötvös Loránd University, in Budapest. Tensions have been running high in the past few years, and even more so in the past few months, between Hungary and the European Union because of the consistent undermining of European values on the part of the Hungarian government, a self-titled "illiberal democracy". The most poignant example are the recent steps Hungary took to reduce LGBTQ+ rights in te country, something that durectly opposes one of Charm-EU's core values: inclusion.

Even so, there aren’t many concerns about the safety and academic freedom of students traveling to Hungary. Asked whether there are any plans in place in case the political situation deteriorates even further in Hungary, Jan Haarhuis, one of the pioneers of the project as well as the former director of Educate-It, states: “There aren’t any such plans at the moment and there is no reason for those plans to exist.” According to programme leader Marjanneke Vijge, the Hungarian university truly shares the same core values. “That push for inclusion is mainly coming from Budapest, especially from the staff there,” she says. 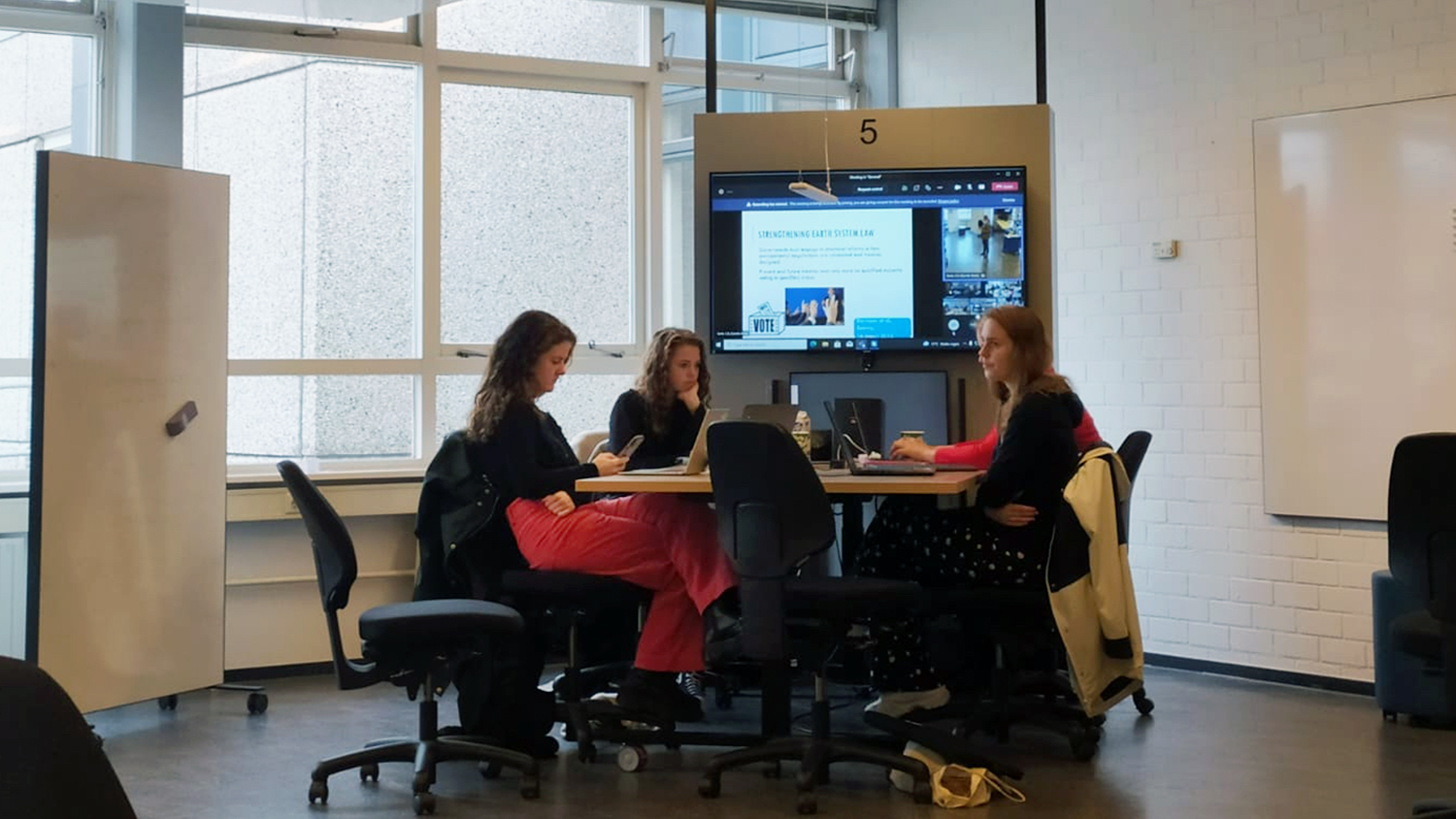 A test bed for innovation
The innovative character of Charm-EU lies in the fact that it provides room for all sorts of didactic experiments. Vijge says that’s a key reason behind UU's interest in participating in this programme. “The idea behind Charm-EU is that it’s a sort of test bed – we can experiment and see how far we can go with different teaching methods.” One example is the future learning space, where hybrid classes are taught.

DUB took a peek inside this unique learning environment, which is both online and offline. The students from the five universities attend class at the same time, from their respective countries, while the class is taught in real life on one of the campuses. In the other four, the class is broadcast live and students can collaborate with all classmates through an ingenious system of screens. “I’m in a group with girls from Montpellier and Budapest, and it’s working really well. We can chat and work together online,” says one of the students.

In practice, the hybrid classroom doesn’t differ much from the offline classroom. Before class starts, someone flounders with a PowerPoint presentation and most students enter the room just in time (or a little late). Then, a group of students listens attentively while others get distracted by Instagram and WhatsApp. Perhaps this demonstrates the success of the format: the hypertechnological nature of the class soon feels like the most normal thing in the world.

But mobility is also important for Charm-EU. The idea is that students do not stay at the university where they begin their Master’s, but rather spend period of a month to six months at the other universities, attending classes there. The experience is meant to make students feel like they’re truly part of a European university community. 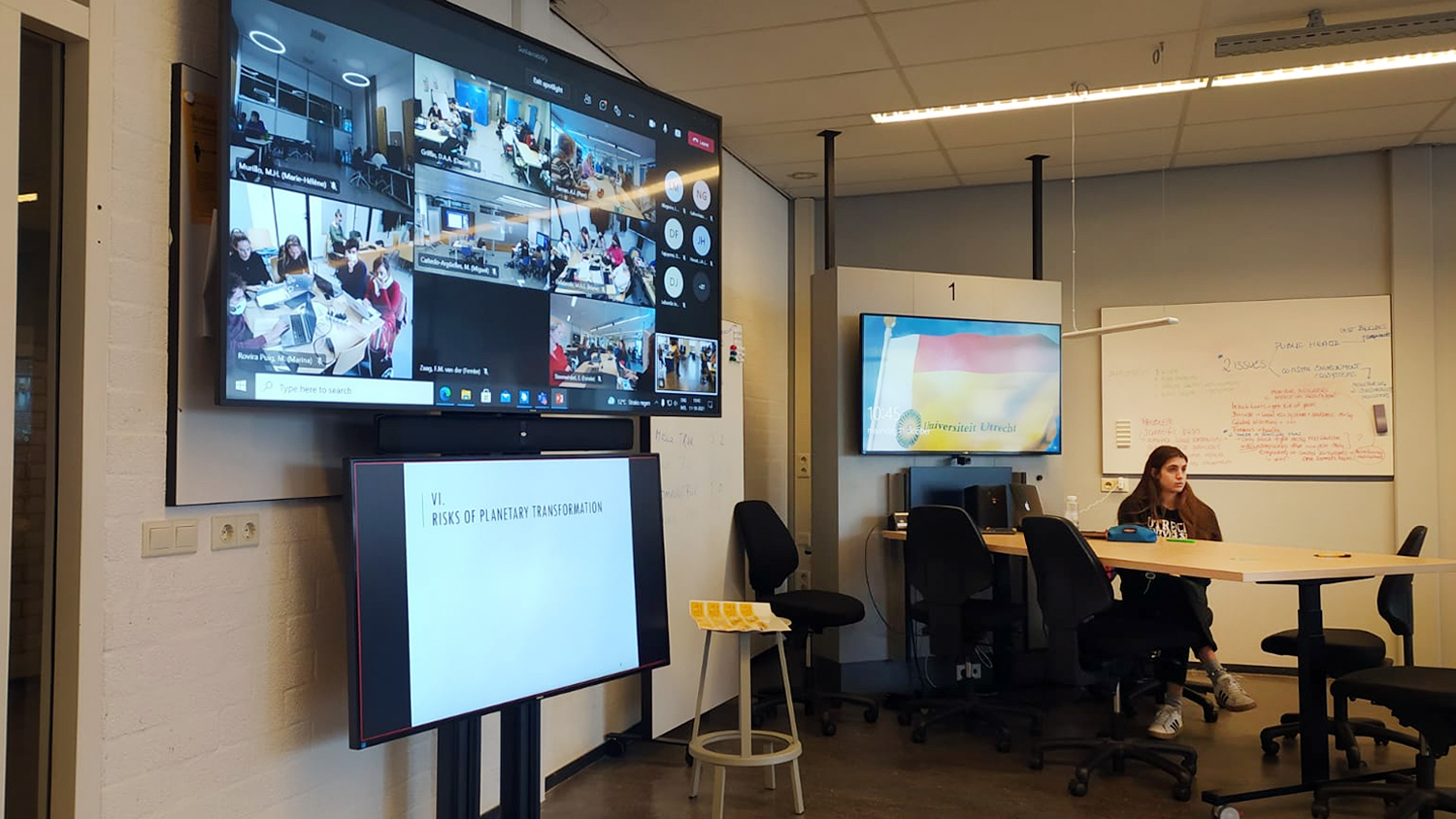 What is a university in 2021?
Charm-EU is transforming several traditional aspects that define a university. Usually, universities have strong connections to a regional identity: one wonders whether the students are going to form a bond with Europe the same way UU students form a bond with the city of Utrecht. By providing hybrid education, the participating institutions are basically asking to what extent the location of a university is relevant at all. Students currently move house to be close to their university, but why shouldn’t the university come to the students instead?

This Master's programme also proposes a new relationship between society and science. Classes are challenge-driven, meaning problem-oriented work for students. They are openly challenged to propose sustainable solutions to important societal issues, in collaboration with other social actors. This education model aims to form "new leaders for a better world". In Utrecht, the faculties of Humanities, Medicine and Geosciences teach classes for this Master's. Frank Biermann, professor of Global Sustainability Governance, says he sees his students as "agents of change": people who will work in core positions in sustainability. That is visible in his class, which has multiple references to the future professional careers of the students. This means that scientific knowledge is at the service of a more practice-oriented approach to education and social development.

The programme can therefore be seen as a unique project teaching students in an idealistic, ambitious, and innovative way. That doesn’t mean there aren’t any obstacles, however. Students might not be quite as mobile as the creators of the programme had envisioned, and perhaps Europe isn’t quite unified enough for the hope of setting up a truly European university. But the most central issue might be the question of what universities will look like in the future. Charm-EU is, in any case, an interesting proposal.

Acronym
Charm-EU is quite a mouthful, but it’s actually an acronym for everything the research and education institute tries to achieve: it stands for Challenge-driven, Accessible, Research-based, Mobile, European University. The inspiration for this new type of university came from French president Emmanuel Macron, who feels like Europe should combine its powers to provide higher education. The next step was a fund created by the European Commission in December 2017, for which the five Charm-EU universities successfully submitted a funding request.

Sustainable Development Goals (or SDGs), what are they? They’re 17 development goals that are meant to serve as guiding principles for efforts to improve the world before 2030, as established in 2015 by the United Nations. These include: ending poverty and hunger; promoting gender equality; fighting climate change; and making cities and communities sustainable. UU’s new strategic plan is also guided by the SDGs.
Tags: charm-eu | masteropleiding | hybride onderwijs | spanje | frankrijk | ierland | hongarije