Classes back on campus: ‘I pay more attention to teachers when I see them in real life’

Students were eagerly awaiting UU&#39;s doors to reopen, but now that they have been, many are not showing up for their lectures in person. As a result, many lecture halls remain unused. But the ones who do go to campus are happy to be back. "This is so much nicer than just seeing names on a screen".

The campus is slowly coming back to life. Hallways are once again full of students rushing to their lectures and workgroups. They linger around after classes or sit at one of the long tables in the Ruppert building to work on their laptops.

Students are relieved to be able to be educated on campus again. “Finally”, says Anne, a second-year Computer Science student. On Tuesday, she attended her first-ever lecture in person, as her programme “prohibited them last year without exception”. She much prefers in-person classes. “When you physically attend a lecture, you can engage much more with the lesson than you would have if it were an online class.”

However, only 30 to 40 students showed up to Anne’s lecture, even though there was room for 75. It is the lecturer who decides which students are allowed to attend in person. “He switches that up for each lecture”, she explains. 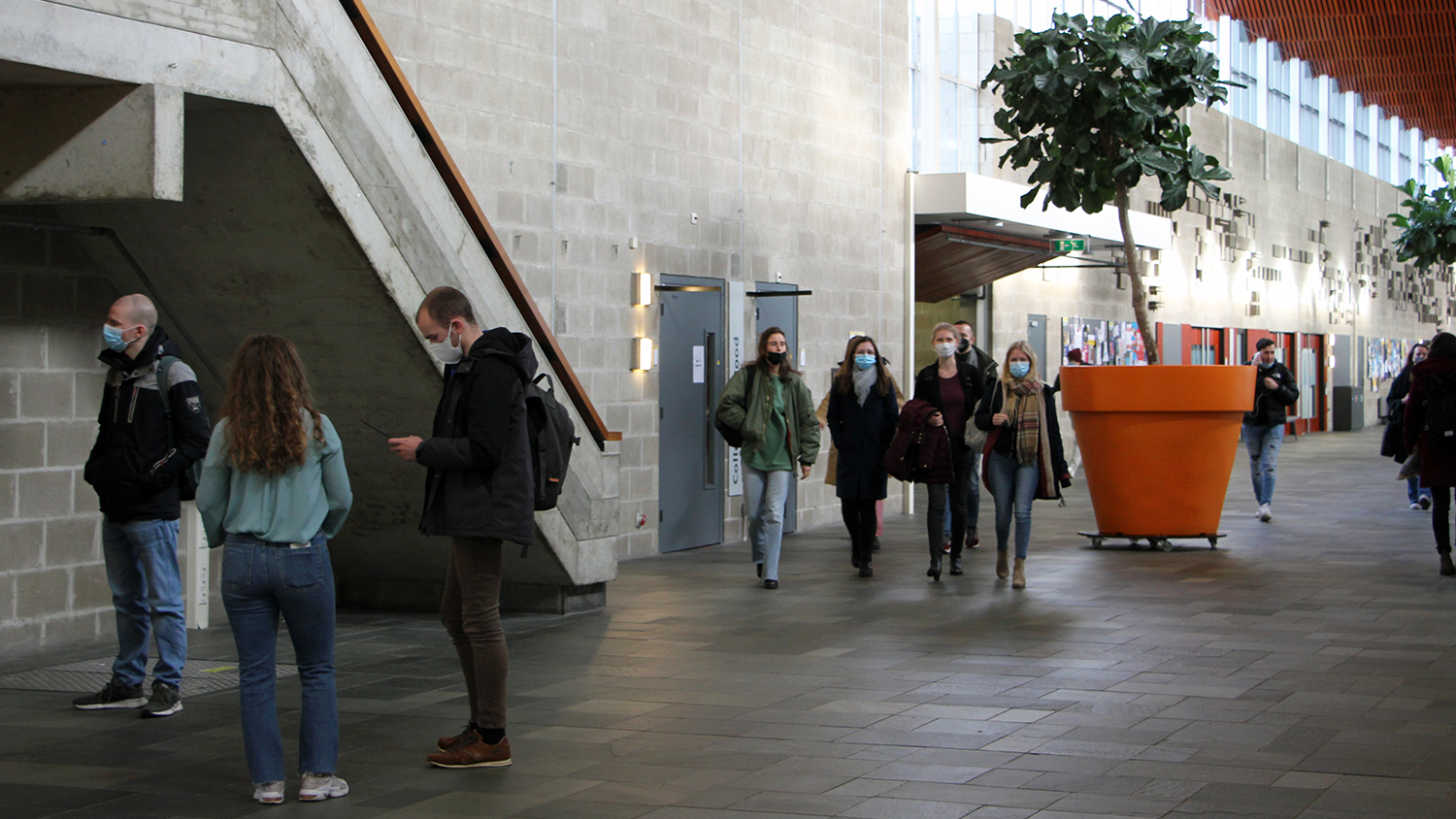 Meeting each other
Second-year Social Geography student Sam also gets “much more focused” in an in-person class than an online one. Unlike Anne, he can just show up at the lectures without having to register or schedule anything. But he has also noticed that many of his classmates haven’t shown up yet. He heard that “many students are stuck at home with Covid, or they have to quarantine because of their roommates".

Elise, a third-year student at University College Utrecht, and Berber, a second-year Psychology student, are just walking out of their workgroup. They were finally able to discuss the material with a small group of fellow students. “We can see who’s in our group and get to know them a little bit”, Berber says. “This is so much nicer than just seeing a name on your screen.”

Elise and Berber noticed big differences between their study programmes when it comes to the type of education they offer. Elise's programme has only 30 students, which allowed them to continue offering classes on campus more or less normally this academic year. But Berber, whose programme is much larger, has not been able to attend a lecture in person since joining UU. “Last semester, everything was online too. Before that, I was only able to attend a couple of workgroups in person.”

Low turnout
Although UU is officially offering classes on campus, there are not many of them being held in the Ruppert building or the Educatorium. The three lecture halls in the Koningsberger building remained empty for the entirety of Tuesday, February 8, afternoon.

On Monday morning, assistant professor Bas van der Schootbrugge gave a lecture in the largest lecture hall of the Educatorium, the Theatron. Some 30 first-year Maritime Sciences students have shown up, all wearing face masks. They were all ears, mesmerised by his lecture on Darwin. Van der Schootbrugge is glad to finally be able to transfer his enthusiasm to the students in person: “That is what makes it all worth it.” 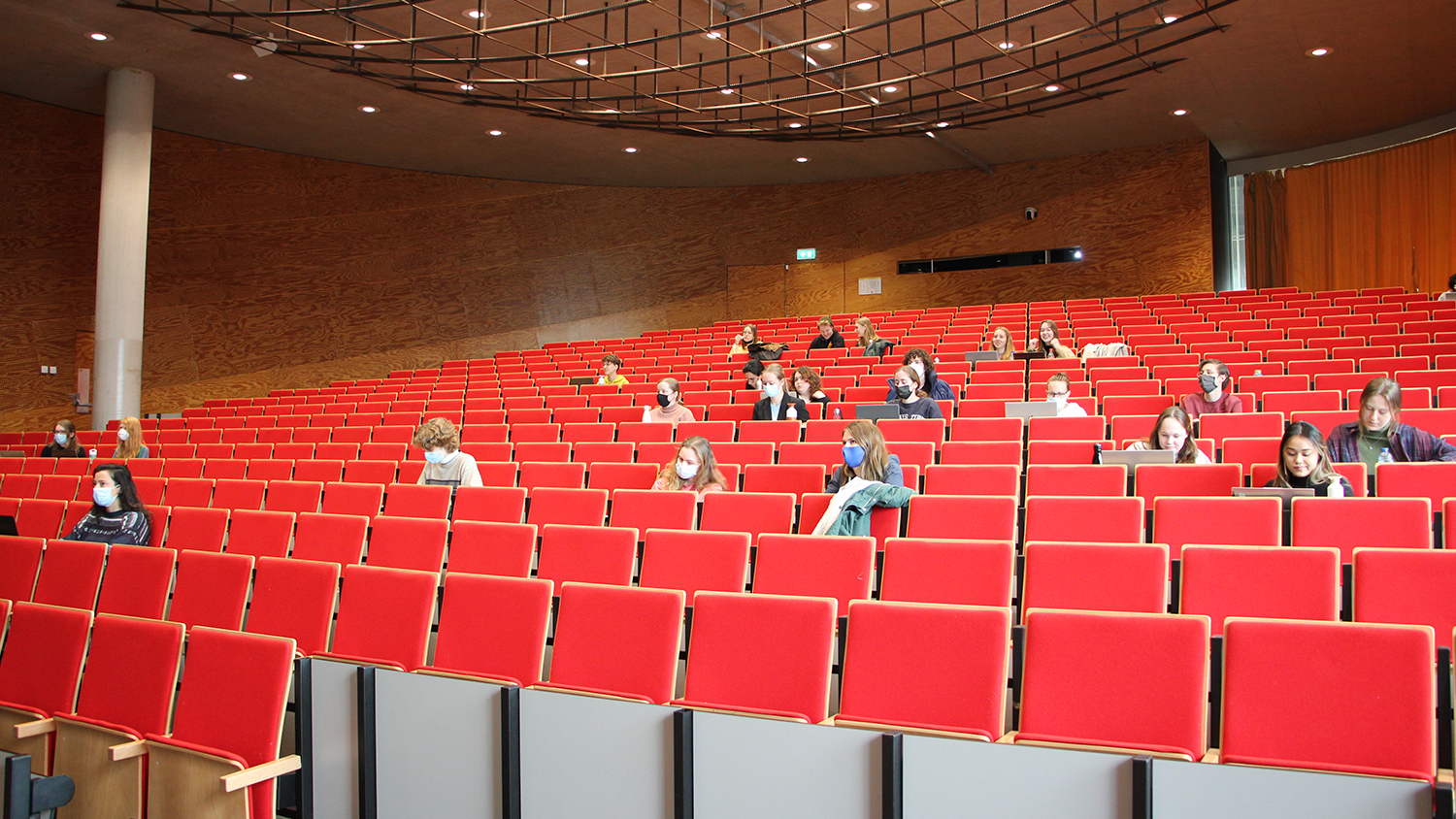 Not everything is back to normal, though. “We’re in a huge lecture hall right now and there is only a small amount of people”, Van der Schootbrugge says. There are about two hundred Maritime Sciences students, so the turnout is only a small part of the group. Most students watched the lecture from home. Van der Schootbrugge thinks this hybrid form of education works well. “Maybe too well, because it makes students stay home”, he sighs with dismay. “Now that in-person education is allowed again, I think students should come to campus and experience it.”

Allocation
Van der Schootbrugge worked hard to make schedules for his lectures on campus. “I’ve allocated the students into three groups so that each group can attend a lecture on campus at least once a week.” The fact that some students decide to stay at home anyhow is therefore to the detriment of those who wished they could have watched the lecture in person. Van der Schootbrugge wonders what the right approach should be. “Should I start using attendance lists? And what do I do if more than 75 students show up? Send them away?”

The low turnout at Van der Schootbrugge’s lessons is not an exception. Teachers of the Faculty of Geosciences have also noticed that part of the students is not coming to the classes. At the Faculty of Science, there is "no massive amount of no-shows", according to department head Pim Visscher. "But the high infection rate in the Netherlands means many students cannot show up to lectures, workgroups and practical sessions".

Absenteeism
The same goes for the Faculty of Social Sciences, reports vice-dean Leoniek Wijngaards-de Meij. "For some gatherings, there are lots of students on location. But, for other gatherings, part of the students call in sick or say they must quarantine".

Scheduling conflicts also play a significant part in the issue. If an online class is scheduled immediately before a class in person, the student has no time to get to the campus. The other way around is also inconvenient: "my in-person class went until 1:00 pm, and my next class, which was online, started right after that", a no-shower tells DUB. 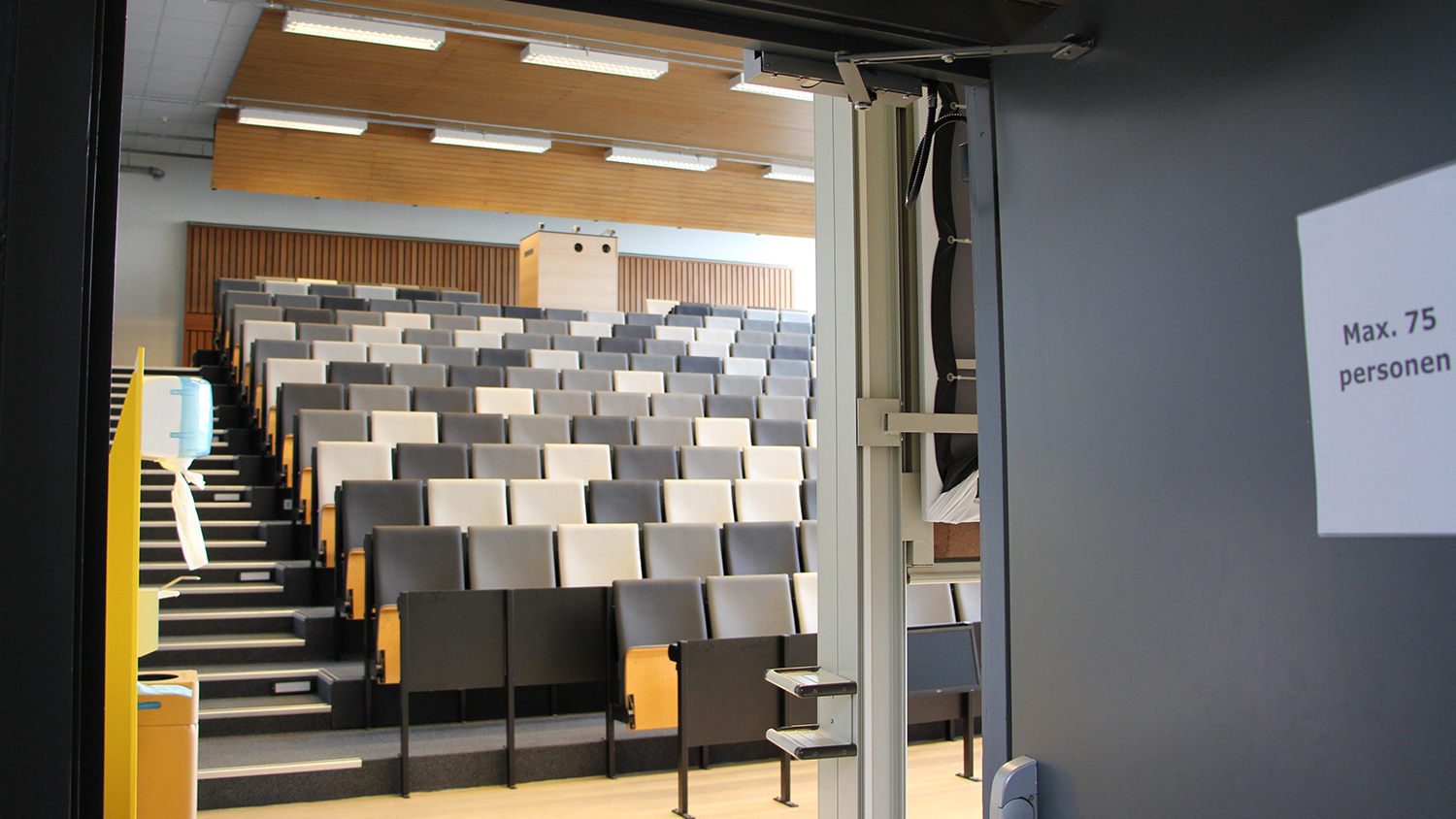 The White Hall in the Ruppert building, which was empty on Tuesday, February 8

The largest lecture halls are barely being used, as they're intended for lectures for more than 75 students at a time, says Renée Filius, UU's Head of Education. "Those lectures are being offered either online or students are being divided into groups, who are taught in smaller halls", she explains. "We didn't know classes for more than 75 people would have to take place online when we made the schedule". Changing the schedule was simply "not feasible" anymore, as they wouldn't have enough time for that. "Now we're hoping that classes for big groups can be offered on campus soon. Then, those spaces will be full again".

This week, UU started offering in-person education again, although it still needs to work with a limit of 75 students per lecture hall. Exams are exempted from this rule, as long as students can keep a distance of 1.5 meters from each other. They are also required to wear facemasks when moving around inside the university's buildings but they can take them off once they sit down, as long as they keep a distance from other people. The university also advises them to use a self-test twice a week.
Tags: academic education