The university is planning to close eight reception desks in its buildings. Not everyone is comfortable with that idea, however, as the consequences for students and employees who make use of those buildings aren’t clear yet. Receptionists and other staff members who can be contacted in case of outages and complaints are also worried about what this decision would mean for them.

The Facility Services Centre is planning to get rid of reception desks in five UU buildings in the city centre and three at the Utrecht Science Park. The receptions in question are located at Drift 4 to 6, Muntstraat 2, Trans 10, Janskerkhof 15a, Nieuw Gildestein, the University Library at the Utrecht Science Park, and the Sjoerd Groenman building.

This means that the Facilities Service Centre – which refused to confirm the locations to DUB – will do away with eight of its twenty-two reception desks. A new reception might be added at the International Campus located at the former Kromhout grounds. In that case, UU will have a total of fifteen manned reception desks.

Some members of the University Council also have questions about the plan. In the most recent meeting with the Executive Board, the council asked how the decision to close the reception desks can be reconciled with the board’s promise to provide a safer environment.

At the same time, the council of the university’s Corporate Office, of which FSC is a part, expressed its discontent with the lack of information provided about the consequences such a decision will have for the employees concerned.

Although no jobs are at risk, the receptionists are worried, according to the Corporate Office council. They’ll lose their fixed spot, as well as the daily contact with the students and employees in ‘their’ building, not to mention some of them will be assigned different tasks.

Safer environment
FSC director Eddie Verzendaal thinks it's a pity that there's so much unrest about these plans, considering the idea to close the reception desks had already been discussed with Corporate Office employees in 2019. “We had to put the plans on hold for a while because of the coronavirus crisis. Apparently, people felt blindsided when we picked the plan up again this spring.”

Verzendaal explains that getting rid of the reception desks is part of a broader plan to create a safer environment in the university’s buildings, as well as improving the service provided to students and employees. One of the propositions of the plan is to switch to the so-called "object surveillance": people who walk around in the buildings rather than receptionists sitting behind a desk.

According to Verzendaal, the Faculty of Science has already implemented this change in the Buys Ballot building and the first experiences are positive. The FSC also wants to concentrate the tasks of the university’s points of contact (the staff members to which others can turn in case of outages, complaints, and requests for help such as IT support) in four zones. The work will then be coordinated from the reception desks in the Educatorium, Androclus building, Janskerkhof 2/3, and the David de Wied building. That way, those employees will be able to respond more quickly to questions and requests received by phone, online, or in person.

“We’re convinced that this plan will make for a safer environment as well as increased hospitality in the buildings,” Eddie Verzendaal says.

Consequences for staff
This decision will have consequences for the nineteen receptionists who have permanent contracts with the university. Conversations are being scheduled with them at the moment.

There's also a possibility that they’ll be offered a different, "suitable" position. Six receptionists have applied for a development track so that they can also carry out point-of-contact tasks. 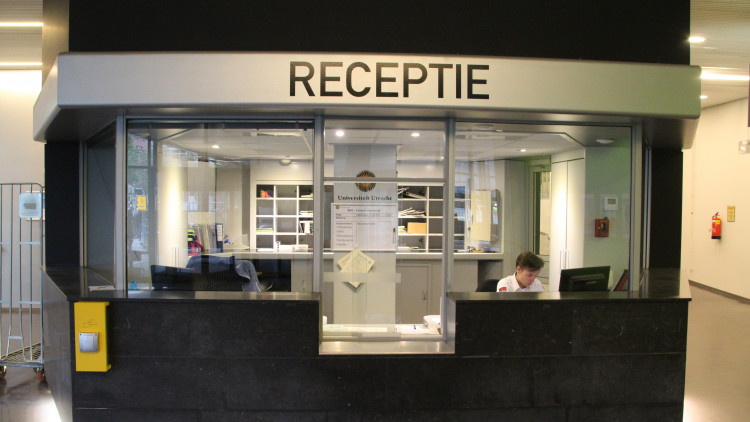 Not entirely happy
The faculty boards of Humanities and Social Sciences told DUB that they haven’t yet defined their position with regards to the closing of the reception desks in their buildings. For now, these plans still require a lot of discussion. They understand why their faculty councils are asking for further explanation, but they’re unable to give it right now.

Both boards say they don’t have any fundamental objections to the different type of security work suggested by the FSC. But they do ask for more attention to be paid to the "hospitality function" of the receptionists. They also called for guarantees for feasible alternatives for the logistic tasks receptionists currently perform.

Director of Social Sciences Frank Jan van Dijk: “The receptionists have a central, greatly appreciated role in the faculty. If the reception desks close, then we’ll need good solutions. There are still plenty of questions about this matter, especially concerning the security aspect.”

Miranda Jansen, director of Humanities, is “not entirely happy” with FSC's plans. She fears the buildings’ “open character” will be lost. She too points out the importance of the logistic functions, like distributing keys and packages, that reception desks are responsible for. “Speaking from experience, I know that the reception desks at the city centre fulfil more of these tasks than the ones in De Uithof.”

Jansen states that she’s urged the FSC to create an additional reception for employees at her faculty. Although there are multiple service points in the city centre that the Humanities staff could use, only one of them is located in one of her faculty's buildings. “Currently, there’s only a service point in the University Library.”

Remarkably, Verzendaal is not familiar with that last request. He claims there will be intensive conversations with the faculties about their needs. He does not want to respond to questions about possible measures that need to be taken if and when reception desks disappear, such as the use of electronic access cards or more CCTV. According to him, the solutions to these issues will be found for each building separately. “It’s not as though all reception desks will close at once. For some, it will take longer than for others. If necessary, we’ll take more time.”

The director has since been invited to provide further explanation in the faculty councils.

Annoyance about lack of information
Late last month, he also gave further explanation about the plans to close the reception desks in a meeting of the Corporate Office council. Many were annoyed at how the adjustments to the reception desks and the points of contact seemed to have been rushed.

According to chairman Bobby Baidjnath Misier, the FSC failed in its communication to the concerned staff and to the Corporate Office council. “We had no phased plan, no timeline, no info on FTEs, nothing. We had to hear from concerned receptionists and point-of-contact staff about what was going on.”

The annoyance within the Corporate Office council was so big because the members also had to hear from the concerned staff that yet another organisational change has been scheduled. The FSC has decided to conduct tenders for ambulatory surveillance. Most of the 24/7 security in the university’s buildings is already in the hands of an external company, but there are still four ambulatory surveillance employees who have permanent contracts with UU.

They were offered the choice between switching to the UU’s new contract partner or remain at UU as object surveillance employee. The four employees preferred the latter, but will see their income reduced by a lot because bonuses for irregular working hours will be scrapped.

Apologies offered
In the meeting, most issues in the relationship with the council were smoothed over. FSC director Verzendaal offered his apologies. He tried to follow a careful plan by first informing the employees involved, but it backfired.

In coordination with HR, the FSC determined that these plans can be categorised as "small organisational changes". The Corporate Office council doesn’t have to be informed officially about small organisational changes, but Verzendaal should have tried harder anyway. “I feel very bad about this. It doesn’t benefit me at all to try to bypass the council – on the contrary.”

Verzendaal could relieve most of the council members’ worries. He assured them that he’s looking out for the "vulnerable" position of the employees involved and he promised to improve the communication with them. For example, when creating the new schedules, he’ll listen carefully to the employees who don’t wish to be scheduled in certain shifts.

Verzendaal also guaranteed to the Corporate Office council that the short-term plan is not to outsource the jobs of UU receptionists. Some of them think the decision to close some of the reception desks is a prelude to that. An understandable fear, considering the experiences of the canteen staff who, after a new tender, switched to a different organisation and subsequently lost their jobs. Verzendaal: “My answer is clear. Do I have any plans for outsourcing? No.”

Verzendaal also told the Corporate Office council that the ambulatory surveillance staff who will miss out on their irregular working hours bonuses will receive a financial offer for a transitional arrangement that goes beyond what the collective labour agreement stipulates.

After the meeting, the chair of the Corporate Office, Bobby Baidjnath Misier, expressed his satisfaction. “We’re happy that we’re being listened to, and that things are taken care of.”

Are we reorganising or not?
Last month, FSC's plans were discussed in the Local Meeting, in which unions and the university discuss organisational developments. The Corporate Office council expressed their surprise at the fact that the unions had not previously been informed.

According to the spokesperson of the unions, Paul ter Veld, the topic was already on the Local Meeting’s agenda, although he too felt like that happened a bit too late. He says the unions asked some additional questions in last week’s meeting, the answer to which is expected later this month. He has no further comment on the content.

Inclusivity only for the highly-educated
Last week, the University Council discussed the closing of the reception desks in an informal meeting with the Executive Board. President of the council’s staff members Wim de Smidt says the council realises the co-determination responsibility about the plans lie with the Corporate Office council o'r the Local Meeting, but he does wonder whether the disappearance of "the friendly face at the door" contributes to a safer environment, and if so, how. The council received further explanation last week, De Smidt says. “But that hasn’t alleviated our concerns.”

De Smidt would also like to have a discussion with the Executive Board about "what type of organisation we really want to be". He refers to the experiences with the catering tender and to the new plan to outsource the ambulatory surveillance. This topic, too, was discussed last week. De Smidt says the Executive Board didn’t acknowledge the necessity of a discussion about this, but did agree to have another conversation about it.

That’s no luxury, De Smidt argues: “We’re constantly talking about inclusion at the university. But all too often, it seems as though we’re really only thinking about our highly-educated colleagues"