Anouk Keizer (34) is an Experimental Psychologist at Utrecht University. Since the start of the Coronavirus pandemic, she’s researching the effects of social distancing on people’s mental and physical wellbeing. Keizer aims to instigate public debate about ‘positive touching’.

Anouk, your research is about the effects of social distancing on people’s wellbeing. What can you tell us about this. Do you have any results to report yet?
“We want to identify in which ways people are missing touch: both being touched and touching another person. The Dutch media calls this phenomenon huidhonger, which means ‘skin hunger’. But is it really what’s happening? That’s what we’re trying to find out. Shortly after the start of the pandemic, we developed a lengthy online questionnaire, with questions such as ‘who do you live with?’, ‘do you have pets?’, and ‘what’s your connection to the people you live with?’. But it also features questions like ‘how often do you experience anxiety?’ In the end, 4,500 people participated in the study. That’s a very high number for social science studies, which goes to show just how relevant the topic is. We finished the data collection phase recently, and I hope to be able to share our conclusions by the end of the year.

“Our expectation is that people are indeed missing touch, but I’m curious about who’s missing it the most. Single people, or perhaps the elderly, would be one’s first guess, but maybe it’s the parents with young children, or people living with housemates…”

What effects does touch have on people?
“When we look at the function of touch, we see a very special thing. Social touch – touch between people – is processed in a completely different area than other forms of touch, for instance when a little bug walks across your arm. Social touch is processed in an area of our brains that is directly involved with self-reflection, self-awareness, emotions, and how we feel. That in itself indicates that, at some point during evolution, touch between people was so important that our bodies and brains developed a special system to process that touch. I think that demonstrates that touching and being touched is a basic need.

“Studies show that touch can have very positive effects, such as relieving pain when people are given a painful stimulus. Research has shown this with people who had to keep their hand in a bucket full of ice water as long as possible. The stimulus felt much less painful for those who were holding their partner’s hand with the other hand, not to mention they could hold out longer.

“We’re also seeing that touch can relieve stress. If someone strokes your arm after a ‘stressful task’ such as being excluded from something, you really do feel less excluded, and your cortisol levels (the stress hormone) are lower. Lastly, touch ensures a better mental and physical wellbeing.”

What happens when people miss touch?
“Honestly, there aren’t many examples of research on missing touch. That’s because it’s not really ethical to deny people touch for a long time. We do know that people who have a small social network -- and are therefore touched less often -- also have a generally worse social and physical wellbeing. But these are often people who have psychiatric conditions. This summer, I joined a fellow psychologist and a filmmaker to create three video portraits about how psychiatric patients in lockdown are missing touch.

“But the unique thing about the current situation is that everyone’s in the same boat, regardless of whether they’re sick or healthy, introverted or extroverted, or whether their social network is small or large. Everyone’s missing at least some of the touch they would usually get.

“I suspect, of course, that missing touch has negative effects, but we’re not going to die from ‘skin hunger’. Whatever the case may be, for some people, life is a lot less fun without physical contact. We’ll just have to see how long we can last like this.”

Can the effects of touch be replaced with medication?
“No, I think that’s very tricky. It would be nice if that were possible, but I’m pessimistic about it. Oxytocin, also known as ‘the cuddle hormone’, which is released when you experience touch, could be replaced with oxytocin nasal spray, for example, but that only has short-term effects. Moreover, hormones always interact with each other.

“In stressful situations, touch lowers our cortisol levels. We’re missing that effect now, and it can’t be replaced by medication, which is inconvenient in a pandemic, when most people experience more stress than usual.”

What about young people? What kind of long-term effects will the absence of touch have for them?
“In their student years, people are building their future in numerous ways. Apart from getting an education and looking for work, they’re also finding friends and a partner, and forming social relationships that may last a lifetime. That isn’t possible now. I think we won’t be able to measure any instantaneous effects, but definitely in ten or twenty years, when the young people of today reflect on these times, they will get the feeling that they stood still. A couple might, for instance, choose not to move in together yet, even if they’d been planning on doing so. Or they might postpone a pregnancy, because things are so uncertain. Right now, there’s also psychological research being done on what the pandemic does to young people’s ideas of the future.”

Do you think the government is too nonchalant about social distancing? If touch has so many positive effects, is it desirable to keep distance from each other?
“It’s difficult to make a statement on this. I think everyone who makes the policies does so with the best intentions -- after all, it affects them too. The increase in infections these past few months shows that people are finding it very difficult to keep distance from each other, they have a hard time following the rules. I don’t know if we should adjust policies based on how hard things are, but apparently, we do feel the need to be close to each other. Closer than 1.5 metres. Social distancing is rather inhumane, really. But I don’t think there are any good alternatives, unless you want everyone to get sick.”

How are the waiting lists for psychologists now?
“During the first lockdown, there were more admissions to psychiatric wards and more people seeking treatment for new symptoms, especially depression and anxiety. For many of those patients, the pandemic was the last straw that made them unable to deal with their issues. This situation has made it even harder to fix the pre-existent problem of waiting lists.”

Are diagnostic protocols being adjusted now that more people are feeling lonely because they have very little social contact?
“I don’t know how that works in practice, because I’m not working as a psychologist right now, I’m only working as a researcher. Usually, we would consult the DSM, a handbook that lists all the disorders. There’s a list of symptoms we have to check. Psychologists mainly look at how people experience their suffering and whether their ability to function is limited because of their symptoms. I’m sure patients will be asked about the lack of social interaction, but they will also be asked whether they are interested in social relations.”

In our society, we don’t talk much about the need to touch, or about missing it. Why is that?
“That’s something I’m fighting against, because I feel that talking about touch is sort of taboo, especially in psychologists’ offices. Thanks to the #MeToo movement, a lot has been said about bad touch, which is good, but people still rarely talk about missing touch. It’s easier to say ‘I miss sex’ than to say ‘I need a hug’.

“I guess people find it difficult because it makes them vulnerable. By saying that you miss touch, you show that you’ve got this need that people around you can’t meet. The taboo exists even though everybody knows how important touching is. Look at new-born babies: the only way to get a message across is by touch. We also think it’s perfectly normal for toddlers to crawl into their parents’ beds at night. Finally, many elderly people feel the need to just lie next to someone, not necessarily a sexual thing. Social distancing is inhumane, really.

“Society is paying more attention to ‘skin hunger’ or ‘skin starvation’ now, because of the pandemic. Lieza Röben made a beautiful documentary (in Dutch) about a woman who’s severely ill and isn’t allowed to touch anyone because she would most probably die if she got Corona. I truly hope that we will keep talking about touch after we get out of this situation.” 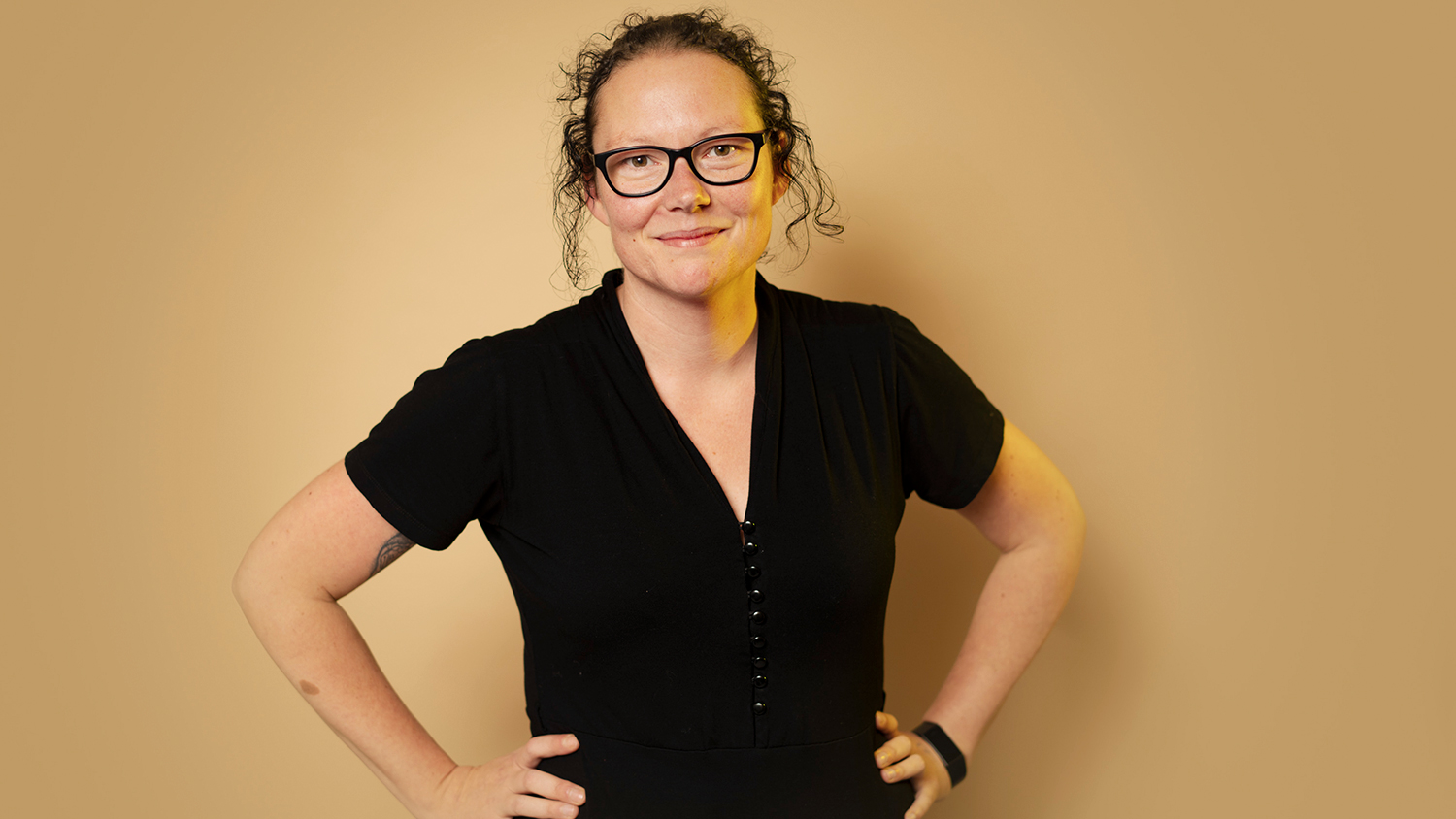 Anouk Keizer (34)…
- Researcher at Utrecht University, Faculty of Social Sciences. Part of the research group Experimental Psychology.
- Assistant professor of Psychology
- Obtained her PhD at Utrecht University in 2014 with a thesis about how patients with anorexia nervosa experience their bodies
- Severely dislikes online teaching. She even misses the students sleeping during class.
- Uses a Hema make-up brush to stroke people’s arm in her research
- Thinks that touch could also have positive effects in health care, and would like to see more research being done about that
- Doesn’t miss touch as she has two small children in her home.