How good or bad are the Dutch at following the rules to fight the pandemic? That&#39;s what John De Wit, UU Professor of Interdisciplinary Social Sciences in Public Health, delves into. But that&#39;s not all: he also advises the National Institute for Public Health and Safety (RIVM in the Dutch acronym) on human behaviour.

You study how people deal with the corona regulations. Do you always follow every single corona rule?
“I try my best, but I can’t say I’m perfect. I’m only human. My partner sometimes chastises me and tells me I should keep more distance when I’m walking past someone. It’s still complicated to constantly pay attention to what you’re doing. There are so many habits you need to break.”

Which rule is hardest for you to follow?
“Sometimes, it’s simply not possible to avoid crowded areas in the streets or stores, and it can be tricky to keep your distance from others. That’s unfortunate. In those situations, I wear a face mask.”

You’re a member of the RIVM’s Scientific Advisory Council, Corona Behavioural Unit. What does this council do?
“There are several professors in this advisory council, and we think about all sorts of questions. As a member, I do realise I should lead by example. So I don’t want to ‘pull a Grapperhaus’ [Minister of Justice and Security, who disregarded the corona rules at his own wedding this summer, ed.]”

Everyone’s expected to follow the rules. Why are people having such a hard time doing so?
“Because the measures conflict with several needs people have regarding health, sex, and intimacy, and social and physical contact. Alongside other behavioural scientists, I’ve studied those needs during the coronavirus pandemic. How important are they? It turns out that, before corona, social contact and intimacy were very important to people, and health a lot less so. The first lockdown caused a priority shift: suddenly, health was more important, and the others less so. By the time the lockdown came to an end, those social aspects became important again, but health remained important, too. Behaviour is a mirror image of what’s important to people. When you feel that your health is being threatened, you’re more likely to adjust your behaviour, as compared to when that threat subsides.”

Why do some people follow the corona rules and others don’t?
“That’s a very good question. People differ in the extent to which they’re able to associate themselves with something. Some see risks everywhere, while others think things aren’t that bad. Some think it’s important to participate, while others think their actions won’t make much of a difference.

“It’s those differences that make the choices the government makes concerning communication so crucial. They have to make sure that even the people who do not think it's important to follow the rules, stay alert. It usually helps to show them that they can be affected by the pandemic, too, for instance if their loved ones get sick.

“At the moment, however, the government's message mainly focuses on emotion, with the goal of making people feel that their behaviour matters. If one person were to sit at a restaurant terrace, that wouldn’t matter much, but it does matter when everyone’s doing it.”

What do you think of people who don’t follow the rules?
“I think that’s very understandable. With my background as a psychologist, I completely understand that people who aren’t necessarily at risk and don’t feel threatened by the virus as much, still try to find possibilities for having fun in life. That’s a self-evident process -- and not something you can blame people for.

“When it comes to these measures, it’s a constant challenge to juggle between several things that are mean a lot to people. Finally, most people find it very complicated to police their own behaviour. So, when more things are allowed, such as last summer, they let go completely. That’s not sensible, but it is very human.”

Do you think the rules should be enforced more?
“I think a little more direction is needed. Currently, people tend to decide for themselves which rules to follow and which rules to ignore. Some people think 'If others stick to the rules, then maybe I don’t have to.' That’s what I’ve been worrying about all year: that we’re leaving it up to the people to make decisions that ultimately affect all others. The government says ‘Stay home as much as possible’, but who actually stays home? The advice is to avoid crowded places, but how are people to decide when it’s too crowded?

“My concern is that the people who aren't worried about corona go out and shop for fun, while the people who are more careful or more vulnerable stay home or only go out for necessary groceries. Going into public places has become a rare thing, and that means we need a system to divide that fairly amongst ourselves. That doesn’t exist right now, and I’m worried that the most vulnerable members of society don’t get their share because others are taking all they can for themselves.”

What should happen, then?
“Agreements should be clear, and people should be talked to about their behaviour. We don’t like that, but it’s necessary to achieve that fair division. Dutch people tend to push the boundaries a bit, that’s a cultural thing.”

“Next to the Spar in De Uithof, there’s an enormous screen that broadcasts personal videos with messages such as 'My son has asthma. I’m not letting him play outside with other children, and I’m afraid I’ll infect him by going to the office. Keep your distance, for me.'"

I read on the UU’s intranet that this is a social experiment…
“True. I’m one of the researchers behind the project and I also appear in the video. I said something about elderly people and being vulnerable to corona. We came up with this experiment because we were concerned about people not following the rules at Utrecht Science Park. The university wants to make people aware they’re not just following the rules for themselves, but also for others.”

Don’t people know this by now?
“Knowing things and acting accordingly aren’t always the same thing. In fact, that’s what this experiment is about: the university wants to make people aware of their behaviour. We want to examine the extend to which this type of message has a positive influence on people's behaviour.  But it’s hard to study its effects because there aren’t many people in De Uithof right now.”

Personally, I was disappointed by it. When I cycled past it, I wondered: ‘Why do we need a screen outdoors – where fewer infections happen – in an area where barely any students pass by anyway? Do even the outdoors have to be ruled by corona?
“You thought it was intrusive.”

Intrusive is the right word. I wondered why the university thought it was necessary to remind me of the rules on my way to the one single class I have. Instead of getting me to think 'I'll be good and keep my distance', it was discouraging. It’s kind of reinforcing a culture of fear.
“What you experienced isn’t an unknown phenomenon. It’s called selective attention. We all tend to close ourselves off to negative things. Sometimes, a certain method of communication, such as a screen, can bypass that selective attention in an intrusive way.

“We all know the rules, but we don’t necessarily act accordingly. Irritation, like you experienced, doesn’t have to stand in the way of effect. Take laundry detergent commercials, for example. They’re notoriously annoying, but they do sell.” 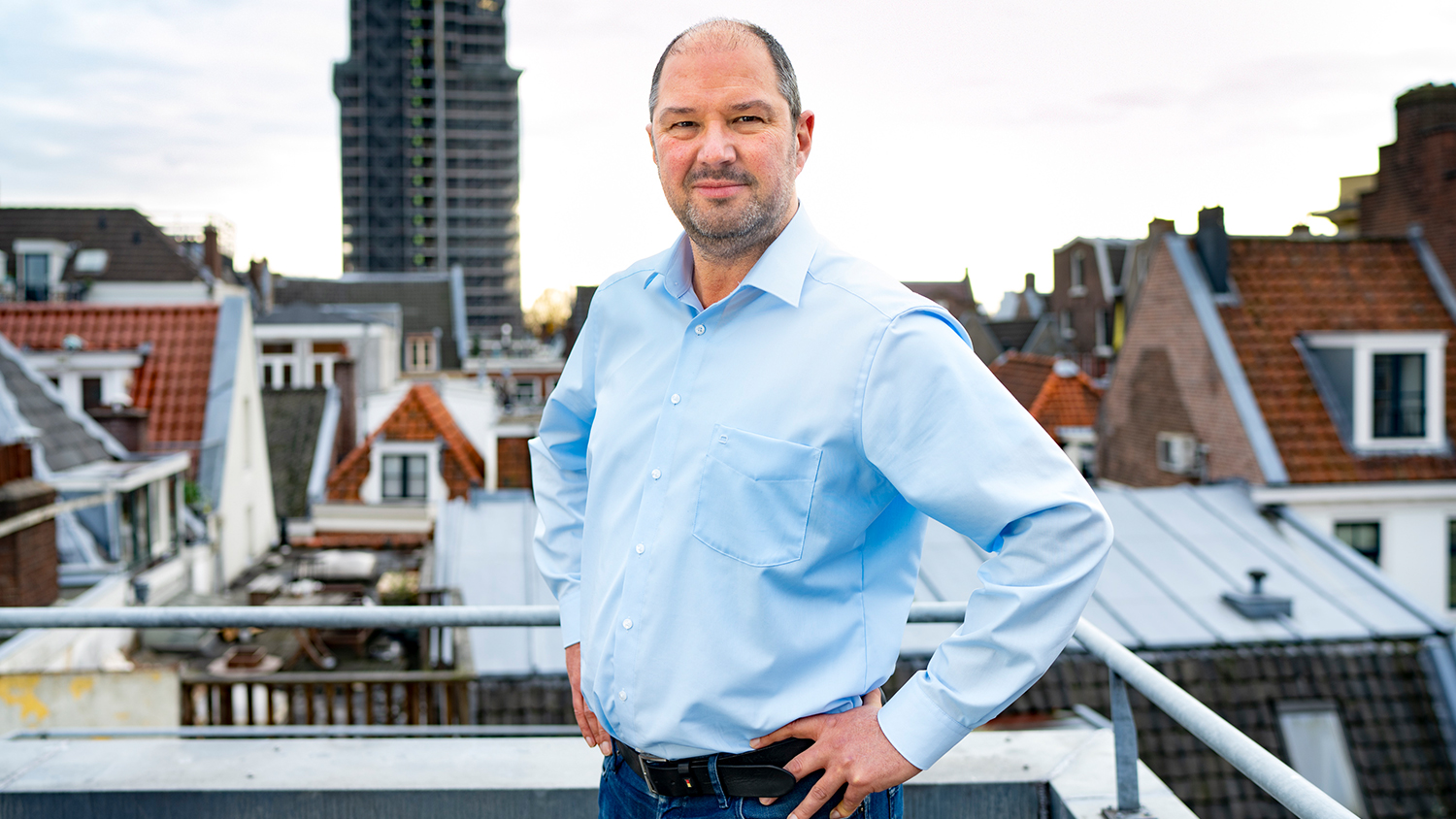 Newspaper NRC published a comprehensive interview with Rudi Westendorp, Professor of Geriatrics, on November 7 (in Dutch). Westendorp stated that the proportionality of the corona regulations is off. He also mentions the winter of 2017-2018, when nearly 10,000 people died of the flu. No one changed their behaviour because of that. So far, 8,616 people have died of corona, with an average age of 80 among men, and 83 among women. Why should we change our behaviour now?
“It’s a complicated debate. As an individual, you can want a long list of things: health, sex, social contact... So, you try to find a balance between those needs. But it's also about finding balance in the things we want as a society, such as protecting public health, the economy, and people’s wellbeing. I think the Netherlands has done a good job finding that balance. We’re not doing too poorly, and the measures we've adopted are less invasive than in other countries.

“All in all, in a democracy, it’s about what we all want to achieve together. Having multiple voices matters. It’s good to remain critical, but it’s also good to look at the bigger picture. To me, the most important balance to find is providing health care for corona patients while still offering good health care for the rest of the patients.

“As for fatalities among age groups: what if the victim was your grandmother or grandfather? Think about it. If you only look at the abstract figures, then you can reason that way, but for most people this is a very, very concrete situation. Those are people we know, personally. It’s hard to imagine a society where we don't take any measures just because the people who are dying are aged 70 and older. But these are important questions to ask. Again, it’s about keeping things in balance, so, in that sense, I think Westendorp's article is a significant contribution to the debate. After all, we need more than just short-term thinking."

-          Is professor of Social Sciences at Utrecht University, with a focus on public health
-          Is a member of the temporary Scientific Advisory Council Corona Behavioural Unit
-          Does research on the effect the corona rules have on behaviour
-          Also studies how the corona pandemic influences having sex, especially among men
-          Obtained his PhD in 1994 with a dissertation about the prevention of HIV infections among gay men
-          Studied psychology in Nijmegen
-          Lives in the Utrecht city centre and is baffled by the crowds there