The neighbourhood of West-Lombok. Photo: DUB

For a number of students from Utrecht, Eindhoven, and Wageningen, their studies in the past few weeks focused mostly on Covid. They took the course Covid Challenge, for which the students were to come up with solutions for societal issues that have come to light due to Covid. DUB followed one workgroup, which concluded that more public green spaces are needed.

A course called Covid Challenge is being offered by the alliance comprising Utrecht University, UMC Utrecht, the Eindhoven University of Technology, and Wageningen University. Students from all four institutions can take part in it. In mixed groups, they are tasked with finding an answer to a question posed the municipality of Utrecht: ‘How can we create space for civilian activities in the Netherlands, while taking Covid regulations into account?’.

The students were guided throughout the course by teachers from the four institutions. They also spoke with experts from outside the universities. DUB followed one of this work groups, comprising Wendy, Nicolien, Joe, and Sjors from the UU; Ayda from Eindhoven; and Tuul from Wageningen. A clear majority hailed from Utrecht, but then again, most people who registered for the course were from UU.

The words ‘create space’ were taken literally by our group. Assisted by an online whiteboard and the corresponding online post-its, the students concluded there’s a lack of green spaces in the municipality. Not only would such spaces enable people to meet each other with enough distance, but they would also increase people's freedom and quality of life after the pandemic. “Every brainstorm session came back to this,” explains Joe, as the others nod in agreement.

That wasn't the only point of convergence, though. They also saw eye to eye when it comes to the methods of collaboration and the way they were to approach the research. From the beginning, they were all considerate of each other and of how much time each of the members had for the project. The process went very smoothly, according to Ayda. “This is different from other projects. The focus is more on bonding and personal get-togethers, and not so much on grades.”

The students spent most of the time defining the issue: what are the problems Covid causes and how can the municipality help relieve them? They spent four of the seven weeks on this part. The hardest part, according to Wendy, is that the brainstorming sessions enabled the students to find tons of small details that ended up distracting them from the heart of the matter. Once you can explain the problem well, then you know you’ve already learnt a lot, she reasons.

Phase 2: Finding and pitching a solution

Finding a solution for the lack of green spaces in Utrecht wasn’t easy. The students analysed several neighbourhoods and concluded that West-Lombok could use a space with nature where people could meet up. The next step was sending out a survey to the residents of the area. The results showed that, when they meet people in the neighbourhood, they mostly do so in indoor spaces, which means there's a higher chance of infecting each other even when the weather's nice. As a general rule, the residents said they would welcome a green are in the neighbourhood. The students then spoke with employees at the district office about their ideas, emphasising that these spaces would increase the residents’ quality of life even post-Covid.

During the plan's development phase, the students had the assistance of a team of scientists and coaches, who helped them to take the next steps. In the end, they came up with a toolbox similar to a selection menu, containing suggestions for improvements. The suggestions have levels for each topic. For the topic ‘existing green spaces’, for example, level 1 suggests no longer mowing the grass, cleaning more, and planting flowers. Level four includes, among other things, the placement of more public bathrooms. 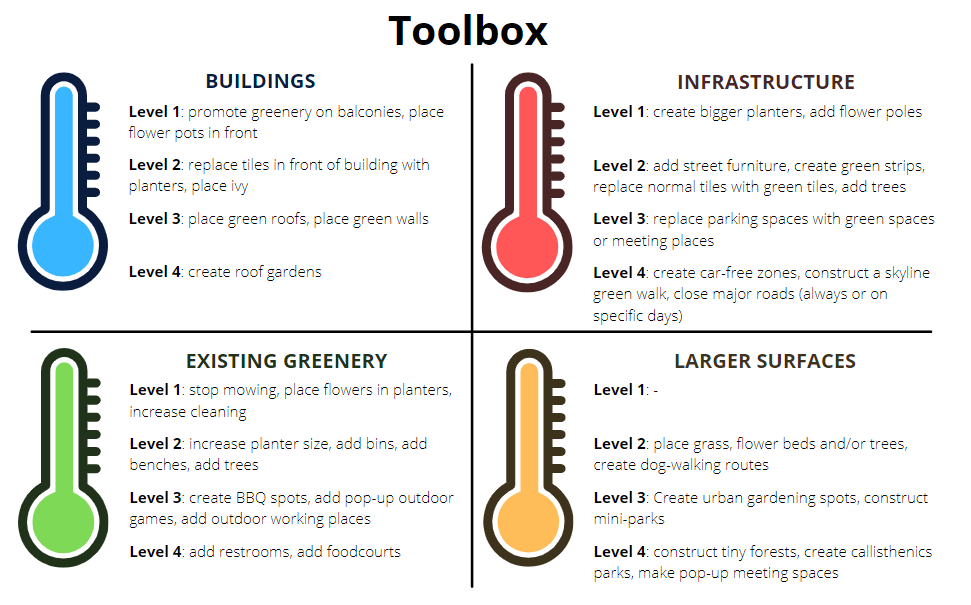 Our team’s idea wasn’t the best one of the course, according to the jury. That honour was awarded to a group who created a campaign to encourage people to open their windows, with a catchy slogan: “Open een raam, zo gedaan!” (Open a window, easy to do!”, ed.). They got to pitch their idea to the municipality that same day.

Supervision of the project

Although it may seem as though our team had reached the finish line without any issues, that wasn’t the case. A previous idea met with logistical issues, which meant they had to search for a new one, which became the toolbox. The students say their refusal to give up was in large part thanks to the excellent guidance they received. Throughout the entire project, a teacher served as their coach and met with them both individually and as a group. The coach was also present in the background at times during meetings. Wendy was definitely surprised about the coaching sessions. “I thought: woah, people are taking the time for me, a student!”

The coach in question was UU teacher Heleen van Ravenswaaij, who noticed that the supervision really helped the students. At the start of the course, she spoke with every single student about their expectations for the course and what they could contribute to it. There was another meeting at the end of the course, although students could decide for themselves whether or not to join. “I was rather surprised when five out of six students indicated they did want to have a chat.” In the meetings, the students stated they didn’t see a lot of difference between the participating universities, but Van Ravenswaaij did. “It isn't common for most universities to offer challenge-based learning, so we can see that each student has a different approach to a problem. You’ve got the academically-inclined UU students, who like to do research on what’s already known about the problem, and you've got the Eindhoven student, who tends to focus on solutions.”

One thing that helped this team specifically, was starting each meeting with a personal check-in, which they called ‘Joe’s check-in’. They discussed how people were feeling, how they were doing mentally, how to improve group bonding, and how to understand each other better. Wendy explains why this was useful: “For other courses, if there’s a group member who’s not doing their part, that’s usually annoying. With this group, we often already know who’s really busy, so it helps us to empathise. There’s a very low threshold for voicing your opinion.”

The students didn’t really notice that they came from different universities. That only became relevant when they started to meet up in real life and had to pick a location. What they did notice is the difference in disciplines. Wendy, who’s doing a Master’s in Pharmacy, indicates that she’s learnt a lot from Joe, who’s doing a Master’s in Urban & Economic Geography – thanks to his studies, he knows more about how a city works. Sjors, who’s doing two Bachelor’s in History and Art History, also took a step away from his discipline: “Working on a project like this, and finding solutions rather than analysing historical issues, is completely new to me. I usually spend my time in museums, archives, or the university library, and a book from 2003 would be an incredibly recent source for my research. In the Covid challenge, you suddenly find yourself in the eye of the storm of science development.” 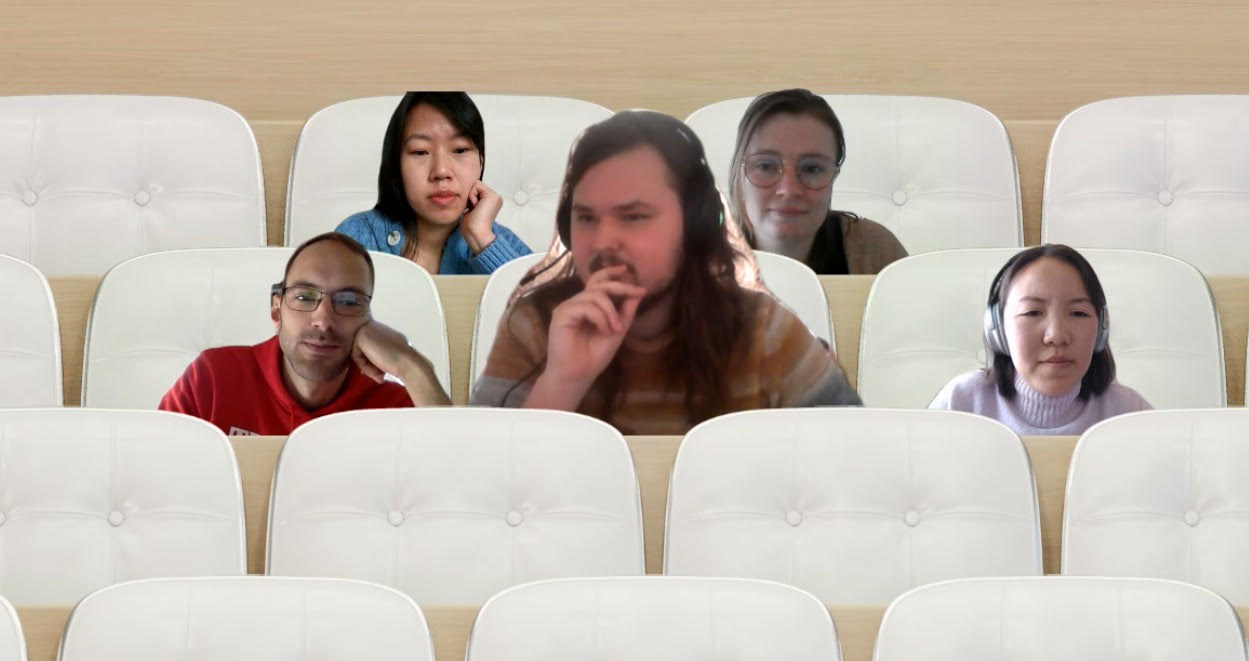 Why did you sign up?
"I love a good challenge. I saw the announcement on the Pharmacy Master’s Blackboard page and I liked the course description. I thought it would be interesting to work on a current problem, and that our ‘deliverable’ might actually be innovative."

Why did you sign up?
"When I heard about the Covid Challenge, I immediately decided to sign up. I thought it would be a unique opportunity to look beyond my humanities bubble. I wanted to challenge myself, as a history and art history student, to focus on current societal issues".

Studies: Master’s in Educational Sciences at the UU

Why did you sign up?
"I signed up for the Covid-19 Challenge because, as an educational scientist, it’s interesting to experience the concept of challenge-based learning. In my dual role as primary school teacher (I’m a substitute teacher) and student, I’ve noticed how the corona regulations influence education, social contacts, and people’s general wellbeing. With this project, I can contribute a little in the solution of these problems."

Studies: Master’s in Urban & Economic Geography at the UU

Why did you sign up? I signed up for the Covid Challenge course because I liked the idea of doing something applied, not just research, and I wanted to have some structure since I've spent my whole year with no classes, just working on my thesis.

Studies: Master’s in Innovation Sciences at the Eindhoven University of Technology

Why did you sign up?
"I chose to participate in this challenge because I wanted to leave my tech bubble for a while. At Eindhoven University, I’d taken a number of challenge-based learning courses, and they were always super fun and educational."

Tuul decided not to contribute to this article