Picture of the European flag: Pixabay. Picture of Eveline Crone courtesy of HOP

The Netherlands is remarkably successful in European research grant competitions. That’s great, but what about the other member states? “Researchers in one country aren’t smarter than in another”, says Eveline Crone, Vice President of the European Research Council (ERC).

The European Research Council is celebrating. The Council, which disburses hundreds of millions of euros in research funding annually, today awarded a grant to its ten thousandth laureate.

A wonderful milestone, in the words of ERC Vice President, Professor Eveline Crone. “It’s good to celebrate that ten thousand researchers were able to chase their dreams.”

Many of these dream chasers come from the Netherlands. In the rankings of those awarded ERC grants, our small country regularly comes in fourth – or sometimes even third – place, only bypassed by European ‘powerhouses’ like the United Kingdom, Germany and France.

Seeing fantastic proposals being turned down for funding: that’s what I find most difficult about my role at the ERC

But looked at another way, there are still many member states who score much lower in the battle for European research funding. Particularly researchers from East European countries, such as Poland and Romania, seldom carry off a prize.

This creates a vicious circle. Successful Dutch researchers gain even more experience and the country as a whole continues to score high, while other countries find it difficult to get a toehold. Serious consequences ensue, because if you say, ‘Let’s increase the European budget for knowledge and innovation’, how do you explain the cost to countries that keep getting left behind?

Last summer many member states – including the Netherlands – wanted to cut back the EU budget and research got the short end of the stick. Government leaders earmarked billions of euros less for research and innovation than had originally been proposed by the European parliament.

“We were completely shocked by the decision to hold back on additional funding even though that had been put on the agenda”, Crone says. Because less funding means even fewer grants to distribute. “Seeing fantastic proposals being turned down for funding: that’s what I find most difficult about my role at the ERC. And this is happening while there are so many opportunities for putting excellent European research on the map. But to do so we really have to increase the budget.”

The idea is that people gain experience and exchange ideas

The question is: how do you break out of the vicious circle? How do you ensure that other countries also get a share of the benefits, so that Europe actually invests more in science, whereby everyone – including the Netherlands – moves forward? Crone is an advocate of “more permanent” international collaborations. Dutch success is good, but a strong knowledge infrastructure in Europe is much better.

That’s the reason that the ERC set up an exchange programme five years ago under the motto ‘learn from the best’. A researcher from Poland or Hungary, for example, can work with a research team in countries like France, Germany or the Netherlands for several months. “The idea is that people gain experience and exchange ideas”, Crone says, “for example about how to set up an innovative line of research.”

And it seems to be working, according to the figures. Since 2016, 67 researchers from countries such as Hungary, Poland, the Czech Republic, Croatia and Slovenia have taken part in this programme. The exchanges led to 24 ERC grant applications, six of which were awarded. That’s a high success rate of 25 percent – twice as high as the normal average.

It takes a lot more to bring an excellent idea to fruition. And we in the Netherlands seem to be quite good at it

“Researchers in one country aren’t smarter than in another”, Crone says. “There isn’t a single reason for assuming that there are differences in potential. But it does take a lot more to bring an excellent idea to fruition. And we in the Netherlands seem to be quite good at it.”

In Crone’s opinion, Dutch researchers can be characterised by, for example, how internationally oriented they are. “Many of our researchers trained in international labs and have gained experience by working in lots of different places all over the world.”

And don’t forget that Dutch researchers have been relying for years on funding bodies like the Dutch Research Council (NWO) for financial support, while that organisation has also been around for much longer than the ERC. Does that mean that we in the Netherlands, albeit mainly out of necessity, have by now become experts in writing grant applications? Crone thinks this is true. “The NWO Talent Programme, for example, contains many similar elements.”

At the ERC, we focus on groundbreaking ideas that help knowledge and science move forward

The heart of the matter remains: investment in research and innovation is extremely important, even if it isn’t immediately clear what you’ll get out of it. “The impact of research is often only visible in the long term”, Crone says. “Solutions for pressing societal problems are often in fact based on research that was carried out much earlier.”

A striking example in her opinion are the vaccines against Covid-19. These are based on ERC grants, she says.

Ideally, therefore, such research would be conducted throughout Europe. In order to reach this level of internationalisation there has to be better distribution of knowledge and money among the member states. At the same time, we can’t relax the standards for excellence in research. But these two things are not mutually exclusive, Crone believes.

“There is a big discussion about what exactly excellence in research means”, she says. “At the ERC, we focus on the excellence of ideas – the search for groundbreaking ideas that help knowledge and science move forward. The ERC also keeps track of whether grants that have been awarded actually lead to major scientific breakthroughs. A portion of the projects fail to do so, but that is just part of the formula. We simply want to fund the very best research.”

But isn’t an applicant’s CV taken into consideration? Doesn’t that mean that West European researchers, who know the ins and outs, already enjoy a head start? Crone thinks not. “Obviously, the applicant for a grant has to be capable of leading the research project to a good conclusion. But it’s the idea that comes in first place. Only afterwards is consideration given to the CV of the person who’s going to be leading the research.”

In any event, it is important for European countries to partner together to be able to compete with China and the US, for example. “We are incredibly grateful now for research projects that were started as long as twenty years ago”, Crone says. “That’s why I see it as my responsibility within the ERC to help current innovative research move forward as well, so that our children can reap the rewards of these projects in twenty years’ time.”

What is the ERC?

Researchers from all over Europe write and submit project proposals which are then adjudicated by a committee of experts who distribute the funding. That is in a nutshell the idea behind the European Research Council.

The ERC was set up in 2007 and the Netherlands was a driving force behind its establishment. The European Research Council is very similar to the Dutch funding body NWO, which also receives applications for funding from researchers. There are different kinds of awards for researchers at different stages of their careers, including starting grants, consolidator grants and advanced grants.

The then PvdA Minister of Education Ronald Plasterk even said in 2008 that the ERC could eventually come to replace national funding bodies like NWO. That has not yet happened.

This week the ERC awarded a grant to its ten thousandth laureate. Among the ERC laureates are many prestigious scientists, including winners of the Nobel Prize and the Fields Medal. Some researchers have even won a second ERC grant, such as Crone herself.

Between 2021 and 2027 the ERC has 16 billion euros to disburse. Will that be enough to ensure a reasonable success rate? Over the years just 12 percent of applicants have received a grant, and that portion seems set to decline. In the last round of awards of the prestigious advanced grants, 8 percent of applicants were honoured; three from Utrecht.

And what about Brexit? There was a fear that Brexit would hamper British researchers, but eventually a deal was struck and the Brits are still allowed to participate in the research programme.

The Netherlands often scores high in ERC competitions. If you add up all the years together, we take fourth place with 936 awards, right behind the United Kingdom, Germany and France. And these are much bigger countries. Measured against the size of the population, the Netherlands takes a bronze medal, after Switzerland and Israel, who are both able to participate through their 'Associated Country' status.

In order to give a picture of the problem Crone wants to tackle: Poland has only won 41 grants and Slovakia no more than one. 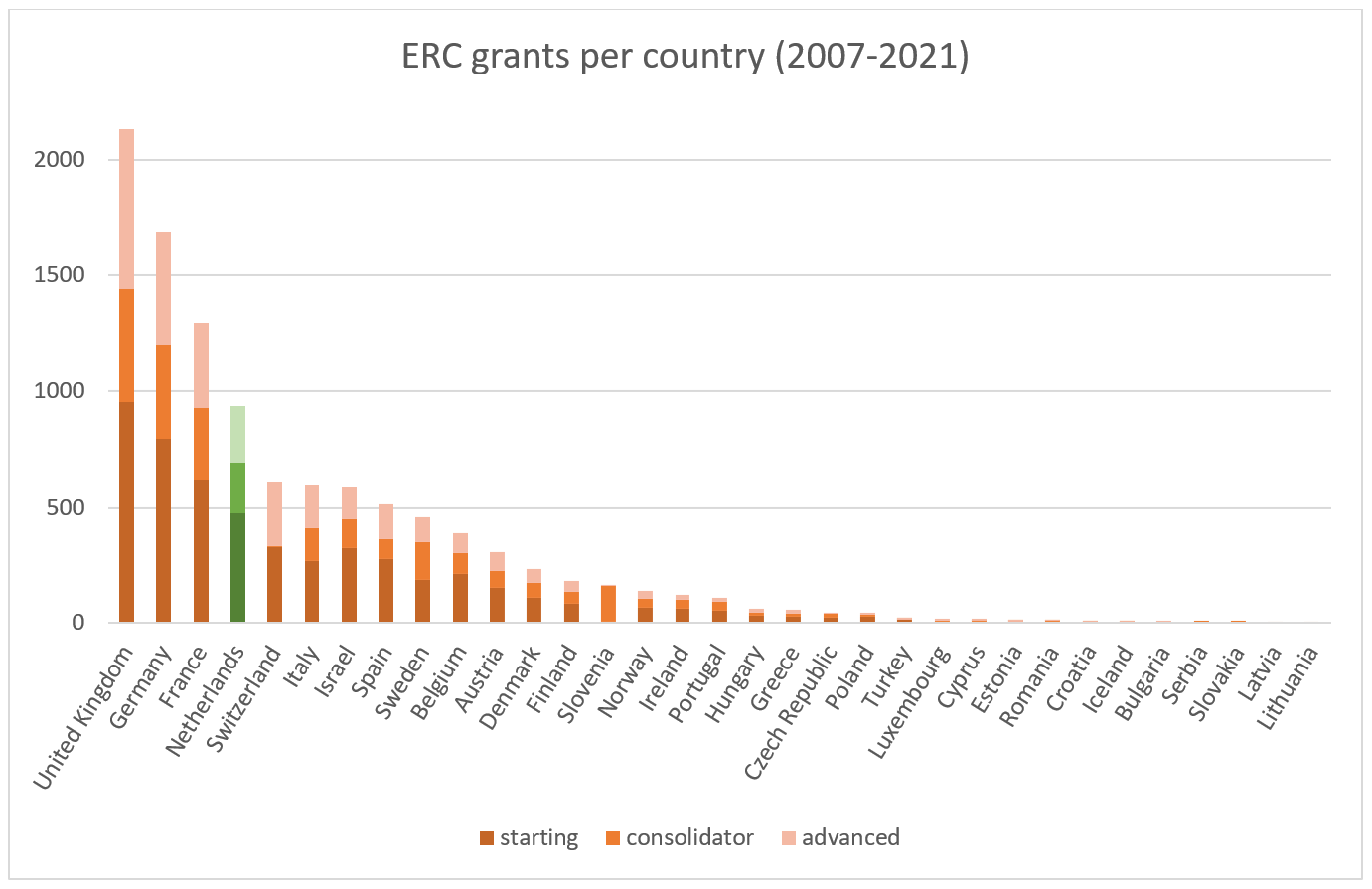 Who is Eveline Crone?

She is known to the wider public for her bestseller Het Puberende Brein (The Adolescent Brain; 2009), which has been translated into six languages and of which more than a hundred thousand copies have been sold. The book explains how brain development influences adolescent behaviour.

Crone has been the recipient of all kinds of prestigious scientific prizes and grants, such as the NWO’s Veni, Vidi and Vici Grants and two ERC grants. At the age of 41 she won the Spinoza Prize, the highest distinction in Dutch scientific research.

Her research field is childhood development from birth to adulthood, with a special focus on the period of adolescence. Her research takes a science and society approach: by carrying out fundamental research, her lab wants to contribute to solutions to weighty societal challenges.

In addition, she is one of the founders of Athena’s Angels, a campaign group of four women professors who are fighting for equal opportunities for women in research. The other three members are Judi Mesman, Naomi Ellemers and KNAW President Ineke Sluiter.

Crone is Vice President of the Scientific Council of the ERC, the European Union’s flagship programme of excellence for innovative and groundbreaking research.