High workload among academics is nothing new

The high workloads experienced in the world of academia have been a hot topic among students and lecturers for some time. In a symposium held on October 8, cultural historian Dirk van Miert presented a historical perspective on the issue, showing that high workloads are nothing new among academics. In fact, the problem exists since the 16th century. “Working hard was considered a bit heroic back then.”

“The first autobiographic accounts of scholars literally working themselves to death originate from the early modern period, between 1500 and 1800,” explains Dirk van Miert, cultural historian at Utrecht University. “It was not unusual for academics to still be writing on their deathbeds, and many of them died of diseases that were caused by their hard work. For example, some scholars had urological problems because they did not go to the bathroom often enough.”

According to van Miert, hard work was regarded as something heroic. “Academics derived status from prioritizing work over sleep and taking good care of their bodies. There are stories of scholars staying awake every other night, or only closing one eye at a time, in order to work more. There was no coffee back then, so people had to find different ways to stay awake. Thomas Platter, a Swiss scholar from the 16th century, reportedly ate mouthfuls of sand to stay awake. He also ate turnips, even though he despised them, and drank vinegar. With these stories, scholars wanted to convey that using the mind and contributing to science was more important than keeping the body healthy. The finiteness of the body was viewed as a limitation on the mind’s capabilities. 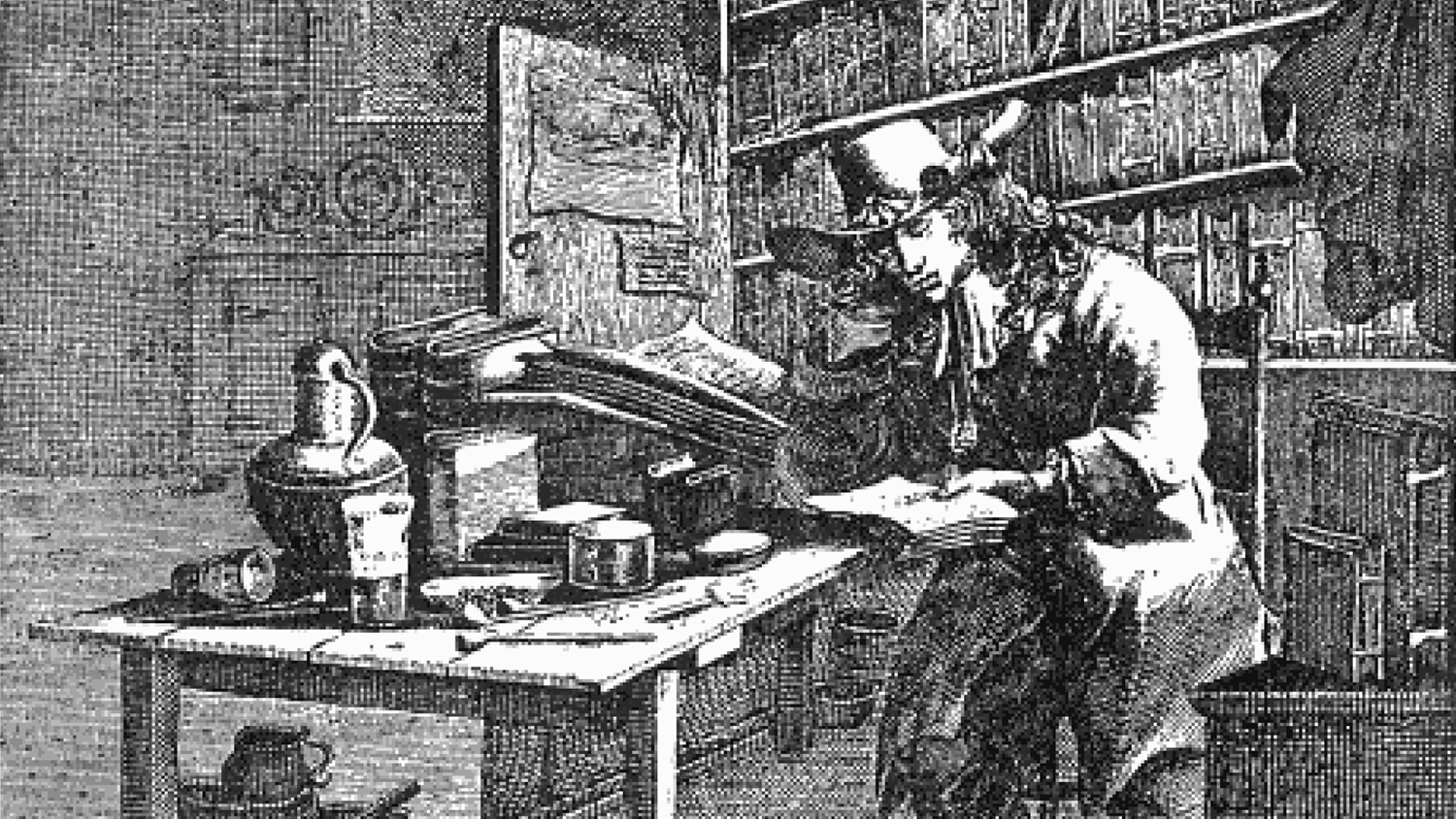 A student in his room circa 1700. Reproduction of an engraving, courtesy of H.R.

“Thanks to the scholarly documents, we also se that they had a hard time combining work and private life,” van Miert says. “’Friends are the enemies of the scholarly pursuit’ is a saying from those times. Many scholars complained that having to take care of their families stood in the way of their studies. Getting married was considered bad for your career, too.”

'Friends are the enemies of the scholarly pursuit'

“We should take these stories with a grain of salt, though. Since hard work was regarded as honorable, it’s likely that many scholars exaggerated their work ethic in their autobiographical works. Moreover, hard work was not only a virtue for academics. Particularly during the Industrial Revolution, the workday was extremely long for people in all walks of life. Unique for academics was how positively working hard was regarded: it was a conscious choice, a calling.” 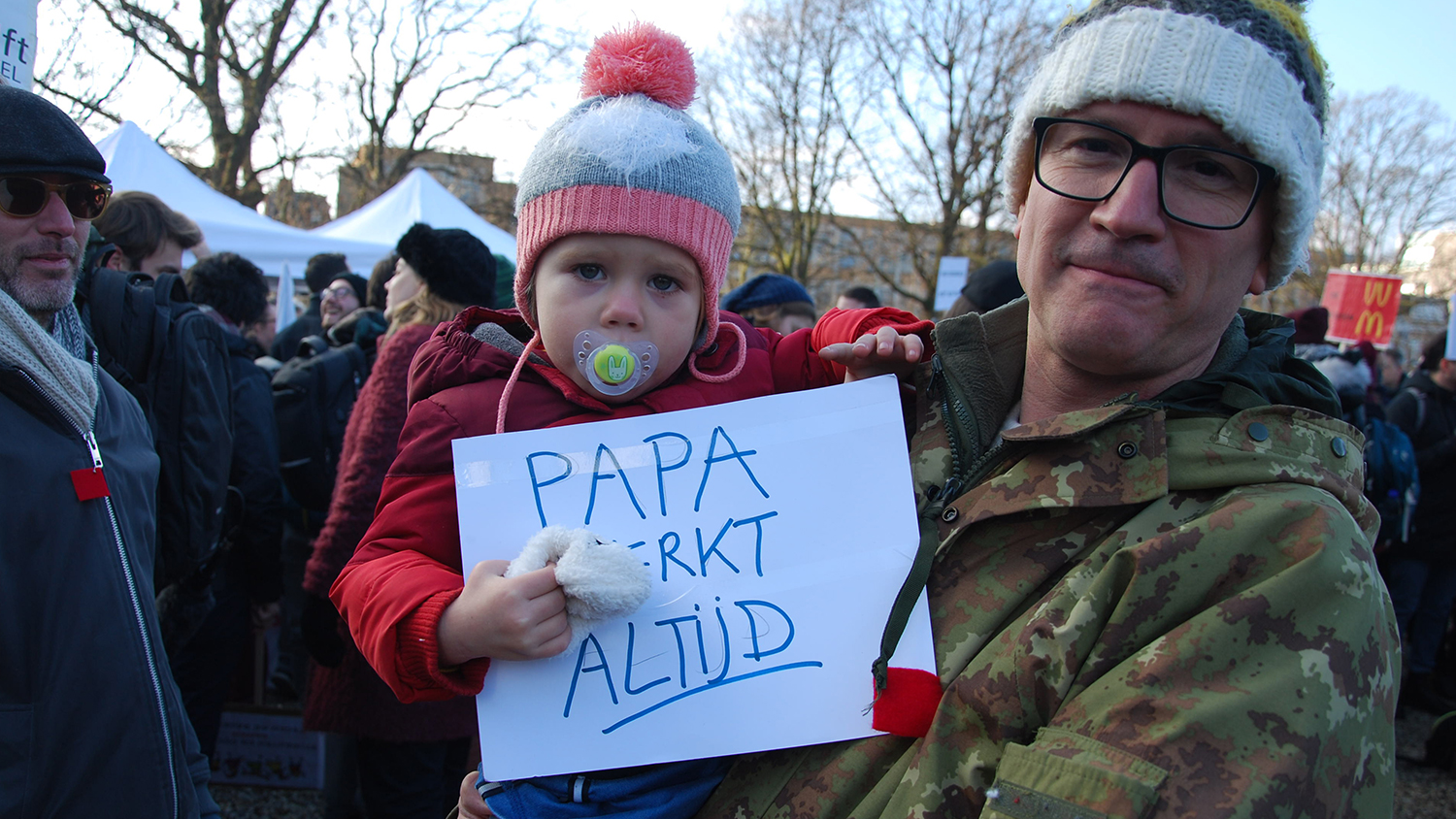 "Daddy is always working," says the sign carried by an academic's kid during a protest organised by WOinActie, a group opposing excessive workloads in academia. The Hague, December 14, 2018. Photo: DUB

But not everyone chose this brand of martyrdom, notes Fenneke Sysling, a history lecturer at Leiden University. “Samual Smiles, a Scottish author, wrote a self-help book for scientists in the 19th century, guiding them towards finding a better work-life balance. Smiles argued that a good night’s sleep was important for a healthy life, though the number of hours needed may differ per person. He also recommended scientists to exercise regularly and not drink too much coffee, tea, or opium. Although much more is known today about keeping one’s body healthy, the fact that it was a topic of interest even back then shows that working too much is not a new issue.“

High workload is seen as a problem nowadays, back then people worked hard voluntarily

Still, a self-imposed high workload was not seen as a big problem back then, as opposed to today. “Criticism on long workdays is a phenomenon from the last couple of decades,” stresses van Miert. “Nowadays, we also see students expressing their opposition to high workloads, as well as their solidarity with lecturers.” 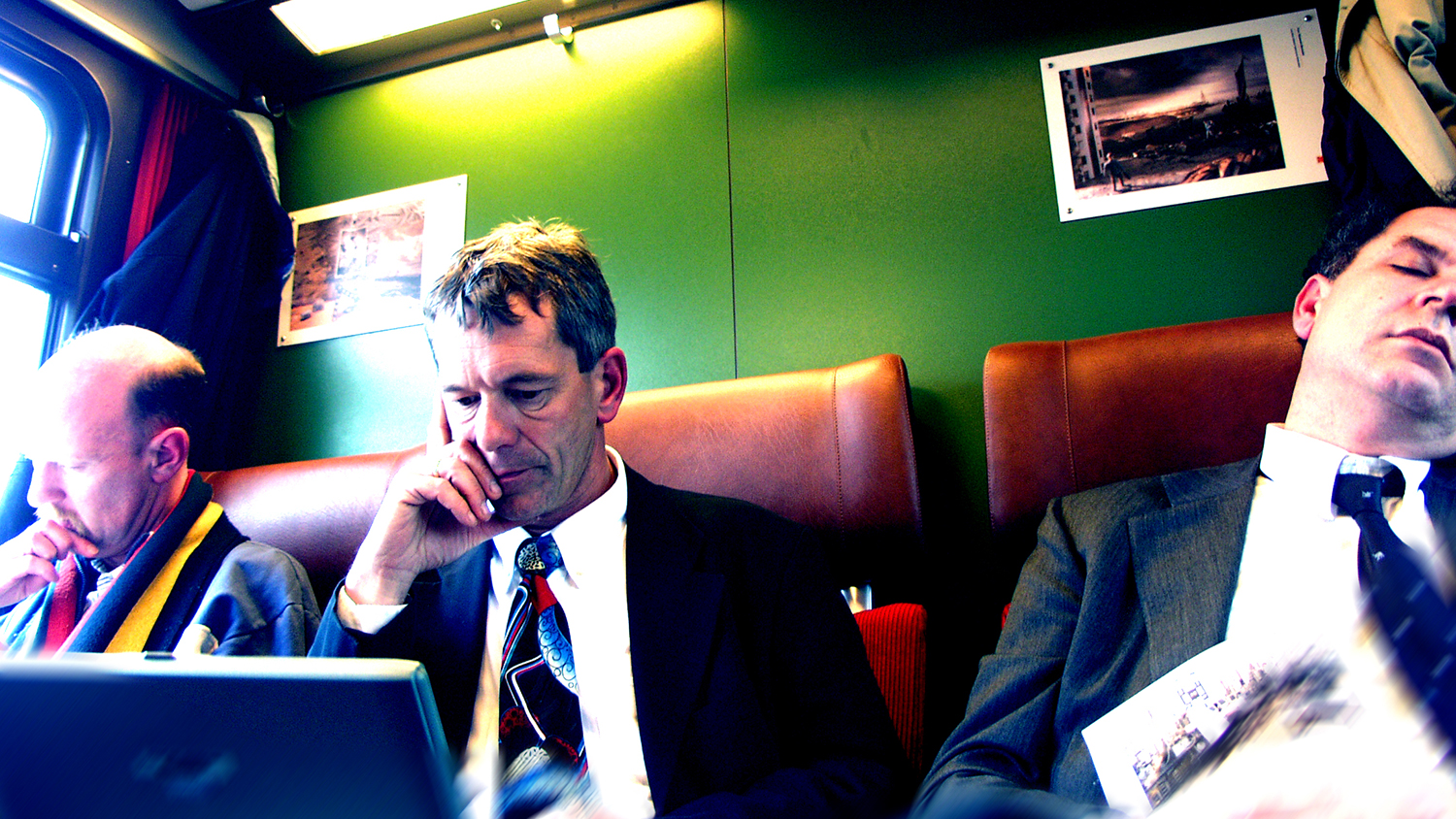 According to van Miert, this is due to the increase in obligations academics have been experiencing in the last couple of decades. “Back then, working that hard was voluntary. Scholars like revolving puzzles, it's almost like an addiction. Nothing about that has changed or is, in fact, wrong. Besides, academics are driven to contribute to science, to gain more knowledge.”

“What is different today, is the significant increase in institutional obligations which has been going on in the past few years,” van Miert says. The number of students enroled at Dutch universities has been growing steadily, while the government's investments in higher education have been declining.

Herman Paul, professor of History of Human Sciences at Leiden University, explains: “Educational activities keep taking more and more of the academic’s time. The number of people who are able to go to university is growing, but funding is not increasing accordingly. Because universities are seeing their budgets dwindle, they keep requiring more and more justifications on what their money is being spent on. That means a lot more administrative work for academics. Moreover, outside pressures to work and deliver have grown, leading to increased stress levels. Due to the increasing pressure of teaching, there is less time left for research. Actually doing research is something that has been relegated to employees’ free time more and more often.”

Christiaan Engberts, a cultural historian at UU, just like van Miert, argues that researchers today feel a huge pressure to perform well. “In order to get funding for research, ‘just working hard’ is simply not enough anymore. Research has to be innovative in order to be appreciated,” Engberts says. 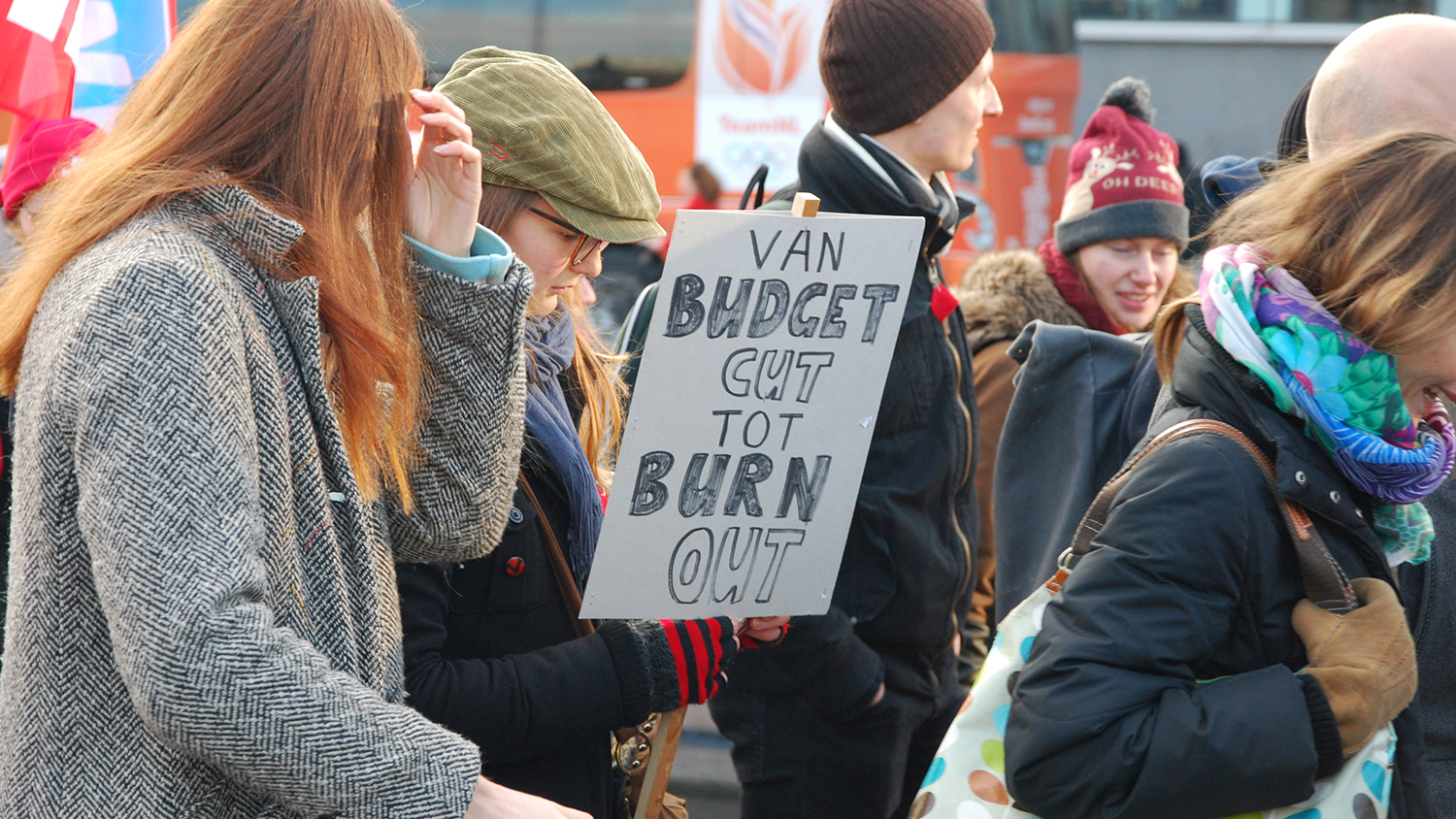 "From budget cut to burn out", another sign carried during WoinActie's protest in The Hague, December 14, 2018. Photo: DUB

Although people have stopped literally working themselves to death, burn-outs and drop-outs are not uncommon among academics. Dutch universities have consistently been telling the government that they need at least one billion euros more, something that has been confirmed by an independent research firm and the minister of education. On this year’s Prince’s day (the day when the government's yearly budget is announced, Ed), the demissionary cabinet manifested its intention to reduce costs in higher education even more, which will only increase the pressure experienced by academics. According to Dirk van Mient, work is not the issue, as long as that work inspires you. Low-impact work, such as administrative work, leads to harmful stress levels, which is why it should be dealt with. Until then, we may be better off listening to Samuel Smiles: "take a walk and sleep enough hours." 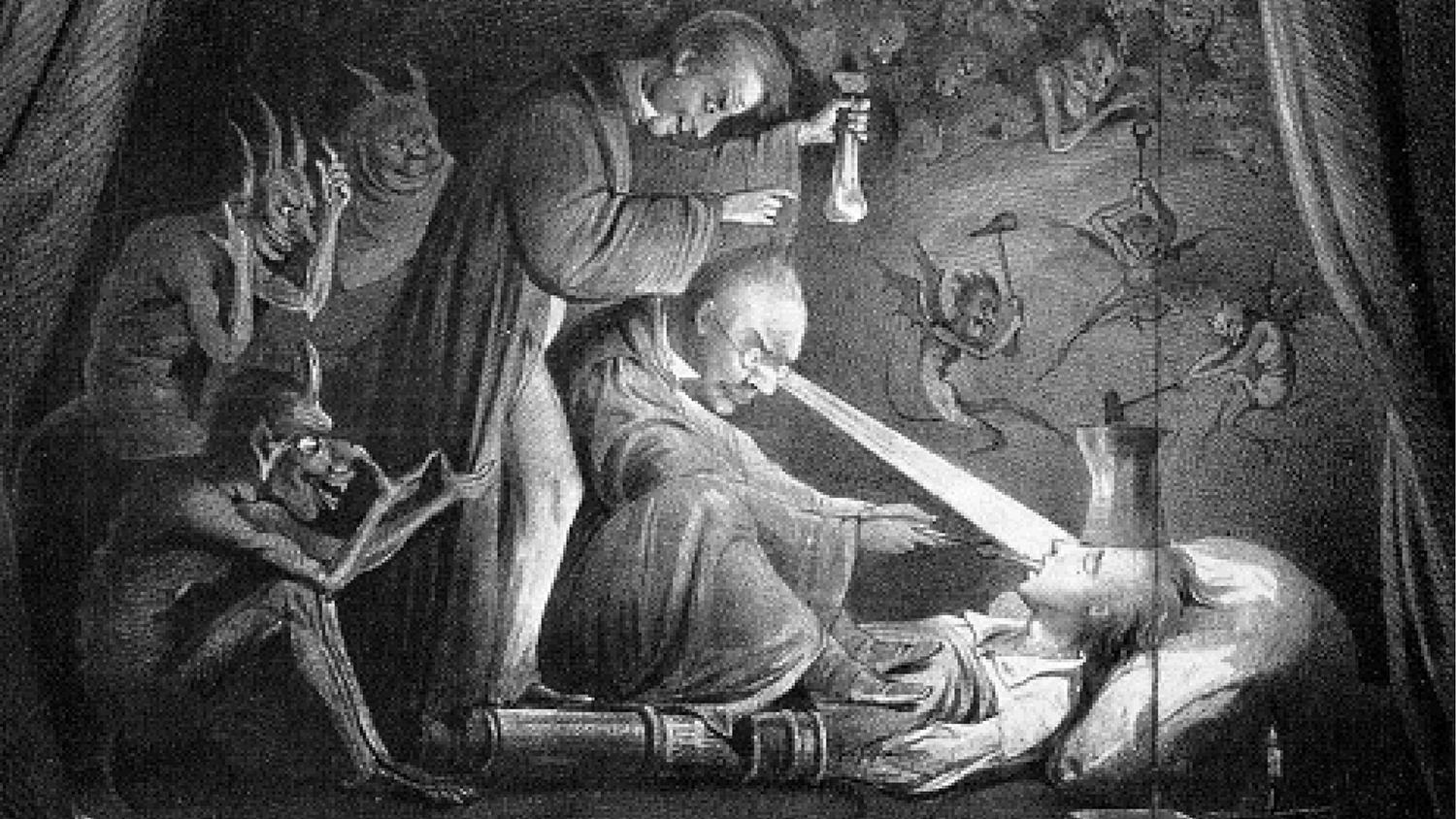