‘I started feeling more and more handicapped at university’

Lily at the Drift in the centre of the city

Not being able to enter the building, not fitting behind a classroom table, and inadequate information. These obstacles, in combination with her health, led to wheelchair-bound Lily Kenter’s decision to quit her university studies. “It was highly disappointing, constantly being excluded.” Utrecht University will learn from Lily’s experiences.

Despite her long workday, Lily wheels into the Public Library in Almere full of liveliness. Back when she was a student of Artificial Intelligence (AI) at Utrecht University, she liked to come here to study. She moves to the lift and pushes the button. “In most lifts at the university, the buttons were at eye level, which meant I often couldn’t reach them.” And as opposed to this library, the university buildings often weren’t wheelchair-friendly enough, and Lily was forced to quit her studies.

Wheelchair-accessible is not the same as wheelchair-friendly

Lily started her studies in 2017. “I chose AI because I love physics, language, and solving problems. And I’d wanted to learn to programme for a long time.” She quickly encountered numerous problems in her first year. “I immediately knew I wouldn’t be able to meet the ‘bsa norm’ (binding study advice, ed.). My muscle disease means I’ve got limited energy, I get sick often, and my bones break easily. In high school, there was a lot of space for me to take it easy, but the bsa norm could not be adjusted in advance, which caused a lot of stress.” Whereas regular students only have to study for their exams and make the assignments, Lily had to do all that as well as fight a constant battle to be able to participate in the first place. “I had to explain my situation for every single exam, and ask for extra time.”

She also encountered practical problems. The distances between classrooms often were too great for her to cross in time. There were some buildings she couldn’t enter without help, and with her wheelchair, she often didn’t fit in between the folding chair and table in lecture halls. “Wheelchair-accessible is not the same as wheelchair-friendly. First, you have to wait outside the building until someone walks by. Then you have to ask that person whether they’d be okay with asking the reception desk inside for a ramp, then the reception desk worker has to find someone who knows where the ramp is located and who can install it correctly, and then, fifteen minutes later, you’re finally inside.”

The bad or impossible wheelchair accessibility was mostly annoying during exams. “Before a re-sit, I had repeatedly emailed whether the space scheduled for the exam was wheelchair-accessible. First, I’d received a confirmation, but then the night before the exam, I received an email that stated the room wasn’t accessible after all. It’s highly disappointing to be excluded like that.” Because she wasn’t able to enter the main room of her study association either, getting in touch with classmates was also a difficult task.

Lily experienced stress, too much stress. “For every new course, I’d use Google Maps to zoom into the university buildings, to check whether I could come in. After so many thresholds and difficulties, I became paranoid and afraid of encountering even more of them. I was always emailing and checking.” When one day, she wasn’t able to enter her lecture hall at Janskerkhof 2-3a, she’d had enough. “I’d already held elaborate conversations with people who’d promised me I would definitely be able to enter the building. When after fifteen minutes, I was finally inside the building, it turned out there were stairs leading up to the lecture hall.” She broke down, and detailed her disappointments in an open letter to the university.

The UU is taking measures
Lily’s letter did not go unnoticed, and came at a time when the UU had decided to take action to better facilitate students with disabilities. As one of the first, the head of education support and student affairs, Andrea van der Weiden of the Faculty of Humanities, came together with several directly-involved colleagues to talk to Lily. “We want to make sure we prevent any future students not being able to enter a lecture hall, or not having enough time to get from A to B,” Van der Weiden says. “If a student contacts the study advisor at an early stage, it’s possible to discuss optimisation of the schedule.” For future students, the bsa procedure has also been changed, she says. “If, at the start of someone’s studies, it’s already clear you won’t be able to meet the bsa norms, then (since this past academic year) you can get an adjusted bsa at Humanities now.”

Richard Horenberg, coordinator of the Platform Studying Without Limitations, recognises the problems Lily faced. “It’s truly a nightmare to have to study like this. It concerns a small group of people, but they face enormous obstacles that most people don’t even see. After all, for most people, it’s easy to just step over a threshold.” Partially thanks to Lily’s letter, this situation has changed somewhat in the past year and a half, he says. “People are now starting to see that there really are students who face obstacles because of their disability, or even have to drop out. The letter’s also made waves in the Administration Building (where the policy makers work, ed.), and they’re taking steps as well.”

“For instance, communications officer Govert-Jan Slob visited every single building to map their accessibility,” Richard says. “Since last summer, this information, including photos of thresholds, lifts, and lecture halls, can be found on the university’s website, on its Buildings page.” Furthermore, the university is busy improving the processes surrounding the application, attribution, and registration of facilities. “Ideally, every teacher will be able to check in Osiris whether you’ve got a right to, for instance, additional time in exams, or any other facility. Having to email teachers before every single test and showing your educational contract won’t be necessary anymore.”

Steps towards accessibility
Last year, the Platform started a buddy programme, in which students with disabilities can advise and help each other, Richard says. “This could mean things like helping a student in a wheelchair get to the other side of De Uithof every week, or helping a student with ADHD with their planning.” The Platform is currently subjecting sixty university buildings to a test of their user-friendliness. “We show up with a wheelchair, and take stock of all the practical problems we face as wheelchair users. Coat racks and card readers too high up on the walls, lift buttons without braille for the visually impaired, route signs that point to bathroom facilities for people with disabilities: they may seem like small things, but added up, they could mean that for people with disabilities, visiting this building would be highly unpleasant.”

The larger, structural accessibility problems are being assessed by Corporate Real Estate & Campus, says programme manager Jan-Willem Moerkerk. “Then, we’re going to solve these issues during the next planned renovation. Small adjustments and severe accessibility issues are taken care of immediately. For instance, last year, we made the entrances of the Koningsberger and David de Wied buildings accessible, realised wheelchair spots in the lecture halls of the Ruppert building and the Bolognalaan, and made numerous study spaces, hallways, and bathrooms wheelchair accessible.” 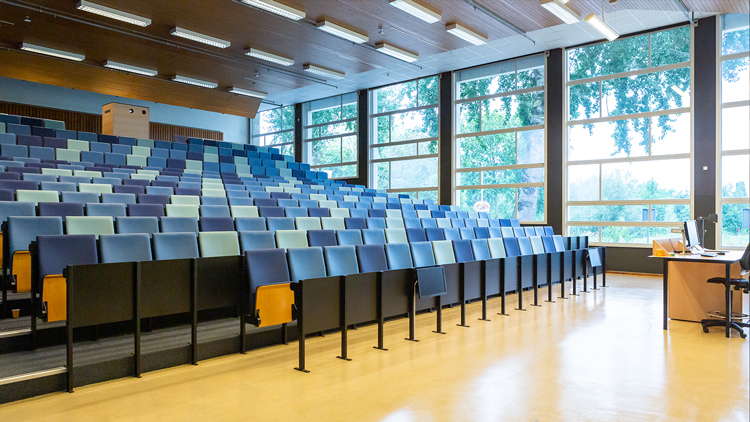 A student in a wheelchair can now sit at the first row, picture UU

“But we’re still a step behind,” Moerkerk says. “Take the Minnaert building, for instance, which is relatively new, but still almost impossible for someone in a wheelchair to enter. And making some of the monumental buildings in the city centre accessible is also nearly impossible.” In order to prevent similar issues in future construction projects, the university has created a checklist with a hundred points. “This will be used to test accessibility during the construction process on four different aspects. We’ve also documented that all educational spaces to be built in the future will be equipped with wheelchair spots and adjustable tables.”

Disabled by surroundings
For Lily, these actions and initiatives came too late. “The faculty was slightly surprised about my story, but heard me out with a lot of friendliness. They were working on improvised solutions, but this wasn’t enough, unfortunately. In my second year, too much still had to happen, and for a large part, I was encountering the same issues.” She wrote in her letter that she wanted to help find solutions, but in reality, this was a disappointment. “If you wanted to make the medieval buildings in the city centre wheelchair-friendly, you’d have to pretty much demolish the entire building, but standing alone, I didn’t want to demand such impossible things. And I couldn’t keep up with studying full-time as well as working to change the entire university. It was just too much work.”

She says that by the time she wrote her letter to the UU, she’d already broken down, really. “I had pneumonia, didn’t have any energy at all anymore, and started doubting myself. The extent to which I feel disabled, is mostly dictated by the surroundings I find myself in. In my high school and at my current job, I can function independently and I felt strong, but at university, it cost so much effort to participate that I started feeling more and more weak and disabled. I’d been determined not to quit, but people in my surroundings slowly pushed me in that direction. In the end, I just had to accept I wasn’t going to make it that way, and that I’m worth more than an environment that makes me feel like crap. I’m now working in an office full-time, where my disability doesn’t get in the way, and where I can participate fully. I still think programming and artificial intelligence are interesting, but I’ll just do those as a hobby now.”

Do you have complaints, advice, or remarks about the accessibility of University buildings? Fill out the FSC form here.