'I think smoking outside doesn't bother anyone'

It hasn’t quite gotten through to all students, employees and guests that they’re no longer allowed to smoke in premises of Utrecht University – yes, even outside. Especially at Utrecht Science Park, people find it hard to believe that they can&#39;t smoke a cigarette outdoors, something that, in their view, bothers no one.

Psychology student Kaylee is smoking a cigarette as she waits for the tram to come. She’s sitting a bit far away from the tram stop, so that the smoke doesn't bother the people there. She didn’t know smoking has been forbidden practically everywhere on campus. She doesn’t mind it, though, as she doesn’t find it hard to follow that rule. “When I’ve only got one work group a day, like now, it’s easy to wait until I’m home.”

Since September 2020, smoking has been legally banned on university grounds and discouraged by the province and municipality at the bus and tram stops of the Utrecht Science Park. The large corporations based at the USP are also collaborating in the plan to make the entire campus smoke-free. Xandra Diemen, from the Foundation Utrecht Science Park, proudly states: “We acted as a community here, with all the partners in this park, including the foundation and all the large companies. By making the entire USP smoke-free, we’re taking the government’s assignment a step further. Everyone should be able to have a nice environment to study, visit, live, and work.” 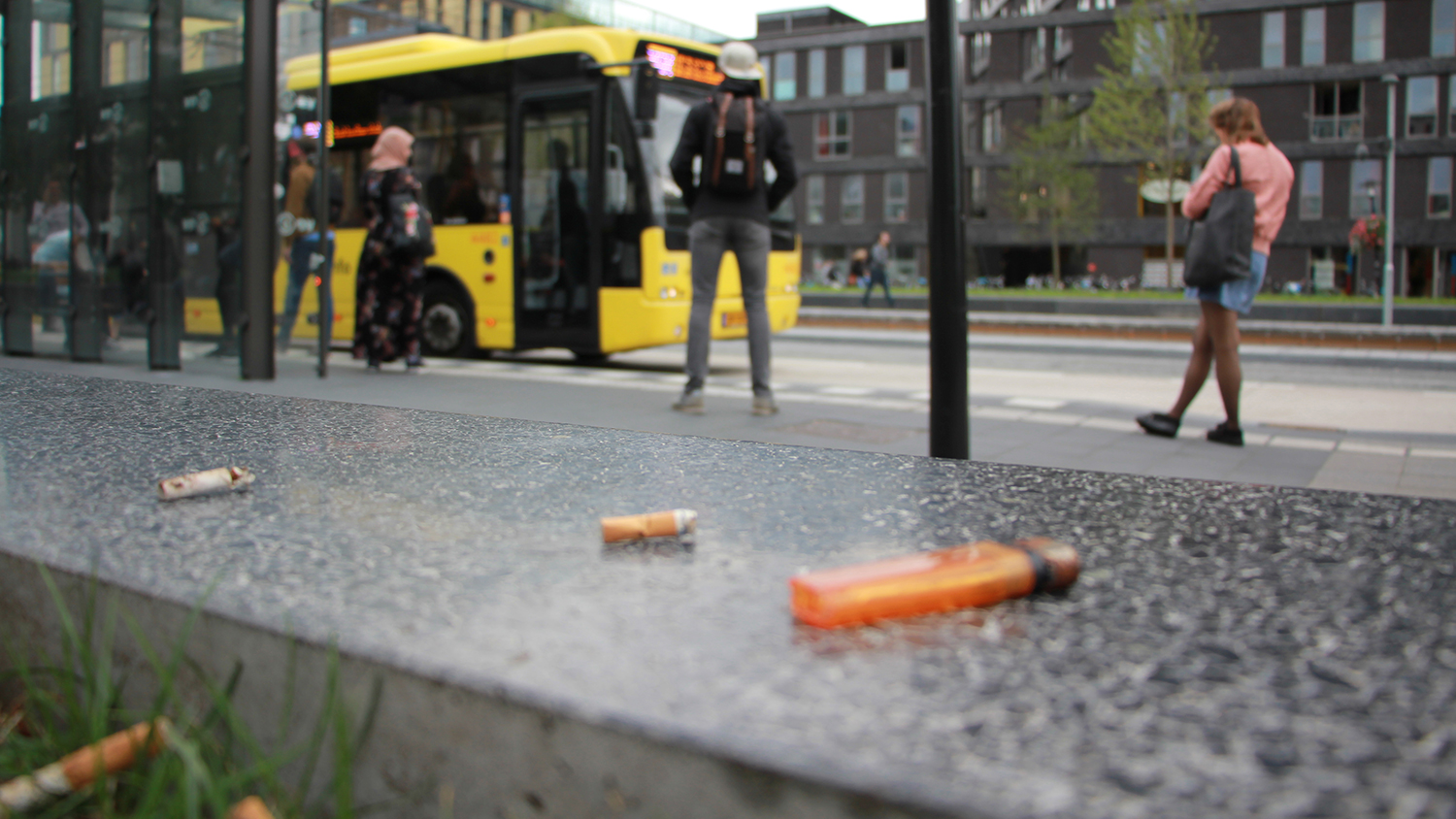 Since January, the Dutch Food and Product Safety Authority (NVWA in the Dutch acronym) has been checking whether the university is adhering to the smoking ban, which is why there are enforcers walking around the campus to address people about the smoking ban. They kindly direct smokers to one of the four locations in the USP where smoking is tolerated.

If you’re studying in the library all day and can’t smoke at all, that’s hard

Kaylee, who thinks the smoking ban is doable, appreciates that there are places at De Uithof where smoking is still allowed. “We don’t have a lot of classes on campus right now, but if you’ve got classes all day, or if you’re going to study in the library all day, and you can’t smoke at all, that’s hard. Especially because we usually spend whole days in the university library during exam weeks, which are stressful enough as it is.” She does, however, want to quit smoking. She says she has already bought her final pack. The smoking ban might just make quitting easier, she reasons.

Uithof resident Anniek is worried about whether or not the enforcers will patrol outside of the centre of the campus as well. “I live on one of Johanna's lower floors, which is far from the centre. Perhaps people will come and smoke here, so that the enforcers won’t see them. I like to have my windows open in the summer, so I’d prefer not to have people standing below them, smoking. It’s hard to keep addressing smokers about their behaviour. I wonder whether that isn’t just trying to empty the ocean with a thimble.”

If you’re addicted, you can’t just choose to quit

Enforcer Stephen Schet doesn’t mind going up to smokers, even though not everyone responds nicely. As an example, he mentions a USP visitor who refused to stop smoking until Schet pointed out a sign saying smoking was forbidden. "You have to be friendly, but serious. Then, they take you seriously too. Otherwise, it won’t work.” He adds that his job takes some mental effort: “You’re constantly entering people’s auras, but you have to close off your own or you won’t last. Most people are very nice, though.” 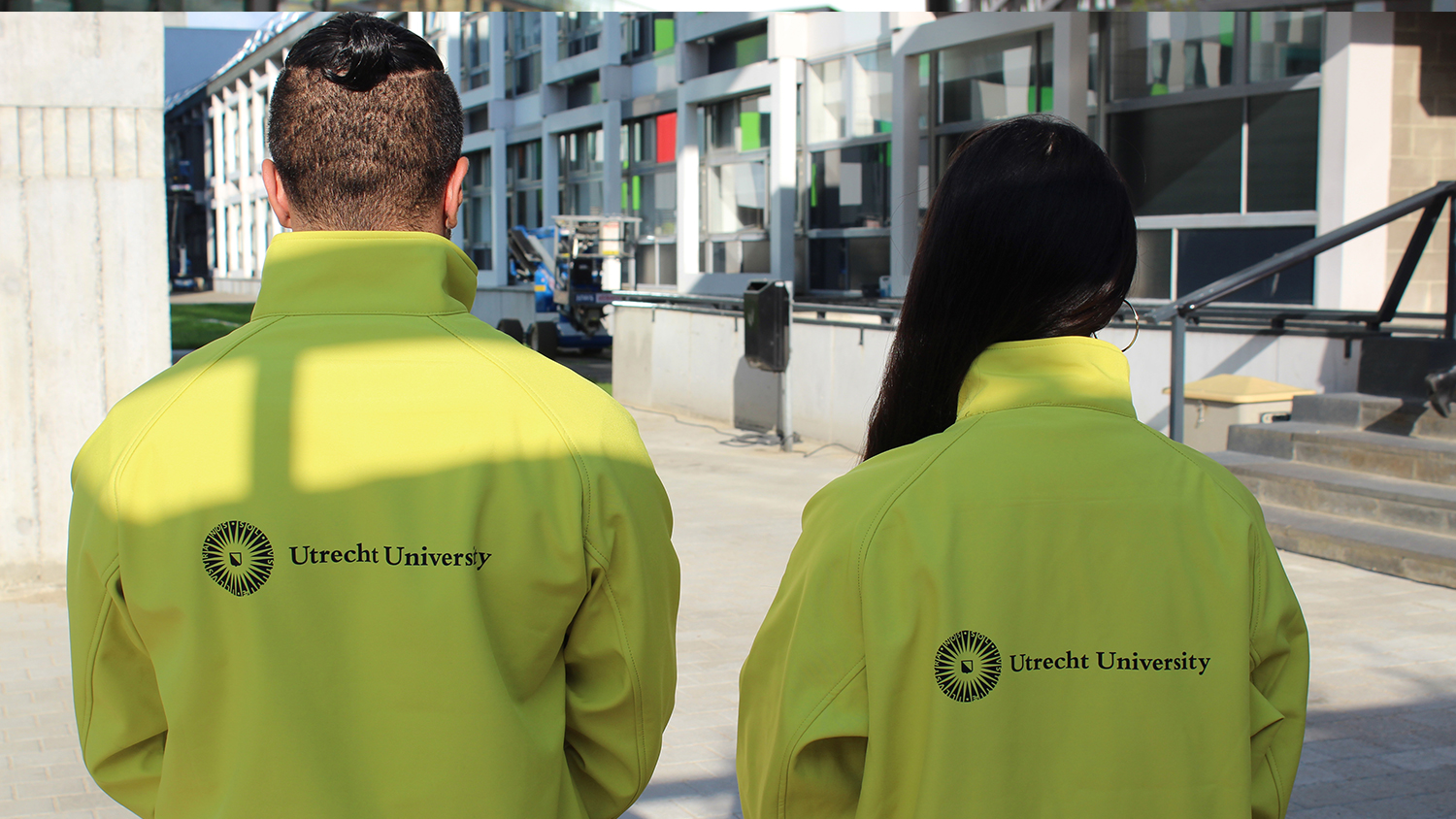 Enforcers like Stephen are present throughout the campus, most of them in the centre. You can often see them cycle by. The reason for staying more at the centre is that there are more people there to approach, such as UU employee V., who doesn’t want to be mentioned by name. He works in the David de Wied building. He says he did know about the smoking ban, but thought it only applied to the areas surrounding the buildings, which, in his view, would make more sense: “I’m walking around on the street while I’m smoking, so I don’t think I’m bothering anyone.”

V makes sure to not ever stand near windows or doors. “That’s rude, just like throwing your cigarette butts on the street.” After the ash tray tiles at the David de Wied building were removed, the cigarette butts have been piling up there. “I take them inside with me and throw them in the bin.” The UU employee would prefer smoking to be allowed at specific locations that are easy to reach, as it now takes him 20 minutes to arrive at the nearest "tolerance zone". Time he’d rather prefer to spend on research.

The colleague V’s walking with, who doesn’t smoke himself, isn’t bothered by his smoking co-worker. Two employees eating lunch in front of Veterinary Medicine’s Androclus building don’t mind people smoking outside either, as long as they're away from others. “Back when people were allowed to smoke indoors, sometimes you'd happen to work in the same office as a smoker, so you had to make agreements about it. Later on, they moved the smokers to a bike shed or behind the building. If you’re addicted, you can’t choose to quit just like that.” 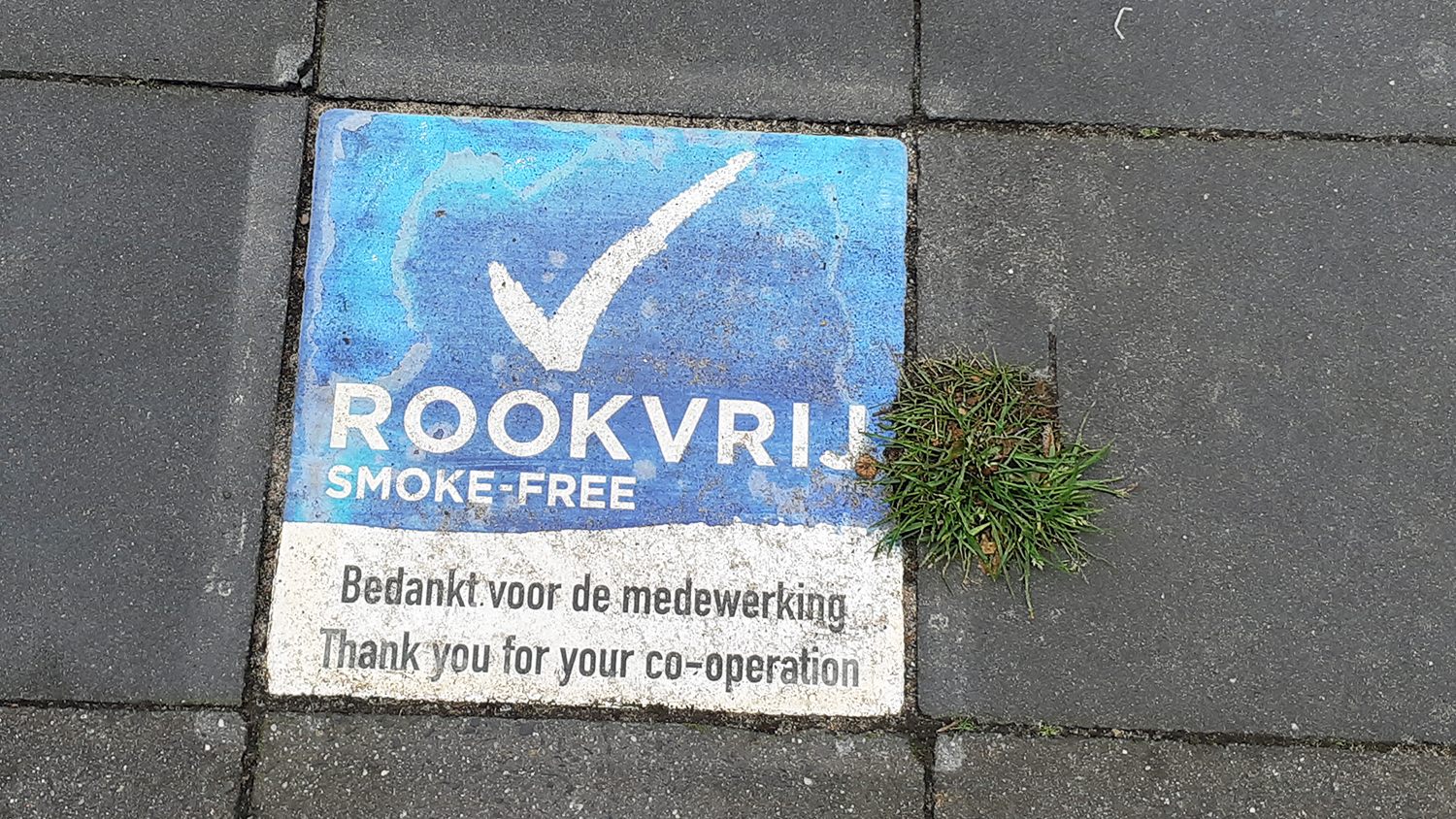 We look at what other people around us are doing, and that’s what we base our decisions on

According to Professor Lars Tummers, who focuses in public management and behavioural change (among other things), it’s a matter of time before the smoking ban has an effect on both smokers and non-smokers. Many people see smoking as a negative thing and a negative memory is more easily remembered than a positive one. “If you see three people smoking outside, you’re not seeing the thousands who don’t do that. That’s how people overestimate how many people smoke. There are two negative effects: the smoking itself, but also the influencing of others.”

For him, the enforcers’ approach is correct. “It does work better to indicate where people are allowed to smoke. That way, we make the undesirable behaviour more difficult to do and the desired behaviour easier to do.” After all, Tummers says, humans are social creatures. “We look at what other people around us are doing and that’s what we base our decisions on. Those choices can be divided into two systems. System 2, in which you rationalise a decision, and system 1, where you do whatever comes to mind. This non-rational thought can have great influence on behaviour.” An example of system 1 is the vegetarian lunch that’s standard in the university’s catering. Those who want to eat meat have to explicitly mention it when ordering. “Most people don’t actively indicate that they want meat. By making vegetarian lunch the standard, the standard itself is slowly influenced.”

This bench invites you to sit, relax, and smoke a cigarette

David, who exited the library for a quick smoke break, doesn’t support the strict rule in place now. “I only smoke outdoors and that doesn’t bother many people. Smoking is my own choice and I don’t think others should get involved in that.” If he were to encounter an enforcer, he says, he wouldn’t put out his cigarette. “You’re technically talking to me about my smoking and I’m still enjoying my cigarette,” he laughs.

Erik, an older man visiting the veterinary clinic, is startled by my question of whether he knows he’s not allowed to smoke there. He hopes not to have to return to the vet anytime soon anyway, but he’ll bring a tangerine to snack on next time. “This bench invites you to sit, relax, and smoke a cigarette. But you can also find peace in the environment here, with the meadows and the nature. You’re still young, it’s better to go for a walk.”