Influential climate scientist: ‘I want to be credible for all parties’

Detlef van Vuuren: the climate problem is considerable and it’s causing a lot of damage. At the same time, this problem is definitely solvable. Photos: Ivar Pel

According to international press agency Reuters, UU professor Detlef van Vuuren is the fourth most influential climate scientist. Why is his work so esteemed? How does one end up on such a ranking? “I think part of it is just luck”, he tells DUB.

“All disaster movies start with a scientist being ignored”, says Reuters in the introduction of its "Hot List". This is the first time the press agency publishes a ranking of influential climate scientists. A thousand academics from across the globe are on the list, including Detlef van Vuuren, professor of Geosciences at Utrecht University, who comes fourth.

“Very nice of course, and an incredible honour”, Van Vuuren (1970) reacts. “Although the ranking does raise a number of questions. There are a lot of names on there that I definitely would have mentioned somewhere, but not necessarily in this order. William Nordhaus, a climate economist who received the Nobel prize for his work, is ranked #173, for example. And James Hansen is one spot below me – he’s one of the first people who said, at an American conference in the 1980s, that we’ve got a huge problem in our hands”.

Reuters itself also remarked that the most influential scientists aren’t necessarily the best ones. To define influence, the agency used an algorithm that took into consideration three criteria: how much the scientist has published about climate change, how often they are cited, and how often media and policy makers refer to their work.

Future scenarios
Van Vuuren is a prominent name in his discipline regardless of his position on the list. As a scientist, he looks for global solutions to the climate problem. Apart from his tasks as a professor at UU, he works four days a week at the Netherlands Environmental Assessment Agency (PBL in the Dutch acronym). There, he calculates future scenarios: what are the long-term consequences of the decisions we’re making now? Which solutions should we be looking at?

In their models, Van Vuuren and his colleagues bring together knowledge from the natural sciences, economics, and social sciences. “We work in two ways. On the one hand, we see what happens when we continue the current policies: where will we end up if nothing changes? On the other hand, we use the Paris agreements from 2015 as a starting point. The entire world agreed that we want to limit global warming to 1.5 to 2 degrees Celsius. We show the roads that would make that possible – and the consequences of those roads.”

Between 2008 and 2012, Van Vuuren led a worldwide project in which a group of researchers developed new climate scenarios. Those scenarios – so-called RCPs – are now used by all scientists across the globe. “That gives you a lot of indirect influence on international climate policy. Our scenarios tend to be fairly innovative – we were, for instance, one of the first who showed in detail how to stay below those 2 degrees. That makes it easier for policy makers to say it is possible. It gives them the ammunition they need to create deals like the Paris agreements.”

There are 39 Dutch scientists on the Hot List, but you’re the only one in the top 100. Why is your research so influential?
“Well, our work is nice and relevant, but I think part of it is just luck. A lot of other climate scientists need our work to be able to do theirs. People at institutions like the KNMI (Royal Netherlands Meteorological Institute, ed.) for instance, who work on meteorological models, but also scientists who study biodiversity. There’s also people who create climate scenarios for specific areas. They too use our global scenarios for context. That means I’m cited relatively often.”

In your view, what makes a scientist influential?
“There are two ways, I think: first, when others can build on your work. Secondly, when you’ve got direct influence on policies or society. In my field, it’s a little bit of both. I got into this field because I felt that something had to change."

As a student of environmental studies in the late 1980s, Van Vuuren became inspired by the famous report The Limits to Growth, by the Club of Rome, a group of scientists who rang the alarm about the climate in 1972. “At the time, I thought it was an attractive, almost romantic idea that you could solve an issue like this by uniting knowledge from several disciplines and analysing them through a computer model”. 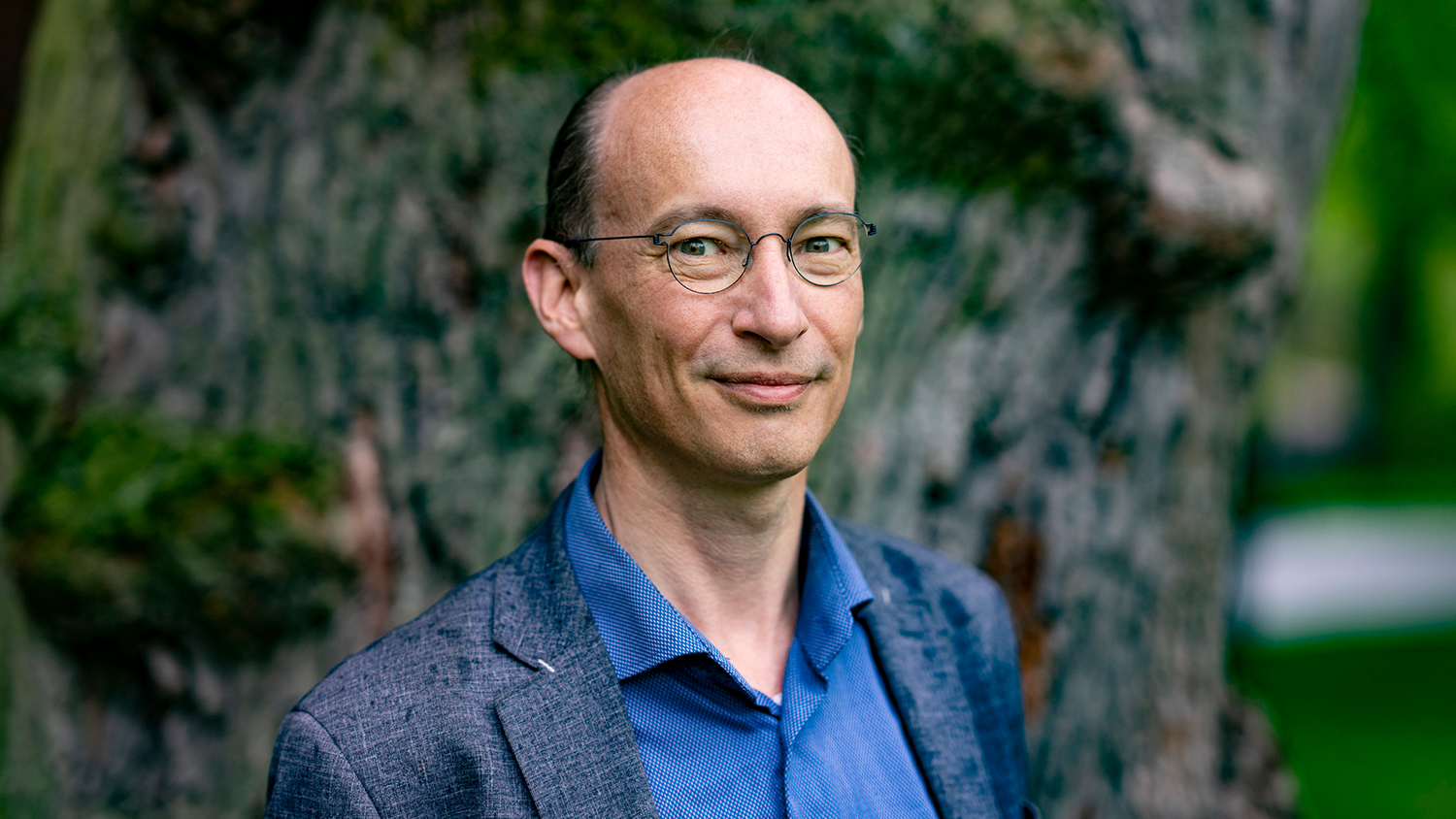 How do you view the role of scientists in the societal debate? Should they get on the soap box, or say: 'we provide the facts and then it’s up to politics'?
“That’s quite a quest for me. If you look at the urgency of the climate debate, and the knowledge we have as scientists, then we don’t have to stand on the sidelines. At the same time, for me personally, I want to stay credible for all parties, especially because of my work for the IPCC and PBL. It’s important that political parties such as the VVD see us as an impartial institution, not as a club that has a certain political vision. At the end of the day, credibility is the most important thing for a scientist.”

How do you handle global warming deniers?
“If I run into someone like that, I at least try to explain that there really isn’t any discussion amongst scientists anymore about whether or not the climate issue exists. It’s nonsensical to claim that now. What we can do is debate to what extent we want to limit the problem, and how.

“You know, as long as we’re not moving in the direction of a single, clear solution, we’re making things quite difficult for people. On the one hand, they’re always hearing: 'if we don’t watch out, the earth is doomed'. And then almost nothing happens. You can’t walk around carrying an issue for too long, that makes you pessimistic. And, well, if someone then happens to walk by who says: 'you know, nothing actually has to happen anyway', that’s one way to climb out of that mental impasse.”

You’ve been working on climate change for thirty years now. In all this time, we’ve only increased our greenhouse gas emissions. Doesn’t that discourage you?
“I’m still an optimist. Yes, the climate problem is considerable and it’s causing a lot of damage. At the same time, it’s so incredibly unnecessary! This problem is definitely solvable. It’s not easy, I know, but technologically and economically, we can definitely do this.”

That’s not something we hear very often. How come you’re so optimistic?
“Problems can increase in size really quickly, but the same holds true for solutions. Take a look at ten years ago: worldwide emissions were lower, but the transition to sustainable energy was incredibly complicated. Sun and wind were a lot more expensive than fossil fuels. And how would we ever get rid of petrol cars? Well, today, renewable electricity is affordable in many places. It’s hard to imagine that, in ten years, people in rich countries will *not* be driving electric cars.

“At the moment, I’m far less optimistic about the real question: can we humans manage to organise this together? Building support turns out to be the most difficult thing. In that regard, the Paris agreements are quite special. In 2009, countries were already trying to make binding agreements, but it was a disaster: everyone got incredibly defensive. That’s why they did things differently in Paris. Countries did decide on a shared goal, but didn’t attach any specific obligations per country to that goal.

“My initial response was: 'what a lame agreement, that’s not going to yield anything'. But now, six years later, we can see that the discourse has changed. Suddenly, everyone knows about the two-degree goal. Far more people are working on the climate – from top managers of large corporations to birthday parties. So, in retrospect, the decision to go for a ‘weaker’ agreement was a sensible one. Whether it’ll be enough? Let’s hope so.”

Lecture: when will the Netherlands be doing enough?
On Tuesday, June 8, Detlef van Vuuren will be giving a lecture (in Dutch) about what the international climate agreements mean for the Netherlands. He will explain the newest insights from the IPCC, the United Nations climate panel. The online lecture is organised by PBL and is free to attend. More info here.