Being called a ‘nazi’, or someone wishing you a ‘Grapperhaus’ situation. It happens to ‘corona coordinators’ who point out the rules of conduct to visitors of UU buildings. Most students and employees have good intentions and listen, but not all of them. “It’s already not normal that at a university, we need people to enforce these rules.”

“Are you serious? So there are students and employees who shout at the people who wear a yellow vest and keep an eye on the corona rules?” A group of students in the Educatorium, hiding from the rain after their exam, is surprised. “You’re an exceptional jerk if you do things like that,” one of them thinks.

And yet, that’s exactly the kind of behaviour that the UU board addressed in a mail it sent to all students and employees mid-September. At that time, the university had already been using so-called corona coordinators (‘cocos’) during classes and exams for a while. The cocos are students or employees who remind visitors of UU buildings to keep their distance, follow the marked routes, stick to the maximum number of people in a room, etcetera.

These cocos receive quite a lot of nasty commentary, according to the UU board’s mail: “Unfortunately, we’re hearing that these coordinators are sometimes treated unfairly and nastily when they kindly ask someone to follow the rules. That is unacceptable. It’s in the core values of our university to treat everyone with respect.”

Keeping your distance
Reason enough for DUB to take a look in the Educatorium, where large groups of students take their exams nearly every day.

This Thursday afternoon, exams are scheduled in the Beta and Gamma rooms for the programme Natural Science & Innovation Management. Fifteen minutes before the start, supervisor Jordi is downstairs at the revolving doors. In a loud voice, he talks to groups of students who are grouping together near the entrance. “Keep your distance, please, people, and walk on upstairs.” The students meekly follow his orders.

The security services at the UU employ one additional employee per day to make the comings and goings of groups of students at exams in De Uithof go smoothly. That supervisor is assisted by students who are employed as corona coordinators; around one for every one hundred people who come to the Educatorium for classes or exams.

Jordi rushes to the exam rooms upstairs, where groups of students are waiting in front of the doors. He’s so busy that he doesn’t have the time to fully instruct student Gijs, who’s coming in for his first shift as coco. Outfitted with a yellow vest, Gijs is sent to the bottom of the stairs going to the second floor.

Kissing couple
After ten minutes, all students are calm, and have walked into their exam room at some distance from each other. Despite the UU’s urgent advice to wear a face mask in crowded places, there are very few face masks to be seen. “But it’s an advice, so we’re not scolding people for not wearing one,” supervisor Jordi says. “It differs per programme how many students wear face masks. At Medicine, for instance, I saw quite a lot of them.”

Next to him, at a safe distance, are the cocos: student of Neuropsychology Bart, and debutant Gijs, who studies Dutch. Does Jordi think he and his cocos are treated with disrespect and insults? “Mwah, they’re still students, of course. So they talk back at you. I just asked a girl and a boy to keep a little more distance. Turned out they were a couple. ‘We’ll be kissing each other outside in a second,’ they said. But yeah, if I were to allow exceptions to the rules, I’ll see entire student houses with similar stories and excuses.”

Jordi hasn’t experienced any nasty incidents, and hasn’t heard anything from his colleagues or cocos either. “Students often haven’t seen each other in a long time, and they have a lot to catch up on. You usually do so by standing close together, so that’s tricky. But they do usually follow our directions.”

Bart has done three shifts as a coco. Although perhaps his yellow vest exudes less authority than Jordi’s security uniform, he hasn’t had any negative experiences either. “You might expect some students to think that the whole corona thing is wildly exaggerated, who start discussions with you, but I haven’t seen any of that either.”

Gijs’ first observation is that people do listen, but only very temporarily. “So they’ll stand slightly farther apart at the start of the stairs when we ask them, but once upstairs, they’re already walking closely together.”

Nasty confrontation
They aren’t very alarming sounds. In the city centre, things are going quite well too, says housing coordinator Fokke Walstijn. He’s heard very few complaints from the six students who work as coco during the week, in the buildings at the Drift and the Israelslaan.

He himself did have an unpleasant confrontation with an employee who refused to leave a room in which only one person was allowed to work. “He thought I was whingeing, but it’s just not allowed, that’s all. In the end, she did leave.” When he worked as coco at an exam for a large group of students in De Uithof, he felt everything went smoothly.

Sending a signal
So what is the UU board basing its email on? We called Eddie Verzendaal, director of the Facilities Service Centre. He’s the one who brought the issue to people’s attention.

Veenendaal says he’s definitely heard some worrying reports through his employees in several buildings. “If students tell a coco ‘It’s none of your business!’ or ‘Do you want me to do a Grapperhaus to you’ (after the minister for Justice who - contrary to the corona rules - hugged his mother in law at his wedding), that crosses the line. Especially when they call someone a nazi, which has also happened. Is this the university we want to be, I think then. That can’t be true, can it?”

The FSC director acknowledges that he only hears the extreme cases, but says that through the UU board, he more than anything wanted to send a signal. “The goal of the cocos is to explain the rules to visitors, but they’re more and more enforcers of the rules. That’s a negative development that doesn’t at all fit in an academic environment. This is something we need to do, together with all our students and employees.”

The director has also noticed that faculties are having a harder time to find cocos. Partially because students and employees are at home themselves more often, but also because no one likes being the bad guy who constantly has to admonish others.

For that reason, the faculties have asked Verzendaal whether it’s possible to centralise the recruitment instead. In the upcoming exam weeks, it’s possible that for large lectures in the Jaarbeurs and Olympos, cocos will be used who don’t study or work at the UU. 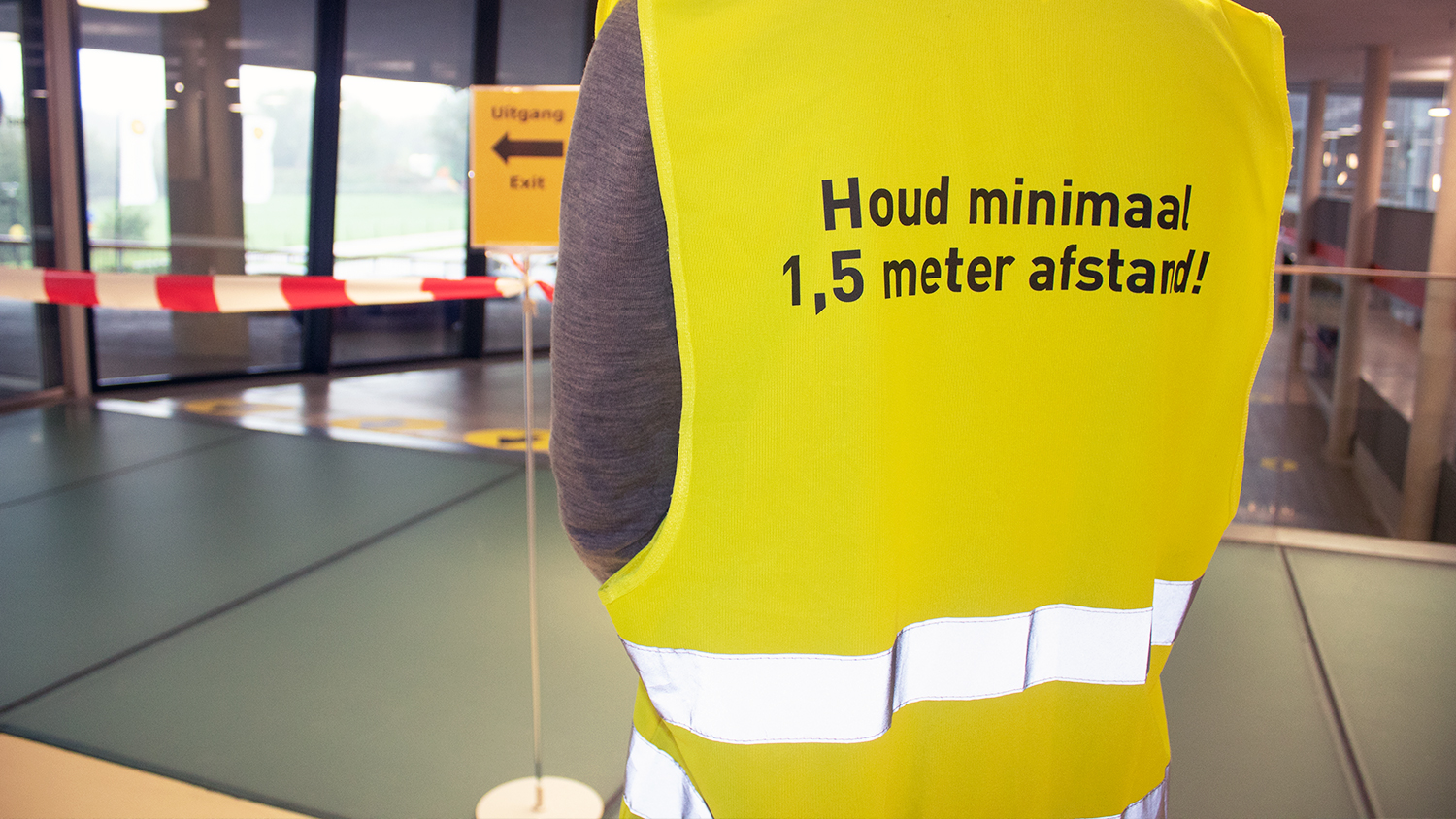 In the hallway of the Educatorium, third-year student Niels is talking to a classmate after their exam. He can imagine that students’ behaviour can cause annoyance among the cocos, and that the job isn’t very popular.

“I work in a restaurant, and we’re constantly having to ask our visitors to keep their distance, and not sit at a table with too many people. And they often try to work their way around the rules anyway, like ‘geesh, do you have to make such a big deal about it?’. It’s already strange that you need people to point out the rules to other people. It’s inexcusable, but apparently this is the way it is.”

But cocos Bart and Gijs still think the job is great. Bart: “I think it’s important to be able to do something for the university. It’s so hard to organise education and exams in these times. I want to help with that.” Gijs: “This way, at least I get to visit the university buildings; otherwise I’d just be sitting at home, studying online.”

Exam stress
The group of students of Natural Sciences & Innovation Management that we see outside after the exams are less and less certain as we keep talking. Perhaps it is imaginable that cocos are verbally harassed, they realise.

These students, too, have their own experiences with jobs at restaurants and such where people don’t want to accept the corona measures. And perhaps the rules are a little strict in the UU buildings? “If you’re stressed for an exam, you might be a little prickly as well, that’s something to consider.”

And are the cocos paid, they ask? “Yes? Then perhaps they should just accept that they’re going to be spoken against, that happens at every desk and reception. I don’t think students come here with the explicit goal of making some yellow-vested person’s day miserable.”

“But hey guys,” one of them counters, “I do think it’s advisable that students just follow the rules; they don’t exist for nothing. And I don’t know how you feel, but I would love for us to go back to regular education as quickly as possible.”