Meeting platform Akwaglot gets a second chance after rough start

The art installation Akwaglot, currently floating in the Singel canal, was supposed to serve as a meeting point connecting the university and the residents of Utrecht but, so far, it hasn’t been very successful in that regard. After being plagued by Covid-related delays, the installation was heavily criticised once it was finally inaugurated. However, initiator Mirko Noordegraaf, Vice-Dean of Societal Impact at the Faculty of Law, Economics & Governance, says the floating platform has already hosted many fun activities. He is optimistic about next year.

“In our Faculty, we're always consciously thinking about how to reaching out the society at large. How can we talk to laypeople about what we are doing at the university?” says Mirko Noordegraaf, Professor of Public Management and Vice-Dean of Societal Impact at the Faculty of Law, Economics & Governance (best known as its Dutch acronym, Rebo). “With that message in the back of our heads, in 2019 we came up with the idea to bring the Skyscraper to Utrecht. It worked really well, so we went looking for a new landmark.”

A huge wale made of discarded plastic items
The Skyscraper is a giant whale made of plastic waste which has been displayed in several cities around the world. It was placed in the canal by TivoliVredenburg in 2019. The decision to bring the famous artwork to Utrecht was a good call, as not only it made for an incredible sight, but it also raised awareness for the problem of plastic waste. The art piece also ignited several meetings where scientists engaged in a debate about plastic waste with residents of Utrecht.

After this huge success, Rebo wanted a follow-up. "So, we got in touch with artists Vibeke Jensen and Santiago De Waele, who were also involved with the Triënnale, in Bruges, making artpieces there.  With Skyscraper, we stepped in at an initiative that was already ongoing, and the whale left for Singapore after its season in Utrecht. This time, we wanted to have our own project, something made specially for Utrecht.”

Water tongue
So, along came the Akwaglot. The name combines the Spanish word agua, meaning water, and the Greek word glot, which means tongue. The wooden art installation was intended as a landmark and a meeting point, a space for connections between the university, the university medical centre, and the city.

According to Noordegraaf, this fits right in with the lustrum plans of Utrecht University and the UMC Utrecht, which celebrate 385 years of existence this year. The project also collaborates with Water Board De Stichtse Rijnlanden and the municipality. Both organisations celebrate their 900th anniversaries in 2022, so Akwaglot can stay in the Singel for two whole years. Afterwards, the artwork will be moved to the Botanical Gardens.

Currently, the application to keep Akwaglot in the Singel in 2022 lies in the hands of the municipality. “The first licence was for 2021 alone, so now we need a new licence for the second phase”, Noordgraaf explains. 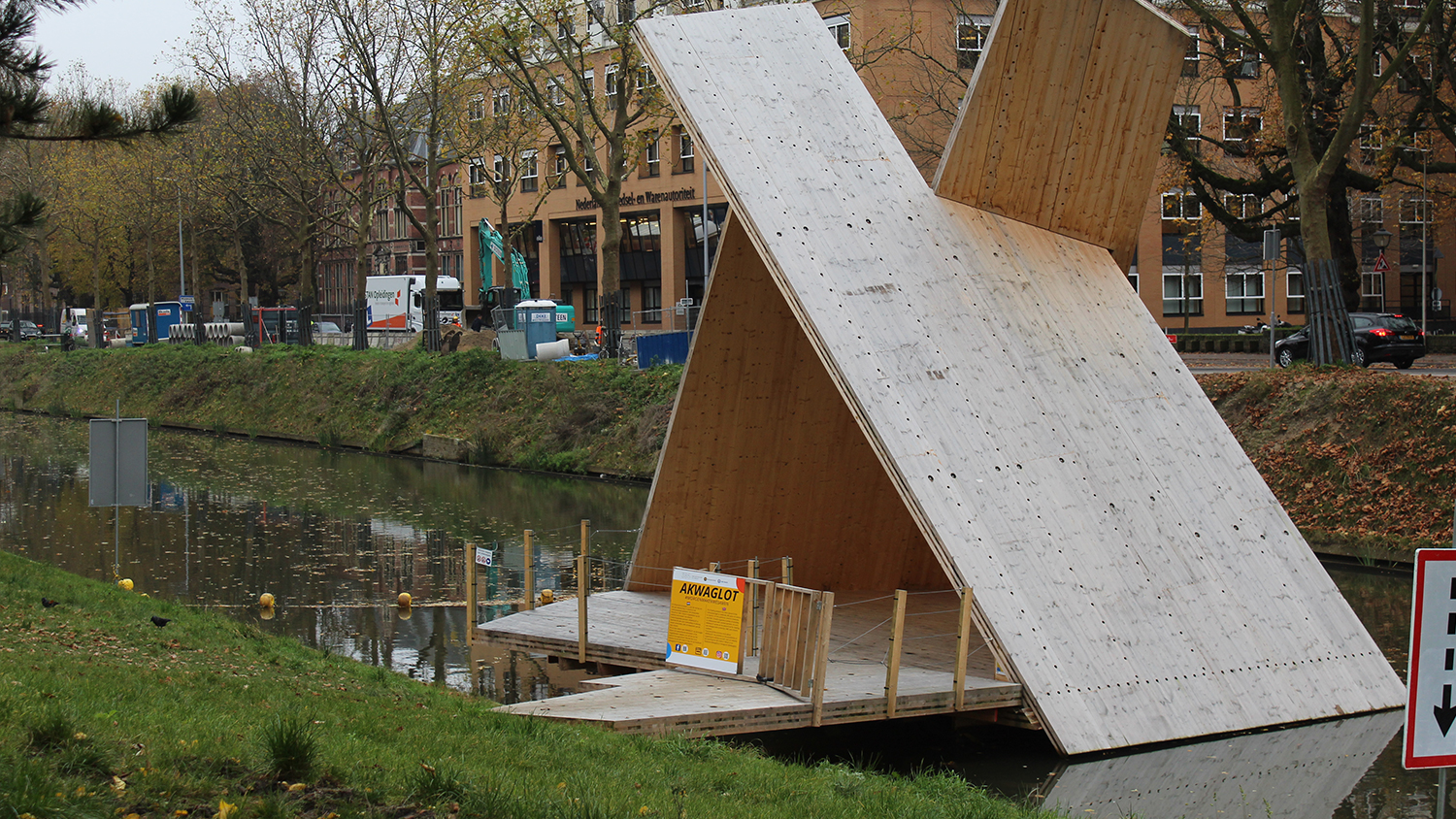 Rubbish
But this turns out to be more than just a formality. The Skyscraper was flooded with compliments, whereas the public opinion about Akwaglot is significantly less favourable. The artwork is heavily criticised on social media. The main complaint voiced by residents of Utrecht is that they find it ugly and way too big for the Singel. Some people even wrote an open letter asking the municipality to "remove that piece of rubbish from the Singel". Additionally, the cost of 100,000 euro is considered too high for what the city actually gets back from the artwork.

Noordegraaf is not bothered by the criticism. “I have the impression that the critique is coming from a specific corner, with the Utrecht-based website Nuk particularly contributing to the backlash. But my experience is different. We have been in touch with entrepreneurs and residents of the neighbourhood and they are all very positive about it. We have also organised community drinks there. I'm aware that the Akwaglot is less ‘cute’ than the Skyscraper. But, back then, we also faced criticism at the start. There’ll always be some tension when you place a big object in a public space. There will always be people who won't like it very much. But that’s also what makes it interesting. Art doesn’t have to be easy, sometimes you have to make an effort.”

No trespassing
About the costs, paid by all partners, Noordegraaf is not so negative. “We collaborate with multiple partners. I see it as an investment in both the short and the long term, as we're bringing people together. Moreover, the artwork will continue to exist.”

The criticism doesn’t only concern the artwork's design. Residents also wonder how effective the platform really is in its goal to bring citizens closer to science. In the first few months after Akwaglot was placed in the singel, the artwork looked a bit abandoned. It had a striking fence stating "no trespassing". After its official inauguration in June, a couple of youngsters jumped the fence to have some beers there, which was met with great enthusiasm from the artists, Jensen and De Waele. “See, this is what we mean. It could be a meeting place for everyone.” The duo assumed the fences would be removed eventually, but that didn’t happen. “That’s because of the licence. The municipality judged that an open platform could lead to unsafe situations. That’s why the fence remains there”, explains Noordegraaf. 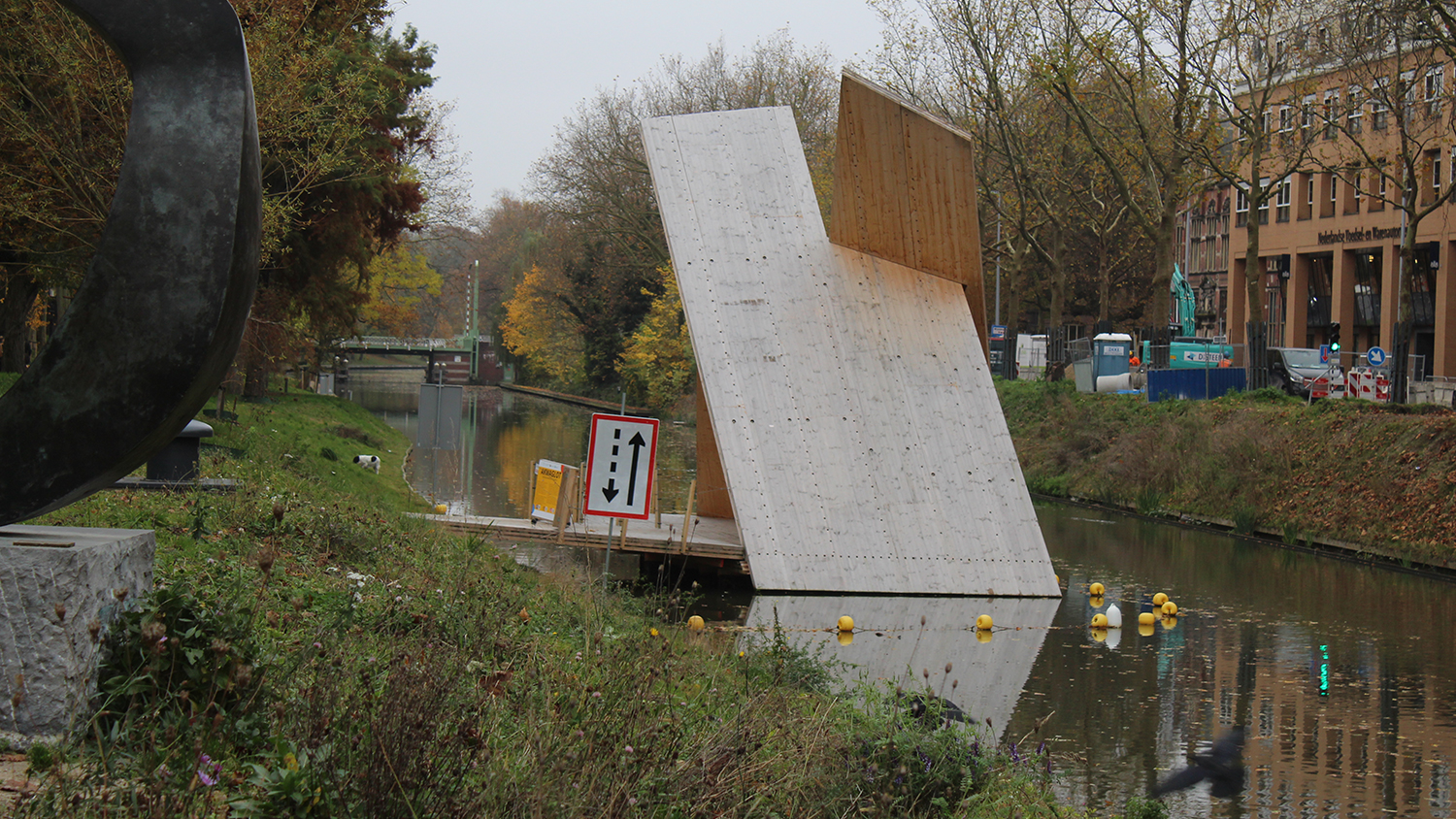 Le Guess Who Festival
Mirko Noordegraaf admits the Akwaglot got off to a rough start. “Because of Covid, the lustrum celebrations haven't really been set in motion. The artwork was installed later than planned and then the summer came, so we couldn’t make as much use of the platform as we wanted to. But things improved after the summer. You must admit that it’s mostly suitable for small activities. Dance and music performances have been taking place there regularly and there was a light show in September which worked really well. Recently, festival Le Guess Who also organised one of its activities on the platform. The Akwaglot is also good for educational activities, conversations in small groups, and even official occasions, with the advantage that passers-by will be involved.”

As an example, he mentions a recent contract signing between his faculty and the law firm Pels Rijcken, which happened here. But the Master's programme European Governance also organised activities there, as did the Utrecht Summer School. According to Noordegraaf, education and research can be put in the spotlight thanks to the artwork. 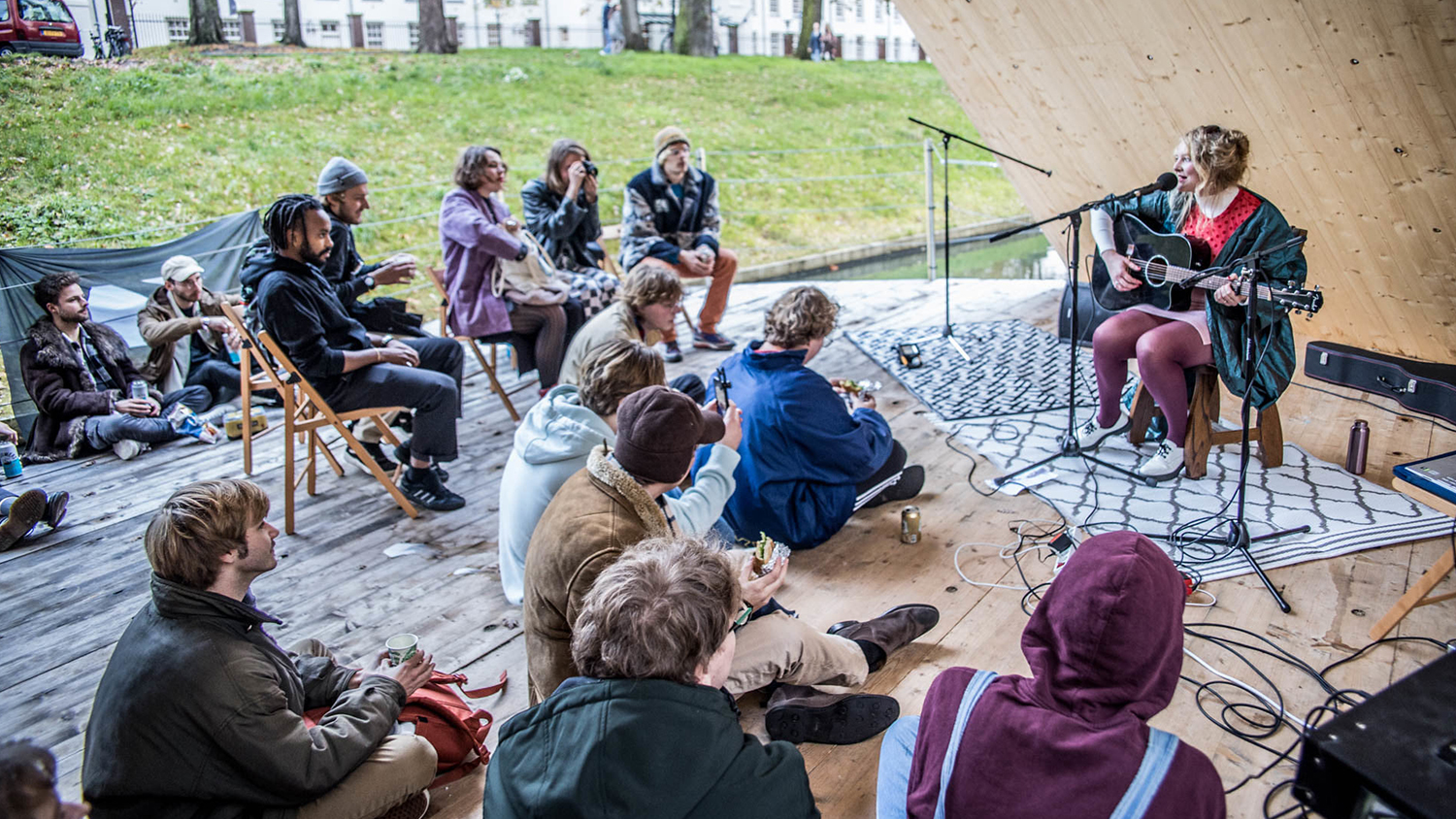 Glotcast
Furthermore, a podcast titled Glotcast is being recorded weekly on the platform. In this podcast, scientists engage in a conversation with citizens about all types of subjects, such as creating affordable neighbourhoods or organising the energy transition in the city. Additionally, groups can apply to organise activities on the platform. “An initiative that I enjoyed very much was the chess afternoon for kids. Kids from the Kanaleneiland neighbourhood came here to learn how to play chess. It was a memorable experience."

Next year, the programme will be organised primarily by the university and the water board. The municipality can also join but will do so less prominently, Noordegraaf expects. Asked whether the wooden structure will be battered throughout the seasons, he says that is out of the question. “The artwork has been made from CLT-wood, which has been used more and more for outdoor constructions. It is future-proof and fits right in our strategic theme Pathways to Sustainability, which is about the city of the future. In light of that, we are working with company Smurfit Kappa, who makes both large and small carton copies of Akwaglot. The smaller copies will be used at schools so that students can envision the city of the future. Hopefully, the artwork will come to life next year and people will be more enthusiastic about the activities that we will organise there.” 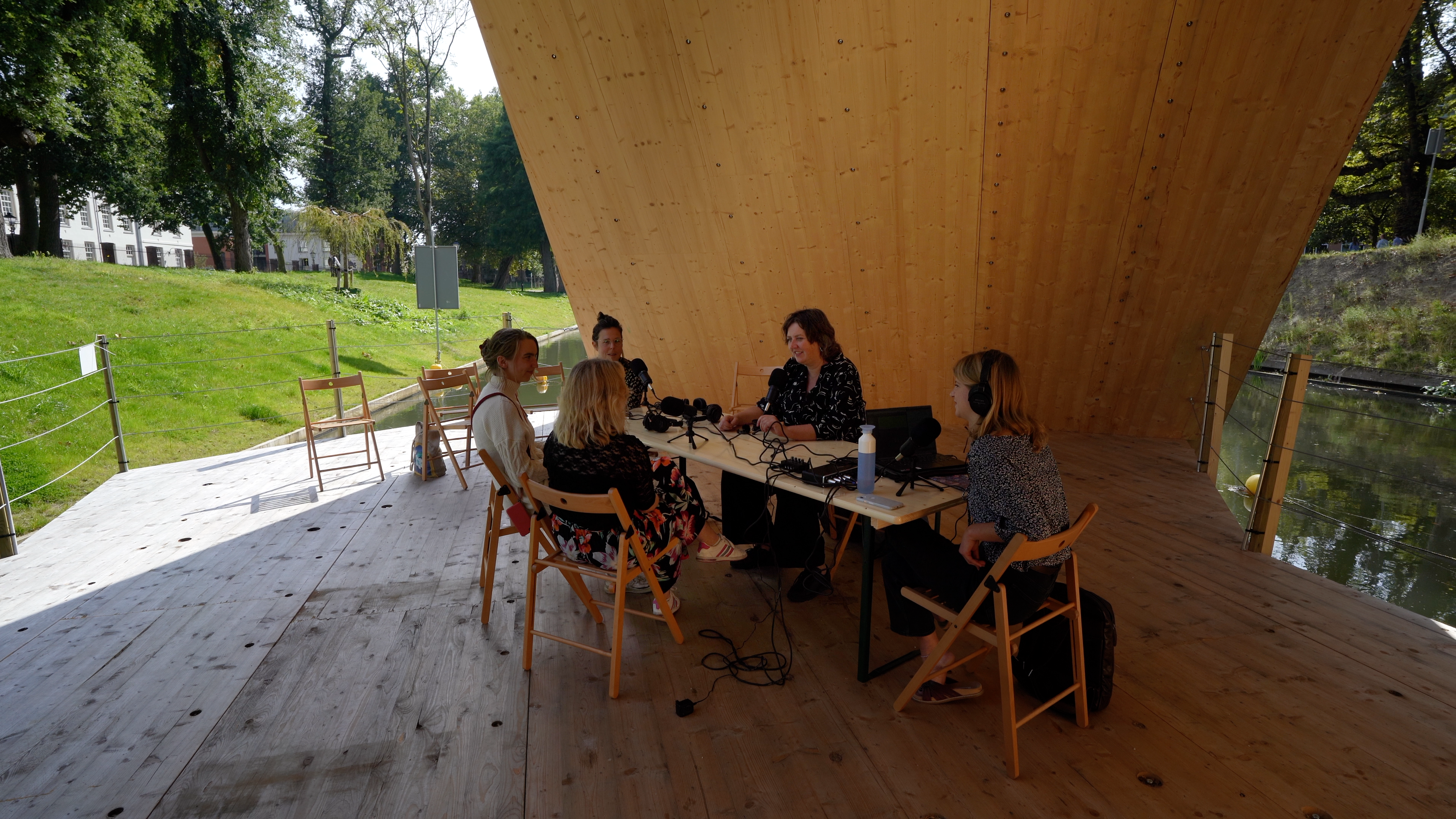