Photo taken by Law student Joost Jansen, who had to leave Parma

On Tuesday morning, UU students who were studying in Italy received the urgent advice to return to the Netherlands. The outbreak of the corona virus has also led to the UU recommending students from the Dutch province Brabant who are experiencing any symptoms of illness to stay home. Employees from Brabant, with or without flu symptoms, can work from home. Advice to all employees: take your laptop home with you.

Now that the Italian government has announced it would expand its emergency measures for the corona outbreak to the entire country, Utrecht University is urging the 31 UU exchange students in Italy to return. UU students taking courses at Italian universities were advised on Tuesday to leave.

Three UU students, who’d been studying at the universities of Milan and Padua in Northern Italy, had previously been advised by the university to leave the country, which they did.

No apocalypse
The level of chaos is proven by the contact DUB had with History student Ellen Linderhof on Tuesday afternoon. She started her courses at the University of Bologna in February, with the plan of returning to the Netherlands in the summer.

In a first phone call Tuesday afternoon, she explained her hesitations about whether to follow the UU’s advice or not. “I’ve made some friends here,” she said. “You do see the streets getting quieter, but it’s not like the zombie apocalypse has started.”

She was also still able to take her classes, albeit online. She’d sublet her room in Utrecht. “On top of that, I don’t know how the situation in the Netherlands will progress. What if I go back to the Netherlands for a bit, want to go back to Bologna, and I can’t?”

An hour later, the situation has changed completely. Ellen calls DUB and says she’s heard Ryanair will stop flying to and from Bologna starting this weekend. Ellen fears other airlines will follow this example. “In that case, it would be irresponsible to stay here. If something were to happen in the Netherlands, I wouldn’t be able to go back.” Ellen will take the plane back home on Thursday. 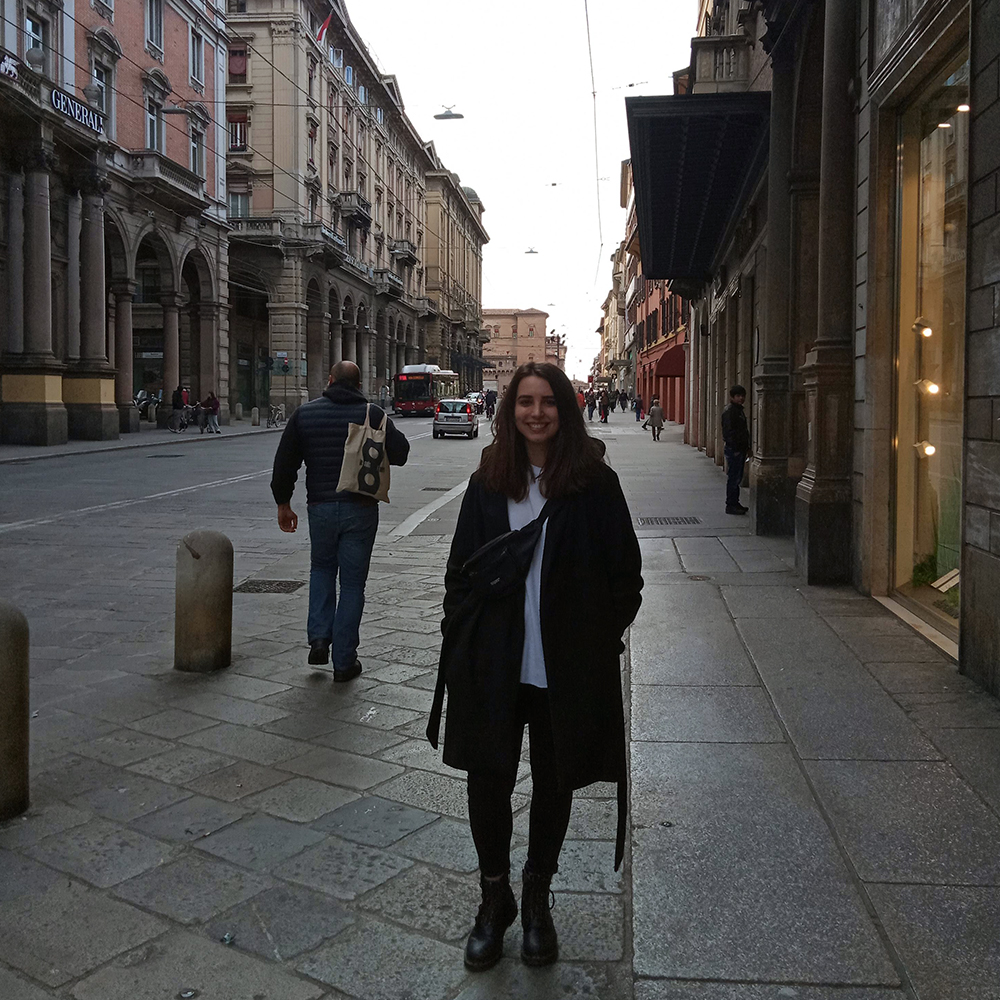 History student Ellen Linderhof during one of her last days in Bologna, her own photo.

Oral exam online
Law student Joost Jansen has also been studying in Italy since early February, at the university of Parma. He decided on Monday to go home. He’s now home alone, in self-imposed quarantine. “It’s not that I’m a risk, I feel fine. But I want to be sure.”

Joost’s classes were also mostly online these past two weeks. It wasn’t until last weekend that he decided he’d rather not stay. “I noticed that the unrest amongst students was increasing. And there was no fun to be had at all. The streets were empty and people were advised to stay home as much as possible.”

Joost isn’t sure what to do now. Missing out on credits isn’t the biggest disaster, as he’s already obtained enough ECTS to graduate in Utrecht. For now, he’ll focus on his Italian exam that he has to take next Monday: an oral exam, to be taken online, with his teacher in Parma. 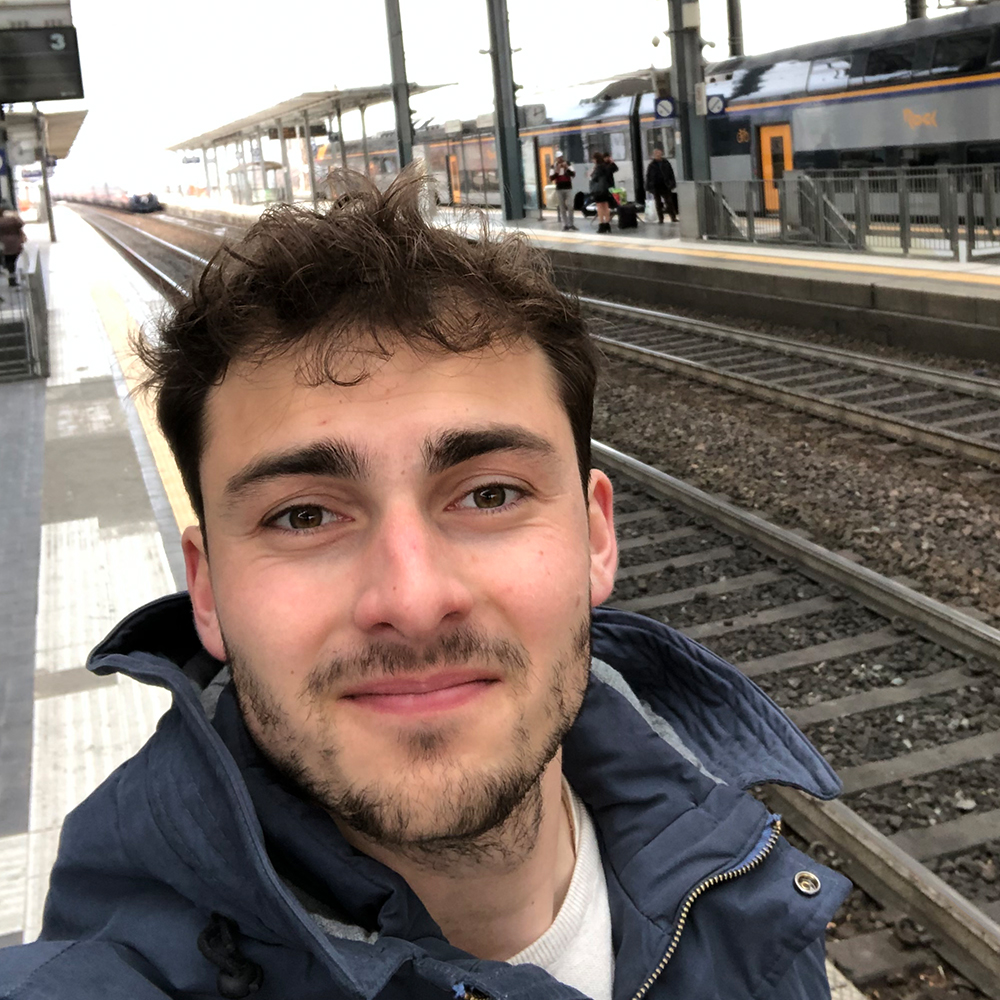 Selfie of Law student Joost Jansen, who took the train on Monday to fly home from Milan.

Take your laptop home with you
In an email sent to all UU students and employees on Tuesday, the university says it would rather not have anyone travel to Italy in the near future. Guests from Italy are also requested not to come to Utrecht for now.

The UU also follows the government’s advice and asks employees living in Brabant to work from home as much as possible. All employees, whether from Brabant or not, are also advised to take their laptops home with them every day. Just in case.

Students, for now, are expected to keep coming to class. The UU had previously stated this in an email on Sunday evening. Students from Brabant who feel ill can stay home. If they miss class or an exam for which attendance is required, they need to call or email the Student Desk.

By Monday morning, several students had already done just that, DUB learned. The study point at the faculty of Science received six phone calls and emails from students who mostly experienced symptoms of the common cold. At Humanities (eight phone calls) and Geosciences (ten reports, mostly emails), students also checked in with questions and sick reports.

Since Sunday, employees from Brabant who don’t feel well have been advised to stay home. DUB’s since learned that at the moment, it’s impossible to say whether the number of employees calling in sick is increasing. Last week, at least, this didn’t seem to be the case.

Finally, prime minister Rutte’s advice not to shake hands has been implemented at the UU for a week already. Winners of the Teacher Awards at the Education Parade last Thursday, for instance, had to forgo shaking hands or kissing.

Follow UU Updates on the measures relating to the Coronavirus here.