How would you like to have more sports fields at Olympos? Or an additional building in the Utrecht Science Park? Does the idea of having exclusively hybrid lectures appeal to you? Or perhaps you&#39;d like to see more gender-neutral toilets? DUB asked party leaders Lune de Rijck (Lijst Vuur) and Maud Duurkens (PvdUS) what they want to change on behalf of UU’s students.

Statement #1: PvdUS and Lijst Vuur have such similar programmes that it would be better to merge the two parties.

Maud: “It’s important that our parties continue to exist independently as students have more choice that way, not to mention more students will be represented in the University Council. Our party emphasises student life and student associations in particular, while Vuur is more focused on study associations. PvdUS finds it important that students get to do fun, relaxing things together in addition to obtaining their credits and building the best resume possible. In general, working toward their CV makes students feel more pressured to study and perform. The university can help relieve this pressure. That’s what we’re committed to.”

Lune: “Although our programmes have overlapping topics, Lijst Vuur and PvdUS are fundamentally different. Lijst Vuur focuses on inclusion, diversity, internationalisation, and sustainability. We also find that the university should be a place where students feel safe. We believe that students flourish at the university not only as academics but also as human beings."

Maud Duurkens (21) is the party leader for Partij van de Utrechtse Student (the Party of the Utrecht-based Student or PvdUS). She is a third-year Bachelor's student of Science & Business Management and a member of the student association UVSV, in addition to playing hockey in the hockey club Voordaan. As a student, she's realised how important it is that students don't spend their college years only thinking about studying, but also experiencing all other aspects of student life. That way, they can grow. Next year, Maud will be campaigning for "flex study" and improved student welfare. She also wants to strengthen the ties between the university and student associations.

Statement #2: The university should actively encourage students to be physically present in class to avoid half-empty lecture halls.

Lune: "Face-to-face classes make students feel more connected to the university. In addition, it leads to better discussions than the ones obtained during Google Meet sessions, which is what we had during the pandemic. We've also noticed that students seem to be less and less interested in having classes on campus. Lijst Vuur regrets the fact that lecture halls are half empty but there’s a reason behind that. Some students are not happy about the quality of the lectures they're getting face to face. The university has to work on that. Other students prefer studying online at home. Education needs to be provided in other ways, the university should explore the options. Vuur thinks that every student should be able to study in the way that suits them.”

Maud: “The fact that fewer students are physically present in class should not be a problem, as long as there are suitable alternatives such as hybrid education. PvdUS is against making classes mandatory since this only demotivates students. Lectures are often nothing but long monologues. Knowledge clips would be a more efficient way to organise lectures, for example. Face-to-face workgroups are more educational as students get to engage with each other in smaller groups and delve deeper into the material. Teachers and students can get to know each other better that way as well.” 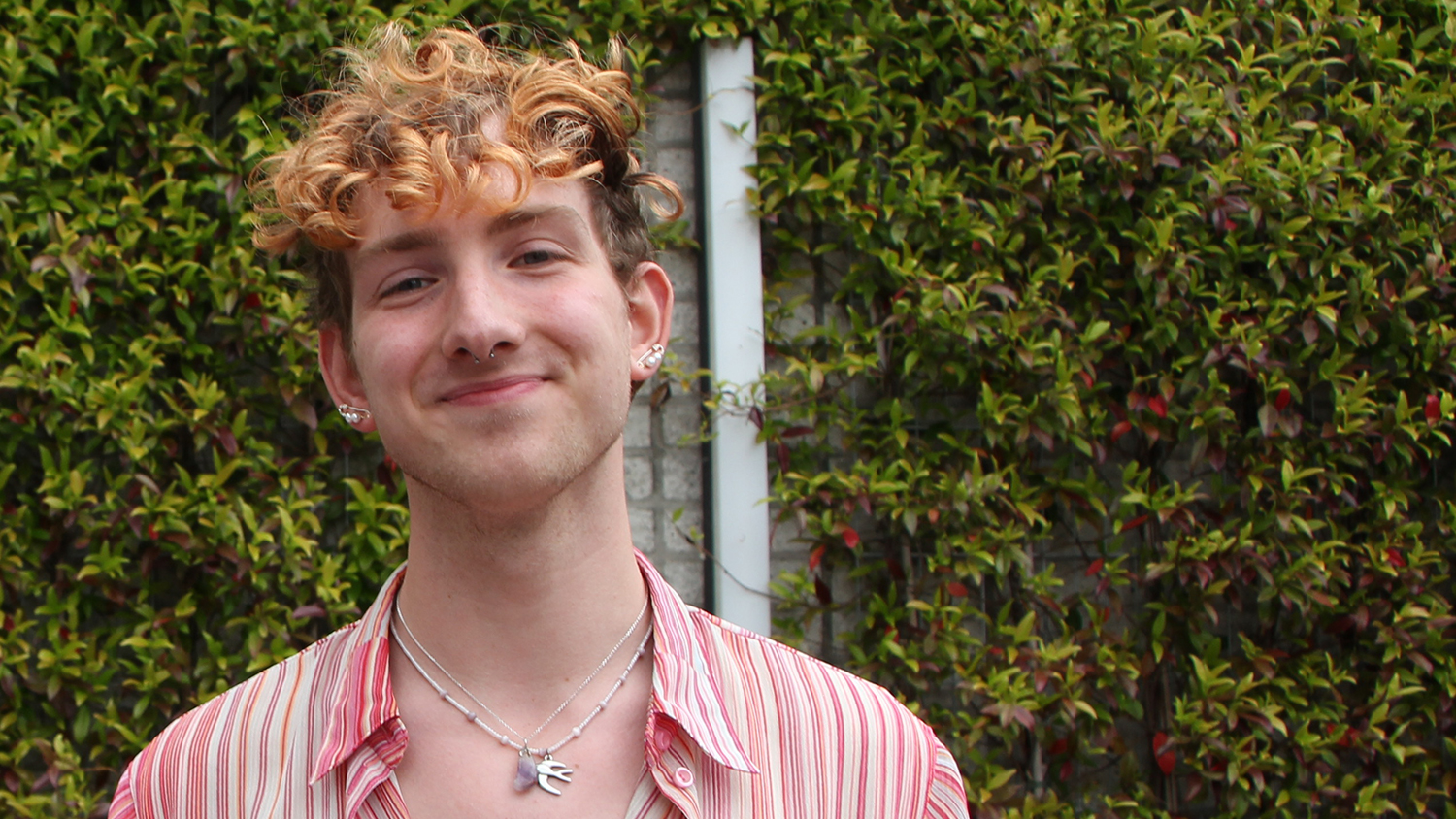 Lune de Rijck (18) is Lijst Vuur's party leader. A first-year student in Philosophy, Politics & Economics, Lune is a member of the study association Metis. This nature lover is nursing no less than fifty plants in a 20 square-metre room which is also shared with a cat, Keisha. Lune is queer and non-binary and thinks that the university could improve a lot with regard to that topic. Inclusion, internationalisation, and sustainability are topics close to their heart. In the University Council, Lune wants to push for more gender-neutral toilets and make it easier for students to change their personal pronouns.

How to make sure that online education does not worsen students' mental health and wellbeing?

Maud: “By focusing more on face-to-face workgroups. This is the place where students are in touch with their teachers and classmates and personal contact is much too limited in the biggest study programmes. For example, we’ve been noticing that first-year students are not meeting enough people because of their studies anymore. In addition, students get more opportunities to relax and have fun when they can follow classes online or study in a flexible manner.”

Lune: “Although classes might be less personal than workgroups — depending on the scale of the class, of course — the student is still attending a university, listening to the teacher and therefore learning. So we do not find classes on campus unnecessary. In addition, Vuur wants to turn the Utrecht Science Park into a hub with more hospitality venues, a bigger supermarket, and several other facilities. It should become a place where students can also expand their network.”

Statement #3: More money for students to practice sports should not come at the expense of money spent on education

Maud: “The university has a considerable budget, so PvdUS thinks that more money should be going to the sports clubs. However, this should not come at the expense of education. Practising sports is also a moment when you meet other students and have fun together. Currently, sports clubs often have to turn people down because they cannot welcome any more members. PvdUS feels that UU should invest more money in facilities such as more fields at Olympos. They could arrange for hockey and tennis fields, for example.”

Lune: “Lijst Vuur agrees that additional investments in sports facilities should not come at the expense of investments in education. We plead for better cooperation between the university and Olympos, Mesa Cosa, and the municipality. UU should join forces with other educational institutions to lobby more actively with the municipality so that sports become an important part of the agenda for students. In addition, Olympos should be able to expand because there’s a high demand for sports. Lastly, more workshops should be given, including multilingual workshops, to encourage students to try out a new sport.”

The university has little say on the associations best known as Shot (SPIN, Histos, Orca, and Triton). What are your ideas?

Maud: “PvdUS thinks that the university should not only invest in more space, but also in quality. For example, they could do that by investing in top sports so we’ll have an excellent selection team.”

Lune: “But by making it more selective, you're contradicting your first argument that more students should be able to play sports."

Maud: “The university should invest in more space anyway. Furthermore, associations should be able to determine for themselves what they would like to invest more money in. They could offer subscriptions at a lower price to get more members, for example. Or invest in a better selection team.”

Statement #4: The internationalisation of the university has gone too far. There are too many international students

Maud: “PvdUS and Lijst Vuur disagree about this. We find the lecture hall shortage highly problematic, especially considering the number of university students just keeps on growing. PvdUS does not consider internationalisation a bad thing but we do want to reject international students until more programmes define a fixed number of students. In such a situation, Dutch students should be given priority.”

Lune: “Do you have examples of study programmes that are at risk of setting a limit to the number of students because of an increase in the number of international students?”

Maud: “No, but this is less of a problem for Dutch-taught programmes because they attract fewer international students."

Lune: “We do have a stronger international base compared to a few years back, but the university also expanded the offer of English-taught programmes. Actually, both in Dutch and in English. Vuur must admit that the university is filling up, but we find that excluding international students will really harm the quality of education and reduce inclusion and diversity. After all, we learn a lot from this group of students and internationalisation prepares us for a globalised society."

What is your party's take on the anglicisation of Dutch education?

Maud: “PvdUS is in favour of maintaining the Dutch language because it’s so important in the labour market. We would like the university to offer Dutch courses to international students".

Lune: “Because of globalisation, English is becoming more and more important. The Western world communicates in English. That’s why Lijst Vuur finds it important that study programmes are offered in English as well. This gives Dutch students a chance to improve their English.”

Maud: “It’s not that PvdUS is against English-taught education, we just assume that we are in essence a Dutch university. English literature is valuable but, apart from that, assignments and exams should be in Dutch. It's important to have good writing skills in Dutch. In addition, students already have a basic level of English. If they have the ambition to have an international career or look for a job in another country, there are many possibilities to do so. They can go after it themselves."