From PhD cadidate to Holland’s best 'Ironman': athlete instead of surgeon

This past November, in the Senate Hall of the University Hall, medicine PhD candidate Els Visser endured an hour filled with questions before finally hearing those sweet words of salvation: after four years of hard work, she’s finally able to call herself a doctor. She will not become a scientist, however. The 29-year-old will focus full-time on the toughest triathlon: the Ironman.

Not long after her PhD ceremony, the fresh Groningen-born doctor stood in the cold of the Austrian town of Lech. Because Els isn’t just a recent doctor of Medicine: she’s also Holland’s fastest woman in the Ironman Hawaii competition of 2019 – with a time of 9 hours, 18 minutes, and 42 seconds, she ranked sixteenth in this incredibly heavy race, in which participants cycle 180 kilometres, run a marathon, and swim for nearly four kilometres.

Around ten years ago, this version of Els Visser was pretty much non-existent. In fact: she was, in almost everything, the polar opposite of her current self: she’d just started her studies in Utrecht, and fully enjoyed studying and student life. Her fascination with the human body led her to choose medicine, with a dream of one day becoming a surgeon. She also joined student association UVSV, the start of ‘a very intense student life’. “I lived in an association home, and to me, the association was just as important as my studies. And after my Bachelor’s, I did a year as secretary of the board.” She barely exercised, in contrast with her youth. Some jogging every now and then, to stay in shape.

Now, her life almost exclusively consists of training, training, and more training. If a qualification race is coming up, it’s no exception for her to train 25 hours a week. Every year, she spends three months in Australia and three months in Switzerland with her team, and for races, she travels all over the world. Through her website, Facebook, and Instagram, she keeps her fans posted of her training sessions and races almost daily. She rarely, if ever, bikes in and around Utrecht anymore; when she’s in the city, she mostly trains indoors.

Shipwrecked on a deserted island
The turnaround comes after a tragic event in August 2014. Along with twenty others, Els Visser floats on a life raft in the Flores sea near Indonesia. Her tourist boat, which had been on its way to the Komodo islands, had sunk somewhere near the volcanic island of Sangeang due to heavy weather. The small boat hadn’t had any GPS beacon or navigation system on board. No one on land would know the ship had perished, and the survivors had no idea which direction they were floating to. On top of that, the life raft was too small to fit all the people on board, which meant they took turns hanging on to the raft while in the water.

After a cold night, Els and four others decide to risk it, and swim to an island they could see in the distance. After an exhausting eight hours of swimming, she and a woman from a New Zealand reached the island’s coast – but that didn’t mean the end of the danger. The island was rocky, and deserted. By drinking their own urine, the two women managed to survive until they were noticed by a fishing boat. They were rescued a day later. The three other swimmers also survived: they’d ended up on a different part of the same island. The Coast Guard set up a rescue mission to find the other survivors of the shipwreck. For two of them, help came too late: they were never found.

Her shipwreck meant Els made headlines around the world for some time, and she was in all newspapers in the Netherlands. The story of her survival is still used eagerly by the media. An NRC headline in August 2019, for instance, read ‘Els swam in the ocean for eight hours after being shipwrecked. Now, she’s a professional triathlete’. She’s rather over that by now, and would prefer to talk about her sport instead.

But there’s no denying that her shipwreck is part of the reason she fell in love with triathlons. After the shipwreck, she started exercising more often to clear her head. When friends did a sprinting triathlon, she became interested in trying that. Her hours in the ocean did not cause a fear of water for her. In this first race, she won first place, despite setbacks like not being able to find her bicycle.

Talent for the sport
That first race made her eager for more. Through word of mouth, she heard about Ironman races. She signed up for the Ironman in Zurich, in 2017, joined the Utrecht-based triathlon association Hellas, and started her training with help of a coach.

In her very first Ironman race, she placed fourth, right along professional athletes. That was reason enough to choose to focus on the sport exclusively, and put her career as a doctor on hold for now. “That race went so well, even though I hadn’t had much preparation,” she reflects. “Others said I had a talent for the sport. So I decided: I’ll just go for it, see how it goes. I didn’t want to regret not doing it.”

Although her friends supported her, people around her were still surprised. “The university and my mentors did think it was a rather odd choice,” Els laughs. But she’d made her decision. “What they felt about it was irrelevant; I was just going to do it.” Still, she didn’t want to give up her PhD track – a promising step towards a career as a surgeon – so aside from her heavy training schedule of three training sessions a day, she continued her work on the treatment of oesophageal cancer. That meant getting up at 5 am, work on her PhD until it was time for the first training session, and then working for a few more hours in a coffee shop. Sometimes, if she wasn’t exhausted from training, she’d even put in some more time in the evenings.

Her research was no small feat: for four years, she conducted elaborate research in both practice and literature on the effects of different treatments and treatment moments on the survival chances of oesophageal cancer patients. Some cohort studies had more than 3,500 patients – a painstaking, monumental work to go through. Oesophageal cancer is hard to treat. In 2010, less than 20 percent survived. Even now, despite improved treatments, only half of all patients who’ve had an oesophagus surgery are still alive five years later. Els discovered, among other things, that in certain sub-types, genetic differences in the cancer cells influence the patient’s survival chance. 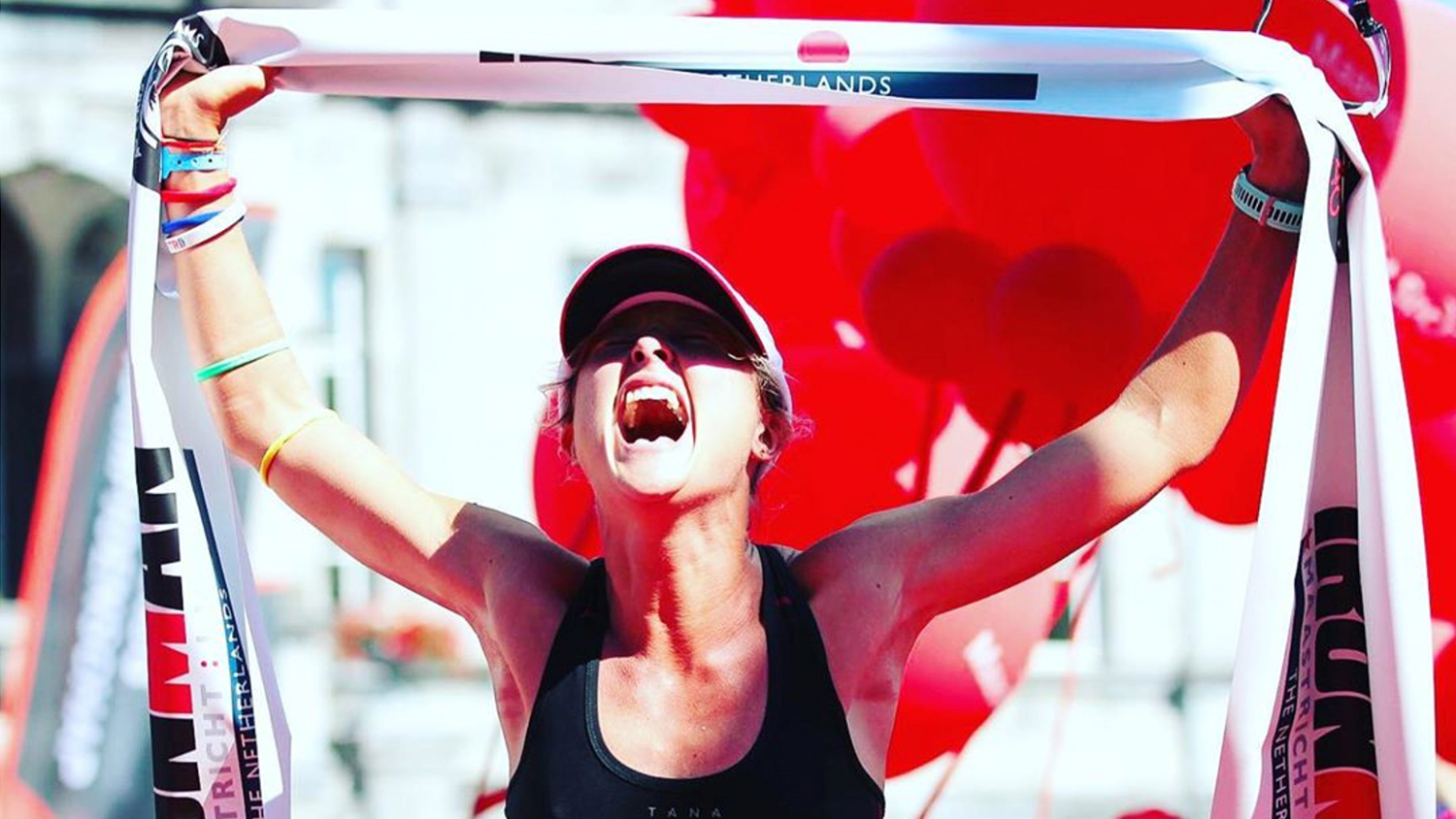 Back to basics
Even though Els spent years working towards a career as a surgeon, she won’t take that last step. She has no regrets at all. She sounds almost dreamy, when she talks about the triathlon’s charms. “It’s that combination of three sports you have to be so incredibly good at,” she says. “And it’s a sport with no technology, no tools, a sport in which you go back to basics, really. During the races, you’re all you’ve got, and every race is different. I still really enjoy training sessions, I participate in races in all kinds of locations all over the world, meet new people, and am outdoors a lot.”

Plus, her star is on the rise. After placing first in 2018 during the Maastricht Ironman, she then became the fastest Dutch woman in the Hawaii Ironman, placing sixteenth in what’s seen as the ultimate triathlon race. Just like in Maastricht, she looked remarkably fresh at the finish – especially when you take into consideration that she’s only really been an athlete for two years. What’s her secret?

“I do get completely exhausted sometimes, you know” she says. “Other times, I’ll feel as though I could easily run another 10 kilometres.” But she acknowledges that she does seem to have a talent for the sport. “I think it’s partially in my genes, in my body type. My body can endure a lot, and doesn’t easily get injured.” Another part of it, however, is in hear psyche, in the way she works with her Australian trainer. “You have to be incredibly patient in the Ironman. We train on instinct a lot, without complicated calculations. We also try to find my boundaries during training sessions, so I won’t cross them during a race.” But it’s her personality, too. “I am always a goal-getter. That was the case in my studies, but here as well.”

Into the deep end
Having had an ‘intense’ few years as a student, unlike many other professional athletes, is an advantage, she says. “I think studying makes me a better athlete. A lot of athletes start out at a young age, but I developed myself as a person during my studies. You learn how to lead, to organise. About 40 percent of an Ironman is in your mind. You need to be resilient. It helps if you know other worlds.”

With that mindset, and her story, she wants to inspire others. “Dive into the deep end! We can do so much more than we think. When we talk about reaching our goals and being successful, there are often so many excuses not to do it. But if you don’t try it, it’ll always be impossible. To me, the most important thing was believing in myself. People around me did think ‘what kind of a choice is this?’ at first, but I didn’t let that stop me.”

Now that she’s got that long-desired doctorate in her pocket, it’s time to look at what comes next. “I do want to relax for a few months,” she says. “It was so intense, doing that research next to my sport, it was really, truly, heavy.” One thing that’s for sure is that for now, her sport will be the main priority in her life. And another: that she wants to participate in the Ironman Hawaii in 2020, to improve on last year’s time. “In this sport, I’m still one of the younger ones, so I can keep doing this for a few more years.”

Although she now earns her money as a professional athlete and speaker, she won’t leave medicine entirely. She wants to use her sport to promote an active, healthy way of life. “That fascination for the human body and health care is still there,” she says. “But with prevention and inspiration, I can help more people than that one patient on the table when you’re a surgeon – by then, it’s already too late, really.”