A safe home for the smallest helpers in health care

The test animals Billie Savage adopted. The photos in this story were provided by the interviewees.

Sometimes, test animals become redundant at Utrecht University and UMC Utrecht. Where once, most rats and mice that are no longer needed for experiments or training died, there is now an alternative. The smallest heroes of health care are put up for adoption – and people are interested.

Although Utrecht University and the UMC have been trying to reduce the number of test animals, the two institutions still use a combined 19,000 to 20,000 test animals per year (annual report 2018). In most cases, the animals are euthanised after the experiments, so the researchers can study the effects the experiments had on their bodies.

But what happens when experiments are called off, or the mice don’t have the right characteristics for an experiment? Up to now, that still meant certain death. But thanks to a trial project run by the UU and the UMC, these little health care heroes have a chance at a future, through adoption

Why do we have cats, dogs, and even pigs adopted, but no rats or mice?

Adopting test animals has been common for larger animals such as dogs, cats, guinea pigs, and bunnies, but not for smaller rodents. This is partially because the types of experiments that rats and mice are used for are different than those that larger pets play a role in, says Wim de Leeuw, head of the Animal Welfare Body of Utrecht University and the UMC Utrecht. “Larger animals are used at the UU to train Veterinary Medicine students in handling animals in a clinic, for instance,” he explains. “So they’re not used for experiments.” Mice and rats, on the other hand, are usually used in pre-clinical trials and fundamental research, for instance studying what a certain disease or treatment does with a test animal’s body.

According to the law on animal testing, the Animal Welfare Body has to oversee the welfare of animals that are used in education and research at Utrecht University and the UMC Utrecht, and advise on how to improve their welfare. The initiative of putting smaller rodents up for adoption, came from the same body. “A year ago, we had an internal discussion,” De Leeuw says. “Why do we have cats, dogs, and even pigs adopted, but no rats or mice? By law, all animals are treated equally. Rats and mice have different roles in society, but can be great fun as pets. And the alternative is euthanasia. So we wanted to try this.”

To get this done, the Body consulted with Animal Rights, Animal Protection Service, rodent rescue Het Knagertje, and the pet adoption agency Stichting Hulp and Herplaatsing Huisdieren. Not their natural allies, De Leeuw says. “Animal rights activists usually aren’t big fans of institutions that work with test animals, and scientists are sometimes a little wary of working with activists. But now, we had a shared goal,” De Leeuw explains.

The animal has to have a reasonable life expectancy

There were some bumps in the road to that goal. First of all, the number of small rodents at the university is far greater than the number of dogs and cats. And many mice and rats can’t be safely adopted after the experiments. And how does the Animal Welfare Body find suitable pet owners? And do ex-lab animals even want human housemates? Moreover, the adoption process takes a lot of administration and manpower, which not everyone was happy about.

De Leeuw explains why not all mice and rats are suitable for adoption after a life as a test animal. “The animal has to be healthy, with a reasonable life expectancy, it cannot pose a threat to the environment, and it has to be used to people.” Furthermore, they cannot be genetically modified. Because of this, the majority of test animals that are still alive after the experiments are not eligible for adoption. But animals that are used to train upcoming lab technicians in how to handle test animals, for example, are. Animals that are left over from breeding, or those that were bred for experiments that were cancelled, are also eligible for adoption. The future pet owners don’t have to fear adopting a traumatised animal – as is sometimes the case with larger pets. “The animals are used to being touched, and we only select animals that show normal behaviour.”

The organisers take great care in selecting a new owner. Each applicant comes in for an interview, and if the adoption process is done via Het Knagertje, the organisation asks a small fee for each adopted mouse or rat, to prevent impulse purchases. “Or to prevent someone from using them to feed a snake, for instance,” De Leeuw says. Furthermore, the animals stay in the groups they’re familiar with as much as possible, and with mice, only the females are up for adoption. “Males can be aggressive to each other,” De Leeuw explains. The adopters also receive an information package, entirely medically justified

I don’t see them as pets, but as animals that need a home

So far, around a hundred and fifty mice and ten rats have found a new home via this trial. The new owners are mainly animal rights activists, who were found via Animal Rights’ network. 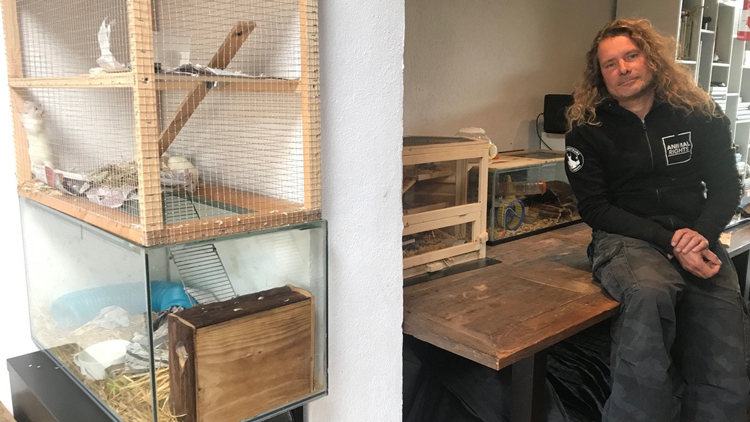 One of them is Erwin Vermeulen, campaign leader for Animal Rights. With his partner, he’s adopted ten ex breeder mice, and four rats, who now live in a large cage. The animals live in a separate room, so they’re not bothered by the four dogs and four cats that also reside in Erwin’s house. “I don’t see them as pets, I see them as animals that need a home,” Erwin says. “I only deal with them when the cage has to be cleaned.” He keeps the mice in a veritable palace – a wooden cage with three storeys, bridges, a system of pipes, a wheel, and toilet rolls to play with. “They’re a lot of fun to look at. They’re doing well, although the rats did need some time to acclimate.” There’s nothing to show for their previous lives in laboratories. “They jut have a little bite out of their ears as an ear tag, and the rats have rings on their tails.”

Amsterdam-based yoga teacher Billie Savage also adopted ten mice. For her, adopting test animals was a logical decision. “I’m already quite active as volunteer for several causes,” she says. “But adopting these mice is a lot more concrete. You make a difference in ten individual lives.” The mice now live in a tank of over a metre long, where they’re regularly provided with new toys. “Mice aren’t my best friends like a cat can be, but I love watching them. I can now tell them apart, even if not everyone believes that. And they eat more or less the same as I do, which is very convenient.” Savage dreams of establishing a micro-shelter for all kinds of animals.

They’re highly intelligent animals, and you quickly bond with them 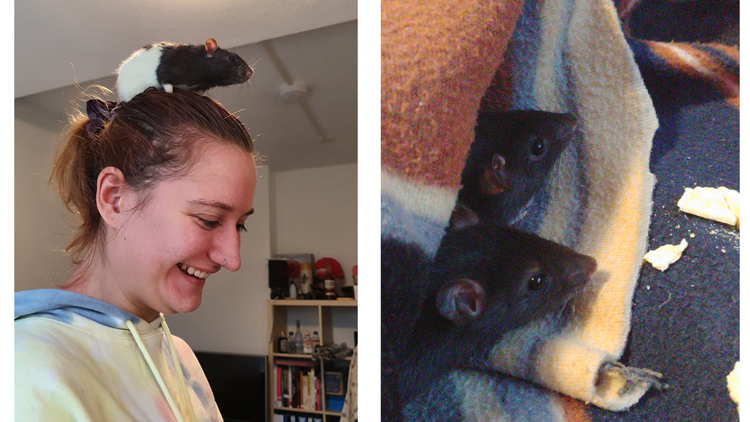 Groningen student Manon Verheem was modest in her adoption. In November, she became the proud new roommate of two rats: Koe and Poes. “I’d been wanting to get pets for a while,” she says. “But there aren’t many options in my student house.” Rats, however, were allowed. Her father told her about the initiative set up by the Animal Welfare Body in Utrecht. After convincing her housemates, the two rats moved up north. “They live in a cage that’s a metre and a half tall, about as tall as me,” Manon laughs. “They’re highly intelligent pets, and you quickly bond with them. They do have completely different characters. One always wants to come with you and wants to explore everything, the other is much calmer.” She consciously chose to adopt former test animals, and also took their past into account. “You have to take it easy with them at first. I left them in their cage, but did initiate contact every day.”

Every life is a life

The Body wants to expand its adoption programme in the coming months. The final goal of the adoption process is to not only find new homes for mice and rats, but also to ensure researchers handle their test animals more responsibly. “Every life is a life,” Wim de Leeuw says. “This project also gives us a better view of where surpluses exist and how we can prevent them. We encourage the re-use of animals, or, where that’s not possible, adoption. We also hope that organoids – mini organs – can replace some parts of the research processes, which means we can test on humans earlier, and we need fewer test animals.”