Safe from A to the Utrecht Science Park

A rushing professor on a super-fast bike, a student who is not quite awake yet and tens of thousands of other cyclists make their way to the Utrecht Science Park in the morning. The bike paths are overcrowded and sometimes this can lead to unsafe situations. Are there any changes to come? And what tips are there for getting to class safely?

Cyclists who ride side by side with the three of them and require the full width of a bike path, people who cycle through red, scooters that suddenly turn up, a hurried father with a cargo bike full of children, a slow loiterer, a cyclist with more attention for his phone than the road: everyone tries to get to the USP, but you have to pay attention. Isn’t it possible to do this with a lot less hassle? DUB went looking for tips. 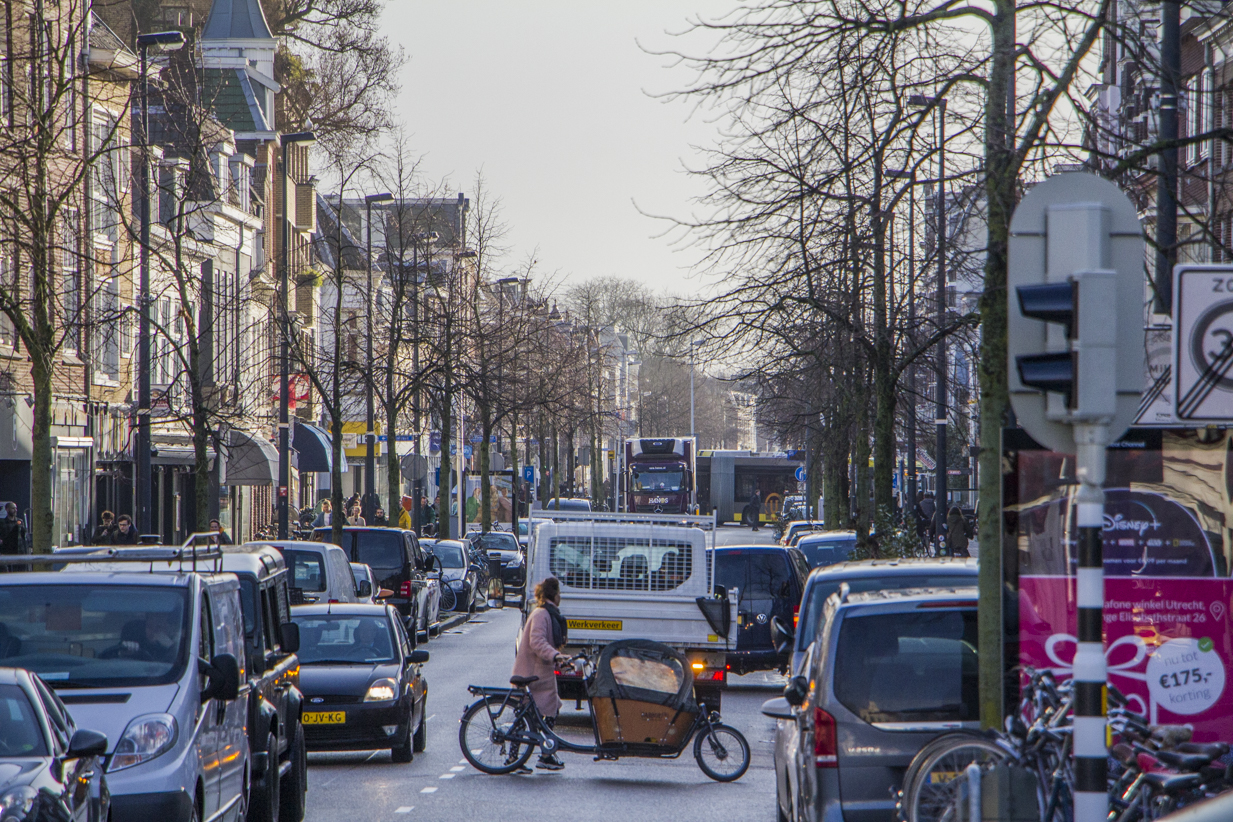 1. Alternative routes to the Utrecht Science Park
The routes from the city centre through the Biltstraat and the Nachtegaalstraat are very busy. So take a different route. Maybe you'll even see some of the city! One alternative is for example the “Herenroute” (Gentlemen's Route). The Herenroute runs from the southern exit of the bicycle parking at the Central Station to Herenstraat and Maliesingel. From the canal, you cycle to the Burgemeester Reigerstraat. The disadvantage of this route is of course that cyclists return to Burgemeester Reigerstraat. "But there is also a big advantage: you avoid the intersection at Vredenburg", says Peter van Bekkum, chairman of the Dutch Cyclists' Union Department Utrecht. 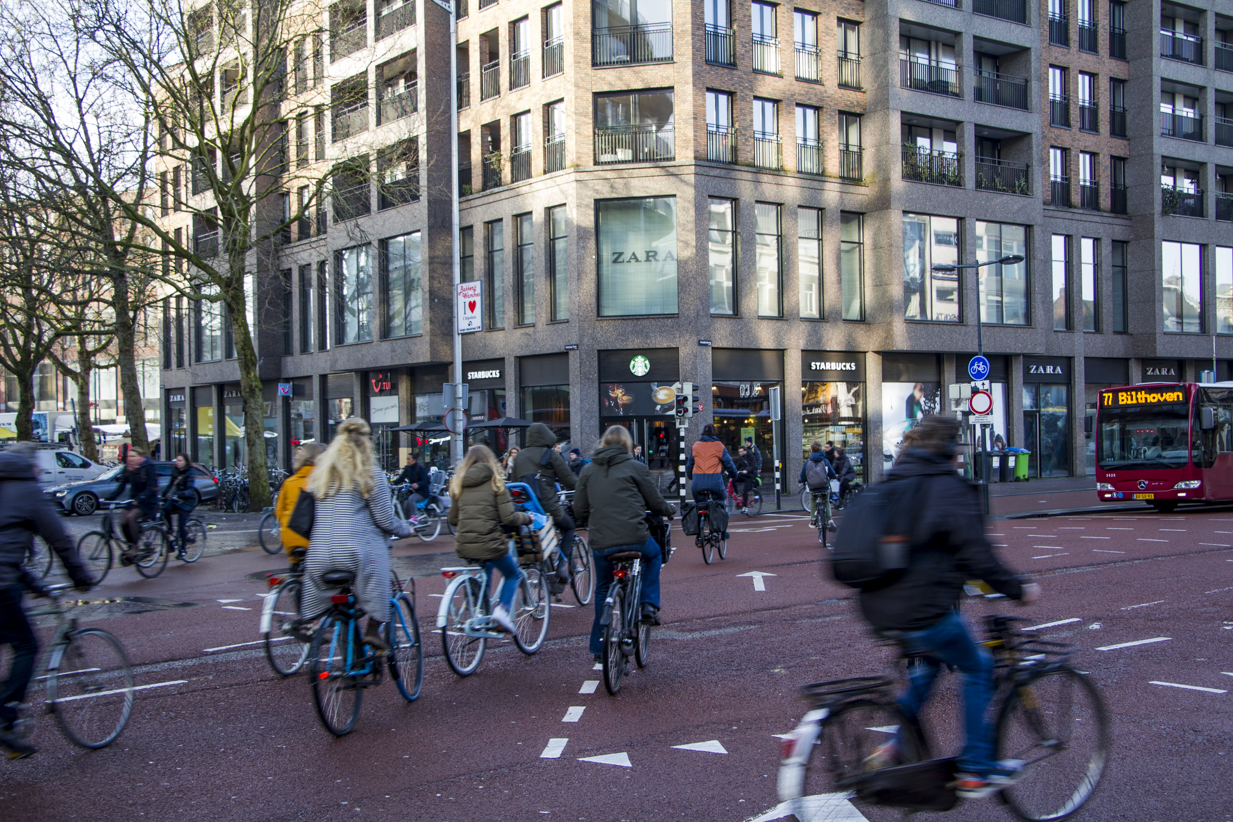 The municipality is also working on alternative routes. "One of the alternative routes is through the Cicerolaan in Rijnsweerd, for example. The intersection of the Platoweg and the Weg tot de Wetenschap will then be partly spared", says spokesman for the Municipality of Utrecht, Matthijs Keuning.

Another alternative for those coming to Utrecht by train is the route from Vaartsche Rijn station. You would then cycle from Vaartsche Rijn through Sterrenwijk past Galgenwaard stadium to the Utrecht Science Park. "As a commuter, park your bike at Vaartsche Rijn Station instead of Central Station," says Peter van Bekkum. "The route can also serve as an alternative if the main routes along Voorstraat-Wittevrouwenstraat and Nachtegaalstraat-Reigerstraat are closed in the near future. This is, of course, a tragedy for the people who have to come from the city centre, but it can be a good alternative". The route along Voorstraat and Wittevrouwenstraat will be a bicycle street from April until the end of this year. Nachtegaalstraat and Burgemeester Reigerstraat will be rebuilt early 2021 for the same purpose.

2. The car as guest
The municipality is trying improve the trip to the USP and therefore two routes are going on the shovel. The Voorstraat and the Wittevrouwenstraat will be turned into a bicycle street. Cyclists will soon cycle on the car lane to the USP. Cars will be guests in this street. In addition to the Voorstraat and the Wittevrouwenstraat, the Nachtegaalstraat and the Burgemeester Reigerstraat will also be overhauled. A bicycle street will be created here as well. Hopefully it will work this time. Years ago, an attempt was made to turn this last street into a bicycle street, which failed miserably. 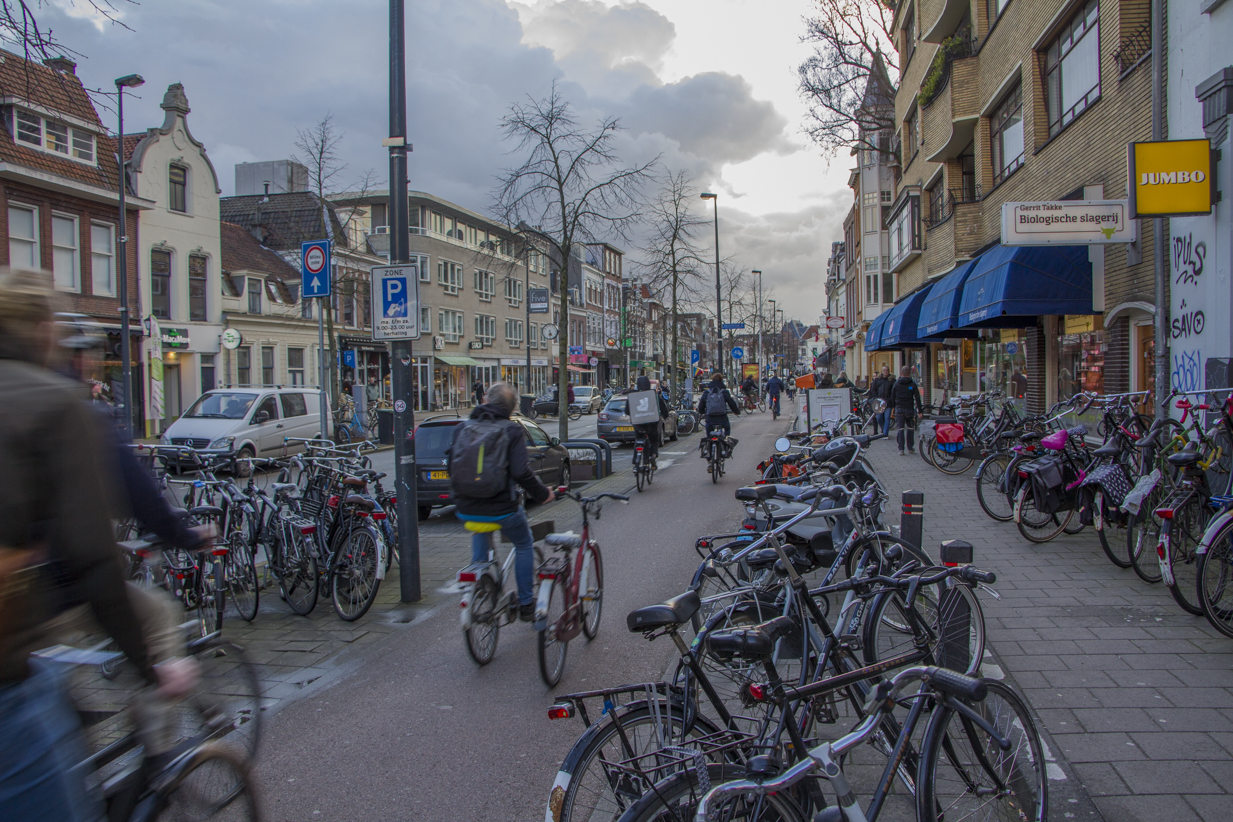 3. Separating the speeds
The Fietsersbond (Dutch Cyclists' Union) is lobbying with the municipality for a plan to separate bike paths into a section for slow and fast cyclists. "It is a very interesting solution. It still needs some work, what do you do with the intersections and do you really want a divide between the slow and the fast part", says Peter van Bekkum.

Veilig Verkeer Nederland (Safe Traffic Netherlands) can also see the benefits of this. "Not only is it getting more crowded with regular cyclists, but there are also more and more express bikes on the road. Due to the large speed difference it might be useful to make a fast and a slow bike path", says Rob Stomphorst, spokesman for Safe Traffic Netherlands. "The bike paths in the big cities are all too cramped," adds Stomphorst. "Space has to be proliferated. As Veilig Verkeer Nederland, we are of course only happy with that. We like to see people take the bike, but it does require innovative adjustments from the municipality".

The municipality and province are interested in special bike paths as well, but think mainly of express bike routes between cities and villages. "An express bike path is of course something we take into consideration. For example, we are building an express bike route to Amersfoort," says Matthijs Keuning. "We actually have the luxury that we have so many cyclists, because that is of course better than the car. But then we do have to come up with solutions and innovations, and the municipality is constantly working on that".

The police also keep an extra eye on the bike paths in the direction of the USP at times. "Should there be a need for extra surveillance, this will be noted by the surveillance officers," says police spokesman Willemijn Pomper. "Therefore, this can be different every day." 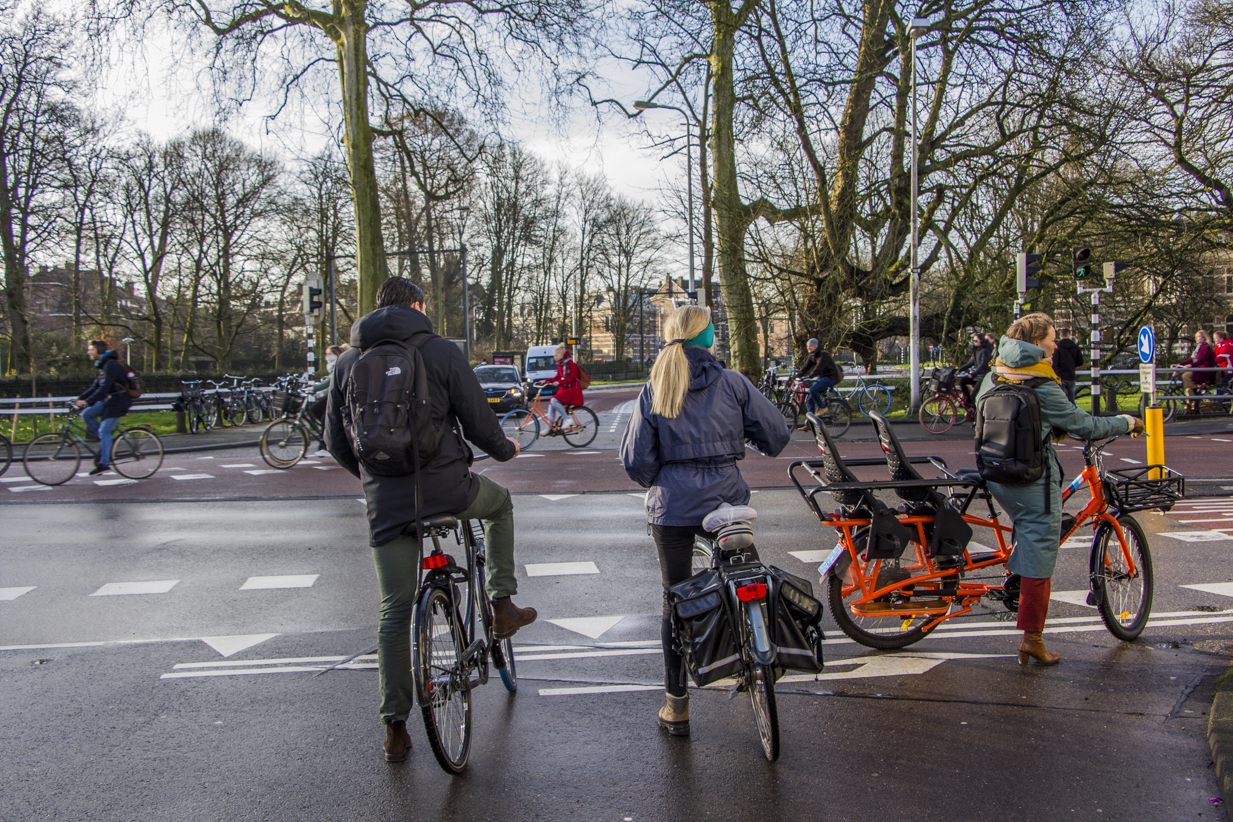 "Or make sure the students and staff are able to do more work from home. Many lectures are already given exclusively via an online presentation", says van Bekkum. "You could expand this even further. Students shouldn't get lazy of course, but I think this could be a good way to reduce the congestion in bicycle traffic". 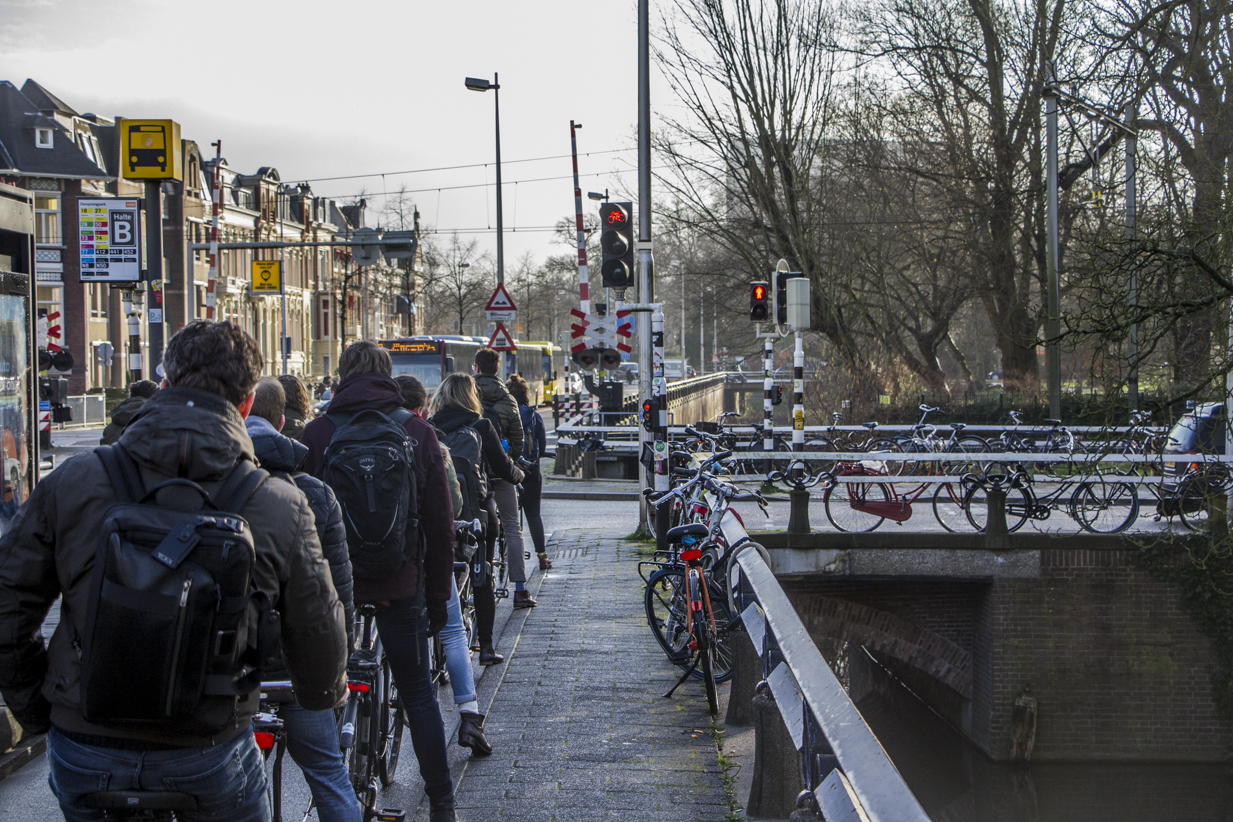 5. Adapt your own behaviour!
"Adapt your behaviour to the people around you", that's the most important thing if you want to get from A to B safely, according to Van Bekkum. "It starts with yourself. It's the easiest thing you can do and it has immediate results." It would be better to not send a quick text to your loved one or sing along loudly with the music, if it is up to Van Bekkum: "It's a cliché, but it can obviously cause dangerous situations. Just keep your attention on the road."

"95 percent of all road accidents are caused by road users themselves. So pay attention in traffic and take good care of your bike. Make sure the bike and the basic lighting are in order," says Stomphorst. 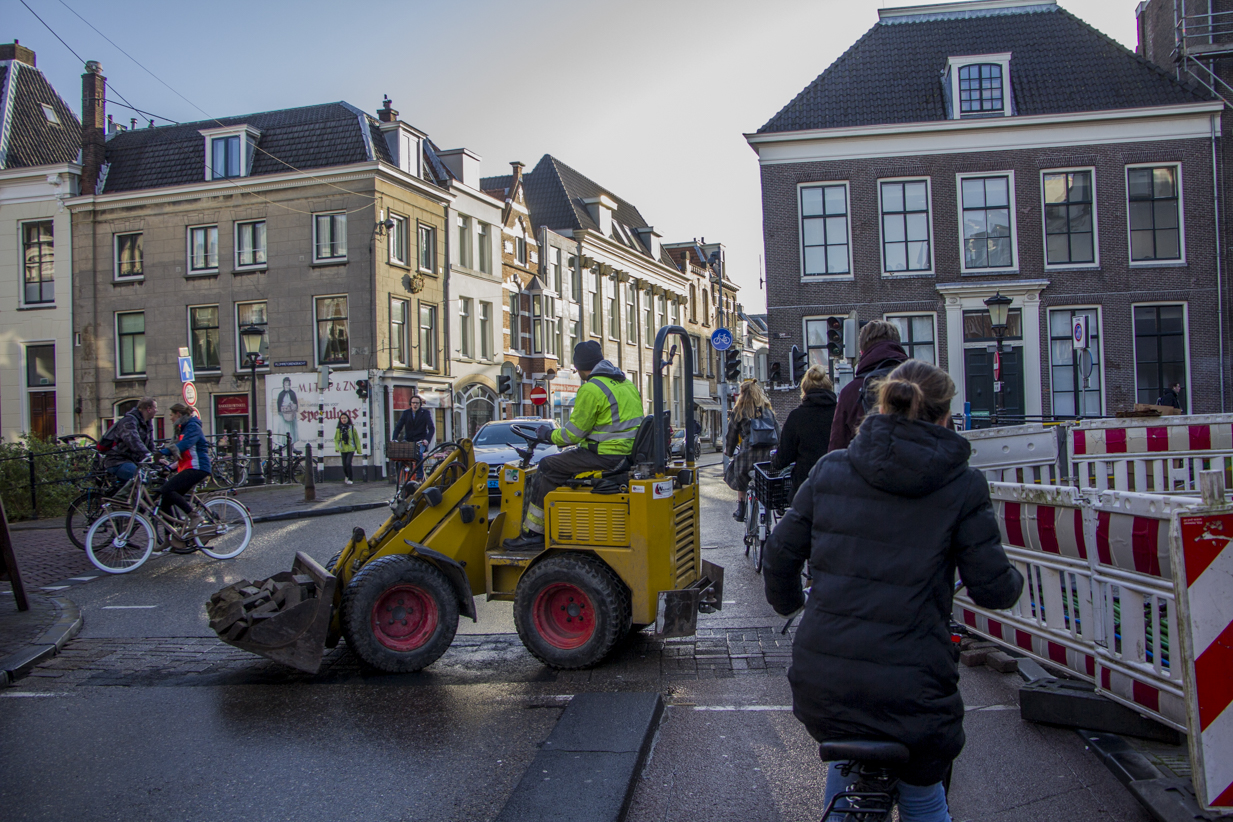 Challenge: Cycling to the moon together
Utrecht University, Utrecht University of Applied Sciences, UMC Utrecht and a.s.r. Insurance are participating in the ‘Ik fiets’ (I cycle) challenge (in Dutch), which has been set up by the province. This challenge runs from 1 March to 14 May, the national Bike to Work day. The idea is to cycle a combined distance of 384,000 kilometres with all participants. That is more than 9,000 times up and down from East Utrecht to Amersfoort. And a single trip to the moon. Students are also allowed to participate. When the challenge is completed on 14 May, 10 extensive lunches will be raffled off per employer at one of the other companies in East Utrecht.