Short Track Centre is the second home for UU talents

Thanks to Olympic champion Suzanne Schulting, short track speed skating is an incredibly popular sport in the Netherlands. Four talented short trackers are currently studying at the UU. DUB spoke with two of them in a student top sports centre.

Bright red jackets, helmets, sports prizes, water bottles, bathrobes, underwear, red-white-blue training jackets and of course a lot of skating. In the locker room, renovated by the short track talents themselves, somewhere in the top of the ice skating centre De Vechtsebanen, the colours are not the only thing standing out. The conversations taking place on chairs which remind you of old hotels attract attention as well.

A female short tracker with abdominal pain receives a list of possible diagnoses from her fellow male athletes: from appendicitis and menstruation to pregnancy. Further common topics are chicks and crazy events at training camps and around international competitions.

A little further down, people are sharpening their skates, followed by 'the canteen', with a few tables and chairs and a sitting area with an armchair where you cannot get out off and a large sofa. If you forget the strength base and the skating rink and do not know that this is one of the three short track talent centres in the Netherlands, it looks like a student house.

“Well, this is a bit bigger,” says Bram Steenaart. It is half past nine in the morning and he has just finished his daily training. The first-year Law student was nominated for the Utrecht sports prize talent of the year. “I lost to a fourteen-year-old girl! A skater. But I googled her and saw that she had participated in a World Cup. I haven’t done that yet, so I'm not disappointed.”

Short track is a hard sport, that's what I like about it

Bram is the guy you expect from short track, a super-fast dynamic sport. Sharp, a powerful gaze, and knows what to say. “Short track is a hard sport, that's what I like about it. It is man against man, in contrast to long track skating where time is leading. Here, it is fighting for your spot and that is what you want to do as best as possible. "

Beside him on the corner bench is Selma Poutsma. She has had a sports adventure in France that she recently told about in national newspaper the Volkskrant. Now she has started a study in Liberal Arts & Sciences in Utrecht. Selma is Bram's opposite. Quiet, soft voice, preferably in the background. “People often say that I do not have the character of a short tracker at all. I am a little too nice. I can fight for my position, I can, but it is not in my nature.” Bram: “I am not someone who, if he is caught up, says: go ahead.” Selma: “I am.”

I am a little too nice

The short-term goals of the athletes are also different. Because Selma came out for France in recent years, she is not allowed to compete in international competitions for a year now she is back in the Netherlands. All arrows are focused on her study. "I've tackled this year to do a bit less skating, I have few competitions. I do train in a lot, also on the long track.” That sounds like Jorien ter Mors, who was successful in long track skating and short track. “I'm not so good at both sports yet, but would like to combine them next year.”

For Bram this year the focus lies on sports. His trainer in this Regional Talent Centre, former Olympic participant Niels Kerstholt, helps him to refine his technique. At the Junior World Championships in Montreal, Bram and his team won silver on the 3000 meters Relay. “Every day I try to improve myself on the ice.”

The article continues below the photo of Bram 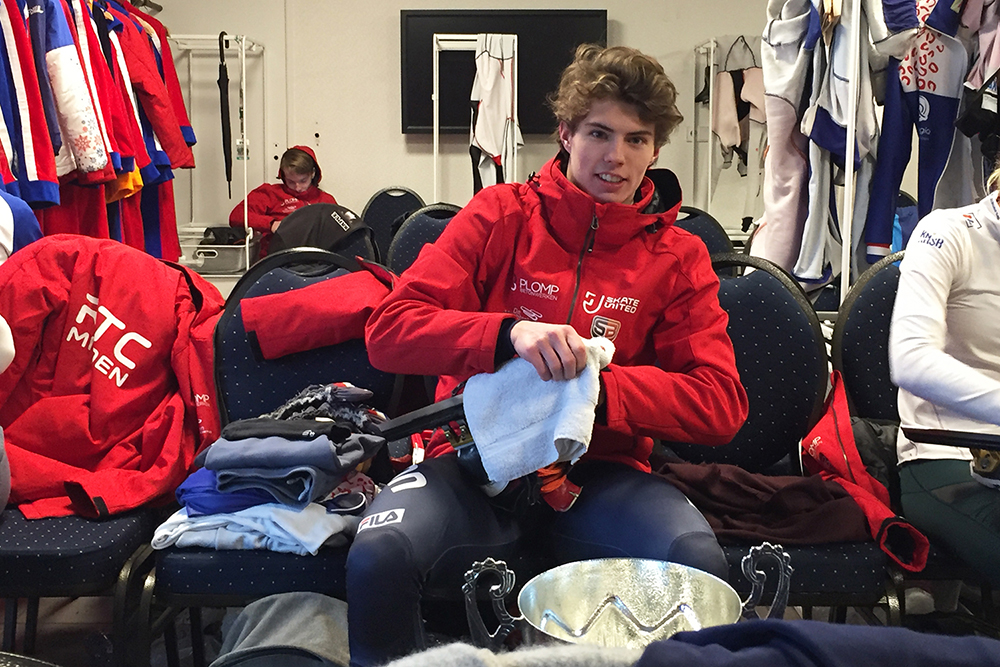 Especially during the competition season, studying disappears in the background. The UU facilitates. Bram has an adapted study programme, can join different work groups and receives reimbursement for travel and accommodation for foreign competitions and training camps. “It is difficult, because I am a bit behind compared to the rest. But because the Law programme consists of a lot of self-study, it is easy to combine with my sport.”

Occasionally, having other people than short trackers around him works well for him. “It puts everything into perspective a bit. If I were only focused on skating, I would go crazy. I think it's important to also deal with 'normal' non-sports people.” The transition from high school to university was a big leap. Bram: “I thought: Wow, where do I have to get all of the information from? There were so many sites and places where I had to see what I had to do for a week. But you'll get the hang of that too.”

For Selma, the change was huge. Getting used to her own country again and to a new school system. “A lot was new for me. A huge building, a lot of different people with different interests. Very interesting, but there is a lot going on. A lot of stimulus, that takes some getting used to.” Bram: “You used to go to class from 9:00 until 15:00. Now you come to the university for one lesson and you go home again. Because of this you also build up less of a connection with your class.”

The article continues below the photo of Selma 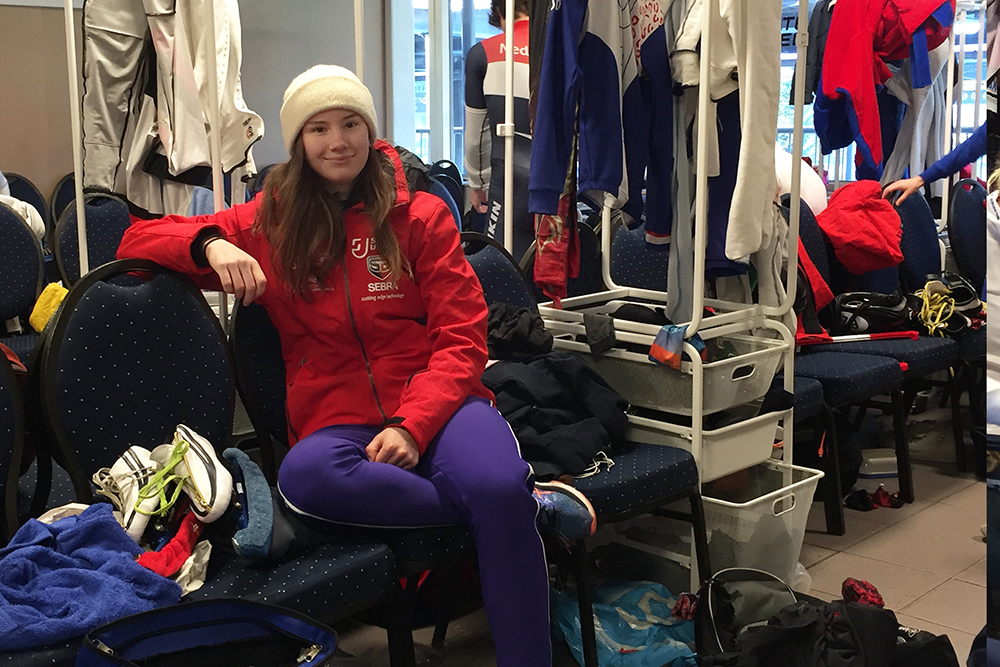 Soon after the interview, Bram will return home, with his parents in Westbroek. To view a few lectures at home. Selma lives in a student room and is always off on Friday. Making a summary is the plan. She wants to complete the first year and then pass the second year without too much delay. The fact that her life is now focused on her studies does not mean that her sports ambitions have disappeared. “But I especially want to enjoy what I like doing.”

Bram’s goal? “A medal at the Olympic Games. Sounds great. But yes, only a few people get that opportunity. Still, I hope that it works out.” And if not, then a career in law is still a possibility. “Being a judge seems very nice to me. Being a lawyer as well. Being a public prosecutor not so much. But a corporate lawyer, more on the economic side, also sounds good to me.”

Student life? We don't do that

Bram is 18, Selma 19. There is enough time left. What about student life? If you have to be on the skating rink at 7:00 am, you can come straight from the pub. “We don’t do that,” laughs Selma. “I like going out,” says Bram. “Since the competition season started, I may have been to a party once or twice. But it simply cannot be combined. In the weekend, you have to rest for the next week” Does this mean a whole study without parties? Bram: “In April we have a rest month. Then we are ice-free and it is only a bit of cycling and strength training. So, then I can just go to parties.”