You can best describe the podcast as a collection of open-hearted kitchen table conversations geared towards young women. The Utrecht-based friends Myra Bledoeg (22), Malika van de Weerd (22), and Sanne Savelsbergh (23) started their podcast during the corona lockdown. Sanne: “Our studies and my work were on hold, and we were stuck inside. We first planned to make live radio, as encouragement for other students in quarantine, but it turned into a podcast.”

The first podcast was published online on April 22. Now, the series has 19 episodes, of 30 to 50 minutes each, with an average audience of 2,000 people. “We never expected that. Podcasts are popping up everywhere, especially in corona times, but most end after four episodes or so. We kept going, because we noticed our audience was enthusiastic, and so were we.”

UVSV
The girls met through sorority UVSV. “But we try to keep that in the background,” Sanne says. “We want to be inclusive and familiar to everyone: like a billboard for all students in Utrecht. It shouldn’t be a weird association bubble.”

The three often had discussions on Wednesday evenings at the association. Sanne: “Myr is a fierce feminist, and I hadn’t really thought about that yet. And Malika really focused on sustainability and good living; she was a vegetarian, for example. I was always kind of the provider of entertainment, jumping into every discussion with humour. We were often inspired by each other’s way of thinking, and with those differences, we had very interesting, refreshing conversations.”

It was scary and exciting to start a podcast, Sanne said. “People quickly think it’s pretentious. You think you’re so important that you think people will want to listen to what you’ve got to say.” Most responses, however, are positive, and the critical comments the girls get refer to the content. “We do provoke that a little. We make fun of a lot, and regularly ask our listeners about their opinion. So you have to be able to handle the criticism. The best part is when people contact us to say that something we did made them think, or that our podcast was a conversation starter.”

That ambiance is important to the podcast creators. “The power of this podcast is a homely conversation. As if you’re just listening to a couple of friends having a discussion. That’s how it feels for us when we’re making it. The first episodes did have a script, but from episode five on, we let that go more and more. We just have the conversations and discussions like we normally would, but now there are microphones.”

Taboos
In a relaxed way, the girls tackle difficult subjects. “We think taboos are very interesting. And because we’re good friends but each have very different world views, we can talk about them openly and honestly.” What those taboos are? “Well, for instance, homosexuality among students and within associations. I know very few women who are openly gay. You can wonder about why that is. Does our environment feel safe enough to come out to?”

The episode about the black lives matter movement (BLM) was also a challenge to make, but was also very worthwhile for the girls. “We noticed that the subject was very much alive in our environment, but that people didn’t just dare have that conversation. Malika is a woman of colour herself, and beyond that, we’re in a very white bubble. So we thought it was very important not to shy away from the conversation.” Aren’t you afraid to say or ask the wrong thing? Sanne: “Yes, there were some things that were difficult to address. Racism is a very precarious subject, but because we’re friends, the episode became very vulnerable and beautiful. Everything was on the table.”

Guests
Aside from Kim Holland, guests in the podcast included journalist and activist Milou Deelen (about slutshaming), blogger Floor van Liemt (about being severely ill at a young age, and being confronted with death), and filmmaker Vincent Tilanus (about sexual diversity in films and series). The most recent podcast invites Romy Bresseleers, the creative director of social media star Anna Nooshin. She talks about finding your own identity and distinguishing yourself from the masses. 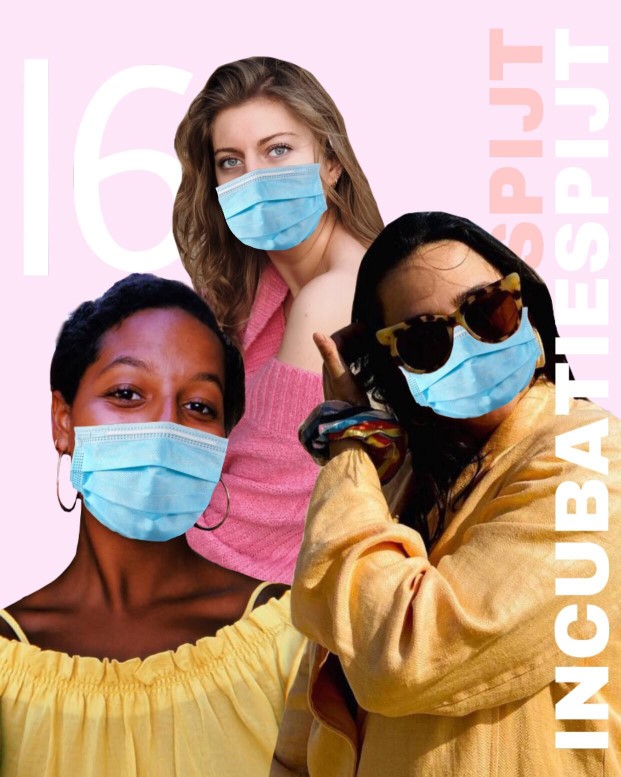 The podcast is aimed at women, but there are some male listeners as well. “They listen in covertly,” Sanne laughs. “They stay in the background. We accidentally found out that they’re listening, through certain comments about the content, or questions we’re asked. On Instagram, 93 percent of our listeners are women, and 7 percent are men.”

Until recently, a new episode was published every Wednesday, but that’s now turned into once every two weeks. “Life is slowly going back to normal, so doing one every week is a little much next to your studies and work,” Sanne says. She studied journalism at Utrecht University of applied sciences. Malika is a Master’s student of Metropolitan Analysis, Design & Engineering in Amsterdam, and Myra is studying the Master’s of Law & Economics at Utrecht University.

Wink
And the name – Dom Doen (meaning ‘acting stupid’) – isn’t it a little negative? Sanne laughs. “It’s said with a wink. Of course it's a reference to the Dom tower, but it’s also meant to provoke a little. With a name like that, and all the pink in our branding, you’d expect some dumb chats about superficial subjects. But we go deep. And we’re feminists, so linking women to pink and other stereotypes is exactly what we don’t want. So we’re making fun of that.”

The titles of the podcast episodes also stand out. “They make the hairs on the back of your neck stand up, but that’s exactly what we want. The episode about slutshaming, for instance, is called ‘Slettenbak’ (slut, ed.), the episode about body positivity is called ‘Kilokech’ (kilo whore, ed.) and the one about identity is called ‘Kuddekut’ (rather untranslatable, but something like ‘cunt following the masses’, ed.). It’s a little rebellious, with a huge wink.” 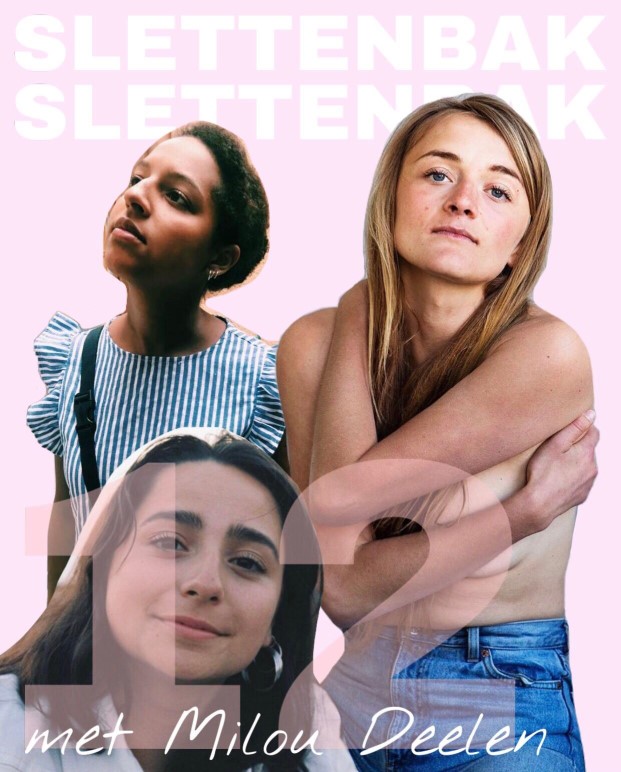 Tim Hofman
The podcast can be found on Spotify, Soundcloud, and the Apple podcast app. On Instagram, the podcast now has over 1,000 followers. “We went from 300 to 800 followers in one day because of a shout out from Tim Hofman, that was insane,” Sanne says. In the fourth episode, the girls criticise Hofman, a TV personality for BNNVARA, after which they’d contacted him to ask for his response. He appreciated that gesture, because he then put a screenshot of the Dom Doen podcast in his Instagram stories, captioned ‘tip: follow this podcast’. “The phone exploded, really.”

The podcast has a very specific audience, so in time, the girls hope to find sponsors. “Now, we’re just spending our own money on this, but if we want to continue with the podcast, we’ll have to come up with a way to make money. It takes a lot of work, so we can’t keep doing this for free, no matter how much we love doing it.”