Twenty years ago: party and cake for the UU Nobel Prizes

It’ll be twenty years ago this week that UU physicists Martinus Veltman and Gerard ‘t Hooft received word that they’d won the Nobel Prize in Physics. The award was a milestone in the history of Utrecht University. Cake was handed out to all students and employees to celebrate.

On October 12, 1999, UU physicist Gerard ‘t Hooft gives a speech in a room at the university of Bologna. As he finishes his talk, a lengthy applause greets him. He’s used to some level of appreciation, but this is quite out of the ordinary. It’s only when he hears someone mumble something vague about the ‘premio Nobel’, and sees a website pop up behind him with the press release from Stockholm on it, that understanding dawns. His first thought? A new era is starting for me now.

That’s how the Ublad (DUB’s predecessor) of that week describes the moment the UU professor heard that he, along with his mentor Martinus Veltman, had been awarded the highest scientific prize there is. ‘t Hooft was very down to earth about it. He had already adopted a policy of not listening to any predictions, and had not realised that the Nobel Prize winners would be announced that day.

Talking on the phone from his home in Houten twenty years later, the Nobel laureate reveals that it wasn’t a coincidence that he’d been in Bologna that day. “The Italian colleague who had invited me, had been convinced this would happen. A year before, I’d also been in Bologna on the day of the announcement. I even received an honorary doctorate then. For my host, I suppose it would’ve been even better if I’d won the prize in 1998.” 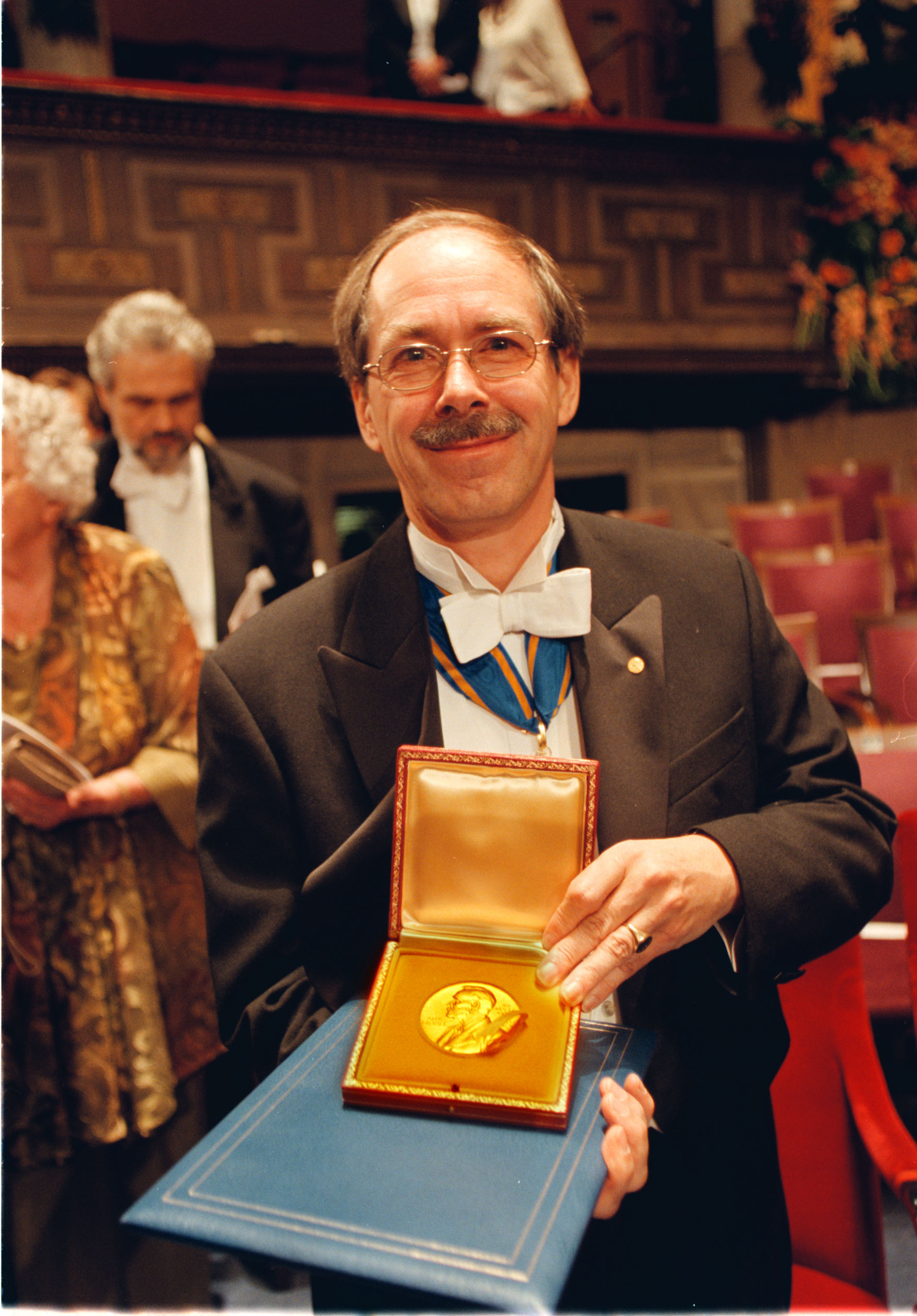 But that a Nobel prize changes your life, as he’d immediately assumed, is definitely true. “It depends on you, perhaps. You can just continue what you were doing, or choose the opposite extreme and live life as a professional Nobel prize winner. I chose somewhere in the middle of those two. Your status undeniably becomes greater. That has many positive and pleasant aspects, but sometimes a few unpleasant ones as well.

"I can’t, for instance, simply join any regular conference. People will look at you strangely. You’re more likely to be asked for large-scale audience lectures. I love doing those, but sometimes I would just like to talk about the research I’m working on right now.”

A small playbook
In the UU Administration building that Tueday, October 12, 1999, press officer Joop Kessels (who would later become the director of the UU Corporate Office) receives a phone call from Physics dean Hans van Himbergen. He runs to president Jan Veldhuis, one floor up, to share the good news. Speaking with DUB, Kessels and Veldhuis relive their memories of that day.

A small playbook had been prepared, just in case. The university sent out a press release with photos that had already been written with ‘t Hooft himself. Journalists were invited to a press conference on Wednesday in the Auditorium of the University Hall.

Naturally, the executive board contacted the two laureates and their spouses. It took a while before they realised ‘t Hooft was staying in Bologna. They made agreements with Gerlach Cerfontaine, Schiphol top executive and ex-manager of UMC Utrecht, for the reception of ’t Hooft at his return from Italy on Wednesday, as well as for travel from the airport away from the eyes of reporters.

Minister Loek Hermans also congratulated the UU that day, announcing that the two Nobel prize winners were to receive a royal decoration. For that occasion, a celebratory get-together was planned to take place in the Minnaert building on Thursday.

Looking back, Kessels remarks how times have changed. Current Nobel prize winners are immediately met with an avalanche of media attention. “I suspect that the big difference lies in the speed the media have these days, in social media and mobile communication. Back then, everything went at a much slower pace. Nobel prize winners are a lot more visible now, literally.”

Reporting from the Ublad shows the media craze was manageable at the time. One of ‘t Hooft’s lectures was moved to a bigger lecture hall to be on the safe side, but that turned out to be mostly unnecessary. ‘t Hooft, at the time: “I even had time to discuss a student’s study progress in peace.”

Cake for everyone
At the university, a sense of joy was omnipresent, Kessels remembers. Many congratulations poured in from outside the university as well. The executive board decided to order cake for all of its 22,000 employees and students – a unique operation. The university’s own baker De Raad, bakery Bloemstra at the Biltstraat, and the HEMA were all called in to make sure that on Wednesday, the entire university would be able to share the joy.

That week, the Ublad published an article in which it describes students and employees alike jostling to get to the cake. People jokingly commented on the fact that that year, the UU had ranked lowest in student satisfaction in the Higher Education Guide because the facilities for students were so poor. One student says cheesecake (called ‘quark cake’ in Dutch) would’ve been more appropriate than chocolate, because “didn’t the award have something to do with quarks?” A few happy people run off with entire leftover cakes.

With the two Nobel prizes for Veltman and ‘t Hooft, there was truly cause for celebration. And not just because after bacteriologist Eijkman, ‘t Hooft’s win meant that finally, a ‘real Utrechter’ had won something, the Ublad analysed that week. Many of the previous ten winners had graduated from the UU, but had only worked in Utrecht for a very short time, or had left the UU by the time they received the award.

But Jan Veldhuis says the value of these Nobel prizes was greater, especially looking back. The university in Utrecht had only recently recovered from large-scale cutbacks in the 1980s, and the loss of a number of study programmes (including dentistry). “It was a restoration of confidence, and the feeling of pride of one’s university grew. That trend received an extra impetus.”

The Nobel laureate himself also sees the value of the prize for the university. Not in the least because the rankings of best research universities that were later created included Nobel prize winners. The UU partially has ‘t Hooft to thank for its high position in the Shanghai ranking and its subsequent prestige. ‘t Hooft remembers a visit the UU made to China early this century. “I was in Japan at the time, and it was easy for me to join the visit. That was greatly appreciated there. I’m a part of the face of the UU.” 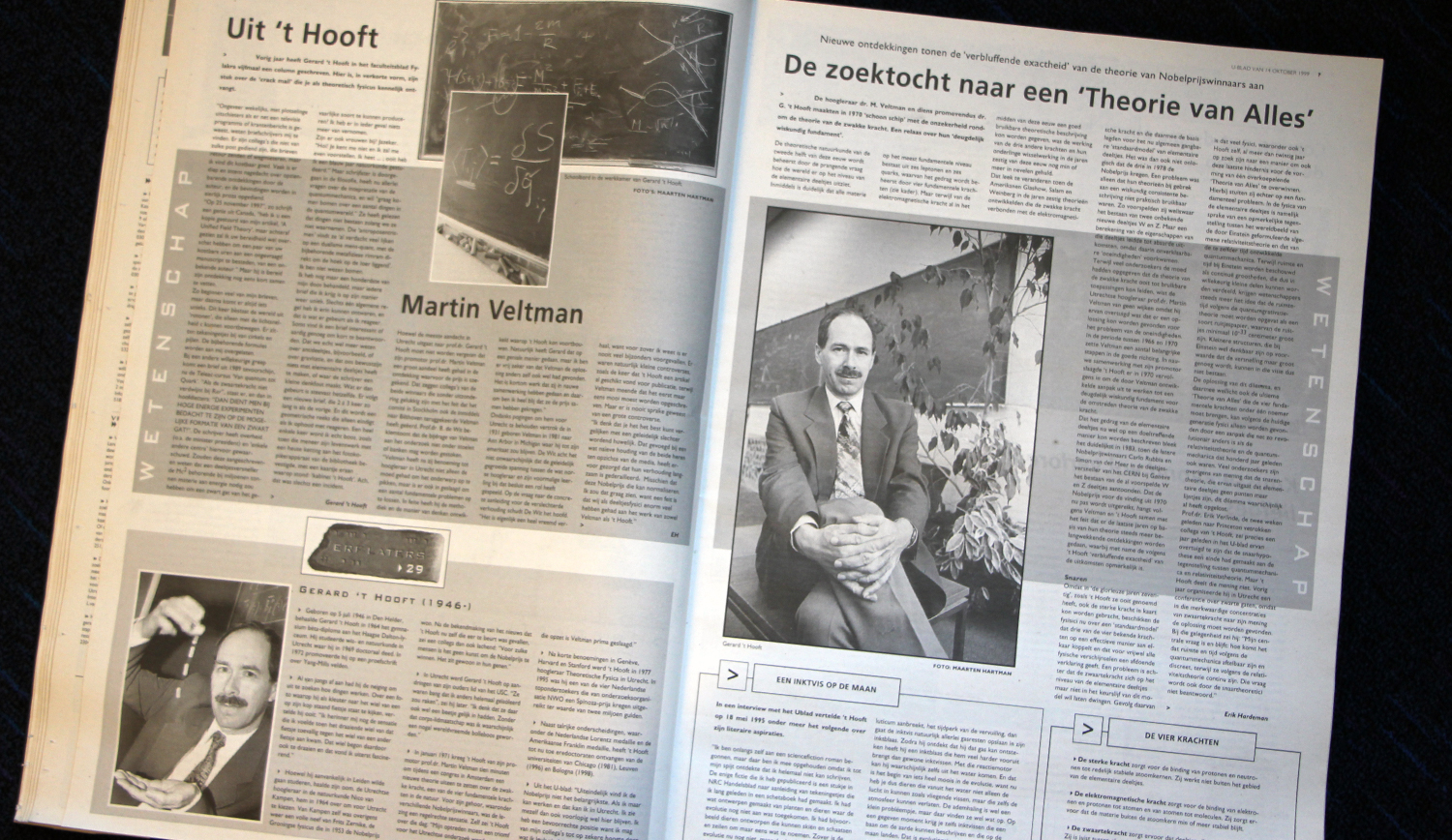 A deteriorating marriage
In an edition of the magazine Old Utrecht this month, historian and ex-editor-in-chief of the Ublad Armand Heijnen describes how the university had started to cautiously ready itself for the award in the 1980’s. Not that there’d been an exuberant lobby circus, but some bumps in the road had been cleared. The university’s difficult relationship with Veltman, for instance, had been restored after a dinner and visits from UU president Veldhuis. Veltman had left the UU in 1981 to work at the university of Michigan, and had clashed with the UU’s board at the time, which didn’t want him to remain a visiting professor at the UU.

One sore point, however, remained the difficult relationship between Veltman and his one-time PhD candidate ‘t Hooft. Together, they created the mathematical foundation for elucidating the quantum structure of electroweak interactions, one of the four fundamental powers that control matter behaviour. But throughout the years, their relationship had deteriorated. A programme aired by TV show Netwerk illustrated that on the night of the announcement in front of its entire Dutch audience by connecting the two over the phone. It was a brief, cold conversation.

What exactly the problem had been remained unclear. In the Ublad, UU department president Bernard de Wit said, shortly after the two had won the Nobel prize: “I think you could best compare it with a gradually deteriorating marriage.” He expressed hope that the Nobel prize could serve to improve the relationship.

‘t Hooft, too, expressed the same wish. Twenty years later, he has to concede that that has failed. “The relationship still isn’t all that fabulous. It’s difficult to approach him.”

Inspiration for future students
The prize wasn’t just valuable to the UU, but for all of physics in the Netherlands, Veldhuis thinks. The STEM study programmes had been less than popular with prospective students for quite some time. “This award has helped increase interest.”

From the very first moment on, Nobel prize winner ‘t Hooft has said he hopes to be an inspiration for future generations of students. From the Ublad of October 14, 1999: “It’s much more important to me that enough young people will keep choosing to study Physics. I hope I can contribute to creating the image that scientific research is, above all else, fun. Now that I’m a Nobel prize winner, I expressly see propagating this message as a new task.”

Whether he’s succeeded in doing so? He thinks he has. It’s a fact that many students chose to study in Utrecht because of the reputation of theoretical physics here. But he’s also tried his best to enthuse children and teenagers for the STEM sciences.

‘t Hooft refers to the fact that his great uncle Frits Zernike had also won a Nobel prize in Physics, in 1953, and how that had inspired him when he was a child. “That was important to the family, and gave the profession a golden halo.”

On the morning before our talk, he signed his autograph on thirty telescopes of the Ghent-based project ‘Stars shine for everyone’. The telescopes travel around the world with the goal of sparking children’s interest in astronomy. “Those types of things remain very special to me.”

The fortieth anniversary of his Nobel prize, by the way, was not celebrated lavishly in Utrecht. At the start of the summer, a symposium with fellow physicists was held in Utrecht for the occasion. About the philosophy of natural sciences – a subject Gerard ‘t Hooft himself had always been interested in, too. But that’s about it. More isn’t really necessary, the ever-humble physicist thinks.