A record number of travellers took the tram on Tuesday, 4 February. On this dreary day, more than 28,000 people travelled by tram, a lot more than the maximum of 23,000 passengers who used to take bus 12. "The goal of the Uithoflijn has been achieved."

In depth
By Noortje van Bentum on 02/12/2020 - 13:00
Read in Dutch
Most tram travellers agree that the Uithoflijn feels like a relief compared to bus 12. The tram is also a huge improvement for the province of Utrecht. "You can say that we have achieved our goal of transporting more travellers", said Ron van Dopperen, spokesperson for the province. “The tram has been running since 16 December 2019, and on Tuesday 4 February 2020 we transported around 28,865 people, based on the number of travellers checking in. A record so far. A maximum of between 22,000 and 23,000 people travelled in one day with bus 12."

Do travellers also think the Uithoflijn is a highlight? The tram runs much smoother, is not dependent on the other traffic on the road and is less likely to be overly crowded, most people think. Students Built Environment Tijn (23), Yuri (23) and Rijk (18) love to ride the tram. "It is really fantastic to travel from De Uithof to the train station so quickly", says Tijn. "And there is enough room for everyone", Rijk adds. Still, the boys would make some adjustments here and there. Yuri: “It's useful to know the arrival time of your tram, then you can adjust your connection. And it would be better to put the check-in posts inside the tram. People regularly forget to check in or out.” 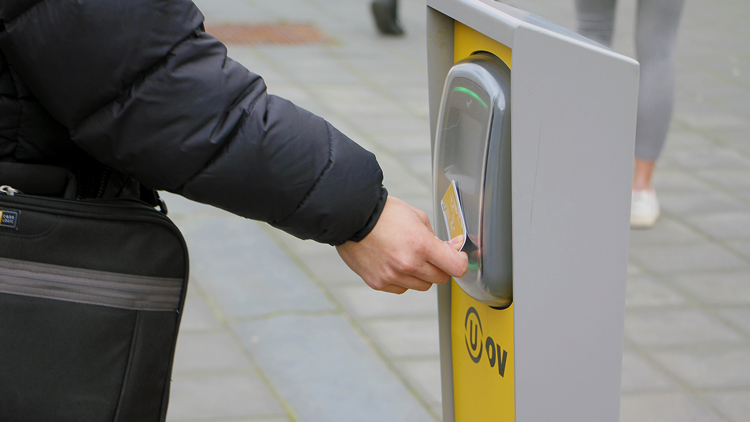 The fact that the check-in posts are placed on the platform creates confusion at times, other travellers think as well. Among them Marleen (19), a Creative Business student. When she made one of her first journeys by tram, she saw that another traveller had forgotten to check in and the person was strictly addressed by conductors. “That was such a shame, because he really just forgot. The posts are in such illogical places on the platform. If you are used to checking in on the inside, such as on buses, you can easily forget to check in for the tram.”

The reason that the posts are on the platform is simple, Van Dopperen knows. “The Uithoflijn is not the first tram in the municipality of Utrecht. Trams have been running from Utrecht to Nieuwegein and IJsselstein since 1983. The check-in posts are on the platforms there as well. We don't want to create confusion by making a new arrangement, so we prefer to use one way of checking in and out.”

Late for an exam due to tram disruptions
Although the tram is perceived as positive, line 22 has regularly encountered disruptions in the short time that it runs. According to Van Dopperen, at least two cases involved a points failure and a few other times a defective tram was the cause of the nuisance. If a tram stops on the track, the rest cannot run either. “If the disruption lasts longer than 45 minutes, we use buses. In cases where we cannot predict exactly how long a failure will last, we deploy them sooner. The tram has not been running that long yet and even after many test drives the teething problems still have to be resolved here and there.”

Psychology student Kimberly (20) can still remember one of the disruptions. “I didn't have much trouble with it myself, but I heard from fellow students that due to the disruption they were late for their exams. That delay occurred twice in two weeks during the exam period, which is quite a lot.”

Other types of nuisance, such as noise from construction and regular maintenance, bother travellers the least. In contrast, residents in De Uithof have to deal with those more. According to the housing board of Casa Confetti, their residents regularly suffer from noise nuisance regarding the tram. “The communication regarding construction has improved considerably since last year. If nuisance is reported in advance, you can take it into account. When the asphalt of the tram track was repaired a few weekends ago, we were informed of the construction as well.” According to the housing board, residents are only occasionally kept awake when regular maintenance is carried out on the tram track. According to them, that happens until at least half past one at night.

Already maintenance on tramway
According to Ron van Dopperen, maintenance will start immediately after the last bus ride at 10:00 in the evening. “We continue until midnight at the latest, specifically to be mindful of sleeping residents. We always report this in advance to SSH, the administrator of, among others, Casa Confetti. Because of earlier signals that late work caused noise nuisance, we are now trying to schedule it as early in the evening as possible.”

Despite the possible noise nuisance, emergency repairs and the occasional forgotten check-in, the tram runs rather smoothly. Newspaper AD reported at the end of January that many people want the tram to run during the weekend as well. Various interest groups and organisations have expressed their views on this. Among them Henk van der Velden, the director of the Science Park. For residents of Casa Confetti it would also be a huge advantage if the tram were to run during the weekend. "It is a shame that such a nice tram is not operational during the weekend," says the housing board. "Not only us, but also visitors and employees of the UMC and the sports fields could benefit from the tram running during the weekend."

A quick calculation shows, according to Van Dopperen, that running during the weekend is not profitable: “There are not enough travellers who travel to the Science Park during the weekend. For now, bus line 28 is a good alternative to travel with. We are currently looking into the possibility of having the trams continue to Nieuwegein and IJsselstein. If we succeed, we can review the route and assess what is possible in the summer of 2021.”