According to PhD researcher and UU alumna Somaye Dehban, we should stimulate interconnectedness in society in order to tackle social issues. In her view, academic disciplines, governments, businesses and civil society should burst their bubbles, forge joint partnerships and engage with the public. “We must encourage researchers to engage in social debates and prioritise research domains that are relevant to society.”

Somaye Dehban presented her views in the university's auditorium in October. Building upon her experience as an international student at UU, a Dutchified Iranian, a mother, and someone who has worked in the development aid sector, Dehban talked about the growing divisions and feelings of disconnectedness in society, suggesting coalitions of different individuals or different societal groups that are usually segregated. 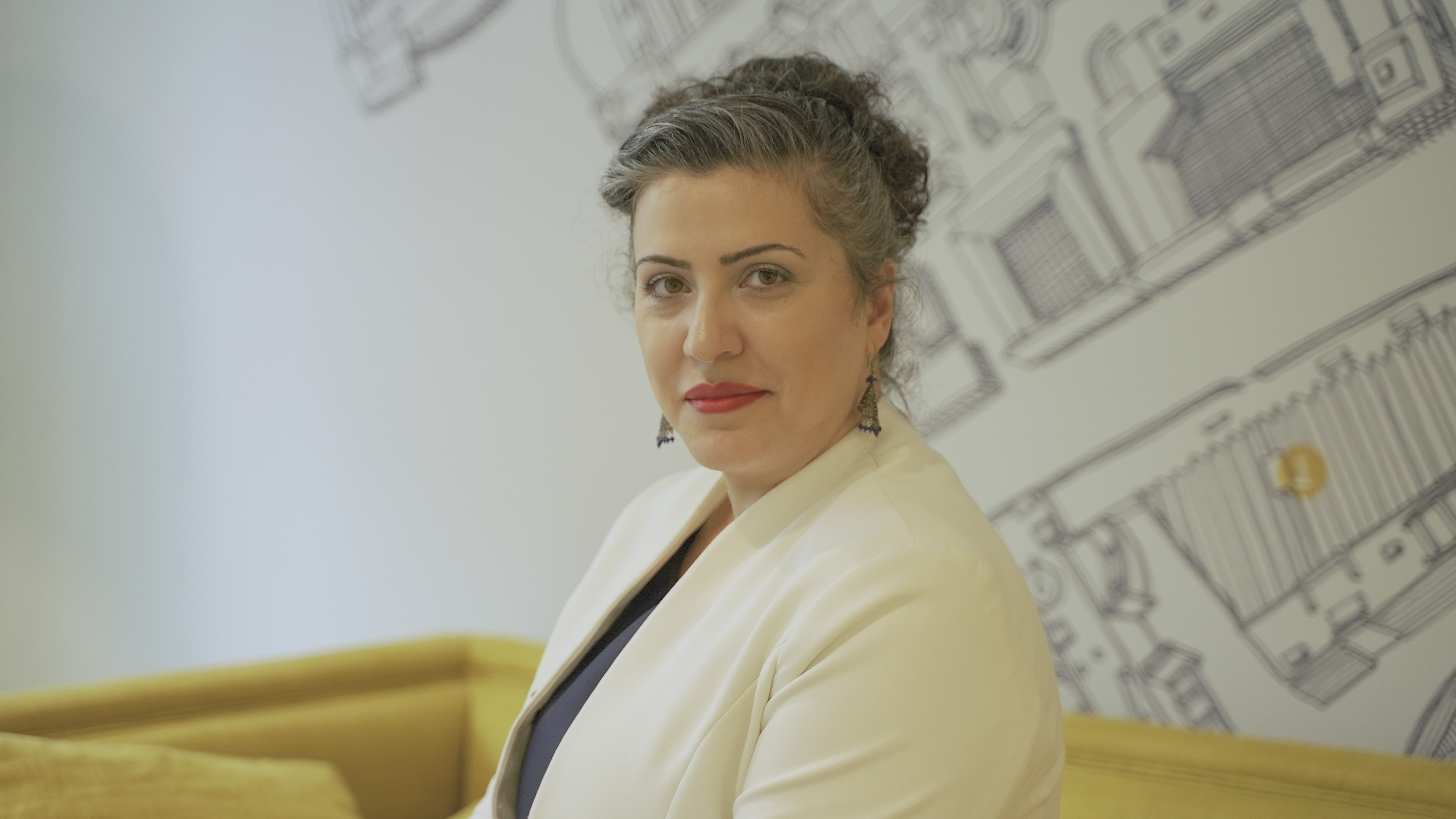 Dehban came to the Netherlands from Iran in 2005, to study Liberal Arts & Sciences at University College Utrecht. She followed with a Master’s in Gender Studies at UU. Since 2019, she is a PhD candidate at Erasmus University's School of Management, where she researches how to enhance and scale up the impact of partnerships involving different sectors.

What kind of societal problems does your current PhD research assess?
“My personal motivation stems from the belief that everyone deserves true personal freedom and equal opportunity to thrive. The United Nation's Sustainable Development Goals, which include eradicating poverty and providing every individual access to water and education, provide a very coherent framework to achieve that. However, the organisations and the funding allocated to achieving these goals are not effective enough.

“Take the development aid sector, for example. After my graduation, I worked in that sector for 15 years, and during that time, I noticed that civil and non-governmental organisations (NGOs) tend to work very independently. In most cases, governments fund these organisations to start a project with a local organisation in a developing country, but when the project and funding ends, there is no follow-up or any lasting change. In addition, a significant share of the funding flows back to the Western people working for the NGO's, without benefiting people in need.

“In my part-time PhD research, I am therefore investigating how cross-sectoral partnerships consisting of governments, public and private sectors can increase their impact when tackling issues addressed by the Sustainable Development Goals.”

What kind of approach do you suggest to achieve these goals?
“We really need to recognize the interconnectedness of the problems themselves, and of the work we are doing. Although the private sector, civil society, academia, governments and other sectors are very much interconnected, we still act as if they weren’t. Our societies have become increasingly specialised and it seems as though everybody is working in their own silo. Researchers only talk about their research with people from the same department, politicians interact mostly with people from their own party, and even at the family level the personal development of an individual is often seen as separate from the family as a whole.

“In my research, I focus on how cross-sector partnerships could connect these separate bubbles. To return to the example of development aid: governments should stop funding individual projects run by international NGO's, and instead form partnerships between local NGO's, businesses, communities and governments, that help these local organisations grow collectively. This is what is meant by ‘international development’, and it also prevents money from flowing back to the funding countries, hence resulting in a sustainable change."

You mentioned that academia also suffers from a lack of interconnectedness. Did you experience this yourself during your studies at Utrecht University?
“My Bachelor's in Liberal Arts & Sciences, which I started more than 15 years ago at UCU, was great because it was interdisciplinary by default. It was very common to combine a course like psychology, offered by the social sciences department, with a course like cognitive neuroscience, offered by the science department. My Master’s in Gender Studies at UU involved the study of culture, politics and literature, and was also very interdisciplinary. So, the borders between different disciplines were minimal, but when it came to the more practical elements, like the opportunity to explore the Dutch society and everything Utrecht has to offer, there was a clear division between internationals and the Dutch students. And, of course, when it came to passing on scientific knowledge to the general public, there was nothing going on back in those days, basically.”

What, then, could make academia more interconnected?
“First, we should have a free flow of academic information. There's a significant amount of research that is not accessible to the rest of the public, which is ironic because almost all research conducted at universities is funded by public money. Even when it is accessible, it is often not comprehensible because of the jargon and the complexity that is part of that specific discipline. So, we should publish the research in open access and also share it in a way that makes it understandable to researchers in other disciplines, politicians and the general public. That would bring us a lot closer to each other.

“In addition, we academics need to be much more engaged with the public debate. We need to make sure that what we are researching is known to the public, and we should make ourselves known by the local and national news outlets when there is a discussion concerning our topic. Currently, the term ‘influencer’ is used to describe celebrities on social platforms like Instagrambut I’m simply disgusted – there is no better word – by celebrities expressing their opinions on issues like vaccination, while they're not knowledgeable about that at all. We academics need to step up and become the influencers of our society.”

How would you convince researchers to take up this public role?
“It is partially about how we evaluate academics and define their contracts. Currently, academics’ priorities are mostly focused on teaching and producing new publications, so public engagement is quite low on their priority list. But, if we assign a certain percentage of researchers' working hours to public engagement, then we will create an incentive for the researcher to actually engage in society.

“However, like most societal issues, this problem is interconnected and it is not just academia that has to change. News outlets should also change their mindset and take the responsibility to look for the right, qualified person when publishing an article on a certain topic. Their articles should be well-researched and increase the knowledge of civil society. If news outlets are not willing to do this because of their dependence on click-dependent advert revenue, the government should step in and create a financial incentive to increase the quality of the content.”

“Best would be to change all these linked elements simultaneously, and then patiently wait for them to take effect. However, you cannot just change one element and expect a result, because there won’t be any. If the academics stand up and share their knowledge, but news outlets don’t do anything with that, we will not be getting any significant results.”

Should the contents of academic research change as well?
“I believe it is crucial that, whatever research we are doing should have societal relevance. Certain levels of research can be abstract and at a theoretical level, but at the end of the day it has to be related to society, and this is not the way research is valued at the moment. Academics have to adhere to the criteria of the journals when publishing an article, but most journals do not have any criteria related to societal relevance. By changing these criteria, our scientists would look at societal relevance as a priority, instead of an optional addition.”