UU President Pijpers: "A closer look" at the renovation plans for the Kruyt building

How about accommodating all Science researchers somewhere else during the renovations of the Kruyt building? That&#39;s not going to happen, said UU President Anton Pijpers last week in a meeting, but he promised to take the worries of biologists and chemists into consideration. They&#39;re not exactly happy with the idea of having to work nine years in a building while it&#39;s being renovated.

Organised at sports centre Olympos and attended by thirty people, the meeting was also transmitted online and watched by approximately 120 people.

Pijpers' visit to the Kruyt building in September 2019, in which he explained why the Executive Board had decided to renovate the outdated building instead of demolishing it, ended in a rather dramatic way. He was met with a lot distrust and emotions.

The timing of said meeting was unfortunate, as researchers suffered from an asbestos leak earlier that same week – certainly not the first incident of this kind. How could the scientists believe it would be possible to repair such a building?

What's more, the decision to renovate the Kruyt building came after the university had spent two years planning the construction of two new buildings. Finally, to add insult to injury, Pijpers had to leave that meeting after just one hour because he had another appointment.

"That didn't go very well and that's my responsibility", Pijpers recognised. "I'm sorry". He also said he would have liked to meet the members of the Faculty of Science earlier to make amends, but that wasn't possible because of the social distancing rules to contain the spread of the coronavirus.

In the twenty months since the first meeting, a number of important steps have been taken, according to the UU president, such as putting an end to a series of water and electricity outages. It looks like that problem has been solved.

Last Thursday, Pijpers reserved two hours for the meeting, which had a much more pleasant atmosphere than the one from one and a half year ago.

Biggest issue: renovating the building with people inside
Pijpers kickstarted the meeting by presenting his arguments in favour of renovating the building instead of demolishing it. In 2019, financial reasons were the Executive Board's key motivation. The university's real estate strategy, which had been adopted earlier that year, aimed to keep the ever-rising housing costs within limits, and the renovation would help in that regard.

Those reasons still stand, said Pijpers, but there is another one that weighs even more. One of the four "wings" of the cross-shaped Kruyt building is empty at the moment. That space can accommodate the explosive growth in both research and the number of students in the Faculty of Science. The university expects both to grow between 25 and 30 percent by 2030.

Another factor taken into consideration is the fact that renovating the building would be a far more sustainable choice, not to mention the Faculty of Science would occupy an appealing building at the entrance of the Utrecht Science Park.

But it's not the renovation itself that bothers scientists the most: they do believe it is possible to turn the Kruyt building into a great place. They also understand the importance of sustainability. The problem is that UU wants to renovate a nine-storey building with more than seven hundred people still working inside it. The plan is to renovate it wing by wing, starting by the one that's empty, with all the educational and research activities being carried on as usual. The entire renovation process is expected to last nine years.

Article continues after the picture. 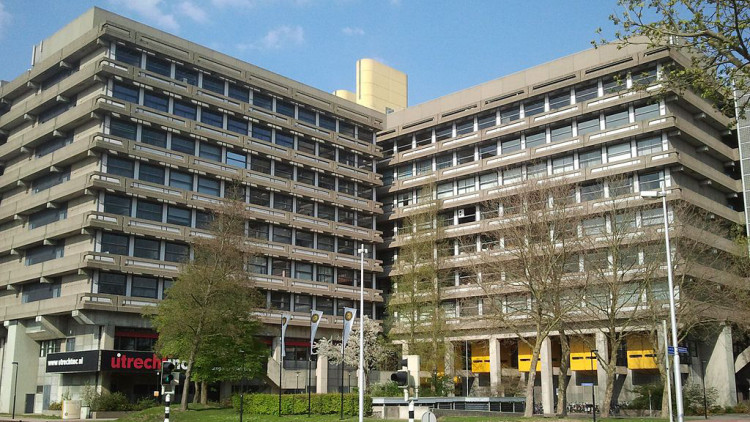 Hard to believe the building could be renovated without disturbing anyone
Anton Pijpers mentioned a feasibility study that concluded there are "enough leads" to carry on with the project according to what the Executive Board had it mind. However, the scientists found all sorts of ifs and buts in the same report, which would require further research.

For example, it would be hard to renovate the centre of the building (also known as "core", where all wings lead to and where the elevators and the stairwell are located) gradually, wing by wing. Moreover, the scientists wonder whether the nuisance brought about by the vibrations from the renovation works would be as limited as assumed.

Chemistry Professor Albert Heck finds it hard to believe that the renovation works wouldn't disrupt  researchers even more. He said his analysts have been busy "maintaining the building" for years, not getting around to their educational and research activities."It's like living in a house that's falling apart and then saying: we're going to renovate it, but we'll keep living there", he said during the meeting.

Biology Professor Sander van den Heuvel wondered if the Executive Board even considered the psychological impact that nine years of nuisance could cause to the people working in the building. "Of course this is going to be a nuisance, just the idea of it is going to be a major factor when recruiting and retaining workers."

More understanding
According to several participants, it would be a much better idea to accommodate the researchers elsewhere. That would make for a much more pleasant work environment, not to mention it would enable the university to renovate the Kruyt building faster, cheaper, perhaps even with some radical changes.

That's not on the table, replied Pijpers, claiming that the university has investigated this option, but it's simply "unfeasible" as too many people work in the building. He said he does, however, take the researchers' worries into account.

Pijpers emphasised that the feasibility study was just a first step. Now, the university is going to conduct further research to determine if it's possible to keep all teams working in the building during the renovation works. "I understand that this is nerve-wracking. We definitely have to take a closer look at that".

According to the UU president, the Faculty of Science must now indicate the groups working in the building and what their exact wishes would be in terms of facilities. After that phase, Pijpers hopes that the renovation of the west wing can start quickly. "So that we also have some perspective", he said, finishing his talk. A short applause followed.

Starting over
Looking back on the meeting with Pijpers, Biology Professor Lukas Kapitein said he's glad, if only because the UU president did his best to explain everything clearly this time around.

“It was important for us to make it clear that we had considerable objections to the plan of renovating the Kruyt building with us inside. It looked as though the Executive Board had already decided they would do things a certain way, that everything was already set in stone. Now it's clear that they can't just do that. There's got to be some research first".

Kapitein considers the meeting with Pijpers a good way to start over, with the occupants of the Kruyt building this time being more involved in the planning and the research to follow. "Until then, no one had asked me what all the vibrations would mean for my experiments with microscopes".

Despite Pijpers' refusal, he and his colleagues are still aiming to convince the university to move them to a different building during the renovation works. "We understand it isn't a trivial task, but it's not impossible either".

The meeting with Pijpers has been recorded. You can watch it here (in Dutch). More than 300 UU employees have already watched the video.