The theme of this year&#39;s Anniversary Day (Dies Natalis) is &#39;Curious Colleaborations&#39;: looking past the limits of one’s discipline to discover unique ways of collaborating with others. Psychiatry Professor Jim van Os, from the Utrecht University Medical Center, will be the keynote speaker at UU’s anniversary celebrations on March 25. Drawing from his own experiences, he will provide examples of atypical collaborations.

When Jim van Os first started his Medicine studies in Amsterdam, he already knew he would specialise in Psychiatry someday. “There are two types of psychiatrists: the ones that studied Medicine purely to become a psychiatrist, like me, and those who made that choice already in college. Some say that the first group is more human-oriented, while the latter is more interested in the biological functioning of the brain.”

Psychiatry is the medical discipline dedicated to the treatment of people suffering from mental disorders. It treats illnesses such as schizophrenia and bipolar disorder, analysing how they affect the normal functions of the brain. A psychiatrist can use both drugs and therapy to treat a patient, whereas psychologists stick to therapy, looking to change the patient's behaviour.

Mental illness cannot be measured like a broken arm

However, the distinction between the two is not always clear. “We can’t unambiguously determine what belongs to Psychiatry and what belongs to Psychology. The worlds collide as it is often difficult to pinpoint what the issue is: mental illness can’t be measured like a broken arm. Even when someone gets a diagnosis, it is still hard to predict which drugs and treatments will lead to their recovery. Consciousness works differently for everyone and is dependent on someone’s social environment. If someone is having feelings of fear, is that due to an illness or to traumatic experiences? It’s the interaction between how the brain works and your responses to certain experiences and situations that creates your consciousness.”

Van Os advocates for a human-centred approach to Psychiatry. “In Psychiatry, people have long sought to label diseases. When a patient has certain symptoms, they are categorised as having a certain disorder. Often, that disorder requires a particular treatment or drug. But, by doing that, you lose sight of the mental component. That is harmful.”

The brain functions differently for everyone, depending on the social environment

“The brain functions differently for everyone, depending on the social environment or someone’s history. Has a patient been traumatised by past experiences? Or do they struggle with their family’s demands? All these things can influence someone's mental state, so their personal situation matters when it comes to treatment. I realised this for the first time when studying abroad in Indonesia, Morocco, France, and England. It was perplexing to see how much someone's cultural background influences the diagnosis. Non-Western countries tend to interpret ‘hearing voices’ very differently. But even in countries like France and England the diagnosis and treatment of a disease like schizophrenia can differ.”

Over time, Van Os became more and more resistant to the international lists of recognised mental diseases, the so-called DSM-5. In doing so, he upset many neurological researchers. When he came to Utrecht in 2017, this resistance led to a struggle regarding the direction of UMCU's Psychiatry department. Renowned scientists like Iris Sommer and René Kahn opposed Van Os’ vision. Representing the biological-medical approach, they identified Van Os with ‘the anti-psychiatry of the seventies’. Both of them have since left UMCU and the Psychiatric department now follows the human-centred approach.

“I was pleasantly surprised when then-dean Frank Miedema asked me to come to Utrecht. He is the Open Science guy who wants us to share scientific information openly. He also defends Science in Transition, which is in favour of prioritising societal needs in science. I share that belief. Together with Floortje Scheepers, Professor in Innovation in Mental Health Services, I have been working hard to share information and involve patients in science. Even hospitals are noticeably more interested in the patient’s context. The impact of a broken arm is different for a pianist than for someone less dependent on that arm.”

In some cities, the amount of adults being prescribed antidepressants is higher than twelve percent. That is unbelievable high

By Open Science, Van Os doesn't only mean colleagues sharing information with their peers but also coming up with treatments that adopt a broader perspective than merely looking at the symptoms. When taking the social environment into account, doctors should also incorporate the expertise of sociologists, economists, geographers and environmental experts.

“In some cities, the amount of adults being prescribed antidepressants is higher than twelve percent. That is unbelievable high and we must investigate the cause. Are General Practitioners so busy that they are unable to immediately diagnose a mental illness and prescribe medications accordingly? Or are the adults coming from an environment where the pressure to perform is higher than normal? Or is it due to the high rates of noise pollution in the area? Is social cohesion low?"

“Currently, these cases are regarded on an individual basis, but by researching and sharing these connections, we may get more insight. We look at the mental features of the psychological suffering, and the symptoms are treated with or without drugs. If someone has debts or other societal problems, they will encounter different authorities. That’s what the Societal Support Law is for.

Oftentimes, talking about problems or learning to cope is a better way to treat someone

This critique also emerges in his book The new mental health services (2015), in which he criticises the current organization of the GGZ. He is in favour of a broader approach. “The GGZ does a lot of symptom control. There is too little collaboration with social workers, for instance. This way of working is supremely inefficient, we must unite these different care fields. Oftentimes, talking about problems or learning to cope is a better way to treat.”

Van Os also advocates for a larger role for the patient. “Mental health problems and the social environment are different for everybody. One will benefit from good societal assistance, while someone else needs a spiritual journey, drugs or psychotherapeutic conversations. The vision and wishes of the patient should play a much larger part in treatment, wherever possible.”

More human and less patient is at the core of the Ecosystem of Mental Health, which Van Os has established alongside caregivers and health insurance companies. This Ecosystem offers a form of mental health care where people can ask questions and talk about their complaints in a digital format, either in groups or one-on-one. There is a range of choices people can make with regards to peer contact, social help and GGZ aid. People can chat anonymously or receive guidance from a virtual community related to their questions. Ecosystem employees are social workers, mental health care professionals and people who have experienced the same things as the patients. Several pilots have been started in the Netherlands.

To Van Os, the patient should not only get a larger role in their own treatment but also in scientific research. “I call the experiences of patients experiential science and they are of utmost importance in our field. At UMCU, there is a User Resource Centre, where we use patients’ knowledge to gain more insight into what psychological suffering entails and how we should treat it. We’ve gained some incredibly valuable insights there. For instance, researchers and patients have joined forces to seek the best ways to stop antidepressant use. Alongside the molecular geneticist and psychologist Peter Groot, I’ve developed a tapering strip. This method can decrease drug use step by step, without the patient experiencing withdrawal symptoms. Thanks to three patient studies, we now know what works best.”

Van Os continually looks for new and special ways to collaborate with other scientists, societal bodies and patients, in order to gain more insight into psychological suffering and fitting remedies. “In the past, psychiatry tried its hardest to belong with the other disciplines in ‘real’ medicine. Now the opposite is happening: in the whole field of medicine, there is more attention for societal context and the collaboration with patients, just like psychiatry has been doing for years.” 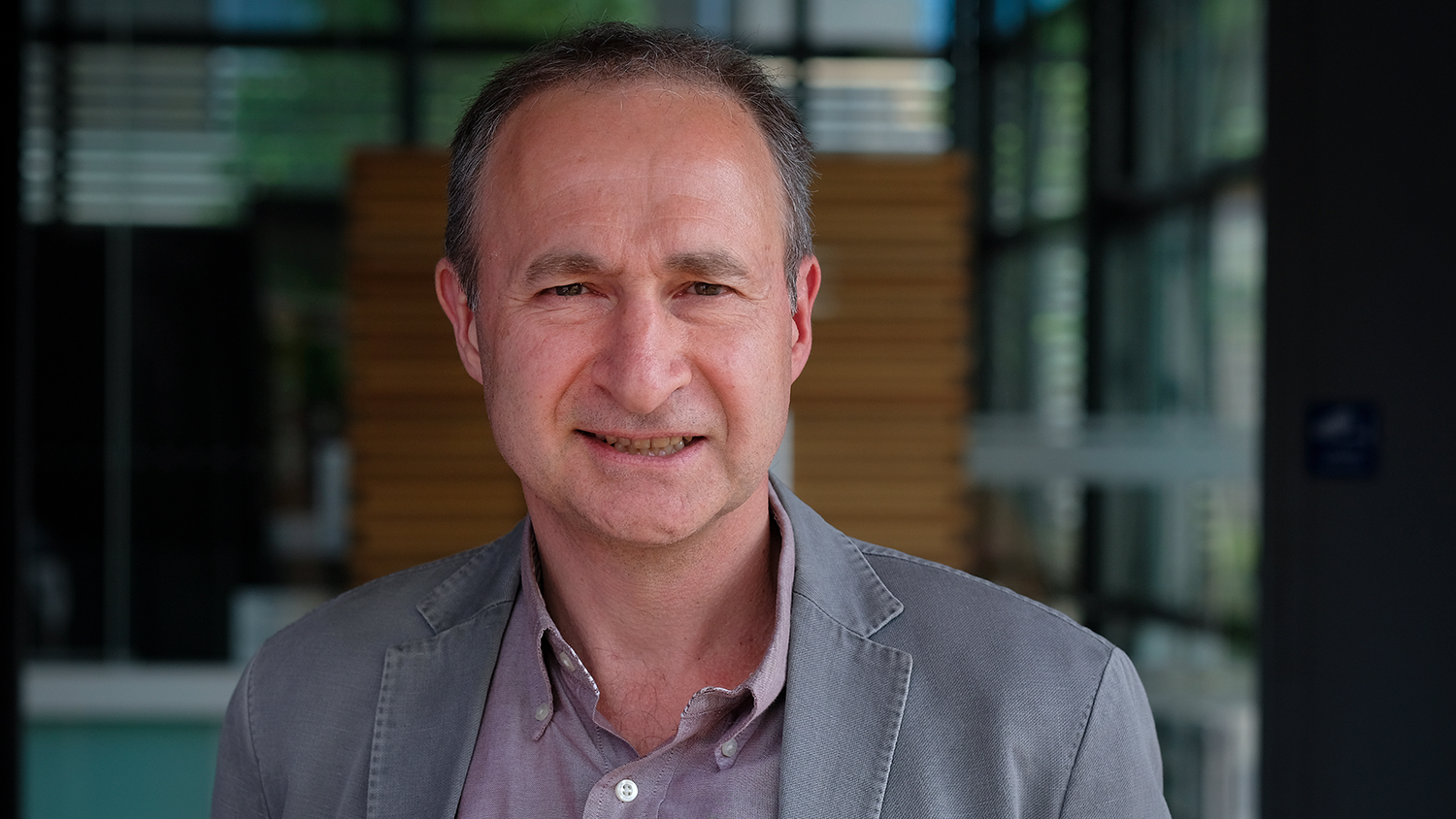 Who is Jim van Os
Jim van Os (1960) was born in Utrecht and studied Medicine in Amsterdam. After his studies, he delved further into Transcultural Psychiatry in Jakarta and lived in Casablanca for a year. He also studied Psychiatry in Bordeaux and London. Between 1991 and 1995, he studied epidemiology at the London School of Hygiene and Tropical Medicine. Following his stay in London, he worked in Maastricht. In 2017, he became a professor at the Utrecht University Medical Centre.

He is a guest professor at the Institute of Psychiatry at King’s College London, where he was appointed King’s College Fellow in 2016. Van Os is a member of the Royal Netherlands Academy of Arts and Sciences. He is mentioned in the Thomson-Reuters Web of Science list of ‘the world’s most influential scientific minds of our time’.

He is one of the figureheads of the ‘new GGZ’ movement, as well as one of the founders of the website and eCommunity PsychoseNet.nl. In November, he published the book We are not God, which he wrote together with experience expert Myrrhe van Spronsen.