Queen Máxima of the Netherlands made a surprise visit to the Koningsberger building on Tuesday to see how the university is coping with corona. She talked to corona coordinators, students and teachers, who were honest with her: “It’s a marathon. We’re trying our hardest to do everything the best way we can, but we need some prospect.” Supporting international students is especially important at this time.

Last Tuesday, students sat for hours on end in a room in the Koningsberger building, waiting for a mysterious guest to arrive. Teachers sat in another room. They’d heard the mayor would stop by to talk to them about studying and teaching amidst a pandemic. Shortly before the meeting started, the truth came out: it wasn’t the mayor who was coming to visit, but rather queen Máxima.

Utrecht University was asked a few days prior whether queen Máxima would be welcome to visit the campus, as the royals would like to be informed about day-to-day university life in the time of corona. How do students handle the crisis? What do online classes mean for the teachers?

Everything was taken care of secretly. A representative group of students and teachers was invited, but they were not allowed to know who they’d be meeting – hence the ruse of telling them that the mayor was coming.

Visiting a practicum session
UU President Anton Pijpers was the meeting’s host. He welcomed the queen just after 1pm. She stopped at the entrance to speak with two corona coordinators, also known as cocos. “I’m happy that students are allowed in the building,” coco Ellen Witteveen told the queen. “It makes you feel like at least we can relieve some of the students’ burden.” 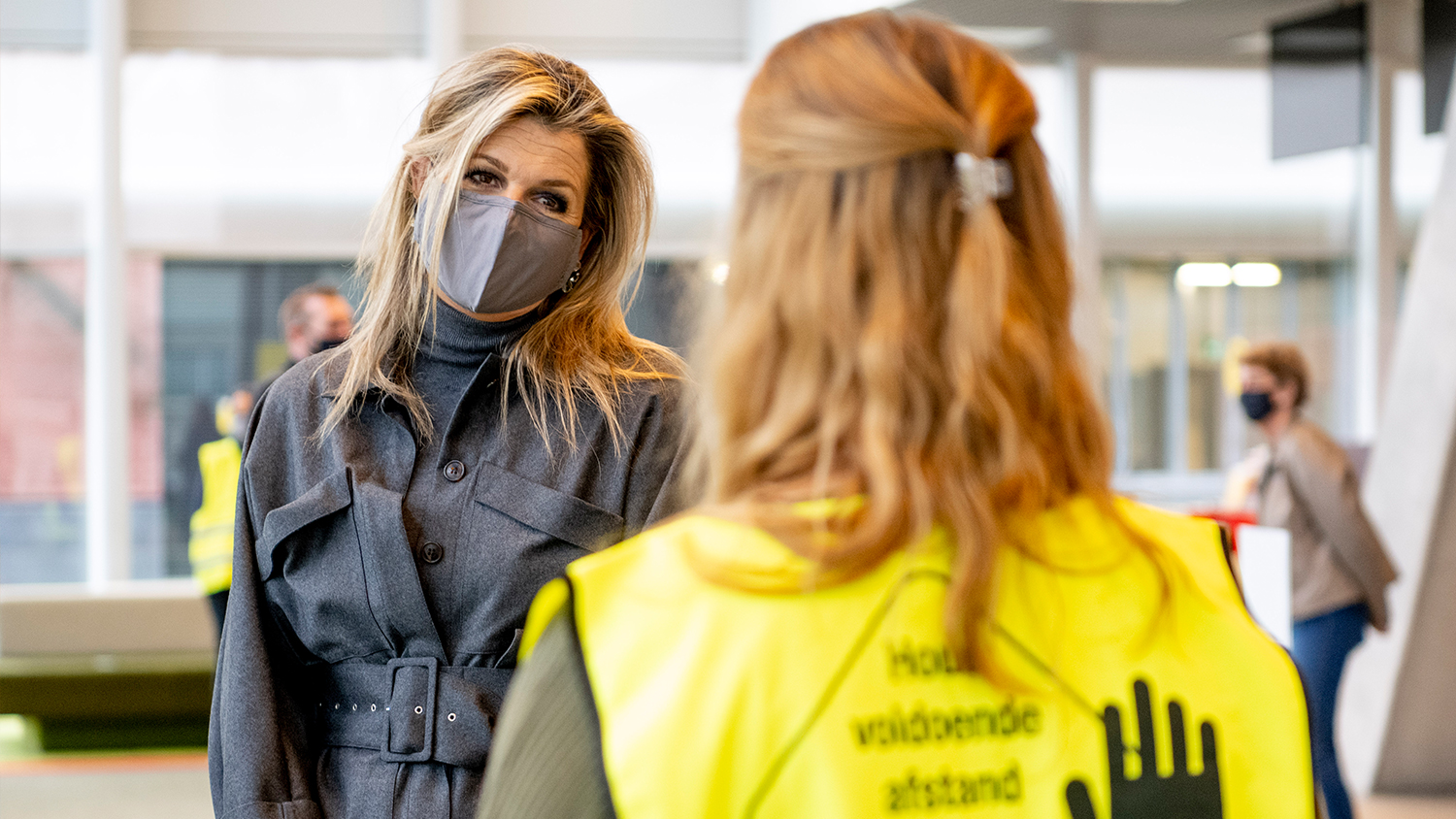 “We’re lucky we’ve got this session,” said Bas van Leeuwen (20), one of the biology students in the practicum session Máxima visited. The students also made clear that studying during the pandemic is no fun. Take Bas, for example. Before the summer, he was living with his parents in Woerden, but decided to move out because of the lack of contact with fellow students. He ended up at the IBB, in a 15-person unit. “But that means you’re in a home with a lot of students, which is a problem during corona. We didn’t know what we could and couldn’t do together. What kind of behaviour would mean breaking the rules? It wasn’t easy.” Now, he’s moved to Zuilen and lives in a student home with six other students. “It’s more manageable.”

Bas served as chairman of the Utrecht Biology Association until November. He told the queen that there was very little he and his board could do after the pandemic broke out. Speaking with his successors in the association’s room, Máxima inquired how they are handling the situation now. “We’re limited to organising online activities like pub quizzes, an online escape room, or virtual coffee chats,” replied the current chairman, Machiel van Halteren. 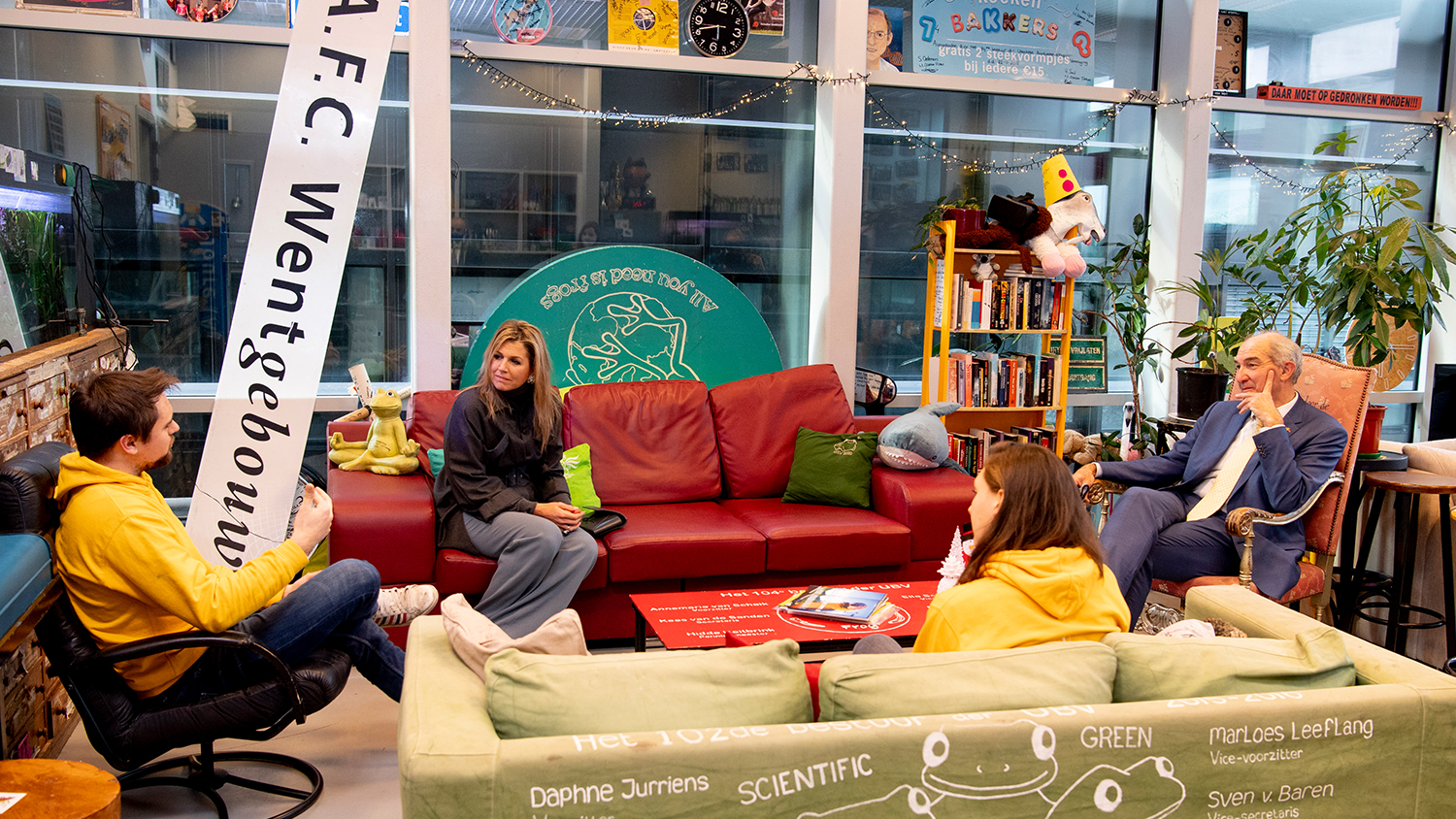 Students need social contact
The queen also chatted with students about their mental wellbeing during the crisis, and they confided that they need social contact. “We’re kind of fed up,” said Denise van de Sant, President of the National Chamber of Associations and former Bachelor’s student of Social Sciences. Sometimes, they cannot avoid it. “Students just have a lot of social contact. I live in a house with nine students. If anyone gets infected, all of us have to quarantine.”

Máxima also wondered how students feel about often being blamed for the second wave of the virus. “That’s completely unfair,” Denise said. “It’s not really our fault. Associations are trying hard to adhere to the rules as much as possible while still offering students some form of socialisation. So one of the associations organised a livestream with a DJ for students to dance at home.”

UU president Anton Pijpers agreed that the Utrecht associations have been behaving in an exemplary manner, but, when newspapers publish stories about students partying on a disco bus, that’s what people tend to focus on.

Freshman student Thomas van Asperen also stressed that physical contact is necessary for students. He’s just started his studies in Natural Science & Innovation Management and laments having met few people so far. “This should be the time for making friends, but it’s nothing like that. I have a class on campus once a week and that’s it, then I go home again. I would like to live in student housing, but I can’t afford to, so I rarely meet people. I’m constantly thinking about what’s expected of me.”

Students also report that it’s becoming harder and harder to separate studies and private life. Aukje de Ruiter, student of Pedagogical Science and board member of national organisation the Interstedelijk Studenten Overleg (ISO), is noticing this phenomenon among fellow students. “We’re constantly on our phones. The boundaries between studies and relaxation are blurring. That’s tricky.” Thomas agreed: “I’m going square-eyed from all the screen time.” 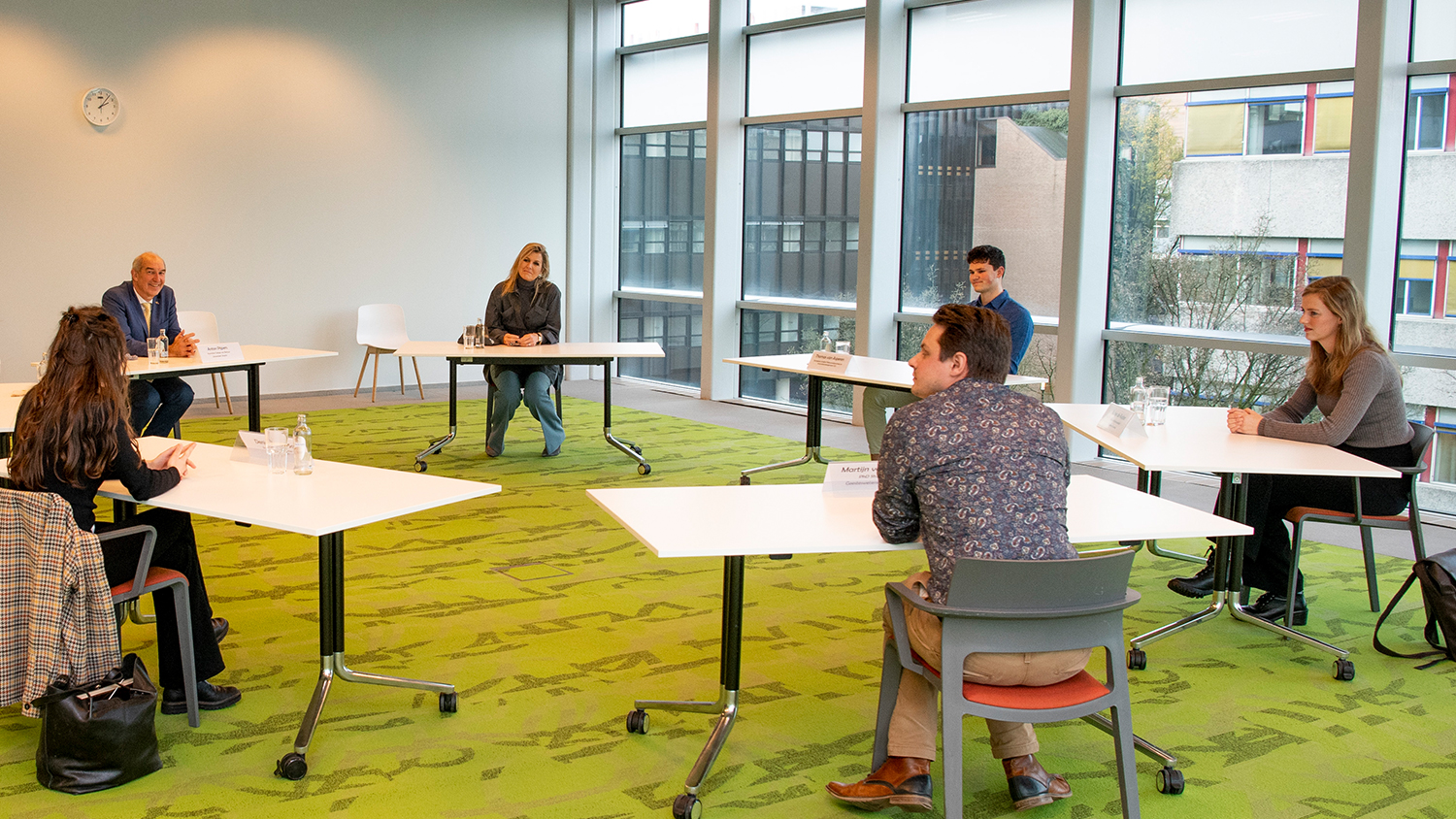 Fear of Missing Out
“We’re worried about the students we’re not seeing,” said Psychology student Kirsten. “By focusing more on guidance, we’re trying to get a clear idea of the students who are falling by the wayside and wasting away. The tutors should have that overview and refer them to us, but we don’t have a complete picture. We’re especially worried about international students, who don’t have secondary school friends or family to fall back on.”

The queen asked them about their expectations for 2021. “This situation cannot last much longer. We won’t make it. Give us some prospect,” complained Denise from Chamber of Student Associations.

Máxima said that last year’s most pressing issue was the Fear of Missing Out (FOMO), whereas now students’ main concern is making enough friends. “A lot of students are struggling with loneliness,” Aukje from ISO said. “It proves the importance of connection in education. Students need physical contact.”

International classroom
Teachers expressed similar worries when talking to queen Máxima in another room. Colleagues from the universities of Wageningen, Eindhoven, Twente, and Maastricht joined the session online. Although they all acknowledged the positive sides of digitisation, they still find in-person education necessary. “Digitisation has already been a trend in education for quite some time,” said Manon Kluijtmans, Director of the Utrecht Centre for Academic Learning. “That’s what saved us in this situation. But we’re also seeing that teaching exclusively online isn’t good either.” 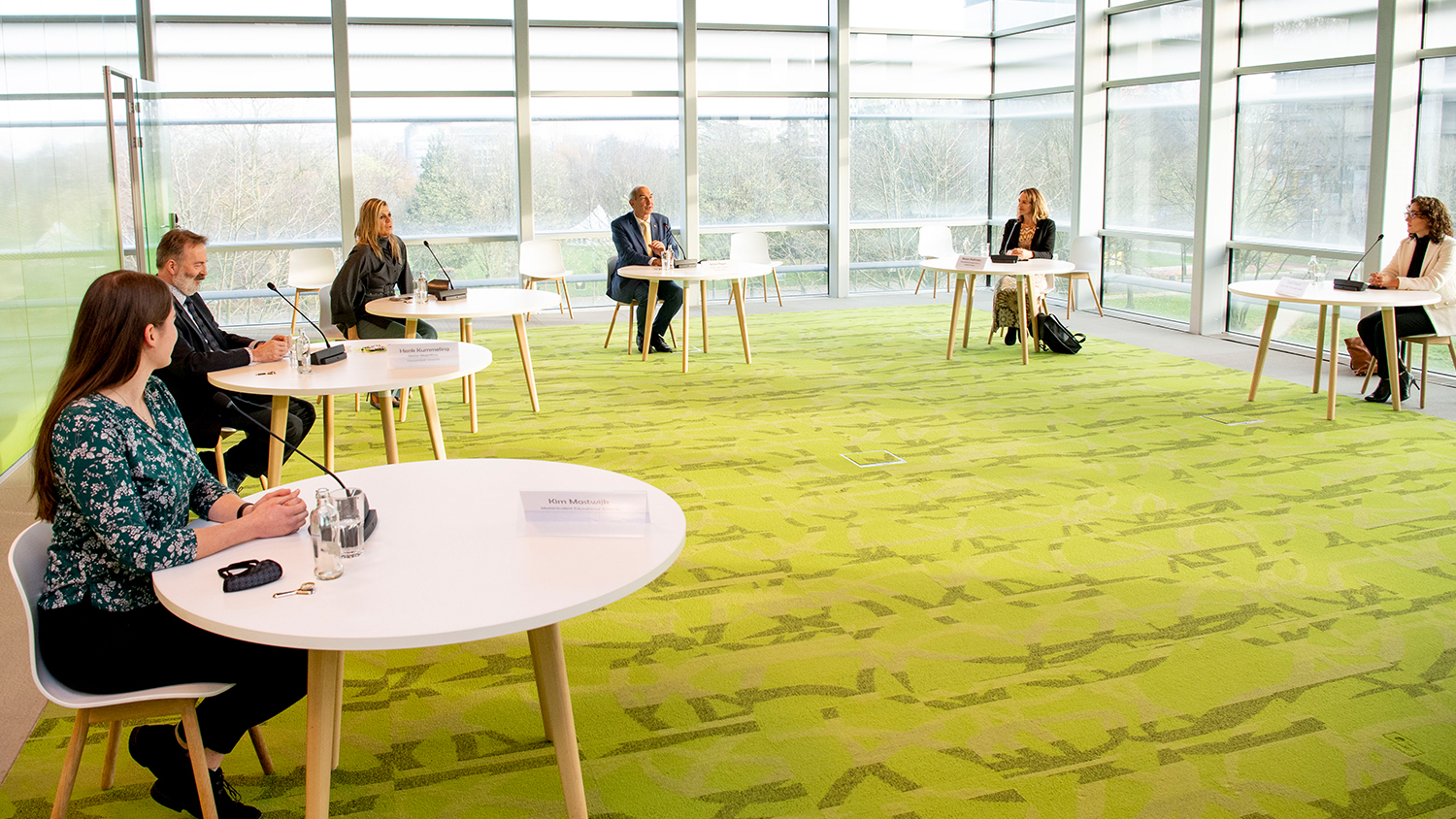 Educational advisor Barend Lust, from Maastricht University, agreed. “We no longer have a moment to chat with students. Normally, we’d stick around for a bit after class, but now that’s something we consciously have to make time for.” Kim Schildkamp from the University of Twente said it’s remarkable that international students seem to have an easier time speaking in online classes. “They normally don’t raise their hand that often, but they do speak up in online chat groups.”

Barend Lust noted that international students living elsewhere want to return to Utrecht as soon as they can, despite the pandemic. They want to be on campus as often as possible.

One of corona’s biggest downsides is that the opportunities for international connections have been reduced. That holds true for conferences, but also for students who want to study abroad, not to mention those interested in coming to Utrecht. “We’re focusing more on virtual international classrooms right now,” said Rector Henk Kummeling, who joined the session. “This way, students from Utrecht can get to know students from other parts of the world. It also makes possible for students from, say, Africa to have an easier time joining our educational activities.”

The queen wondered whether this creates a group of second class students. Kummeling replied that that’s definitely not the intention and stressed that virtual classes are of high quality. “It’s more about offering the option to go to university to students who wouldn’t have such an opportunity otherwise because of their finances.”

Marathon
Máxima also wanted to know how teachers are doing. Silence. “Teachers worked with fervour after the lockdown,” Manon Kluijtmans started. “But it’s becoming harder and harder for them. It’s becoming a marathon. Teachers want to keep their education at a high quality level, but they have to invest a lot of time and effort to ensure that. Too much, sometimes.” 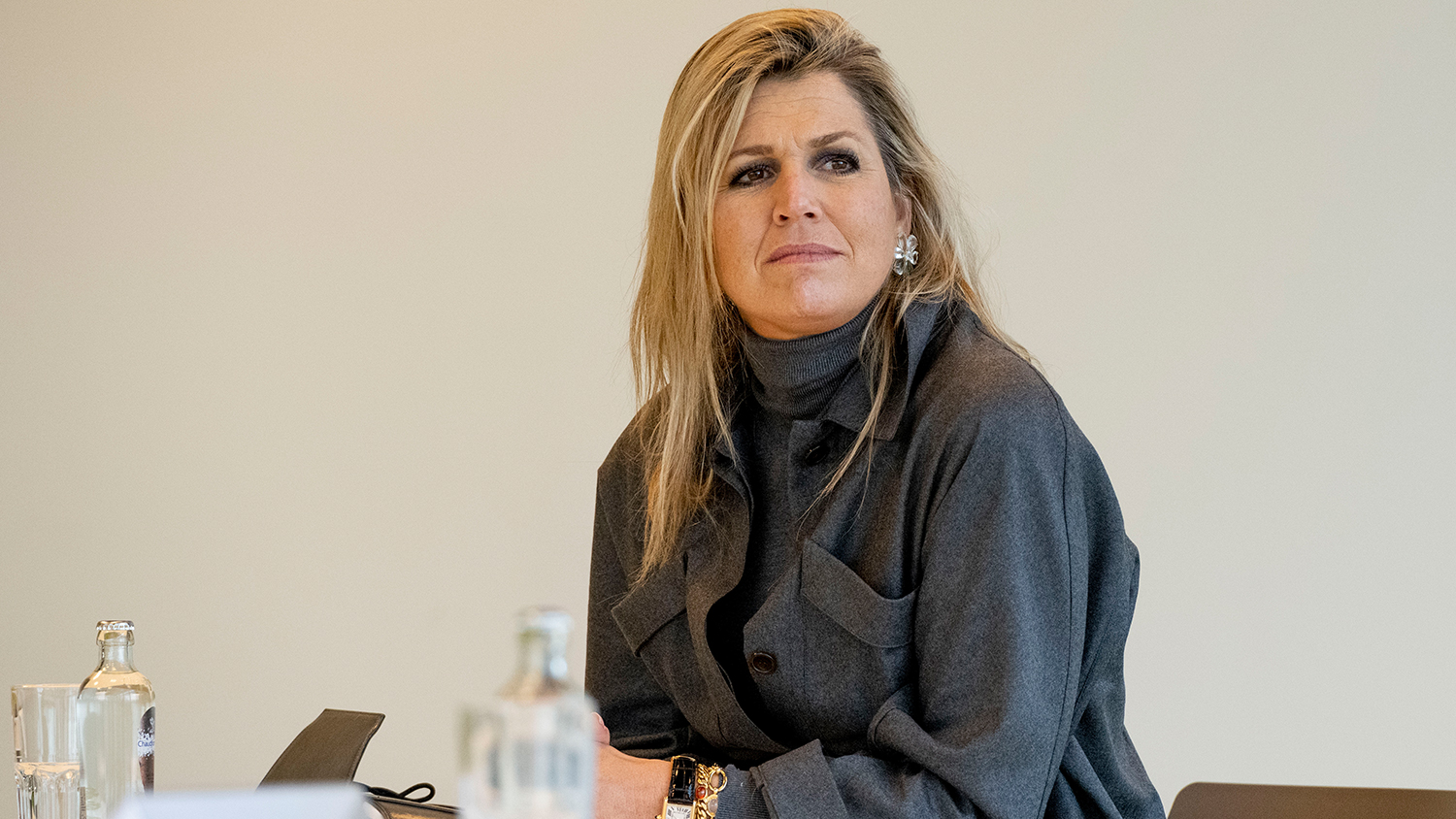 “We’re happy that the university is appreciating teachers more and more,” said Gönul Dilaver from Biomedical Sciences. “As a result, teachers are looking for creative solutions.”

Rector Henk Kummeling said he’s pleased with teachers’ work. “They’re doing the best they can to keep the education at a high level, and that’s great. But it’s also a pitfall. For teachers, it means an accumulation of efforts, but there’s got to be a limit somewhere. As managers, we have to be very aware of that.” 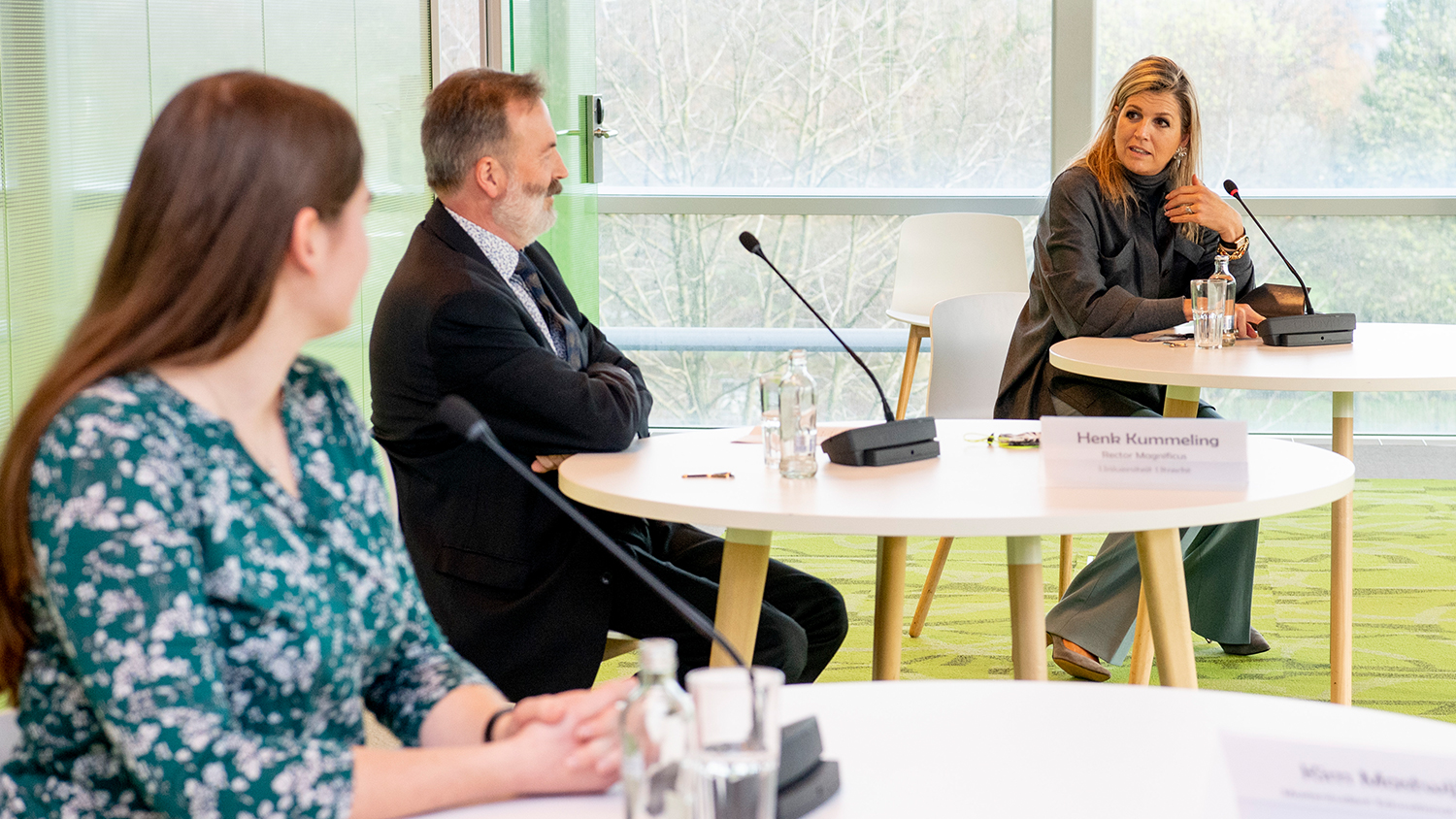 Máxima showed that she was well-informed about the situation, saying she read that students’ performances are better than expected. “We’ve noticed that students are taking a little more time for their studies,” said Perry den Brok from Wageningen. “They’re not allowed to go out, so they have nothing else to do.” That may be cause for concern in the future. What happens, the queen wondered, when everything’s allowed again? One of the teachers mumbled: “I hope students aren’t going to party for two months straight and forget about their studies.”