YouTuber Milo: ‘it’s still odd when I find out a classmate watches my videos’

Milo records his YouTube videos in his room in Utrecht.

Language & Culture student Milo ter Reegen (21) has a peculiar and well-paying job next to his studies at UU. With hundreds of thousands of subscribers on his YouTube channel, making videos is actually his main focus. “I do study, but if I had to choose, I’d choose YouTube.”

Born and raised near Gouda, Milo has been living in Utrecht for a few years now. He joined Utrecht University as a Communication and Information Sciences student, but dropped out because he was spending too little time on his studies and consequently failing the courses. Now, he’s in his second year of Language & Culture Studies (TCS in the Dutch acronym) and his grades have improved. “But it’s still difficult to combine the university with my YouTube work. During exam periods, I try to focus on my exams, but if there are things scheduled for YouTube that I just can’t get out of, they do come first,” he explains.

During any given week, he’ll spend 70 to 80 percent of his time working on YouTube – perhaps 60 if it’s an exam week. “But I won’t drop below that 60 percent so easily, no matter what week it is. The tricky thing is: the work never ends. I think everyone who’s self-employed can relate to that, especially if you’re in a creative industry. You’re always working on it, either in practice or in your head, trying to come up with new ideas.”

Milo has been making videos for several years. “I started out in secondary school, around 2013 or so. But my videos weren’t really good back then, I just enjoyed messing around with it. It became more serious in 2016, and now things are going pretty well.” His YouTube channel, Milo (in Dutch) currently has around 215,000 subscribers. His other channel, Bankzitters (‘Couch sitters’), which he runs with four other guys, has nearly 400,000. Their most popular video is a music video called Niks (‘Nothing’), which has over 4 million views. “That’s pretty huge by Dutch standards.”

Both channels publish new videos around twice a week. For his own channel, Milo mostly makes gaming videos, playing football game Fifa in particular. As for Bankzitters, the content is diverse, but never about gaming. “It can be anything, really. We’ve got a few music videos online with our own original songs, but we also made a huge hot chocolate a while ago. We used a rain barrel and several boxes of Nesquik and such. It can be the most random stuff, but people like that. It’s less of a niche than gaming. You either like gaming or you don’t. But, on Bankzitters, there’s a fun video for everyone.”

Milo records the videos for his own channel in his dorm room, which is then filled with large filming lights and camera setup. “Apart from that, it’s not a special room or anything. I just have a bed, a closet, a desk, and that’s it.” He has two housemates, a boy and a girl. “The boy had seen some of my videos before I moved in, so he doesn’t think it’s out of the ordinary that I record videos at home.”

He doesn’t have to announce that he’s going to record a video for his housemates to know that they shouldn’t walk in. “If I’m recording, you can hear it. You have to be a little more enthusiastic on camera than you normally would. Sometimes, I’ll walk into the kitchen and tell them in advance, but they usually know anyway.”

Sometimes, Milo meets people at the university who are already familiar with his videos. “That’s still weird to me. When I started my studies, there were plenty of guys who told me they already knew me. Or not. So you just start a conversation with someone sitting next to you in a lecture hall, and after a few weeks of chatting every day, it turns out they've been watching your videos for five years. Yeah, that’s odd.” 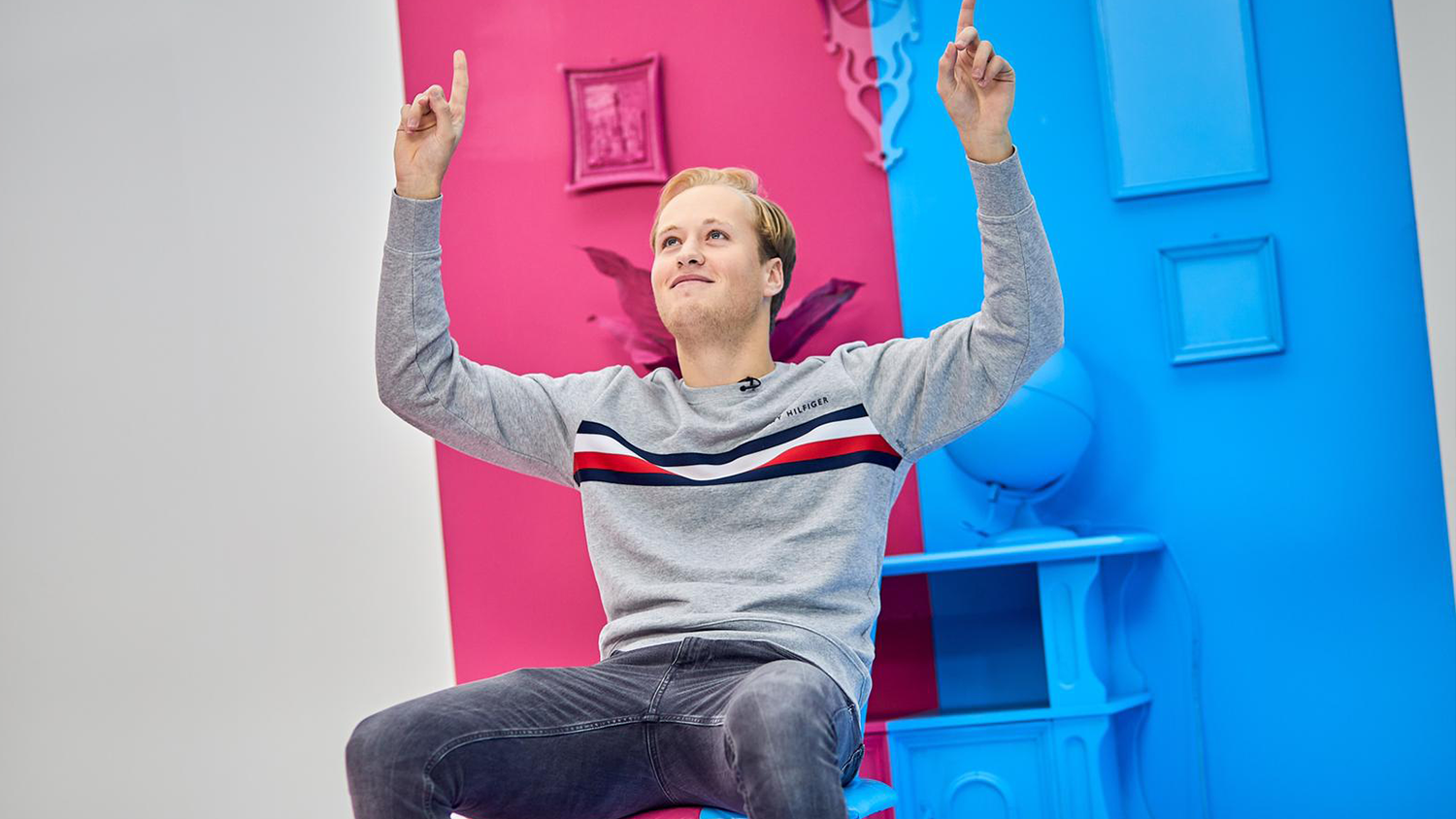 For the TCS programme, Milo is now also taking media-related courses that he could have taken at Communication & Information Sciences as well. Sometimes, his YouTube career is addressed in class. “I do see some similarities between what’s talked about in the study materials and what I already know from practice. Teachers are sometimes curious about my story, instead of just the other way around."

After his Bachelor’s, he’s probably going to say goodbye to student life. “YouTube is becoming more and more work, so a Master’s just isn’t going to happen. It’s already hard to combine work and studies. I thought it was important for me to study something, so I would have something to fall back on, because you never know how a YouTube career will go. However, if I had to choose between the two, I’d choose YouTube. Definitely.”

Milo has never had any other jobs. He worked on his YouTube channel after school, teaching himself how to record and edit. Today, he outsources some of the tasks, such as editing and designing thumbnails. For the curious readers, we know what you're wondering, and the answer is yes, you can make a decent amount of money from a YouTube channel. Advertisements and sponsored content make up the bulk of Milo's income. “My monthly income can fluctuate a lot. But let’s say a bad month is a few thousand euros, and a good month several thousand euros”.

He thinks he's lucky he started his YouTube career so early. “The market was so small back then. If you’re starting out now, it’s much harder to find an audience. Channels are so professional these days… Sometimes there are entire companies behind the channels. Back in the day, everything was just crap.” It can take a long time before your channel starts to grow, but things can pick up fast -- if you go viral once, “it’s a bit of a snowball effect.”

'It doesn't matter whether the camera’s on or off, we don’t communicate differently at all'

Milo doesn't intend to make videos in English. “If you create content in English, your potential audience is bigger, but so is the competition. Besides, the chemistry and interaction we have is really important, and it’s a lot trickier to show that in a second language.” Vlogs (videos in which a YouTuber films their daily life) aren’t a fixed part of Milo's repertoire, but sometimes the boys of Bankzitters do make behind-the-scenes vlogs. “I have a lot of respect for people like Enzo Knol, who can create daily vlogs out of nothing, but that’s not for me.”

Milo says the bulk of his viewers are teenagers aged between 12 and 18. Most of them are boys. “Boys probably form around 80 percent of the audience on my channel, and 60 percent on Bankzitters.” But he claims not to adjust his content for this target group on purpose. “The videos where I’m playing Fifa just attract an audience of under-20s and gaming is more popular among boys. But my jokes aren’t less vulgar than usual or whatever. On Bankzitters, it doesn’t matter whether the camera’s on or off, because we don’t communicate differently at all.”

'People appreciate it when you try to push the boundaries'

Because of his unfiltered content, Milo has received his fair share of criticism as well. Both in his own channel and on Bankzitters, he likes to push boundaries, regardless of the young age of his audience. It’s all under the guise of humour and satire, but when do things go too far? “Well... On Bankzitters, we once created a Tinder account with the five of us. Then we asked women which of us five they would date first. Pretty vulgar. Afterwards, there were women who saw themselves in that video and didn’t like it, even though they didn’t actually say anything wrong. But, yeah, they didn't appreciate the fact that they were suddenly exposed in a video like that.”

Milo has recently deleted some of the videos from his channel due to misogynistic jokes. For example: in a skit with fellow YouTuber Frank van der Slot, Milo said that women weren’t allowed to have an opinion, and that you could force them into certain sexual acts. Didn’t he think then that he was taking things way too far? “It was just satire. But yeah, there’s a reason they were taken offline,” he says.

Still, if the decision was up to him alone, the videos would still be online. “We thought those videos were really funny to make, and the responses we received show that other people thought the same. They were in the top-five of most-watched videos. If people don’t like it… Well, you can choose not to watch it, right? We did expect some people to get angry, but the videos were eventually picked up by some big names in the media, which led a lot of people to complain on Twitter. TV host Tim Hofman, for example, said a few times that they were misogynistic. If it had been completely up to me, I wouldn’t have let myself be swayed, and the videos would still be online. But, since that could also impact the Bankzitters channel, in the sense that perhaps some companies would no longer want to work with us, I decided to delete those videos.”

Milo doesn’t regret making those videos, then. In fact, he thinks it’s problematic that everyone "gets offended so quickly" these days. “A lot of YouTubers and media personalities are already censoring themselves. I’ve been doing that too, more than I was a year ago. But I do think people appreciate it when you push the boundaries. And that should be allowed. It’s important. I don’t see myself as some kind of resistance fighter or whatever, but I’ll keep making those jokes. Of course there are limits. Snapking's videos, for example, I think those go too far. Him going to a McDonald’s and shouting profanity at an Asian employee, that’s ridiculous. That’s no humour.”

Is Milo afraid his old tweets will ever catch up with him? “Nah. If they’d existed, they would’ve been found by now.”

(Editor's note: Snapking is a Dutch YouTuber who was sent to a youth detention centre in 2019 for making a sex tape with an underage ex-girlfriend and publishing the video online. His channel mainly included pranks. In one of them, he harassed a Chinese McDonald's employee using racial and sexual slurs)

Tags: side job | faculty of humanities