Milestone: one in four professors in the Netherlands is now a woman

A quarter of the professors working at universities in the Netherlands are women, the latest figures reveal. Most universities have achieved their targets.

It’s been a long way coming, but the upward trend is clear. In 1998, only 6 percent of full professors were women. Today, the number is 26 percent, about four times as many. The number of female associate professors has also quadrupled to 31 percent.

Five years ago, Dutch universities set targets for the year 2020. Most have managed to surpass their own goals. Only Wageningen University & Research, Tilburg University, and the University of Amsterdam fell short.

At the time, the target figures caused some controversy. Should universities aim high and accept the risk of failing, or is it preferable to make realistic estimates, running the risk that institutions would make it too easy for themselves?

The Dutch Network of Women Professors (LNVH) was satisfied with the targets, as they found that the targets would keep the focus on the problem of women failing to get ahead in academia. That’s why LNVH asked tuniversities last year to set new targets for 2025. These targets call for nearly one in three professors to be a woman by 2025. 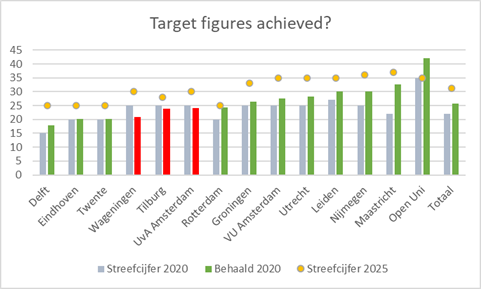 Maastricht University and the Open University, with 33 and 42 percent respectively, have the highest number of female full professors compared to the other institutions. At the bottom of the list are the four technical universities.

While it’s true that Eindhoven University of Technology ranks low, the number of female faculty are growing at a fast rate there: in five years, the proportion of female full professors doubled from 10 to 20 percent. This university caused a kerfuffle in recent years with its affirmative action policy prioritising women, which some thought went too far.

Only Erasmus University Rotterdam outperformed Eindhoven’s growth. The proportion of female full professors there rose from under 10 percent in 2015 to more than 24 percent in 2020, an increase by a factor of 2.5. 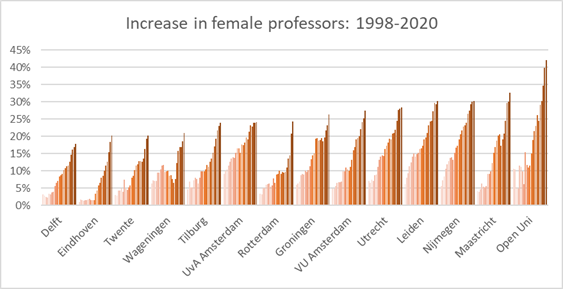 It is worth noting that the number of female professors rose at all universities over the past year, even if you have to look behind the decimal point to see these results for Nijmegen: the gains from 2019 to 2020 only came to 0.05 of a percentage point.

What will the future look like? With an average growth of one percentage point per year, the national target of 31 percent for 2025 looks feasible. At this rate, however, it will take another 24 years before the number of female full professors equals that of their male colleagues.