The low-rise part of Van Unnik will be demolished in the coming months. Photo: DUB

The dismantling of the iconic Van Unnik building in the Utrecht Science Park has now finally begun. The low-rise part of the building will be completely stripped and demolished. It is possible that a study garden will be built on this spot. The high-rise will then be redeveloped and may be given an extra floor.

It is clear that the works have begun: scaffolding has been placed around the low-rise building, workers are busy, and the bicycle racks next to Casa Confetti can no longer be used.

In the coming months, the low-rise building will be dismantled in a sustainable manner: everything that can be reused will be reused, such as doors, hinges and locks, lighting, ceilings and walls. These materials will be given a second life in other buildings. Fiona van 't Hullenaar, Director of Vastgoed & Campus, describes what's going on now as "the harvesting phase". 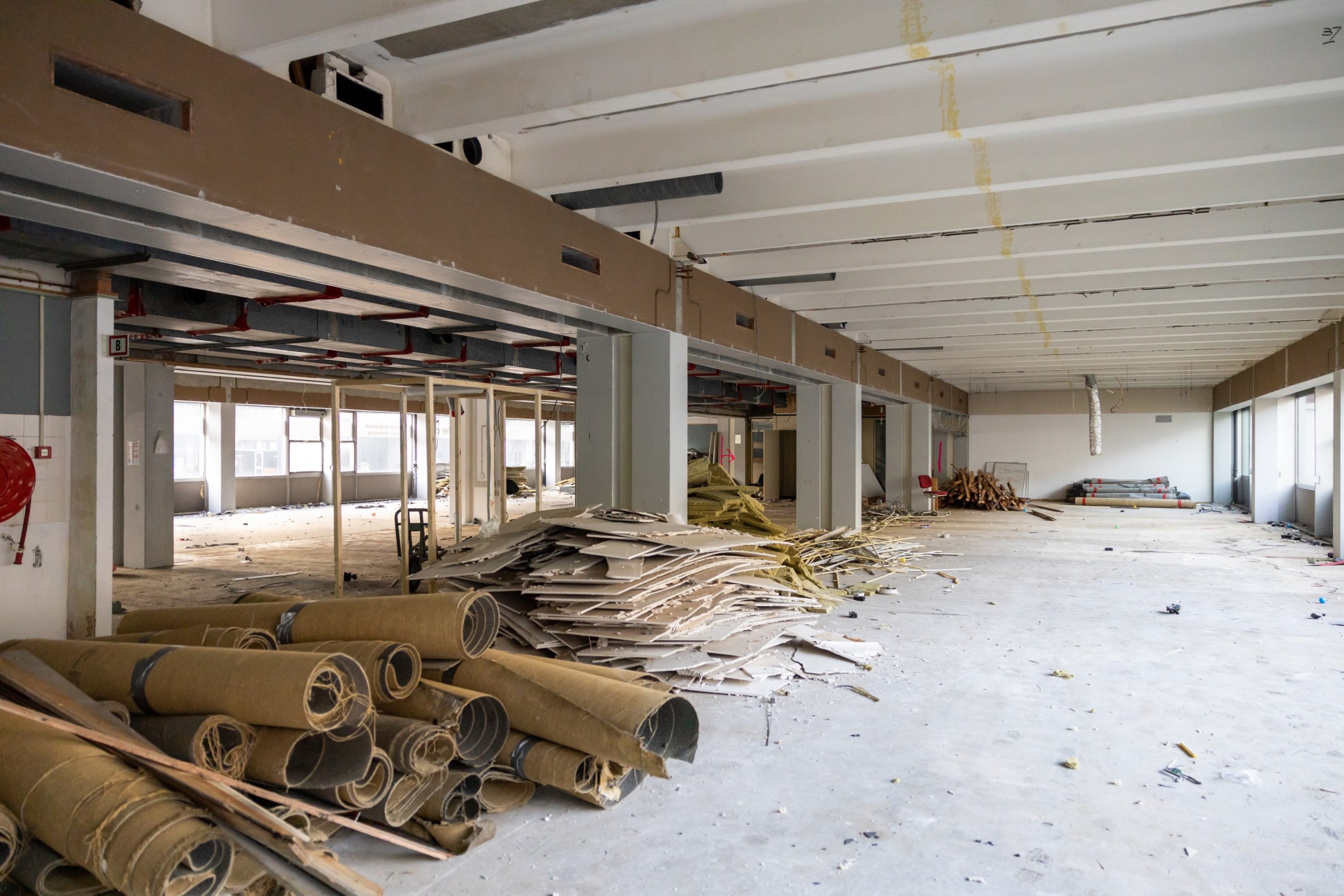 Dismantling the inside of the low-rise building. Photo: Dick Boetekees, UU

Materials that cannot be reused, such as flooring and wood structures, will be disposed of. The asbestos present in the building will also be removed with care. The bridge between the low-rise and the Ruppert building disappeared in the end of December, with people walking around in protective white suits to remove asbestos. The bare concrete skeleton that remains will be demolished in the new year. The dismantling and demolition of the low-rise is likely to be completed in May.

Nuisance
Work will continue as usual throughout the lockdown, with the exception of weekends and public holidays. The tram will continue to run and the research, education, and exams that are still taking place in the Ruppert building should not be affected by the work either. According to Van 't Hullenaar, agreements have been made with the contractor to minimise vibrations and noise pollution. 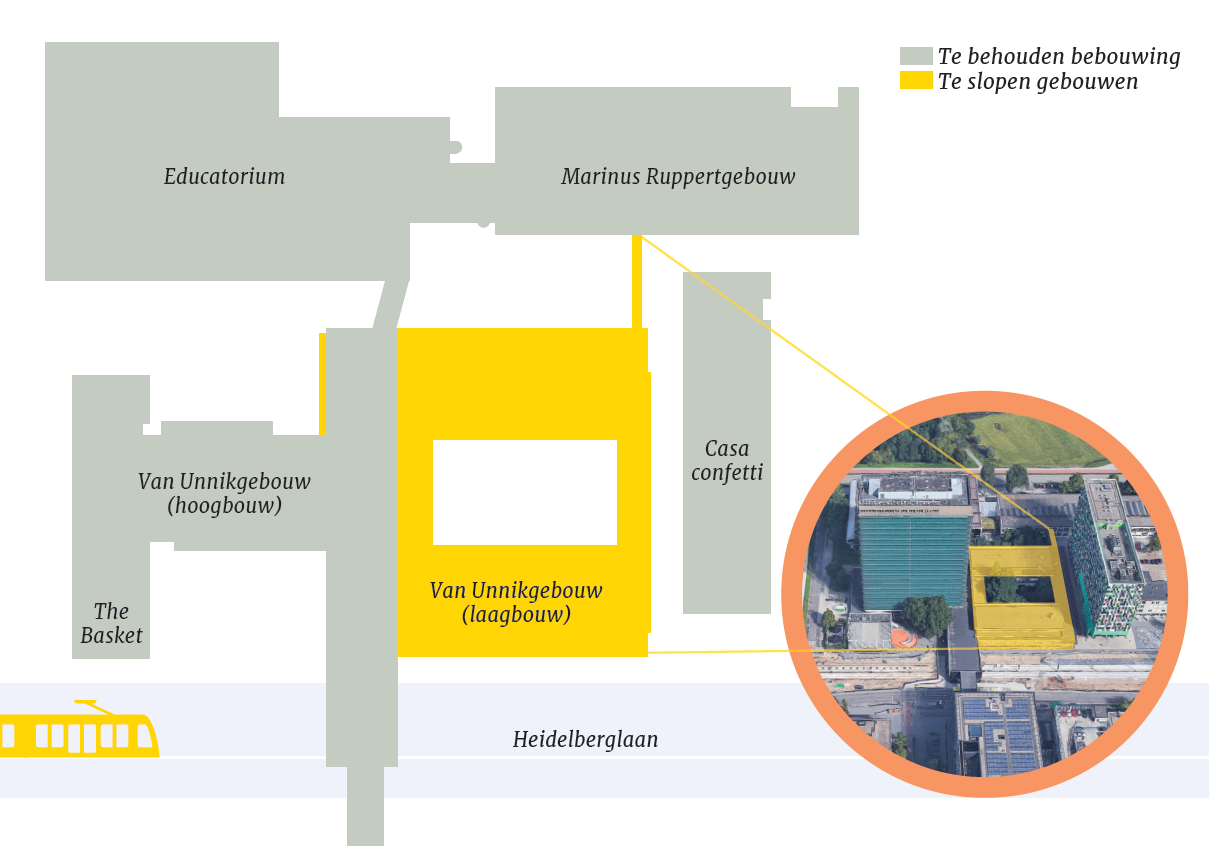 The bicycle cellars of Casa Confetti and those below the Educatorium remain accessible. However, residents of Casa Confetti may experience some nuisance. "But we keep them well informed of what's happening and they can come to us with questions and reports”, reassures Van 't Hullenaar.

In recent years, occupants of the flat have suffered more frequently from construction work, for example due to the construction of the Uithof tram line and the redevelopment of the Leuvenplein. At the time, they were dissatisfied with the communication about the works.

Future vision
On the site of the low-rise part of the Van Unnik building, there may be a study garden in the future, according to the recently announced plans for the Utrecht Science Park, titled 'Urban Vision USP'. The high-rise of the Van Unnik building will remain in place, but it will be thoroughly renovated. An extra floor may be added on top, as stated in the vision plan. In that case, the office building would once again be the tallest one on campus - an honour now held by the RIVM's new building.

The part of the building that now houses restaurant The Basket, at the bottom of the building, will remain. But the restaurant itself will disappear, at least for the time being. It is not yet clear what will occupy that space. In the vision plan, this part of the building is described as an 'eye-catcher' because of the striking architecture and the basketball court on the roof. Whatever the exact interpretation, the location will be given a 'public function' with the aim of bringing more life to the area.

Carlijn van Campenhout, communication advisor at Vastgoed & Campus, emphasises that these ideas have not yet been set in stone. "The Urban Vision is a framework for the design of the USP, but the actual development still depends on all sorts of factors.” For example, there will be participatory meetings to brainstorm about the concrete implementation of the plan. 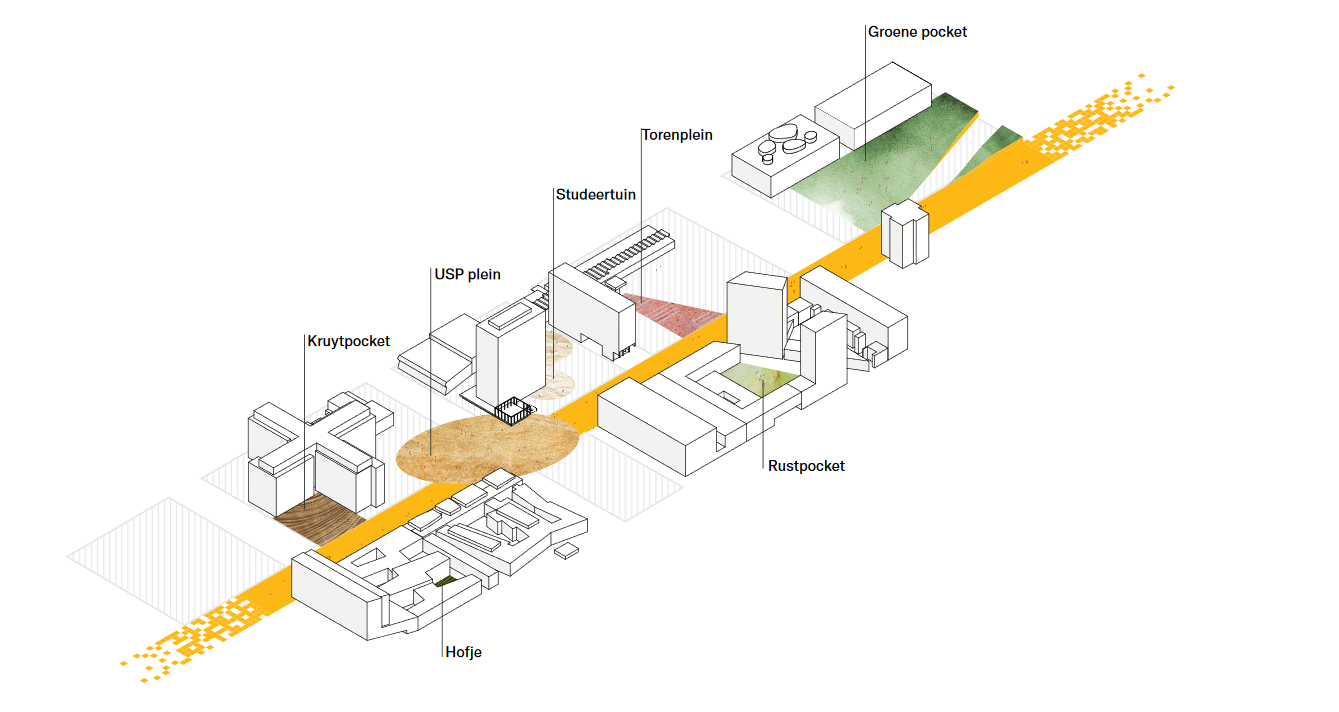 Iconic colossus
For years there has been discussion about the future of the 'iconic colossus' in the heart of De Uithof. In 2009, former rector magnificus Bert van der Zwaan already argued that it would be better to place a bomb under the Van Unnik building. It was suggested then that the building should be converted into a student flat. Most of the floors have been vacant for a number of years as a result of asbestos problems and poor climate conditions. The Willem C. van Unnik building is one of the oldest buildings in the USP, built between 1967 and 1969 and designed by the architects Lucas & Niemeijer. At 75 metres, it was also the tallest building in the area. Now, the new 76-metre RIVM building is the tallest.