Compared to last year, the proportion of PhD candidates who are offered a contract for less than 4 years or only a part-time appointment has not decreased, says the Promovendi Netwerk Nederland (PhD Network Netherlands). TU Eindhoven hardly works with ‘dubious contracts&#39; at all, in contrast to the Amsterdam VU, which tops the ranking of dubious contracts. Utrecht University is in 5th place.

PhD candidates at Dutch universities should be employed full-time for four years. This was laid down in the collective labour agreement in July 2018. The proportion of contracts among PhD candidates where this is not the case has fluctuated between 10 and 15 percent in recent years. This was still no different in 2019, according to the new employment conditions monitor of the Promovendi Netwerk Nederland (PNN; PhD Network Netherlands). For the monitor, they studied all vacancies for PhD candidates published on the website of Academic Transfer. In 2019, these were 1872, of which 1387 were offered by a university.

Dubious contracts
Of the 1872 vacancies at Academic Transfer, more than 12 percent consisted of dubious contracts: these are contracts with a duration of less than four years or four years but whose appointment is not full-time. The differences between universities are large, according to the PNN. At Eindhoven University of Technology, for example, only 1.5 percent of the contracts offered are dubious. There is room for improvement at the Vrije Universiteit Amsterdam (20.3%), the University of Groningen (20.2%) and the Erasmus University Rotterdam (19%). Utrecht University is in fifth place after the University of Twente with 15%.

In order to gain more insight into how bad contracts at institutional level are, Table 5 shows the proportion of dubious contracts per university. 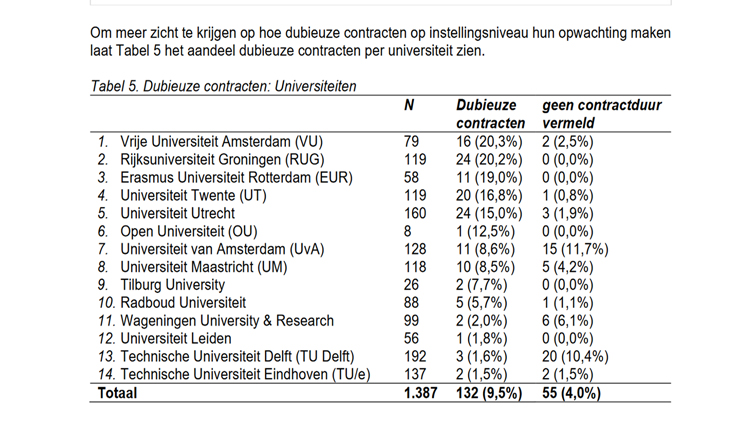 Table from the Monitor Arbeidsvoorwaarden Promovendi 2019, N is the number of vacancies studied on Academic Transfer.

Teaching tasks
In addition, the vast majority of vacancy texts for PhD candidates are still far too vague when it comes to terms of employment, according to the monitor. Not all of them mention how long the appointment lasts, how high the salary is, and whether the PhD candidate has to teach.

It is the first time that the monitor also shows differences between institutions. "Universities love rankings," says PNN president Lucille Mattijssen. The problem with dubious contracts was also visible in previous years, Mattijssen explains. "But no one really felt addressed. Now suddenly you see where things are going well and where they seem to go wrong. Hopefully the institutions will take each other as an example."