More than any other university

Never before have so many researchers received a Vidi grant under the Dutch Research Council’s Talent Programme. In total, there are 101 of them. An exceptionally large number of applications were submitted too. UU is the Dutch university that scored the most grants: at least 13. The University Medical Centre Utrecht (UMCU) and the Hubrecht Institute are getting one grant each.

Eight Vidi grants went to the Faculty of Science. Karl-Barry investigates the positive interactions between plants that can help tackle climate change. Agathe Chaigne investigates why and how cells split in two. Ivan Kryven is developing a theory that allows the use of calculus for networks as well. Till Miltzow conducts research into solutions to certain algorithmic problems. Marta Pieropan researches fano varieties. Wioletta Ruszel studies the surface structures of crystals. Frederik Verweij studies how our organs communicate via small nano-bubbles. Finally, Daan Weits investigates why plant stem cells do not like oxygen.

In addition, two grants will go to the Faculty of Humanities: the winners are Robert Flierman and Dorothea Gädeke. Flierman conducts research into letter art and letter execution in early medieval Europe, while Gädeke theorises the concept of freedom and how it relates to the experience of lack of freedom.

Other faculties
Lisette Hornstra and Caroline Junge, from the Faculty of Social Sciences, will both receive a Vidi grant. Hornstra investigates how teachers in primary education, through their daily interactions with students, strengthen or reduce the differences in socio-economic and cultural backgrounds in the long term. Junge conducts research into a better prediction of language development, in which brain, child and parent characteristics are integrated.

Eva Knies from the Faculty of Law, Economics, Governance, will also receive a Vidi grant. She investigates whether people management has unintended negative effects on the performance and well-being of employees. Andras Spaan receives a scholarship at the UMC Utrecht. He investigates inborn errors of immunity in people suffering from severe staphylococcal infections. Finally, Hubrecht Institute's Garaycochea group will receive a Vidi grant to research metabolism that attacks DNA.

Applications galore
In 2021, no less than 625 researchers competed for the grants for experienced researchers, which are worth up to 800,000 euros. That is the largest number of applications received since 2011. Only 16 percent of them were actually awarded a grant.

In 2020, at the start of the coronavirus crisis, only 402 researchers tried to obtain a Vidi grant. That dip might explain why there were so many more one year later. 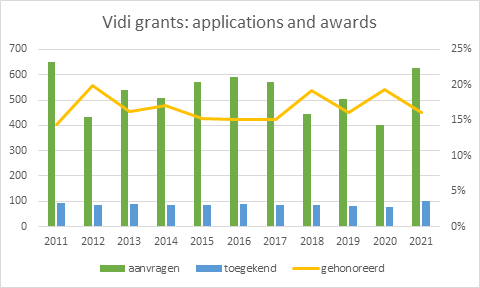 The 101 winners can use the money to set up their own research group over the next five years. They will carry out research into a variety of subjects, such as a loss of smell after suffering from Covid-19, the influence of plants on climate change, and the opportunities for entrepreneurs with a physical or cognitive impairment.

Number of Vidi grants per institution