Forgot your tampon? Get one for free at a UU reception desk

As of this semester, Utrecht University provides menstruation products to those who need them. Tampons and pads are temporarily available for free at four FSC Service Points. On the international campus, students can pay for whole packages that can be acquired from a non-food vending machine. A good initiative, but maybe a bit embarrassing when you have to ask for it, students say.

“Do you have tampons or menstrual pads?”, I ask the man sitting at the reception desk of the city centre University Library. Due to my facemask and the anti-Covid plexi glass screens, he can’t hear me well. “Sorry, what did you say?”, he asks me. “Can I get tampons or menstruals pads here?!”, I yell through the busy entrance hall. The man looks confused. I point to the poster on the plexi glass: an image of a big black droplet and an explanation of the pilot initiative. “Is this an FSC point?” I ask, looking around. There are no signs. “Yes, yes…”, the man says, and starts rummaging around. I explain that UU has started offering menstrual products at FSC service points, which is clearly new information for him. Eventually he finds a box of tampons and puts it pontifically on the desk. “Thank you, now I know about it too!”, he says, kindly.

Last year, Lijst Vuur asked the Executive Board to provide UU-students with menstrual products. The Board responded positively, and this year Lijst Vuur members Chiara Stam and Rémi ter Haar have further addressed the project together with the Facilities Service Centre (FSC). According to Chiara, the service is highly needed. “Sometimes you suddenly get your period when you’re on campus. You could go to the bathroom and put a wad of paper in your underwear and hastily return home, but that might cause you to miss your lecture. I think it’s bizarre that menstruating can lead to missing lectures. Getting your period is bad enough by itself – it’s good that the university can alleviate this issue somewhat.” 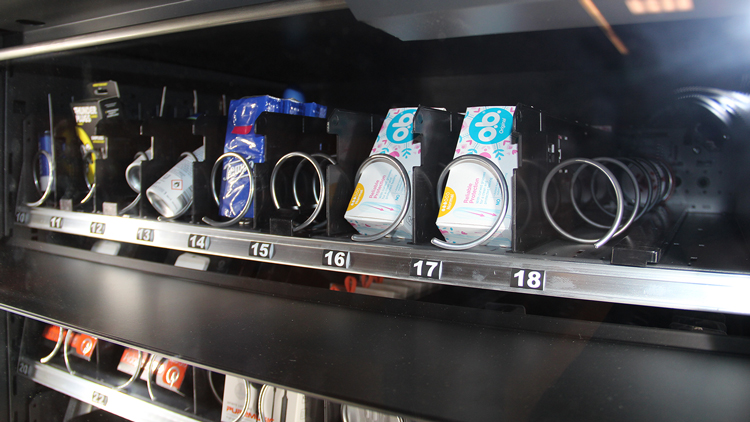 Trial period
The initiative’s trial period started in the third semester and will last until the summer. The FSC service points that provide menstrual products are the reception desks in the city centre University Library, the Educatorium, the Androclus building and the Victor J. Koningsberger building at the Utrecht Science Park. On the International Campus Utrecht (ICU), no free menstrual products are offered, but students and employees can pay for tampons and period pads at the non-food vending machines in the ICU’s Dining Hall. The non-food vending machine was already planned: “We were able to add the menstrual products”, Chiara says.

A user survey, in the form of a short, online questionnaire, is also part of the pilot. The questions address, among other things, the quality and price of the products. After the pilot, Rémi, Chiara and the FSC will examine the questionnaire results and evaluate the pilot. They will also discuss the project with the Executive Board.

UU’s approach differs from the one employed at the VU University Amsterdam, who was the first Dutch education institute to freely offer menstrual products last year. The Student Union SRVU placed a cabinet with tampons and period pads in the VU. At UU, you need to ask for the products at an FSC service point. This change was adopted following the advice of the FSC.

Barrier
“I don’t think it’s very convenient that you need to ask for it”, says Sara, who studies French. “I think that’s a barrier. I would just put up a little cabinet in the bathroom, so that you can just get it there.” Literature students Dona, Sasha and Lena agree with this idea. “That is slightly less awkward than having to ask at the desk”, Sasha says.

Chiara understands that asking a service employee for menstrual products can be a barrier for some. “If people think it is an obstacle, we’d love to hear that through the user survey. I think it’s nice that the products are offered at all. The service employees have been briefed on the pilot. It also breaks taboos to ask for the products.”

The students at the city centre University Library are relatively positive about the initiative. “It’s eliminated the stressful feeling you get when you think you’ve forgotten them”, Lena says. Male students, such as PhD candidate Bart, are positive too. “I think it’s good to make menstruation less of a taboo subject.”

Florien Kijlstra, a teacher at the Bachelor’s programme Media & Culture, and an employee of the UU’s Dutch Research School of Gender Studies, thinks the pilot is a “really great and necessary initiative, mainly to combat period poverty. Menstruation is a general taboo, but period poverty is discussed even less. Offering menstrual products makes the university more accessible for those who have little financial means. For them, menstruation now won’t have to be something that stops you from going to the university library or lectures. Aside from that, the initiative gives a clear signal: menstruation is not something to be ashamed about.”

Non-food vending machine
Except for the FSC pick up point pilot, there is another, related pilot going on: the non-food vending machine. At the moment, there is one such a machine in the University College Utrecht’s Dining Hall. It is funded by UU. Aside from menstrual products, bicycle lamps and ear plugs are also available in the vending machine. The reason you need to pay cost-price for the products here, is that you can get an entire package of tampons or period pads from the machine, instead of a single product. 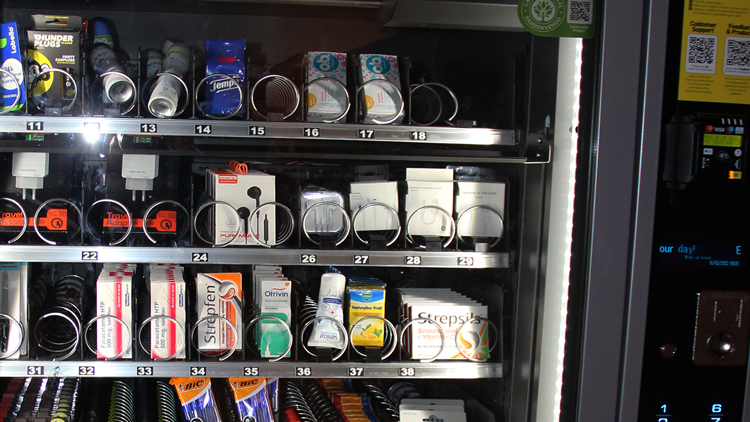