International students more likely to drop out than Dutch students

Dutch universities attract more and more students from abroad, which has advantages and disadvantages, states the Inspectorate of Education. Internationalisation can contribute to a good learning environment but also puts pressure on the quality and accessibility of education in the Netherlands, not to mention the pressure on the already scarce housing market.

In light of this situation, the inspectors think it's relevant to ask whether the Netherlands really is the right place for these students. To find out, they analysed the results obtained by undergraduates since 2011, subsequently summarising the outcomes in a fact sheet.

No difference
It turns out that 17 percent of international students leave the Netherlands in less than a year. It doesn't matter whether the students come from a country in the European Economic Area (EEA) or not. Maybe they continue their studies in another country, but there is no way to know that as there are no figures on the subject. That's why the Inspectorate calls them all "drop-outs". 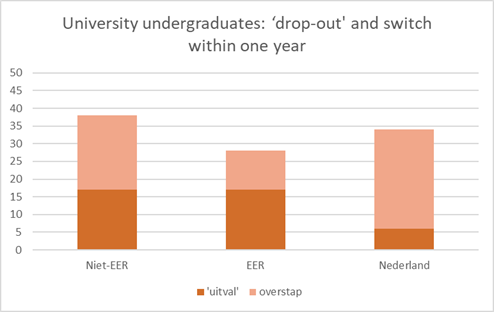 Image: courtesy of HOP. Source: Netherlands Inspectorate of Education, 'Drop-out: from higher education in the Netherlands'

So, roughly a third of the students do not choose the right study programme straight away, notes the Inspectorate. Non-European students are slightly more likely to switch programmes than Europeans, while Dutch students are between both groups. 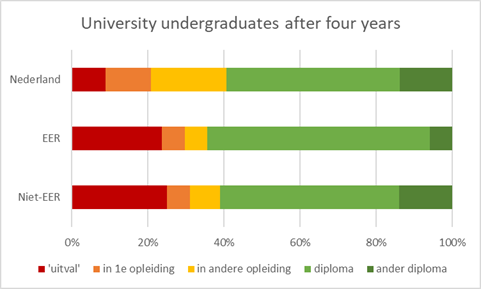 Image: courtesy of HOP. Source: Netherlands Inspectorate of Education, "Drop-out: from higher education in the Netherlands"

The inspectors are unable to say why so many international students leave the Netherlands prematurely. “This may have something to do with the institution or the study programme, but it is equally possible that they simply don’t enjoy studying abroad.”